Today we go to the lighthouse, which used to be Wednesday, and shows me that things have changed. Otherwise I would think that I had been here only last year.....but that is not really true. Though the place has remained the same and the context remains the same, the same people are different. They have become the old ones who now are no longer there, and there are new young ones. They walk behind us, helping with easels, taking elbows over rough ground, offering erasers. We stay on high ground, near our cars, under umbrellas, choosing places to paint based on proximity to shade and comfort. They go where the view is best. The new young people are more health conscious, though, I notice, using sunscreen to protect themselves from burning. They worry more about their health.

Anyway, we are having a wonderful time and have grown accustomed to the area enough so that most of the time we don't get lost. We can find the market and get home to Lorraine's making all the right turns. Lisa drives like a native now, bursting onto the rotaries with an agression not necessary in Maine, and other drivers make room for us, also unecessary in Maine. Here you are yelled at for waiting. In Maine you are yelled at for NOT waiting. It takes a few days to adjust. Betty Lou still comes across with her inspiring demonstrations and critques, making us glad and proud to be artists. Both of us are pretty much favored with praise, keeping our spirits high and our entusiasm at fever pitch.
Posted by Cheri Walton at 11:43 AM 2 comments:

It was a very hot day in Rockport yesterday and we sweltered as we stood at our easels under the hazy sun. Lisa discovered that she had left her paints at home in Eastport, so things got off to a rough start. Betty Lou gave her a palette of her own, though, and it must have inspired Lisa because she did a wonderful painting. Mine was not so wonderful, but I was not discouraged. I knew I would have trouble getting going.

Betty Lou's demonstration was very inspiring, just as I remembered them all to be, even though the painting did not come out. Her process is fascinating to watch and reminds all of us of what we should be doing, what we should be thinking, as we paint.

After the day of painting and the critique, we rode around Gloucester and then returned to Lorraine's to cook dinner. Lisa and I had bought the makings for a spaghetti dinner, buying the ingredients in the miserly way of the trip. We are both on very limited budgets and count our pennies at the doorway to every store to check the condition of our finances. We have trouble controlling our spending, resisting with difficulty the urge to empty our pockets into the cash registers of the nearest gift shop and worrying about the trip home at a later date. We blanch at the price of gas each time we stop, as if we had just climbed out of the fifties and are surprised to see that times have changed.

It's time to leave for the second day of painting now. We have very prudently found our way to the new site already on our ride last night and should have no trouble getting there. So far we have gotten lost an average of twice a day. This may or may not improve.
Posted by Cheri Walton at 11:00 AM 1 comment:

Here we are in Lynn, Massachusetts, getting ready to go to Rockport for our first day of Betty Lou's workshop. Lisa and I have been planning this trip ever since the middle of the winter. I wondered if it would really happen, since I have been so loathe to leave the dogs that I haven't been on a trip for more than seven years. Jesse and Sabrina agreed to babysit for them, and I made the plunge, albeit with considerable trepidation. Saturday we loaded Lisa's van and set out on our adventure. After eight increasingly traffic-infested hours of driving, we arrived at Lorraine's apartment to a warm welcome and dinner at the Tides restaurant in Nahant.

Yesterday Lorraine took us to the Peabody Essex Museum to see a show of paintings of summer in New England, and then in the evening we drove to Rockport for a get-together of the students that will be in the class. The entire experience has been full of nostalgia for me, with everything looking and feeling so much the same as it used to that it is as if all the years in between has never happened. Betty Lou has gray hair now, and has put on weight, but she has that same dreamy look and those same inspiring words. Her beautiful paintings hang around the romm as they always did, though the images are different now, challenging us all to try to measure up to them. Rockport is wonderful as ever with its expensive houses and rose-covered fences. The ocean stretches out to the horizon here, unlike Eastport, and is dotted with sailboats, lined with sandy beaches. Outcroppings of rocks are gentle and accessible, providing places where one can walk down to the water and throw a ball for the dog beneath a pink-streaked sky. Above them, manicured lawns and park benches perch above the scene and iron fences atop cement walls protect anyone from falling. Seaweed doesn't dare grow here. There are no lobster traps or buoys. It is the ocean prettied up by the human race, not what we are used to, and we are in awe.

Now we are ready to go back with our easels and paints and paper. We will see what we can do.
Posted by Cheri Walton at 7:48 AM 1 comment:

How DO those chickens keep getting out of their pen? The rain finally cleared today so I let them out this morning. I was gone for a few hours, but when I came back all was well. Then later my neighbor, Doug, knocked on the door. When I answered it, Lytton escaped. I couldn't see where he went, and Doug was talking to me about the title to the Capitalist Pig Car, which I have given to him. Within seconds I remembered the chickens and left Doug standing there while I hurried to the back yard. Of course Lytton was there, running around the outside of the fence chasing the chickens. He wasn't able to get inside the pen, but he probably would have found a way shortly. I called him as if he would come to me, but of course he didn't. Then I saw New Esther near the trees, outside the pen. Lytton hadn't noticed yet, and I tried to sneak up on her to grab her. After several failed attempts, Lytton finally saw what was going on and took off after her. I ran after them both, fell down in the wet grass, got up and resumed the chase. New Esther kept leaping into the air to avoid Lytton's jaws, but eventually he caught her.

By the time I caught up to them Lytton was biting her repeatedly and she was on the ground like a limp rag. I grabbed Lytton and carried him back to the dog yard, secured him, and went back to the scene of the assault. Poor little Esther was still lying there, feathers all around her, her feet stretched out behind her. I patted her and looked her all over. I couldn't find any wounds, although there must be some. I picked her up and carried her back to the chicken house where the other chickens were hiding. When I put her down, she walked off with a slight limp. I went back to the house for feed, and when I came back she joined the others in a feeding frenzy, looking perfectly healthy. I only hope that she didn't suffer any serious injury.

There are times when I just can't believe that this keeps happening, but I suppose dogs and chickens just don't go together. And try as I might, I can't seem to secure the chicken pen, or keep the dogs from escaping. After today's event my hands were shaking and I felt weak with relief that nothing worse had happened. There is something in me that won't give up, though, and I will keep trying to keep the chickens safe. I can't help but think that they still have a better life with me than they would otherwise have, even with the danger. The place they came from was hell, and if their lives end up being shorter, at least they had some time to be comfortable and happy.
Posted by Cheri Walton at 11:50 PM 1 comment:

It didn't take me long to decide about the new look. Don't like it.
Posted by Cheri Walton at 12:44 AM 1 comment: 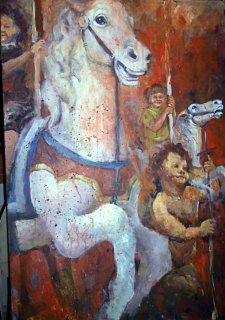