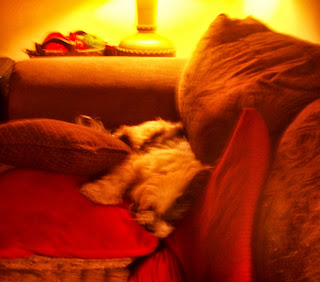 I don't know how long it's been since I posted anything, but It's been awhile.  All of my time has been taken up with Patrick, as well as all of my thoughts and energy.  Somehow he is still alive, but I have thought many times he was about to die.

There is no need to go through it all in any detail, but he has been to three different vets and none of them can find the problem..........not even Dr. Cloutier in Bangor.  I've borrowed money from everyone I thought would give it to me, shamelessly, but with ever-lasting gratitude.  Despite all of this, he is still sick.  One day he will seem to be on the edge of recovery, and the next he will decline again.

So my days have been spent watching him, offering him food, giving him medication.  I'm not able to focus on anything else.  The world revolves around the look on his face, the position he sleeps in, if and how much he eats, how well he walks.  I wake up many times during the night to put my hand on his side, feeling for evidence that he is still breathing. The time is measured by phone calls from the vet, a woman I had never met but heard about from Thom and David.  Each call sustains my hope and gives me a link to the outside, where I find an ally, someone sharing the enormity of the situation who is in a position to give knowledgeable help.

Other things have happened, probably significant, but I don't notice them.

The weather is so beautiful now that I wanted to let the dogs run on the beach.  I drove them to South Beach, where we had walked many times, and found it inaccessible.  The new owners of the property have blocked the path with boulders.  A lobster pound is being built there and apparently public access to the beach is now denied.  This is the price of the 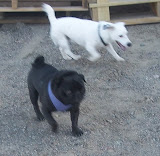 economic growth of the town.....new businesses sprouting up, "improvements" that will bring prosperity.  Luckily there is enough of the old Eastport left to allow me to still love the place, but it will eventually become a tourist destination like those coastal towns to the southwest of us........the ones we came to Eastport to escape.  Well, my hope is that it will take long enough to allow me to miss the full transformation.

So, without access to the beach, we walked around the parking area amidst the cinder blocks, machinery, enormous walls of concrete, and gigantic truck bodies.  Willy escaped from my grasp and disappeared behind the skeleton of a

building. Patrick and I hurried after him and eventually I captured him. As we rounded the corner back to the parking lot a car drove up and a woman I recognized from my morning walks got out. She, too, was hoping for a walk on the beach with her dog, Eric. We made the best of things by letting the dogs have a good, noisy romp together. I had brought my camera expecting to take pictures of the water, so I could photograph the happy boys playing together. We humans frowned and lamented the loss of our beach, but a parking lot is as good as a beach as far as the dogs were concerned. Patrick joined the games, barking constantly, which is rare for him. Ordinarily he prefers to watch, slightly disgusted with the antics of the others.
.
This is the first time I have ever seen Willy tired, but when we left his tongue was hanging......but his open mouth was certainly smiling