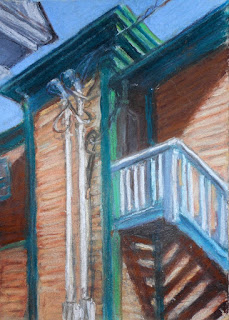 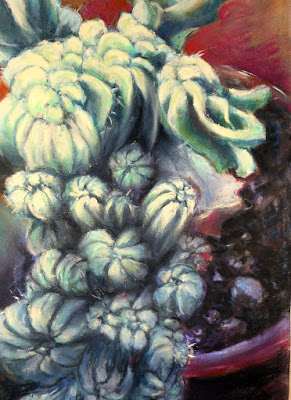 I have been busy with visitors again....you'd think I was a gregarious soul, but I am not.  Not only that, but I have another guest coming in a week, my friend Josie from Milwaukee.  Nevertheless, I've painted these two paintings.  The first is the last gasp of the series of the neighborhood around my house.  It started as  a drawing that was going to rival anything in DRAWING magazine.  I got out my pencil, erasers, and a good piece of drawing paper........also a ruler.  I should have known that anything requiring a ruler is not my forte, but I proceeded to sketch on the composition.  That was the end of that.  Despite the fact that I very much admire detailed architectural drawings, I realized that I wasn't up to the task.  I was already bored.  So, I got out my pastels and did this.  It's the house next door, with the corner of my roof in the upper left corner.

The bottom is a pastel of the cactus that sits on the floor beside my desk.  It is about four feet tall, having inched its way imperceptibly from a six inch baby that I bought in 1998.  The painting is looking down from above, but it's only the bottom half.  The two branches at the top keep on going.  I worked hard on this, to make it look the way I had envisioned.  I tend not to get a good value range with pastels until I've first driven myself crazy.  This took me two days,  It's about 12 x 16.  The top one is only about 8x10, since I had planned to work hard on every little detail.  So much for that.
Posted by Cheri Walton at 2:46 PM 1 comment: 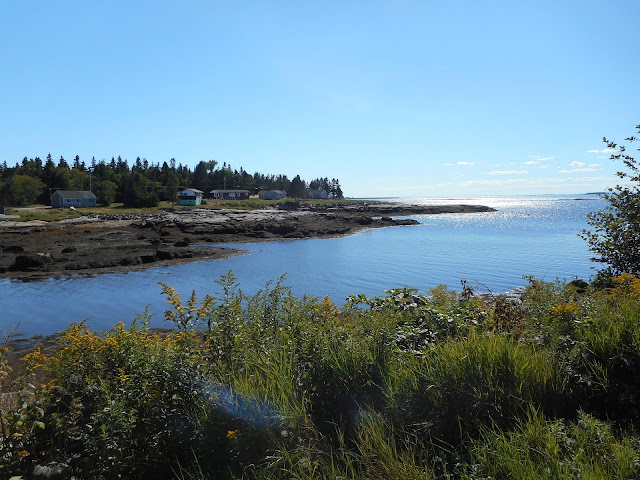 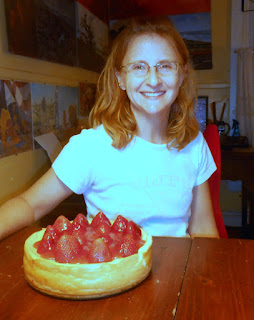 Carrie, as is her custom, came to visit for a few days over her birthday.  The pictured delicacy is the birthday cheesecake I made in honor of the occasion.  The other picture is of Great Wass Island, which is off the coast of Jonesport and Beal's Island.  When the kids were little, we used to spend time in the rented cabin in the center of the grouping. Artist friends rented the other cabins, and we spent our time painting and socializing.  Somewhere I have a picture of Jesse, about age seven, flying a kite with Richard Meredith, the husband if one of the other painters, on the lawn.  Carrie and I hoped we would be able to find the place, and when we did no one was there.  We got out of the car and walked around where we had walked 35 years ago.  It hadn't changed much from the day when John Beal, owner of the cabins, took us for a ride in his boat.  When we were out away from the shore, he cut the engine and we floated silently.  Pretty soon first one seal and then more and more started poking their heads up out of the water to look at us.  We must have stayed there for over a half hour, the seals surrounding us, as interested in us as we were them.

On the same drive we stopped at Rogue Bluff, which is a state park near Machias that I have never visited before.  What a treat it was.  I had no idea that there was a real sand beach anywhere near here.  The coast is usually rocky cliffs, but this place looked like it belonged in a far more temperate place.  We were able to take off our shoes and wade in the water.  There were some people actually swimming.  The ocean water of Maine is usually hovering in the mid thirties.  I guess this was warmer because it is unusually shallow.  Normally if you step off a rock here you are already over your head.

It was a very nice visit.  It's hard to imagine that I have a daughter who is 44 years old, and she is still as delightful as she was as a little girl. 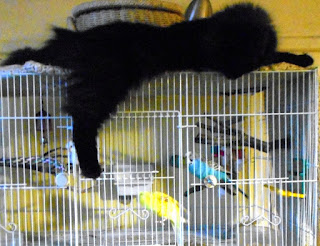 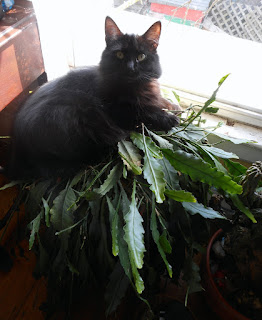 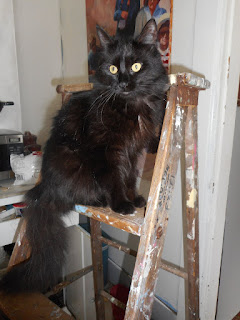 There's no cuter kitty than Leah.  Obviously I had to give up on the bird -cat problem.  Eventually the birds got used to her looming presence and she spends a lot of time sleeping on top of the cage. I have learned that it's impossible to keep her out of anything.  She is incredibly athletic and can climb like a monkey.  She makes herself comfortable everywhere. 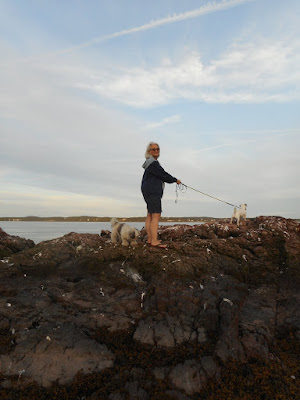 This is my friend Nancy, visiting from Indiana, walking with the dogs down on the beach.  She and I were office mates in the social service department of the psychiatric hospital in Bangor in the late 60's and early 70's.  We both stopped working and had children at roughly the same time.  Hers came first, just in time for me to borrow her maternity clothes.  Then Carrie inherited Leslie's baby clothes.  She had her second baby, a boy, just before I got pregnant with Jesse.  Our lives continued more or less in tandem for a number of years, full of the stress of little children, unhappy marriages, depression.  We had each other, though, and there were wonderfully intense times of mutual support as well as fun and laughter.  She and her family moved to Indiana when the kids were still little.  We have talked a few times over the years by phone, and somehow remained close despite the lack of contact.  I was delighted to have her actually come to visit.

Our lives have taken strikingly different paths.  We have both divorced (she twice), but otherwise we have little in common besides the past.  She is retired now, but has spent her life building her own business.  She has acquired more money than I will see in my lifetime, travels the world, loves socializing and dating.  Nevertheless our connection was still there and we visited as if we had seen each other yesterday.  She bought two of my paintings to take home with her.  We parted with promises to see each other again in the near future.  That probably won't happen, but I'm so glad we had this time to reconnect.
Posted by Cheri Walton at 3:21 PM No comments: 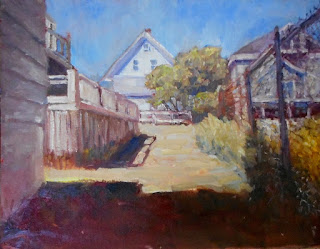 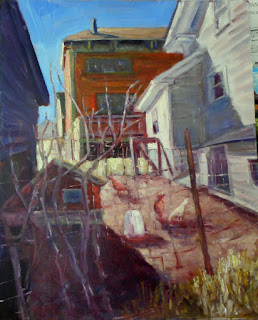 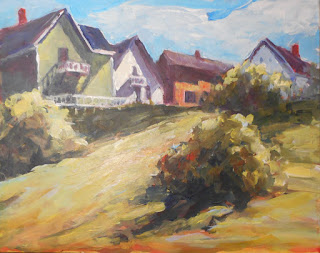 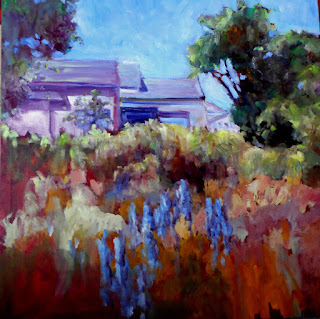 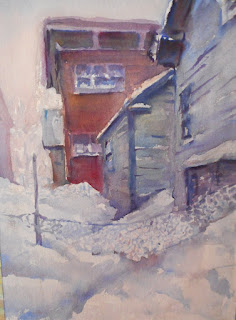 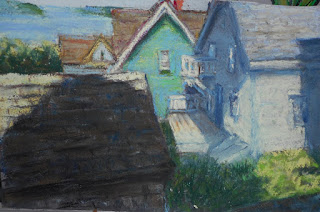 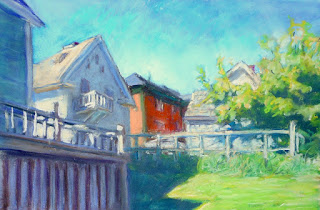 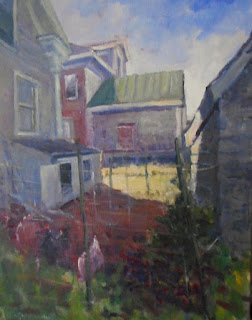 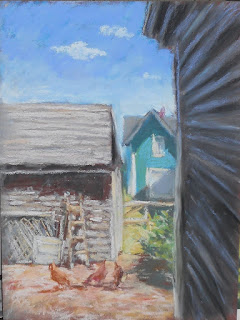 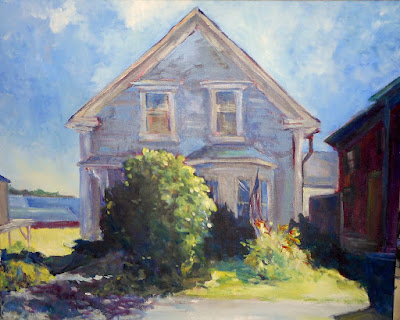 It has been some time since I've written, and I'll not bother to explain.  Obviously, though, I have been painting.  These are all done from photos I took around my house, most of them on a single day.  They are of various sizes and done in different mediums.  I intended to label them, but I don't have the computer skills to do it.  In any case the last one is the biggest, around 24 x 30, and was meant to be the signature piece of the series.  I kept going on, though, so I don't know if it will be or not.

The summer has almost past, mostly without my noticing.  I've spent a lot of time working around the house in anticipation of guests.  It's been tiring, a fact I can't quite get my head around.  Until the past year or so, I didn't really know what it was like to have to pace myself.  My energy seemed boundless.  I regret to say that this is no longer the case.  There's no doubt that I am getting old.  I have had to learn to stop before the end of a project and pick it up again later.  I must say it is a more sensible and comfortable way of doing things than my former obsession to finish almost any task without stopping, no matter how long it took.  Well, that's me at 71.


Posted by Cheri Walton at 7:31 PM No comments: