Three of the six chickens arrived and I went to Machias to pick them up. It's a cold, rainy day, so I turned the heat up in the car as high as it would go. I read last night in my desperate attempt to read everything I could about raising chicks that they need to be kept warm. Until two days ago I thought I was going to get half-grown chickens. What a surprise when I realized they were babies 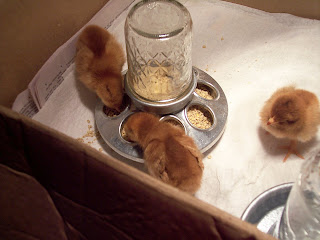 . I had to educate myself fast, so turned to the internet. On the way to get them I went to the local (sort of) feed store and bought what I had learned I needed. So I set up the "brooder," aka a cardboard box, on the bureau in my studio because the slanting ceiling offered a good place to hang the heat lamp. I read several suggestions for flooring, and chose newspaper with paper towels over it. The newspaper is too slippery to walk on, but provides padding.

The chicks are only four days old, and the cutest little things in the world. These are the Rhode Island Reds. The Barred Rocks will come next week. I've got names for them, but I'm trying not to let myself think of them that way in case they die. Some do, I've learned. Two of mine are very robust, with great appetites. The third one is smaller and looks under the weather. She hangs back and doesn't eat or drink as much as the others. She is always being bullied by them. I am fervently hoping that dealing with chicken death again is not in my immediate future. So far I have gone upstairs to check on them every five minutes. So far, so good.

I am a nervous wreck.

Horses in Oil Paint, Death of a Tree 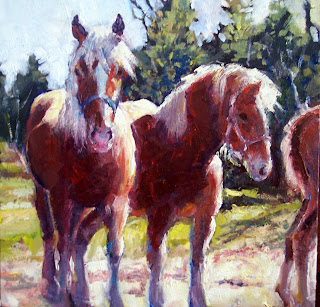 Well, of course I had to do the horses in another medium. I was wondering if oil would be better at capturing the backlight I'm so fond of. I think that it did, though I'm not sure it makes a better paining. I guess I'll just say that both have their good points and their bad points.

As I walked the dogs one day last week I saw that a massive tree that was beside Dog Island Pottery had been cut down. There was nothing left but a stump and a lot of trunk sections and branches of various sizes lying around. The hole left in the landscape is very intrusive, changing the shape of the sky from delicate lace to a blast of exploding light. It used to be that the shadow of that tree decorated the road, too. It looked soft underfoot, cool and dappled. Now a uniform flat square of gray pavement has replaced the pattern.

Ten years ago I painted that tree in winter, the blue shadows on the snow reaching out toward the viewer. That, too, was backlit, and the sun squeezed out between the branches and around the trunk. There were several smaller trees, birches, that stood close by, casting supporting shadows. It was never one of my favorite paintings, but I was fond of it. Now it's all that's left.

The day after the tree was cut down, some giant machine pulled up the stump and roots, then flattened the ground where it had been until nothing remained but tread marks from the oversized tires. Against the nearby building were several stacks of neatly cut logs. They were amazingly uniform. As human beings love to do, each log had been make tidy, fitting perfectly against its neighbor.

All I could think of was so many steaks wrapped uniformly and displayed in rows on the meat counter at the grocery store. The cattle had met the same fate as the tree, killed, chopped up, trimmed, and readied for consumption. We like to make things prettily distant from their source before we use them up.

Posted by Cheri Walton at 8:01 PM No comments:

I've been working on this puzzle for several weeks and finally finished it. It was difficult because of the similarity of the pieces, both in subject matter and shape. I almost gave up, but that isn't in my nature. The only consequence of the degree of difficulty is that I'm not particularly anxious to start another one. We'll see how long that lasts. It could be that I'm over this particular obsession 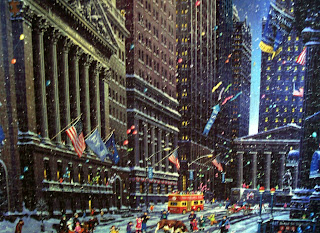 I lost a few pieces of this puzzle, which is to be expected, and the dogs chewed a few more. All in all, though, the completed picture was worth a photo. Since I will now take it apart and put it back in the box, the photo is a little like an Andy Warhol painting in that the image will supercede the real thing......so what happens to reality?

Posted by Cheri Walton at 7:16 PM No comments:

I keep wanting to paint more pictures of the horses at the farm on Leighton Point Road. Here are the latest two. I am totally entralled with them, especially the top one, which I did at Diana's house yesterday and today. She is in Eastport for the gallery meeting, which will take place later today. Since it's only 45 minutes away, I need to make up an agenda post haste...... 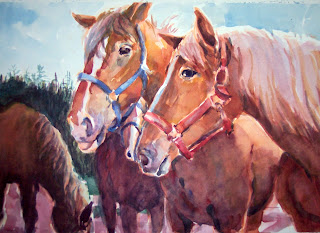 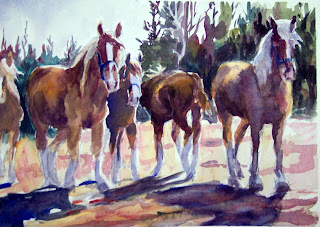 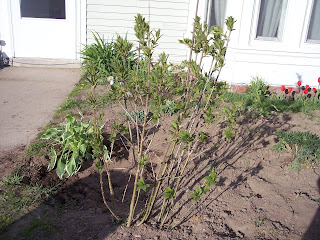 Posted by Cheri Walton at 11:21 AM No comments:

Progress in the Garden 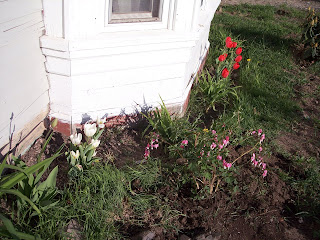 Here are a couple of pictures of the garden as I collect things from areound town and replant them. There is more than what you see here, including the lilac, which is doing beautifully, but I love the tulips. I bought the Bleeding Heart 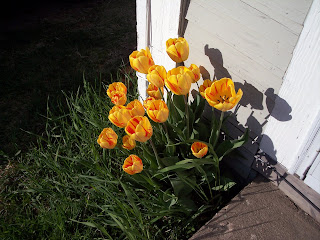 yesterday, knowing that it is almost done for the season. Next year I will be able to watch it sprout and grow.

I am still eagerly awaiting the arrival of my chickens. They should be here at any time. Yesterday I brought home an old ladder from Toni's that was lying on the ground outside her kitchen window. She said her grandfather used to use it to climb up to inspect the fuel gage. It's been lying there for fifty years or more. I put it inside the chicken house where it will make a wonderful roost.

Posted by Cheri Walton at 11:18 AM No comments: 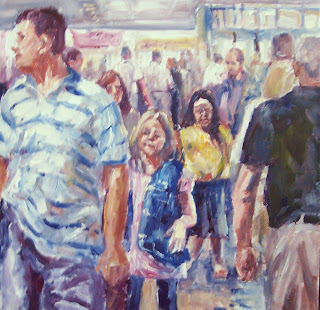 I decided to use oil this time for another crowd picture. It's from another of David's boat show photos. I worked on it yesterday and today, and I think the watercolor influence is quite evident in it. That appeals to me, since I like the look of the watercolor, but also like the texture of the paint when I use oil.

Yesterday Marshall had to replace the water heater downstairs. I called the electric company after I received a bill four times what it usually is. The customer service person told me to check the water heater. When I looked at it I could see water leaking from two places. I called Sue, my landlady, and she called Marshall immediately. I am fortunate to have someone who responds cheerfully and promptly to me as a tenant. She called to check several times on the progress of the repair, and again today to make sure all was well. There are a lot of people who make my day to day life so pleasant and free of conflict, and she is one of them. A lot of renters have trouble making their landlords respond to their problems. Thankfully, I'm not one of them.

I've painted the door and window trim on the chicken house. Now I need to put up the fence. A little work is still needed on the inside since I told Will not to make the nesting boxes. I like the idea of contributing something to the construction. I would like to have built the whole thing myself, but I just couldn't picture doing it.......and I'm sure I made the right decision.

Posted by Cheri Walton at 4:54 PM No comments:

When I was looking at a possible house for Mike I took a picture of these horses and their owner, Bob. In fact, I took a lot of pictures, and I'd like to paint several of them. I did this yesterday at Sydney's. I's small, only about 6x8, and I really love it. I'm tempted to try it, or another one like it, in oil, yet I still feel drawn to the watercolor. I'm almost afraid that if I give it up, even temporarily, I'll lose it again. It's hard for me to just do something without analyzing it, fussing about its implications and consequences.

I'm going back to look at the house again today 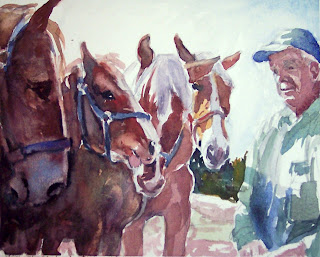 and may get more photos, though it's raining and not a good day for outside shots.

Spring is Busting Out All Over 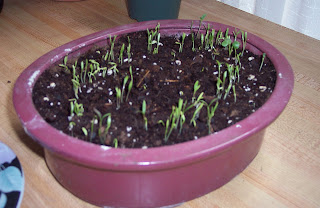 The three lily bulbs I bought have appeared, and the cilantro seeds have sprouted. With chicks coming and plants growing, the winter has already become a dim memory 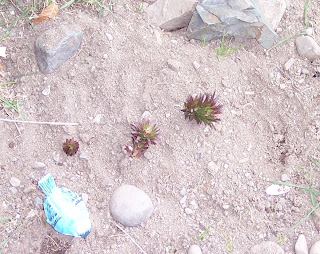 . How fast we adapt, and the present is all there is.

Posted by Cheri Walton at 3:44 PM No comments:

I now have the Taj Mahal of chicken houses. The six birds I have ordered don't know it, but they are very lucky (as long as I can keep them safe). Not only is it gorgeous outside, but it's well furnished inside, with roosts and nesting boxes. It is also portable, so if I ever have to move(heaven forbid) I can take it with me, albeit with some difficulty. Now I will have to work on making a sturdy fence to keep them in and others out. I hope I have seen the last of murdered chickens.

Posted by Cheri Walton at 3:37 PM No comments:

Two Versions of the Same Thing

There was a picture in the paper the other day of people at a funeral for a soldier who was killed in Iraq. I cut it out to use as subject matter. Because of the subject I thought I'd try a monoprint. I had all kinds of trouble getting things together.......couldn't find any actual tools or ink 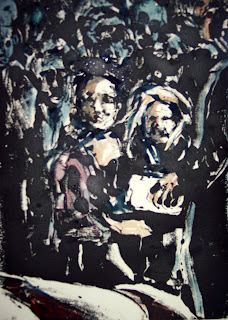 and had to improvise by mixing dried up etching ink mixed with IGA vegetable oil. I used to use Q-tips as my drawing instrument, but I had no Q-tips and substituted paper towels and charcoal blending stumps. I couldn't find any plexiglass, so took the glass out of two frames, one to roll up the ink and another to make the print.

The consistency of the ink mixture would have made my old print-making teachers cringe, but I forged ahead. Since I have no press, I planned to rub the print, using my favorite doorknob that I had for woodcuts. Since I was using real glass, I thought I should get a healthy coat of ink on it so I could transfer the image without needing to use much pressure. 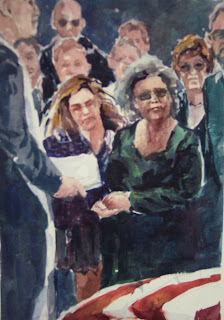 When I started to pull out the image, I knew I had gone overboard. The ink was so thick it was hard to scrape it down to the glass. I knew then and there that it would all close in on my marks when I rubbed it. Nevertheless, I did the best I could with the tools at hand and hoped for a miracle.

Well, all the faces I made in the background mostly fused into unrecognizable shapes, but I had two that were pretty much intact. Once the ink dried (an eternity since it was so thick) I was able to doctor it a little with watercolor. I subdued all the goulish looking shapes in the background and put some subtle washes on the figures. Thus organized, the marks made some sense and I was happy. There's nothing like a print to put an idea across.

Next, I made a watercolor painting of the same subject. I like it, but it looks mundane compared to the print. It adds one more element to my already confused sense of myself as an artist. Does technical ability trump raw emotion? I don't know.