Another experiment......first the watercolor painting, then the same painting doctored with pastel. The difference between the two are not very obvious in the pictures, and now that the watercolor doesn't exist I can't tell how much the pastel changed the original. I guess I like the painting......it's a picture of my favorite corner on 186, or 182, going the back way to Machias through the blueberry fields. 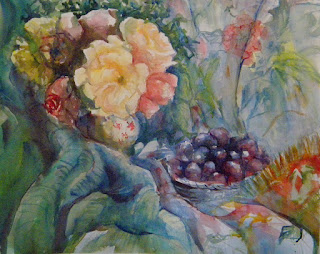 I like this version of the still life I did the other day much better than the pastel. Nothing is quite as brilliant as watercolor, and I have to say, modesty aside, I am good at it........

Play Date at the Beach 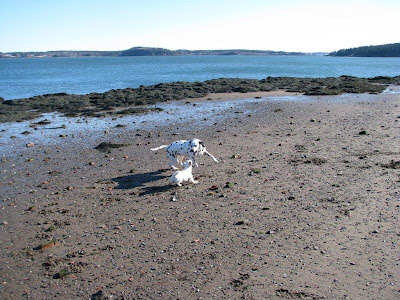 Dylan and Willy are so cute together I just have to post a couple more pictures of them playing. 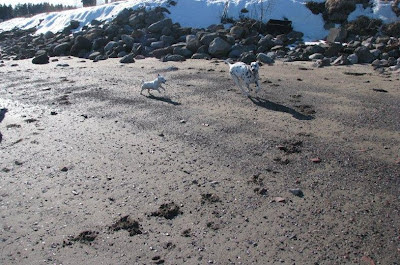 It was a frigid day, but both of them charged into the water at a dead run. Willy was over his head before he knew what hit him, but he swam like a pro. After that, whenever Dylan went into the water, he declined to follow, but stood at attention at the edge until Dylan returned. When we got home, I gave Willy a hot bath, both to warm him up and get the mud off him. I don't think he's had a bath before......he struggled to get away at first, but settled down after a very short time and even seemed to enjoy himself.

There's no doubt that Willy is a charming creature, cute and self-confident, funny and smart. He seems to fear nothing. I can't help but love him, but he still seems like a visitor to this household, or perhaps an adopted child from another country. 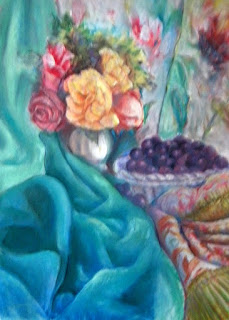 It's not hard to figure out what I liked about this still life. I've always loved to do drapery. I saw this picture in a decorating magazine and was intrigued by the different kinds of cloth in the picture. Sydney had just given me a small box of hard pastels, so I forced myself out of my stagnant routine and tackled it. It is fairly big, 18x24? and looks better in the picture than it really is. I've spent time for three days on it and have decided to call it finished. It was a good reminder of why I have trouble with pastels.....I can't get the range of values that I like. Pastels are all about color, which doesn't intrigue me in the least. Of course the subject matter is bland as well. I started at the bottom, and once I had done the big blue-green drape my fun was over. The flowers were nothing but drudgery and the other drapes weren't intricate enough to hold my interest. With a subject as unexciting as this, the technique really has to be interesting, and although I tried at the end by putting charcoal lines here and there to clean up the edges, it was too little too late.

I'm not sorry I did it because it took up some of the seemingly endless empty hours that at this time constitute my life.

I can't help it...here's some of Thom's pictures 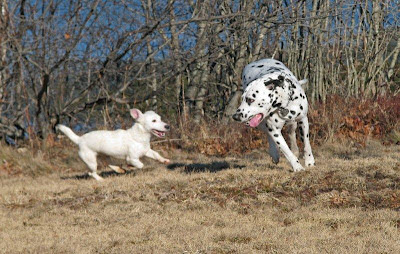 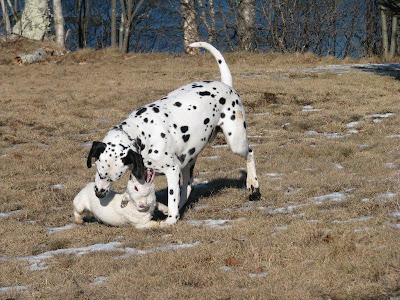 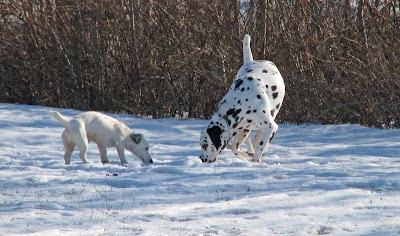 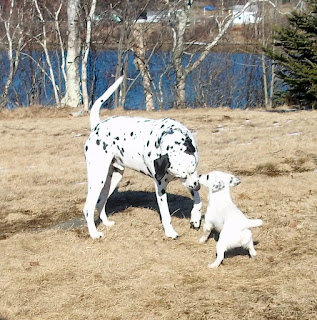 David, Thom, and I took the dogs for a romp at the local campground. This activity has been impossible until Willy came along. The Lhasa Apsos are not interested in playing with other dogs...not even each other. On the other hand, Willy has boundless energy and a big ego. Far from afraid of bigger dogs 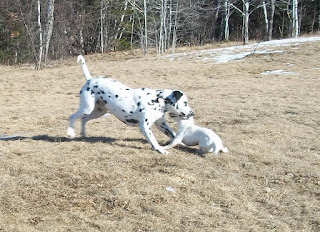 , he relishes being with them. Dylan is also a boy with lots of energy and likes to play. So the two of them spent probably twenty minutes or so running full speed. We humans finally had to put a stop to it, fearing that one or both of them would have a heart attack.

The two of them looked adorable together... 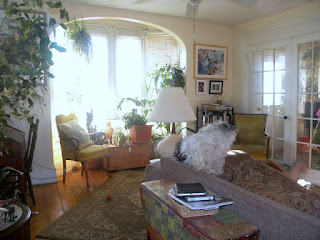 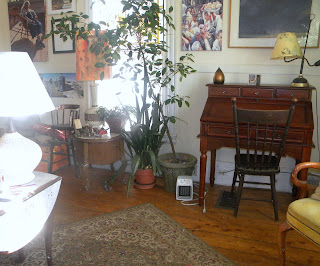 Since I lost Lytton, one of the few things I can think of to do is rearrange furniture. This is the second of the most recent arrangments, inspired by the addition of the secretary Mike gave me when he moved. What drives me most , though, is the desire for change. I've never really unearthed the reason for this compulsion, but since moving into this house I have managed to contain it to the various rooms within it. From the time I left Parkview Avenue after the divorce in 1996 I have lived in 14 different places. I have actually lived in the house I have now twice......once when I first moved to Eastport in 1997. I came in November and left in April because of my mother's illness. Then in 1999 I came back for several months, then back to Bangor again in 2000. When did I return to Eastport? I can't remember. Those were difficult years best forgotten, but since then I've been in six different places. I began this blog in 2005, I think, and I was still two houses ahead of this one. If not for the chickens I probably would have moved again, but they have put down roots for me. Not many landlords accept chickens.

So, I move furniture and revel in each change. I look forward to going into the living room to watch TV in the evening when I know I will be in a different place. I love to go to bed when I am looking at a different wall or window. Reading the paper is a treat when the breakfast table is not where it was the day before. My pleasure is not diminished by the knowledge that sooner or later, when the strangeness wears off, I will move things again. 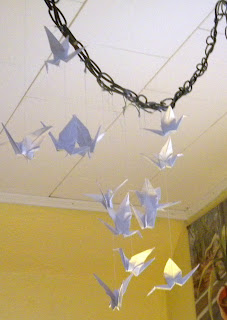 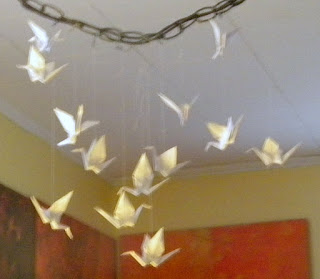 It's a rainy, dismal day so I decided to follow through with my origami project. I have planned on making a mobile out of the many cranes I made. I even bought some metal rings to hang them from. As usual, though, nothing goes as smoothly as one would like. Yesterday I put thread in all the cranes and hung them over the back of a chair. I was almost done when I mistakenly hit one of the cranes with my elbow. It sent them all spinning, and if you have ever made or owned a mobile, you can imagine what happened. The thread became hopelessly tangled. I tried for what seemed like an hour to detangle the thread, but it was implssible. I had to cut the cranes loose and start again.

This morning I tackled the project again. My attempts to tie the thread over the ring were disasterous, with more tangling and more cutting. Neither could I figure out a way to hang the ring that didn't look ridiculous. Finally I hit upon the idea of hanging the cranes individually from the chain on my swag lamp. I still had to tie knots in the thread and then attach them to the chain with little pieces of picture hanging wire. Eventually the result was as good as I was prepared to accept.

I sometimes question the way I spend my time. 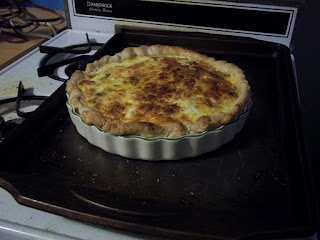 I have tried without success to use up the eggs I find in the chickens' nest. I made this quiche the other day, and then an angel cake (12 egg whites). Both were successful, but the fact is, I don't like quiche, or angel food cake. Nor do I like omelets, scrambled eggs, souffles or any other predominently eggy dishes. Every day there are from 6 to 12 beautiful eggs that I look at with dismay, pile in the refrigerator, and wonder what to do. Being the recluse that I am, I have no one to give them to but Thom and David. They do their best, but it barely makes a dent in the supply. I've thought of selling them, but I don't want people coming to the door to buy them.