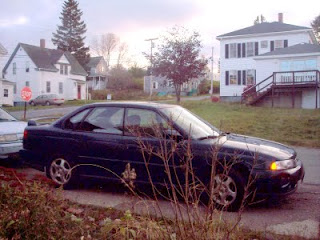 How did this car find its way into my possession? Well, it's a long story. People say that I am lucky, and I guess I am, though I must say that most of my luck has to do with having a lot of support, knowing an opportunity when I see one and being willing to take risks. In any case, I will no longer have to worry that my Ford, which has 300,000 miles, will break down at a moment's notice and leave me without transportation. Of course this Subaru comes with no guarantees, but it has only 45,000 miles on it and has been very well cared for. It seems more likely that it is the one with the longer life ahead of it. It has some luxuries I have never had, too, like air conditioning and four wheel drive. It's a pretty green with black interior, and the only part of it I dislike is the spoiler on the back end. Those things make cars look like they are in heat, or farting.

I have been preoccupied with trying to set up another blog where I will post paintings for sale. Lisa gave me this idea and she has had some financial success with it herself. I managed to get the link to the blog under my links listed here on this one, so it is available for viewing now. It's really not very interesting yet and has only paintings that are not for sale pictured at this point. I have to set up an account with ebay and paypal before I can sell anything. I'm hoping to get it going this week-end. I don't consider myself any kind of entrepreneur and predict a short and uneventful life for this new blog...........but I'm going to give it a try anyway, assuming I get around to setting up the necessary accounts. 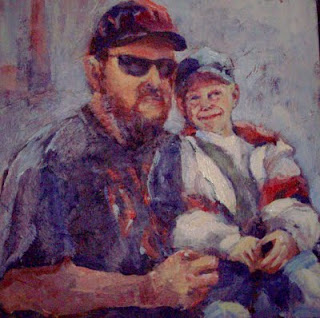 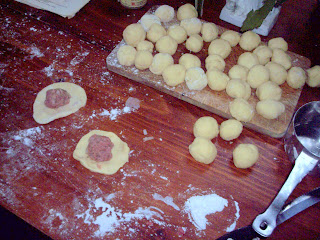 When the kids were still at home I used to spend a lot of time cooking. Pelmeni was something we all liked and took a long time to make, the criteria for a good afternoon of entertainment. It is a bit like Russian ravioli, with a pasta dough shaped into circles and filled with a meat mixture. They are then frozen on a cookie sheet and stored in plastic bags until you want to eat them.

I'm glad I have kept most of my cookbooks from that ancient time when no one ever heard of antioxidents and people were not afraid of food. This recipe came from one called "The Dumpling Cookbook." It featured many versions of dumplings both savory and sweet. Another of our favorites were Empanadas deep fried in lard....I would get out the ingredients and we would all go to work mixing, kneading, rolling, shaping, and wrapping the dough around the filling into little balls. The technique was explained in the cookbook. Even when Jesse, age four, was in a cast from his hips to his feet I hoisted him up onto the counter of the kitchen island where he sat with stiff, splayed plaster covered legs making balls of filling and dough. It was a companionable way to spend the day.

Today I thought about those times as I put myself to the same task alone. It sure was a lot easier with two extra pairs of hands.

Posted by Cheri Walton at 4:18 PM No comments: