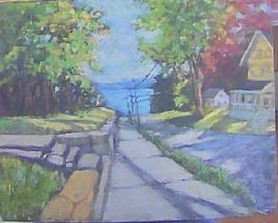 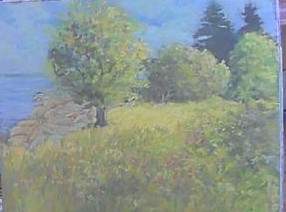 I have produced about ten new paintings over the last few weeks.  My studio is covered with pastel dust, as well as my clothes, my hands, the floor of my studio, and my dog.  As is always the case when I switch mediums my enthusiasm soars with each change.  I am partly convinced that it is the change I crave,  I am a person who constantly moves furniture, basking in the newness of where I sit in the living room, where I read, where I sleep, where I eat, what I eat.  My useless hip has not prevented me from tackling any piece of furniture (except the piano).  I seem to bask in the new arrangement for a few months, then start planning how things could be different (and better).  A few items are very hard to move, especially for one five-foot tall 76 year old woman using a walker, but it doesn't even cross my mind to leave well enough alone, or ask for help.  The TV is the worst thing.  I can't begin to lift it, so I line various pieces of furniture up between where it is and where I want it.   Then I transfer it one end, then the other, risking disaster the whole way. The couch is a huge thing, too, and don't even ask about bookcases.  Even the birdcage is not exempt, even the room where the birds live.  Right now they are in the living room having spent the last year or so in various places in my dining room-office. I have also recently moved every piece of furniture in my bedroom: bed, nightstand, two large chests of drawers, rug, two chairs.  The studio, of course is subject to continuous re-arrangement, about every week.

Well, so much for my wanderlust within this house.  I have begun to think about moving again. It seems to be the only thing I can do.  I simply do not have enough money to stay in this house.  The latest disaster involves my car repair.  I left it  at the garage in November, since I can't drive anyway.  It has been repaired now to the tune of 1700. dollars.  There is no way for me to pay that.  I only paid a thousand dollars for it, and I borrowed that from my brother.  If I move to Boynton Manor (a home for the old, poor, and decrepit)in the downtown area). Rent is based on income with all utilities included.  I will have very few of the expenses I have here....rent, heat, water, trash, plowing in the winter, etc. In fact, I haven't paid my rent for months, taking advantage of my SO WHAT? landlady who loves me.  She won't forgive me forever.  I was accepted at Boynton Manor a couple of years ago, but I decided I just couldn't leave here.  I love my house and its view of the ocean.  I will have two rooms and a bath, with a kitchen area off the living room.  The place is very nice, but so small compared with my spacious three bedroom house.

Well, I guess I caught up with the time I have spent since my last entry.  Missing is of course my troubles over getting my hip replaced.  I can't afford the several medical pre-requisites (dentistry among them) so it hasn't been scheduled.  It's been almost two years since my first surgery was planned.  Well, it's the least of my problems, I guess.  Luckily I roll with the punches.

Posted by Cheri Walton at 1:16 PM No comments: