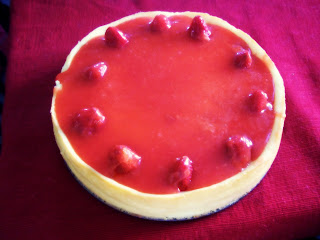 This is the first time I have given up my purest attitude toward cheesecake.  I bought strawberries and made a glaze, which I admit looks pretty nice.  I only hope that after all the work it was, I can appreciate it............and if not me, at least David and Thom.  Easter dinner is a tradition with us, despite the fact that none of us are church goers, or even believe in a deity.

I am working on this.  I want to be a Catholic.

Posted by Cheri Walton at 2:04 PM No comments: 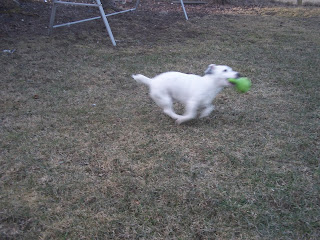 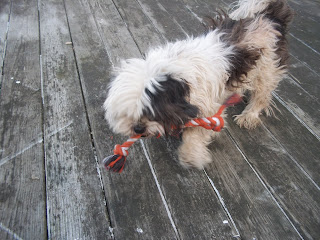 Willy and Patrick got to play outside before it snowed again.  Diana's yard next door is fenced in and they have permission to use it.  So we took advantage of the nice weather to have a romp.  The next day another snowstorm hit, almost as big as the last one.  I ran out of fuel again on the same day.  The furnace stopped working the day after that.  So we have had a little cold spell here in the house.  All is well again now, though.

I have wondered recently how much longer I will be able to afford to stay in this house.....a topic that rises to the surface off and on.  I saw that there is a vacancy in the subsidized housing building on Boynton St. and gave the idea of moving there a little chance to roam around in my head.  I have to say it roamed right back out again.  I can't really wrap my mind around giving up my dogs, my chickens, my house, my life as I have known it for so long.

Speaking of possible threats, I have to go to court again in about a week for the next chapter in Phil's attempt to strip me of my income.  I feel numb in the face of my precarious circumstances most of the time.

Posted by Cheri Walton at 8:08 PM No comments: 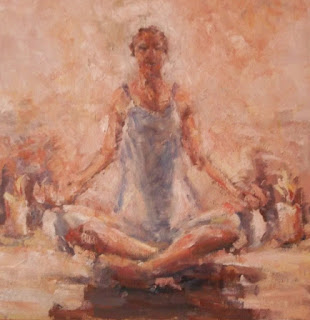 I can't seem to leave these paintings alone.  As I look at them scattered around the studio, I begin to yawn over my technique.  I kept trying to develop something different, but no matter what I did it turned out to be me.  I decided I had nothing to lose, so went back at them with tremendous bravery.  I simply can not keep doing the same thing over and over.  I am so sick of myself.

This paintings were already a little adventurous for me, but I wanted more. I blurred the edges, disguised the details, used the paint differently.  I wanted them to be paintings rather than a slightly skewed version of a photograph.  The first thought I had was to eliminate background, at least in the case of all the dancers....or I should say representational background.  Beyond that I tried to keep the figures sloppy without detail.  I fought the whole way, resisting my usual attempts to fuss over and cajole the images into static individuals.  I succeeded somewhat, but was still not happy.  Yesterday I took the offending paintings off the wall and set to work destroying what I had done.  Right now I feel pretty good about them.  At least they are not quite my usual self....though you could say they are still me, but in disguise.  There is no way to hide, but I have to believe in change...conscious change.  Every painter changes somewhat over the years as a natural outgrowth of experience.  Everyone tries to make themselves better at what they do.  I don't want to keep improving what I already do.  I'd like to make the principles I have always believed about painting 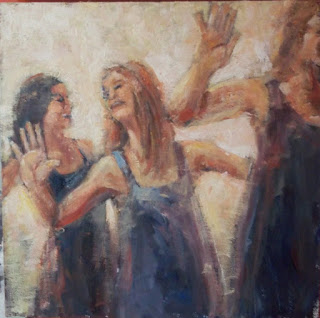 more obvious in my work.  I've preached process, evidence of medium and composition.  I've always insisted that subject matter ought to be nearly irrelevant....that a painting should not "call on predictable, automatic responses to the subject."  I read that in a book called "Living by Fiction."  I'm pretty sure it was written by Annie Dilliard.  She was talking about writing, but the same applies to visual art.  You shouldn't depend on the subject to carry your painting.

How I have spoken into a void.....my students always chose their subjects with great care.  They wanted to "capture" what they were looking at.....no matter that I pointed out that nature is itself, so much bigger and grander than their 16x20 canvases, can't be caught...........that what they were making was another thing entirely, a rectangle with paint on it.

Well, I am trying to follow my own teaching.


The last painting of the horses came to me as I was removing the huge painting I had done of horses stampeding on 24 canvases that fit together.  As I looked at each square, I was struck by how they looked by themselves.  I took this image from one of them.  The jury is still out on this idea.  The color is odd, for one reason.  I had used up all of my red paint and was finishing up what was left on my palette, mostly yellow and blue and white.  Now that I have used up my oil paint, I'll have to switch to a different medium. 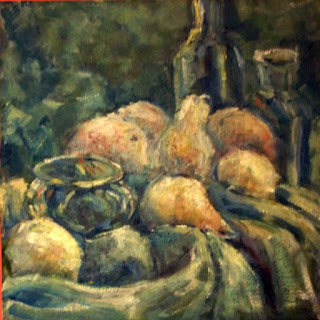 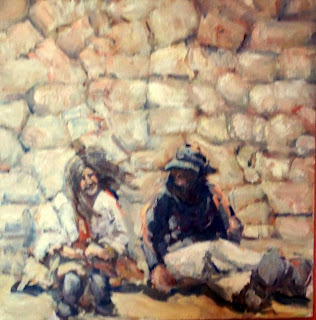 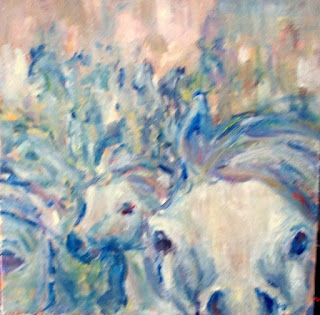 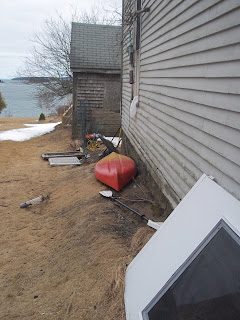 It's not really Spring, but for the time being most of the snow is gone....and tonight we turn our clocks ahead for daylight savings time.  Turning the corner from the front door this morning, though, the sight of the wreckage along the side of the house struck me as the first signs of Spring.  It's not the longer days, the greening of the grass, the emerging tulip and daffodil buds huddled next to the foundation of the house that herald Spring.  It's dirty snow, mud, and long buried trash.  In my case it is the sight of the storm door that blew off, the unused kayak and paddle(with my life jacket huddled against the porch of the house next door), the blown down bird feeder, and the chicken fence on the ground.  While the snow covers the ground these things are not visible.  Even if a loose garbage can cover or an empty bottle or even a piece of the garbage itself appears along the street, or in your own yard, so what?  It's too cold to pick it up, and anyway, the snow will cover it up.  The reappearance of everything that got lost over the winter proclaims a new day.

At this time of the year it is too soon to do anything about the mess.  There will be plenty more winter.  We make plans, though, safe behind our windows, for what will happen in another month or so.  We'll pick up the trash, replace the doors and fences, plant a garden bigger than last year, paint the steps, get out the deck furniture, buy a barbecue, throw out our old summer clothes and get new ones. We'll wash the car, repair that crack in the front walk, put up a clothesline, prune the overgrown bush.  We'll fix those screens with the holes in them, wash the windows inside and out.

This is the view from March. 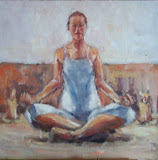 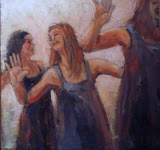 After I painted the last painting in this group two days ago, I realized that all the others I had recently done were very drab.  The old ones were cool, blue-ish-white-ish.  The last one was much warmer, more lively.  So, one by one, I brought them back to the easel and went after them with yellow paint.  I'm not sure the photographs show the difference as strikingly as it actually is.  In any case, I am much happier with them now.

I have started to make a website for my artwork, and have put the address under my links.  Don't bother to look yet unless you are interested in my "about the artist" paragraph.  The photos I have put on there so far are just my most recent, these I have posted here.  It's my intention, at least, to get most of my work on the site.  The task is quite daunting, but I will try.  Many of the works there will be for sale, theoretically.  I anybody actually wants one, I will have to scramble..........though it seems to me I did set up a paypal account at one time.  I had intended to become rich and famous selling paintings on ebay, but after one attempt I lost interest (in being either rich or famous).  Why am I making this website?  Who knows, but it seems like a thing I ought to do if I want to call myself an artist. 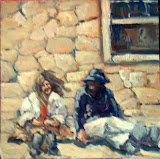 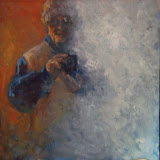 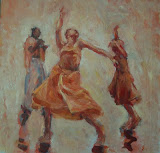 Posted by Cheri Walton at 5:25 PM No comments:

The Boys Go Back to Bed 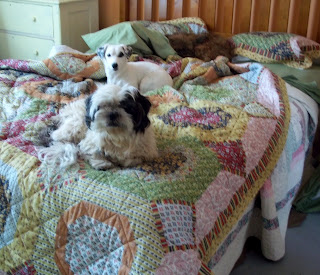 It's a wet, snowy day (again).  After our morning walk the dogs disappeared, which is very unusual.  Ordinarily they are no more than a few feet from where I am.  I went to look for them and see what they were doing.

It turned out that they all had decided to find a warm place to dry off and rest. Their feet and hair were soaked from their time outside, and my bed apparently seemed like the perfect place.  When I found them they didn't seem in to think they were doing anything wrong.  They simply looked up with mild interest as I approached.  Of course they had no reason to feel guilty.  It would never have occurred to them that I might disapprove of their behavior.....and of course they were right.  I got the camera and they managed to look up for the picture.  At least Patrick and Willy did. Benny snuggled further into my pillow without acknowledging my presence.  I will probably have to change damp sheets before I go to bed.