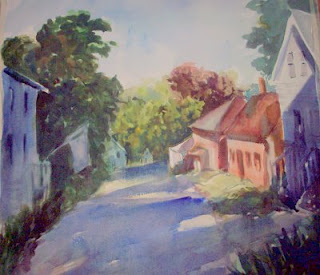 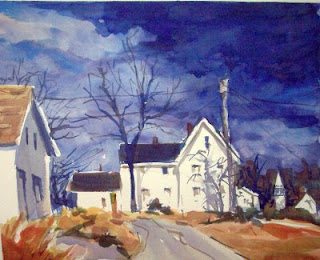 You can tell by these paintings that I finally bought a tube of ultramarine blue. I have been without it so long that I revelled in the fact that I had it, possibly to the point of over-doing. Both of these are paintings I've done before in different mediums. I can't seem to think of any new subject matter, yet I want to paint, particularly watercolor. I suppose at some point I will get interested in what the painting is of rather than playing with the paint itself.......but not now. 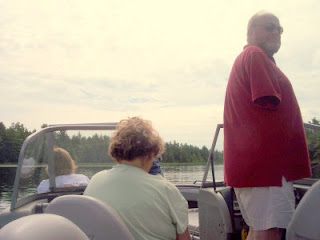 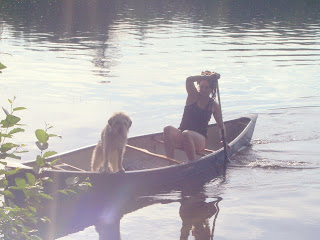 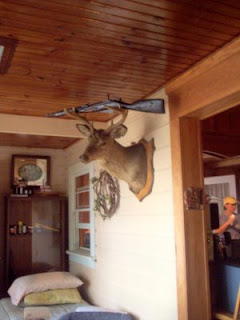 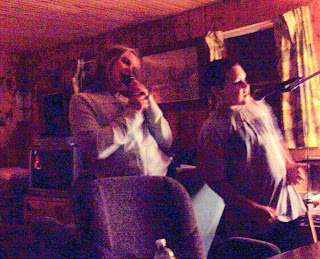 For the first time in years I left the dogs and went to stay with my old friends at their rented camp. I have known this family since I was eight years old. The original five children I grew up with have multiplied into three generations, the youngest singing kareoke in the last picture. Eliza and Nicholas, the grandchildren of my brother's friend, the grand neice and nephew of my lifelong friend...........

The camp was a kind of stereotypical rented cabin on a lake. The beach in front was strewn with boats and other floating paraphernalia. Dogs ran wild everywhere....chasing sticks thrown into the water for them to chase, playing with each other. Children swam like porpoises, and adults lounged in chairs or on floats. Meals were a joint effort, with potato salad, rice, corn, steaks, salmon, salad and burgers appearing on the huge table each mealtime. People slept either in one of the two bedrooms or on beds positioned in various corners of the big room, usually under deer heads and guns that graced every wall. In the evenings we all sat at the table and talked, reminiscing as well as discussing more contemporary times and issues.

On the second day after my arrival Jack took us for a day-long boat trip, wandering from lake to lake on streams that connected them. We were loaded with coolers of drinks, sandwiches, sunscreen, hats and sweatshirts(in case we got cold). At times Jack took the boat to the shore where we briefly explored the woods and peed. The first picture shows Jack, Lorraine, and Gina, all of whom were the companions of my childhood. Cindy was also there, and representing the next generation, Becky, who perched on the bow of the boat watching for dangerous rocks. Paula, the other sibling, had left early that morning with her two grown daughters (one of whom is in the second picture in the canoe with her dog), driving a truck and hauling a huge camper.

Usually I am nostalgic and sad when I am in a situation that brings back old memories, but this was different. I felt connected to my past in a nice way, and the passing of time seemed natural and correct. When I was young, Lorraine's parents were there taking care of us. They have both died, and their children have stepped into their place, caring for different children, different dogs, in different camps on different lakes. Yet it was still the same, with people flowing through the generations seamlessly. I felt privileged to be a part of it. I was a part of it despite the lack of the right genetic material. I had a place in the picture, a place of long-standing and security. It was a great time. 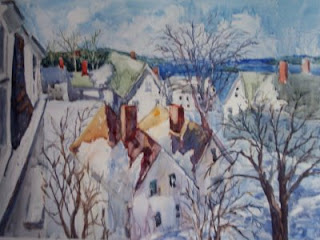 In my continued pursuit of watercolor proficiency, I tried some Yupo paper that Diana had given me. Once again, this is from a picture of an old painting of mine done in acrylic. I was looking out the third floor window of Sydney's house.

The paper was really unlike anything I have ever used. It has a slick surface that doesn't absorb anything. The paint slides and runs all over the place. It will wipe cleanly off the paper with either a brush or a paper towel. Because of that, going over what you have already done is impossible, since touching it lifts the first layer up off the paper. I played with this for two days and find the result interesting. It's hard to see in the picture, but it is reminiscent of finger paint. Every drip (and they are everywhere) is evident. No mark is undocumented. Therefore the finished work is very painterly.

I can't imagine trying to do anything precise with this paper, though I suppose with small brushes and a very controlled hand it would be poosible. This is a fairly good sized painting. As enamoured of experimentation as I am, I had a good time doing it. 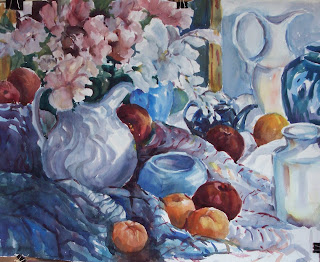 After thinking about watercolor the other day, I decided to give it a try. I painted from a photo of one of my own paintings (an acrylic) that Thelma set up once for us. To give myself the best chance, I used a bigger piece of paper....probably around 18x24....to keep from picking. I tried to conjure up the spirit of Thelma and Betty Lou as I worked, imagining them there with me. Yesterday, when I started, I thought I was going to fail miserably, but today I am pleased.

Painting from a painting is like having a head start. I had already translated the objects into paint. It gave me an edge that I thought I would need, as well as chosing a still life, which I associate with so many pleasurable occasions. Thus setting myself up for success, I was rewarded. 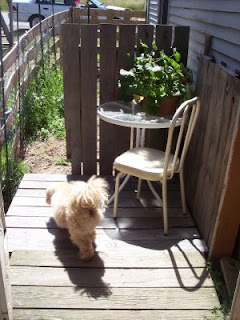 Here is Lytton taking a look at my makeshift patio. I fashioned it from wood palettes I found next door and miscellaneous boards and bricks. It is part of the dog yard, so the boys can join me, and my view of the gas tank is perfectly obscured. The geranium adds a decorator touch.

I have wanted a spot to sit outside and now I have one. It's far from grand, but it will serve the purpose.
Posted by Cheri Walton at 2:57 PM No comments: 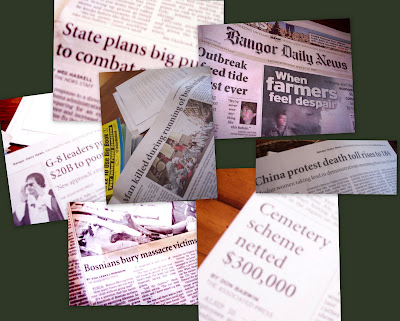 Posted by Cheri Walton at 10:09 AM No comments:

Is it time to pick up a little? 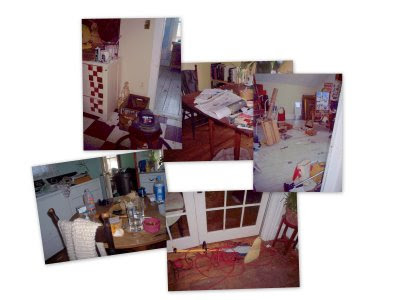 Once I Ccould Do Watercolor 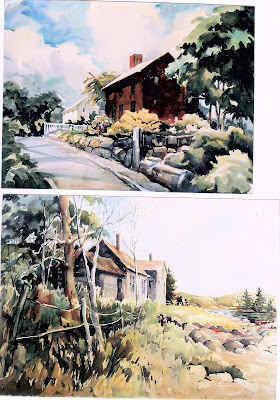 I scanned these old photographs into the computer in order to preserve them, though I couldn't get them to look exactly as they do. In any case, the top one is a watercolor I did on the street in Rockport. Looking at it, I am transported there. I remember the day, the ocean air, the smell of the water behind me. I believe this is an Inn on Atlantic Avenue where I stayed during one of the workshops.

I guess Thelma's death is making me unusually nostalgic, though I have always envied my way of painting back then. I get out the watercolor paintings I have left from those days and wish I could still paint like that. I think again how my style in that medium came naturally under Betty Lou's guidance. I did not struggle then to make my brushwork look like Emile Gruppe's. I had my own brushstrokes. I had my own way of doing things.

The winter before last I tried to get my skills back. Eventually I liked what I did, but it lacked the excitement and spontaneity that is so characteristic of the older ones. You could see the carefulness.....you could see me sitting in my chair with furrowed forehead, concentrating on small areas of the paper. You could imagine me paying attention to the painting and not the subject, picking at sections that only vaguely reminded you of other pictures of water or trees. You could not feel the air, or the heat, or the wind.

Yesterday I took my easel outdoors, to the boatyard, with Diana and another painter. I wondered if being outside would help, though I took my acrylic paints which suddenly felt static and dull. There was a little something there, though....the hint of a possibility.

Posted by Cheri Walton at 11:23 AM No comments: 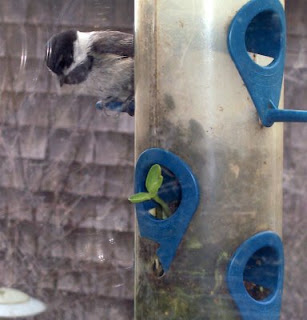 I just couldn't help it.....I had to taker a picture of this chickadee contemplating the fact that one of the sunflower seeds had sprouted. I suppose it was the rainy weather that caused it, but I can't help but be blown away by the forces of nature. Human beings think they have accomplished amazing things, and they have. Yet there are things going on every minute that we can not match.

Posted by Cheri Walton at 7:17 PM No comments: 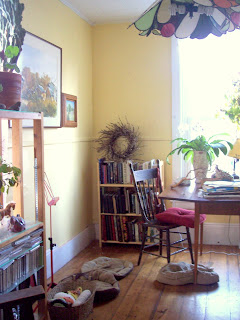 On a whim I decided to paint my dining room. It has seemed drab to me since I visited the apartments Sydney is decorating for rentals. She has done a beautiful job and used a lot of wonderful colors. Coming home was like going into a beige cocoon by comparison. I bought some paint Tuesday and began painting yesterday. The color was much more yellow than I thought by the color card, but I like it anyway.

The job was at times like a comedy of errors, as are too many of my projects. My method was to move everything away from one wall at a time, paint it, and move everything back before going on to the next wall. Therefore, the room was full of clutter all the times and I was constantly tripping over things, banging into furniture, and stepping into the paint. The dogs also found it necessary to walk on the paint spills and track all over the house. The ladder I have is one discarded by the gallery because it was too rickety. It is serviceable, but an adventure in maintaining balance. It's not a painting ladder, either, so it has no shelf to hold a can of paint. I was up and down hundreds of times, dripping paint all the way.

When I had finished, I had to clean paint from the clock, the printer, the computer, the desk, the table, and all the chairs.......not to mention the floor. Nevertheless, I am happy with the results and glad I did it. The kitchen is next.