Back Yard with Bicycle 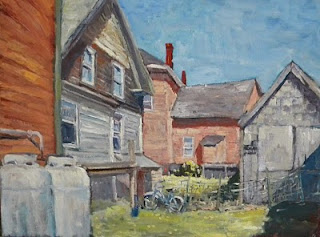 The back of my house was never completely painted because the painter was afraid of heights. The very top is raw wood that was put up after water damage to the clapboards. It makes an interesting series of colors there, while the face that it presents to the street is neatly painted gray with white trim. The space between the house and the falling down shed is the chicken yard, and my bicycle is leaning against their fence to hold some boards I laid across the ground after they dug their way under it. I love all the angles and textures and shapes. The only curves are the bicycle wheels and the propane tanks in the foreground. It's not a particularly picturesque scene, but it has a lot of appeal to me. This is oil paint on an 18 x 24 canvas board I had already painted on. It's a good thing I have no thought that my work will be, or should be, seen by generations to come.

Posted by Cheri Walton at 6:26 PM No comments: 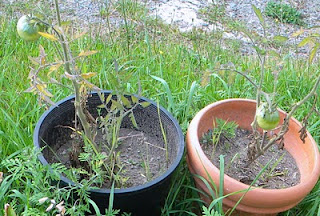 In the Spring, Thom gave me two tomato plants out of the six he had bought. His are now five feet tall, surrounding their stakes with an abundance of lush green leaves and hanging with fruit. Mine, as is painfully obvious, did not fare so well. I haven't been very good at growing vegetables since the kids were small and we had a huge garden in Newburg. Not only was I constantly seeing things I didn't want to see, like snakes and slugs and worms, but I was forced to work at breakneck speed to keep up with the harvesting, canning, and freezing. Cooking and eating was a chore as I stuggled to think of fifty ways to eat lettuce. The final straw was watching what seemed like hundreds of caterpillar-like creatures floating out from behind the broccoli heads when I plunged them into a sink full of water. I never wanted to see a vegetable again that wasn't lying in a white paper tray and surrounded by plastic wrap. When you live in the country, it's hard to get away from fresh vegetables because all your neighbors bring you the surplus from their own gardens. I managed, though, by dropping their bounty into the trash as soon as they were out of sight.

My flower garden is now in its Fall decline, a little sooner than in the past because my weed-wacker stopped working. Therefore the weeds and grass have given the yard an unkempt look, along with the fact that most of my plants bloom in the spring and are now long past their prime. I can take some solace in the fact that I kept it looking good all through May, June, July, and part of August. That's a record for me, whose enthusiasm for taking care of it usually dies in the middle of June. I've enjoyed it immensely this year, and next spring I will definitely add some Fall blooming plants. And a new weed-wacker will be a necessity.

Posted by Cheri Walton at 6:49 PM No comments: 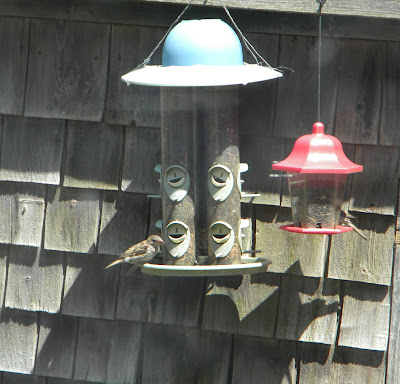 Posted by Cheri Walton at 12:47 PM No comments: 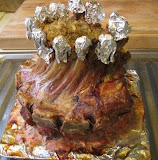 Champagne cocktails and crown roast of pork were on the menu for a little dinner party at Thom and David's. I was a guest, of sorts, but Meg was the guest of honor. She is a mutual friend I met years ago at book group at the library. She had read that we were discussing "The Summer House," which had been my selection. She came to the group to find out who had chosen it, because she had actually lived with the author in England for awhile. Alice Thomas Ellis is one of my favorite writers and I was thrilled to meet someone who had actually known her. From there we developed a casual, but affectionate, relationship. Somehow Thom and David came to know her, as happens in Eastport when people are as sociable as the three of them are. They appear at concerts, plays, movies, art openings, parties, etc. and become acquainted with each other. I circle the outside of this group, joining in now and then.

Thom had prepared an elegant and delicious meal. After a beautiful cocktail made by adding a cherry and a sugar cube to a glass of champagne, we adjourned to the dining room. There were flowers on the table, and a bottle of wine waiting to be opened. I am so enamoured of the corkscrew that Thom and David have that I have become the official opener of the wine bottle at every meal we have together. We ooh-ed and ahh-ed over the food companionably and engaged in pleasant chatter throughout. All of us are of one mind on most topics, which makes for comfortable conversation no matter what the subject. It was one of those wonderful occasions that re-enforces our love of the life here.