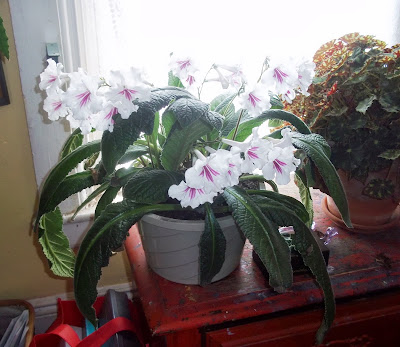 Faithful as always, this plant of unknown (to me) identity has produced its usual abundant blooms.  It's the only one of the indoor plants that has really done much this Spring.  Last year was spectacular, but the orchid cactus produced only a couple of small blooms, and the Peace Lilies are quite unhappy for some reason.  A few of the other inside plants will produce a little later, I believe.  The garden in front of the house is making up for it all, threatening to grow through the windows and doors.  Pruning will be in order in awhile or I will be engulfed in greenery.  If I had known how big everything was going to get, I might have planned better.

Believe it or not, I have struggled to make this origami dragon fly for almost a week.  How could I not take a picture of it?  It is a little the worse for wear, having been folded and unfolded hundreds of times, and I have no real feelings of accomplishment.......only relief that I finally figured it out.  To prepare myself, I actually started at the beginning of "The Complete Book of Origami" and did some elementary forms first.  After three of them, with only minor success, I decided I may as well go back to the advanced section.  I think the practice helped, though. The worst directions in the book are "as pictured"........which refer the reader to a diagram with curving arrows and dotted lines going in directions that appear to defy physics.  Or "repeat on the other side."  At least in this stage of my life, reversing a complex set of directions  is a tremendous challenge. I'm not sure if I am done with this for the time being, but I suspect that I'm not. 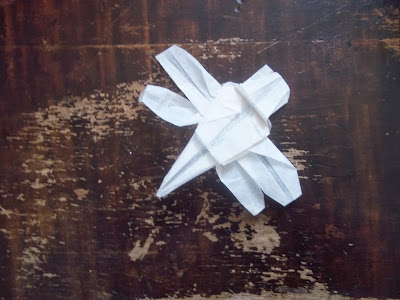 Posted by Cheri Walton at 5:31 PM No comments:

Yesterday was the first time all summer I have gone down to the beach with the dogs. It's hard to see Willy since he always wants to run as far away as he can...in the big picture, he is just a white dot on the rocks, headed for high ground.  I had brought treats with me to entice him back, since several times I have had to chase him down.  Yesterday he actually jumped in the water and swam out a few feet after a sea gull perched on a rock near the shore.  Once he realized what he had done, though, he turned tail and hurried back.  The last picture is when he was just coming out of the water.  The then absent gull had been on the seaweed-covered rocks in the background.  Patrick, doing what he does best, is quietly just looking adorable.  Once in awhile I wonder what I would do without the dogs, but the idea is just unimaginable. 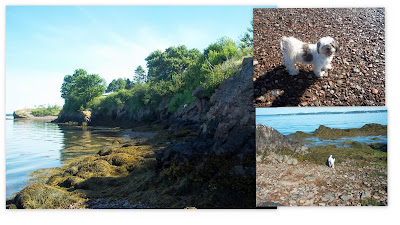 Posted by Cheri Walton at 5:12 PM No comments: 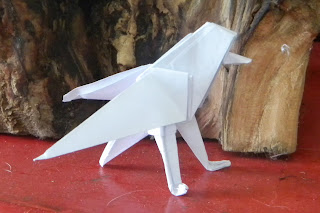 How have I been spending my valuable time?  Here is the result of two days work.  And I mean whole days............how obsessed I can become.

My shoulders have been bothering me so much that I really can do almost nothing that requires using my arms, which if you think about it, is almost everything.  So, I got out my origami books and went to work.  I have forgotten almost everything I knew, which was pretty elementary anyway.  The first day I was finally able to re-create a beetle like the one I did before.  The failed attempts filled a good sized waste basket full of paper folded so many times that it was limp and full of holes in the creases.  I finally gave up on the tarantula I was trying (from the advanced section of the book, requiring 49 separate folds).  This song bird (27 folds) was back in the beginning.  There's no way to describe the complexity 0f the instructions, even with diagrams which supposedly show you how.  To prepare, you first have to learn the names of the various folds, like rabbit ear fold, sink fold, swivel fold, petal fold.....each of which involves many steps and a basic knowledge of engineering and physics.

Well, I am nothing if not determined and persistent, immune to boredom, and without aversion to trivia.
Sadly, it is the learning of things that I crave and typically once I have accomplished a skill I lose interest in it.  I am a living example of "jack of all trades, master of none."  The pursuit of excellence eludes me.

Posted by Cheri Walton at 4:10 PM No comments:

Willy, Otis, Annie, and Patrick (not pictured) at the park. 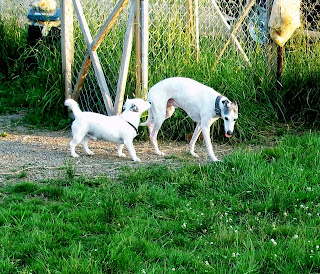 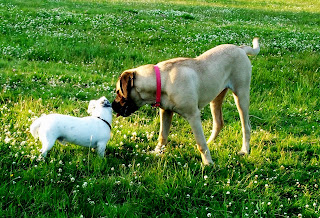 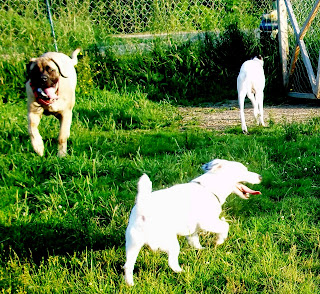 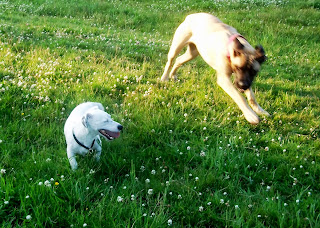 Posted by Cheri Walton at 7:27 PM No comments:

At the last minute, I decided to walk downtown to watch the 4th of July parade.For a few years I haven't gone, but with my interest in painting crowds of people, I took my camera with the idea of getting pictures of the audience.  The parade was a mass of trucks with blaring horns dragging floats full of people doing various patriotic things, or playing patriotic music, or marching in uniform.  At one point it looked like the old newsreels I used to see at the movies featuring parades of weaponry and military might.  The whole air of celebration, though, is nice to see and experience.  I left before the parade ended though, and went home by way of the beach.  The tide was so low I could walk all the way from downtown to the ferry landing.  It was very hot, and I went into the water several times to cool off(up to my ankles).  On the way I passed David and Thom's, where they were lounging on the deck with their guest, Thom's niece.  I stopped for a few minutes, then went on home to take care of the dogs.  I had a date with Kendall and Pierre, which was very enjoyable as always.  Kendall and and I took two of their dogs and two of mine to the dog park.  We had some concerns about how the dogs would get along, but they were fine and a good time was had by all.

At that point I envisioned a long evening under the living room fan.  Again, though, I had a sense of being left out of things and decided to go to the fireworks.  I'm glad I did.  It was a wonderful show, and I had a sense of satisfaction having done what an Eastport resident should do on the 4th of July.  My childhood need to do what I think is expected of me still lurks close to the surface of my psyche, and there are times when that's all it takes to make me happy.

Posted by Cheri Walton at 7:20 PM No comments: 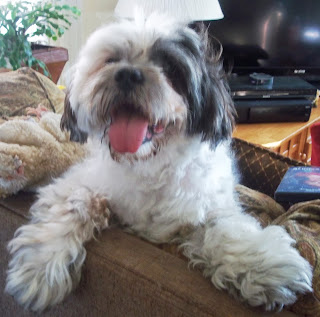 Finally the weather has become more seasonable.  It is, in fact, hot.  Patrick seems to be bothered by it most.  Last night I got up from my favorite TV show, CSI Special Victims Unit, and gave him a spur of the moment haircut.  I think he feels better, though there's not much I can do.  Besides, I have my own problems with the heat.  All last winter I thought perhaps I had changed my preference for cold over hot.  All it took was one day, though, before I remembered how much I hate heat.  I would still rather be cold than hot.  I think Patrick feels the same way.

Patrick is still taking medication for whatever illness he had, and is doing well.  Finally yesterday the vet decided to try and cut down a little.  The idea scares me, but I will try it.  It will be terrible if he gets sick again, and I hold my breath.

Posted by Cheri Walton at 5:53 PM No comments: