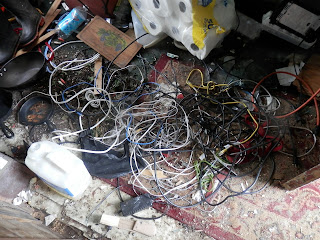 I've been spending most of my time trying to weed out the unnecessary clutter that fills every nook and cranny of this house.  So far I have filled fifteen trash bags.  Other items too big for the bags have stood on the sidewalk their own...a cooler, a lawn chair, etc.  On the left is a pile of USB cords, cable wire, telephone cord, extension cords, and a few miscellaneous connectors I didn't recognize.  I spent some time separating them into categories and placing them on a shelf in the closet.  How could I dare throw any away since I had no idea what they were for?  What if I needed them?  Otherwise, I was merciless.  Anything I hadn't needed for at least a year went into the trash.  Mostly it was junk that I have kept for various reasons and never used or looked at.

The next room I tackled was the "guest" room.  It's also the room where I store most of my artwork.  Since so much of it was in the show at the art center I took the opportunity to go through the rest and throw out what was really meaningless.......proofs of various prints, failed paintings and drawings, etc.  I went through the drawers of the chest in there and tossed towels and sheets and curtains that have been there unused for years.  In my own bedroom I tossed old clothes and shoes, and hundreds of cassette tapes that aren't usable anymore.  Downstairs I cleaned out the closet in the dining room, which was full of sheet music from when I was playing the recorder, musical instruments, old tablecloths, napkins, wrapping paper, boots, gloves, hats, skeins of yarn, etc. In addition, I put down a new tile floor in both the upstairs and downstairs halls.  The kitchen and living room didn't require quite as much work, since I maintain them fairly well and keep the excess to a minimum.  When I began this cleaning frenzy it was because I had decided to move back to Bangor if I could find a place to live. I wanted to weed out my belongings to make the move easier.  For awhile I was obsessed with the idea and spent days on line looking for apartments and dreaming of the city life of my home town. I applied for subsidized housing.  As time went on, though, my enthusiasm died down, as I had predicted it would.  I have moved so many times, looking for nothing other than something different.  I love the novelty of a new place to be...........so I made my house new. 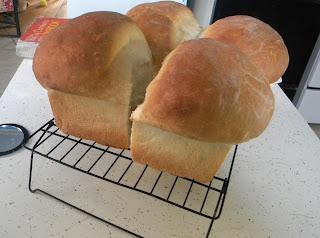 Today I made bread using the first recipe I had tried.  I've tried two or three others since I got my new stove, but this is the one I like the best.  As you can see by the picture, these loaves were quite enthusiastic and practically overflowed the pans.  I put two balls of dough in each pan to make them easier to store and freeze, but I'm not sure it was a good idea.  The two balls bulged out over the ends rather than rising in the middle.  Nevertheless, it is delicious. 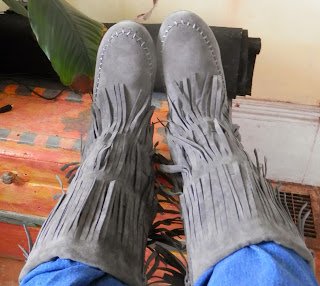 I have wanted some fringed boots ever since I can remember, but they have always been too expensive and too frivolous.  Thanks to 6pm.com I found this pair for a fraction of the prices I've seen in the past.  I couldn't click the "buy it now" option fast enough.  The best part is that they met every expectation I have ever had.  So what that I am 70 years old and this is 2015.  So what that it is May.  Don't anybody try to take my boots off my feet........
Posted by Cheri Walton at 1:48 PM 1 comment:

Kendall and I went to the horse show in Pembroke Saturday.............partly because her horse Charlie was participating and partly because it was dedicated to one of the volunteers at FLFES who was killed in an automobile accident a few days ago.  She was a lively, lovable girl of 19 we all knew well because of her presence there before and after she adopted one of the horses.  There was a ceremony in honor of her, but we arrived after it was over (thankfully).  Immune from the mood that no doubt prevailed prior to our arrival, we visited happily with people we knew from the shelter.  I hadn't seen Charlie for many months and I had forgotten what a pretty boy he is.  He lives with a family with three teenage children, and Kendall lets them ride him as if he were their own.  Most of these pictures are of Rebecca and Charlie in the barrel races.  By chance, though, I found out that another shelter horse was there, too.  It was the black mare, Abby, who was so sick and traumatized when she arrived she had to be isolated.  I was appointed her caretaker because the other volunteers were afraid of her (with good reason), and I didn't have the sense to fear her.  Gradually she got better and the last picture is of her and the little girl who now owns her.  I could have cried with happiness when I found them and saw how well it had all turned out.

I posted a few other pictures of the general ambiance, mostly for my Michigan blogger friend Pamela.  She has vowed to see horses every day now that she is back from the southwest.  If no live horses are available, perhaps she can take some pleasure in seeing these.  I certainly had a good time at the show............though it brought to the fore how much I miss working at the shelter.  Luckily I am still in touch with the people I met there through facebook.  It keeps me connected to that time and that life...........
Posted by Cheri Walton at 7:34 PM 1 comment: 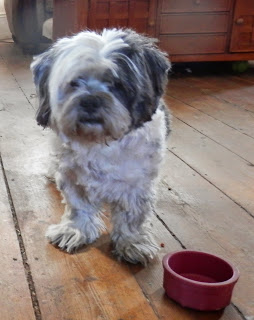 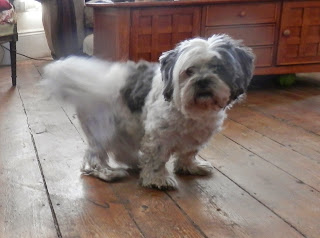 During the winter I let Patrick's hair grow to keep him warm.  Yesterday I decided to give him a Spring haircut.  He was very good while I cut a good 6 inches off.  I had forgotten how cute he is with short hair, like a puppy.  He doesn't seem to care one way or another.  The only thing the haircut meant to him was the treat that he knows he'll get when it's over.  Willy had disappeared upstairs during the process, but his very sharp ears heard the top of the treat basket open .  He came tearing down for his treat.  He knows that if one gets a treat, the other does, too.

Speaking of Spring, my new indoor-outdoor thermometer tells me that it is 72 degrees outside and 60 in the house.  I guess I should open the windows.
Posted by Cheri Walton at 2:18 PM 2 comments: 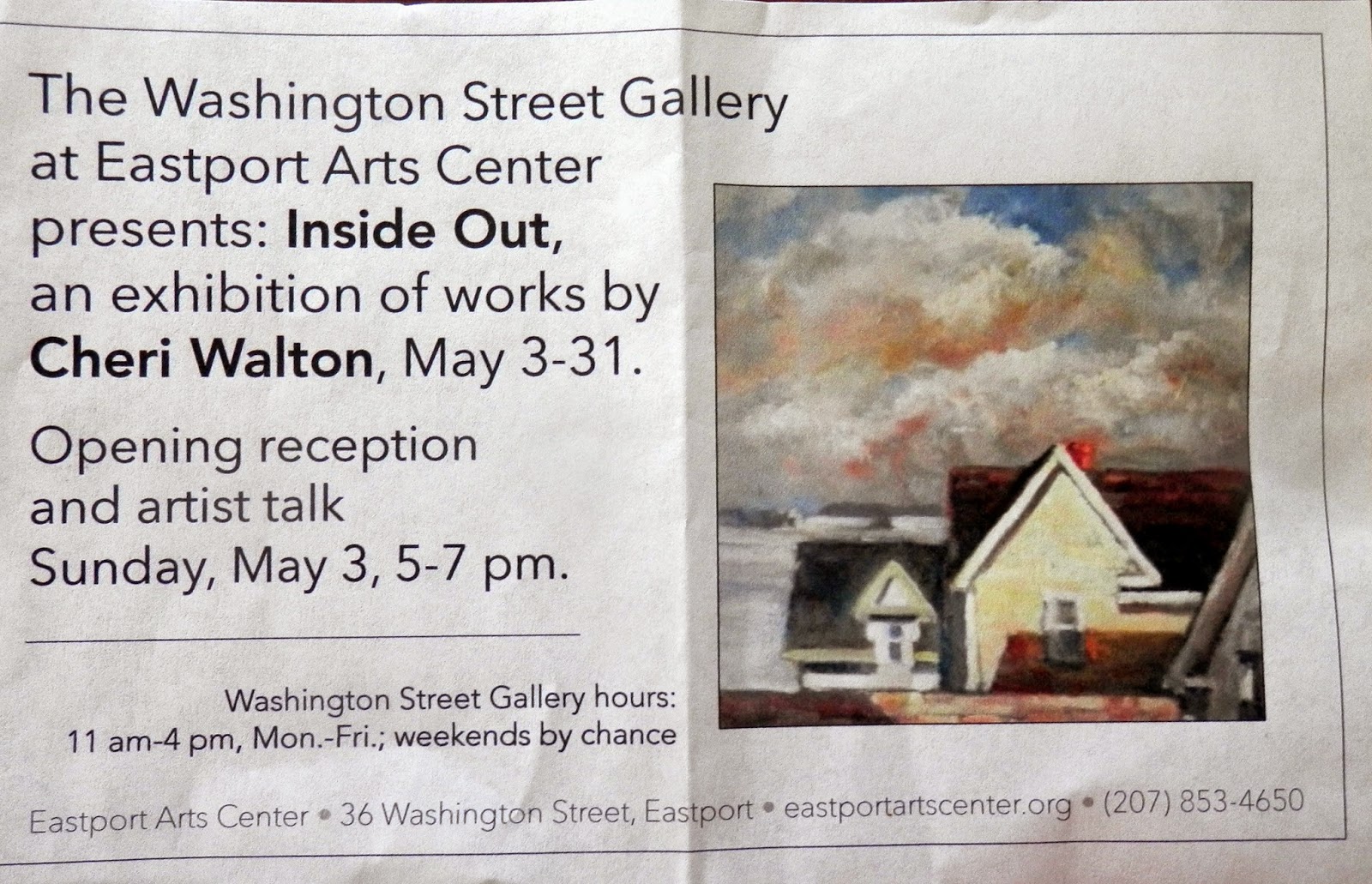 It seems like I have been planning for this show forever.  Finally it is in place and the reception is over.  I was amazingly prepared when the time came to hang it all up, and I hope I will have some pictures of the gala opening soon.  I was nervous before my talk, which I had not prepared beyond a few notes.  I trusted that my public speaker persona would come to the fore, and it did. The talk consisted of ramblings about my history, my paintings, and the history of art in general.  Afterward, people told me they enjoyed the talk, but how can I know?  It was overly long, leaping randomly from one topic to another.  Well, it's over now except for the clean up at the end of the month.  Amazingly I got the whole show over to the gallery in one carload.  Seeing so much of my work hung all in one place was amazing to me.  It was almost overwhelming.  I loved it. 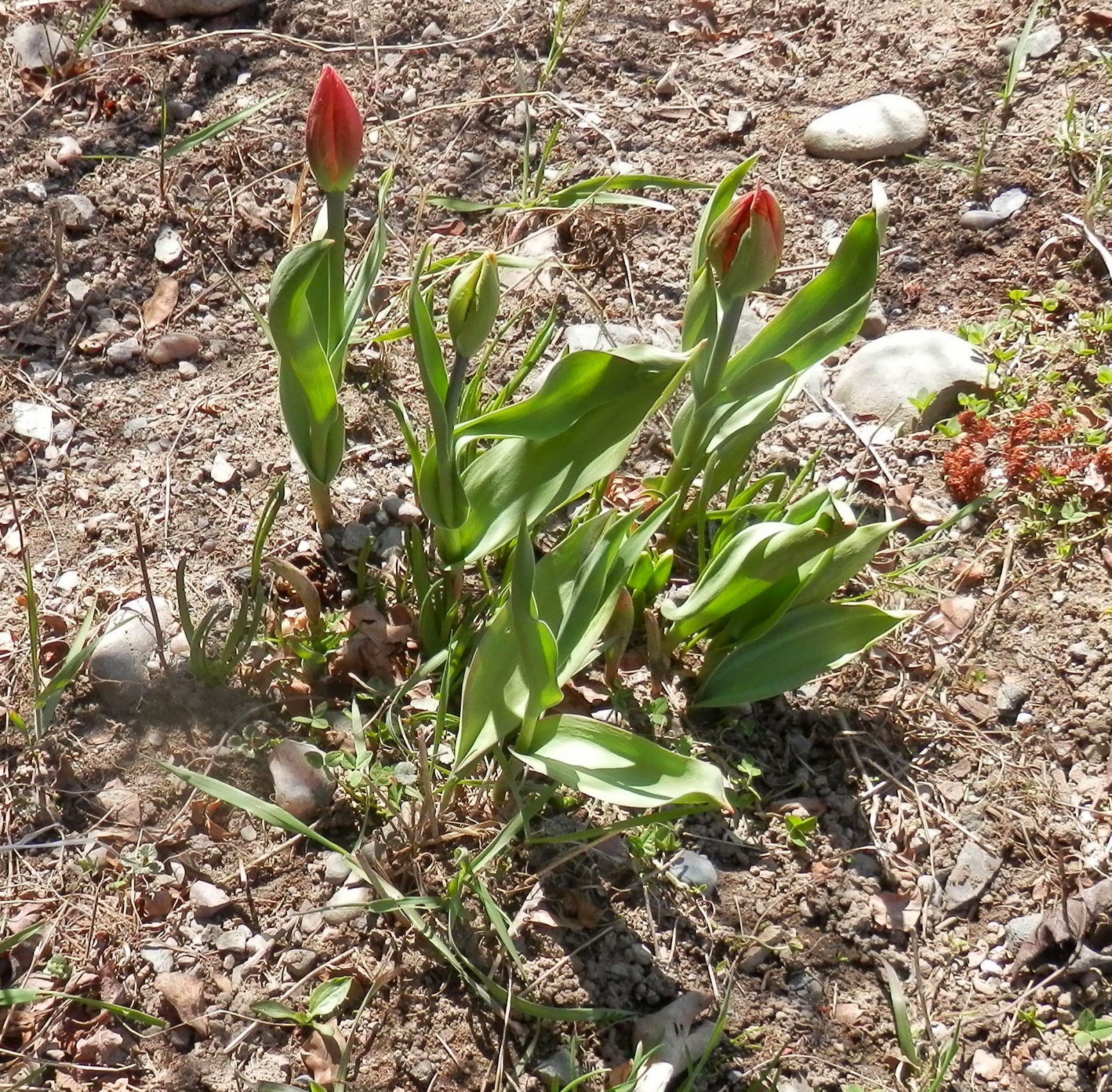 Now on to other things.  The garden has certainly started its path to summer.  These buds appeared so suddenly I almost didn't notice them.  I haven't paid much attention to anything but the show and lots was happening while I was looking elsewhere.  The lilac, so recently buried under the snow, is budded.  The lilies are about ten inches tall, the Seedum (spelled phonetically since I've never seen it in print) has erupted to the point that last year's dead stems are no longer visible. Hosta is coming up, the rhododendron is budded.  Since I haven't worked out there, the ground is covered with dead leaves and grass.  I did buy a rake a few weeks ago, and I will get at that job this week.  The chickens are happily escaping from their pen two or three times a day, so I need to attend to that as soon as possible.  I also want to replace the door on their coop.

Of course the house is a mess and Patrick needs a haircut.  I have let his hair grow to keep him warm, but it has gone beyond the point of acceptability......snarls and mats make up too much of his coat.  The house is a mess.