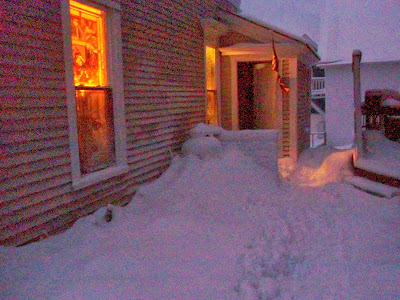 It has been snowing for several days, along with an ice storm that has paralyzed most of New England and much of eastern Canada.  Lots of people had no electricity, which means no heat, and spent the holiday in shelters.  Many are still there.Here in Eastport, though, we were lucky.  Our Christmas took place as planned, despite the fact that David's daughter Martha traveled by plane from New York during the terrible weather.  He and  Thom drove to Bangor to pick her up during the storm, but arrived home safely.  We had our traditional holiday in comfort and good cheer.

I had Christmas eve dinner with Pierre and Kendal, their daughter and son-in-law, and a neighbor.  I feel so lucky to have friends to spend the holidays with.  I also spoke on the phone with my aunt Jeanne-Marie, and cousins Michelle and Beth.  Carrie and I talked, and I got a card from Jesse and Sabrina.  Gifts arrived by mail from all, including my old friend Don in New Mexico.  It's hard to believe we are still in touch after fifty years.  We had a High School romance that turned into a lasting friendship........imagine. 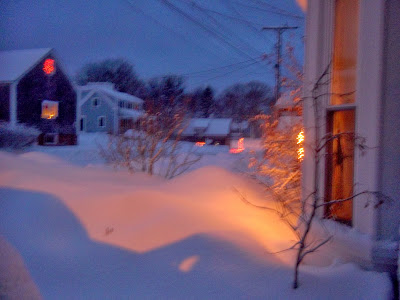 So goes another holiday, each the same in many ways, but also new and fresh.  Today it is snowing again, and my boy Willy pulled away from me three different times on our walk.  He and Patrick both love the snow, but Willy's enthusiasm knows no bounds.  If not for the fact that his leash got tangled in trees, I never would have found him. The last time Patrick and I followed his footprints and caught him under Greg Biss' deck.  I took these pictures after we got home, the back doorway, and then the front of the house with my Christmas wreath lighting the snow. 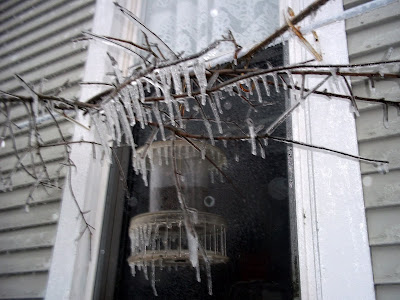 This is the snowstorm that came and went and came again.......this time creating first slush and then ice.  There is still plenty of snow, but the precipitation is now more like rain.  Evidently, though, overnight it was cold enough to freeze as soon as it hit anything solid.  Consequently, the bird feeder that only yesterday was covered with chickadees is now wearing a coat of icicles.

Walking under these conditions makes me realize how old I am getting.  I creep along taking tiny steps, even with my crampons on my boots.  I fear slipping and falling, at the very least letting go of the dogs and at the worst breaking a bone that osteoporosis has most certainly ravaged.  Only lately have I been able to see this as a reality instead of a joke.  I am not "like an old person."  I AM an old person.  Once I am comfortable with this fact I will feel better about it.  One spends one's whole life dreading old age, so it is a little hard to accept it.  I need to embrace this time of life or I will waste my last years, however many there may be, wishing I were different.

I have just lately started to see the reality of how long I have been alive.  I'm not unhappy about it, but haven't really changed my self image yet.  I will.

Posted by Cheri Walton at 10:04 AM No comments: 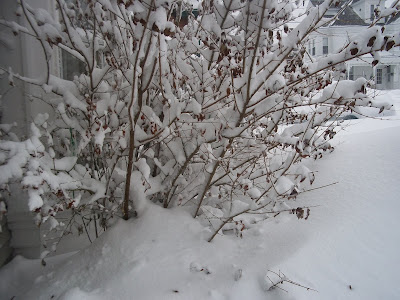 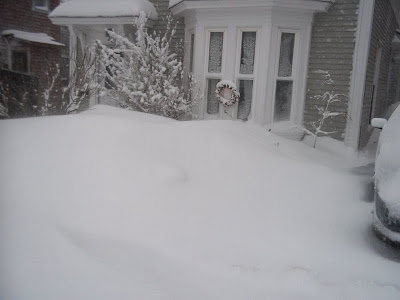 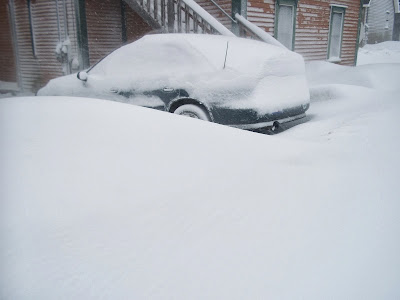 I didn't get a picture of the first snow, which was a few days ago.  This is our second storm, a formidable one.  I wasn't able to get the dogs out beyond a small spot in front of the door, which I shovelled out in order to find my newspaper. I thought my search would be fruitless, but I did find it.  The snow is very light and dry, so it was an easy job.

The drift patterns are not as dramatic as some storms have been, but the snow is deep everywhere.  Willy was shocked when he saw it, but bravely jumped through the door anyway.  He disappeared up to his shoulders.  Because the snow is so light, he was then able to jump through it and plow his way to the street.  I wanted to get a picture of him, but by the time I got the camera he had decided enough was enough.  Patrick and Benny both had to be physically dragged through the door, where they stayed only long enough to do their duty before charging back inside.

So winter is here in time for Christmas.  Despite global warming, nature has come across with the goods.

Posted by Cheri Walton at 11:19 AM No comments: 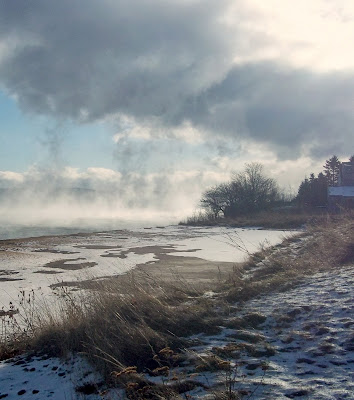 Record cold for this winter this morning, and the sea smoke certainly emphasized the point.  The picture doesn't do it justice, and it is way too cold for me to get my Nikon and mess with it to capture the sight.  (I've never really taken the time to learn to use it.)  As it was, Willy was enjoying the weather so much I could barely hold on to him as I snapped pictures.  He ran in circles just as fast as he could go, yanking my arm when he had extended the leash as far as it would go.  A man in a truck was driving down the hill and he rolled down his window to say "Good thing someone is enjoying this."

Last night I tried to photograph the sky as it was then, too, but the pictures just didn't capture the sight.  There was a giant bank of clouds just over the horizon as the sun went down.  The lights from the houses on Campobello were visible under the clouds, making a very eerie sight.  Nature seems to never repeat itself......certainly not in the lifetime of one person.  You have to watch the ocean closely or you will miss something that will never happen again. 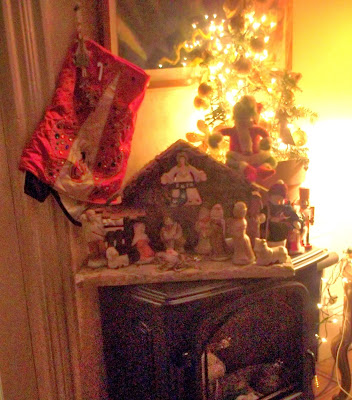 It's hard to see my Christmas tree, but it is there beneath all the lights and behind the paraphernalia that constitutes my nod to holiday decorating.  This year's tree was from Pierre, as was last year's.  It may be small, but it's mighty..........it has 200 lights on it's tiny branches and is doing a heroic job.  I have all the bases covered with the holy family, angels of various kinds, the grinch, the nutcracker, Santa Claus, and my Elvis stocking.  The tree is covered with gold balls, birds, and flowers.

The tree I had last year is now planted outside, doing great.  I hope this one will join it in the spring, but I have to confess that I ripped a lot of its roots taking it out of it's container.  Time will tell.    It's  just a baby tree, and I hate to see it die.

Posted by Cheri Walton at 4:58 PM No comments: 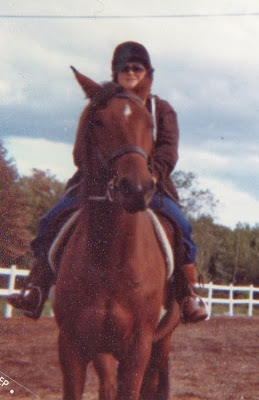 Oganizing some of the piles of "stuff" I have lying around from cleaning up the dining room I came across some snapshots of me riding.  This must have been in the 80's. I got my first horse, BJ, in 1980.  I remember thinking it was the happiest day of my life.  I had always wanted a horse with a passion not experienced before or since.  At the same time Jesse was liberated from the body cast he had worn for two years.  My marriage was still relatively happy.  Life was good.  This utopia was extremely short lived because my father died a few months later.  Despite everything that naturally followed that shocking event, I had my horse and I was thrilled about it.  What wonderful days I spent at Trapho Farms.

I have always regretted selling BJ, my most beautiful boy.  He was a wonderful guy, spirited and feisty.  That proved to be his downfall, because his behavior was not tolerated by the owner of the stable.  He was always escaping, and he mauled one of the baby goats there.  He had a habit of charging as well, and no one but me was safe in the pasture.  A four years I was told he had to leave, and I foolishly thought I would rather stay connected to that stable than move to another.  I sold him to a nice girl and I'm sure he had a good life, but for years I cried every time I went by Trahfo farms.  I tried to replace him with a series of other horses, but there was never another one I loved like I loved him.  To this day I remember the last time I saw him, looking out of the trsiler window as his new owner drove away.

It's making me cry to think of it. 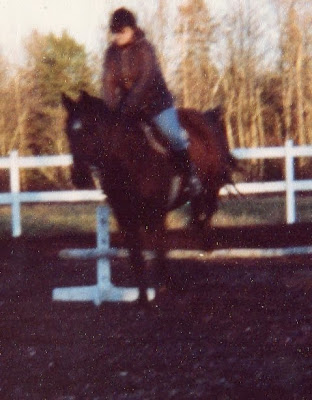 Posted by Cheri Walton at 3:30 PM No comments: 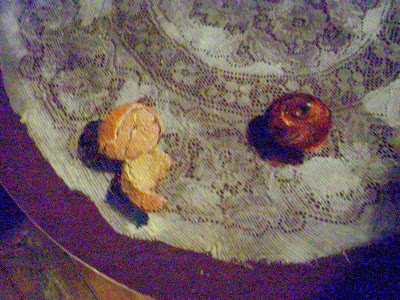 This picture is a little dark, but is a better representation than others I tried with the light on.  Anyway, I am just thrilled with this..........I collaged an old lace tablecloth on to the top of the dining room table using Modpodge, then coated it with polyurethane.  When it was dry, I painted the fruit with acrylic paint.  When that dries completely, I'll put another layer or two of polyurethane on the whole thing to seal it.  It's amazing how real it looks.  I got the idea from a book about painting furniture, though what is done there is more folk art.

For a little while at least, this may prevent me from littering the table, as is my habit.  I love to look at it.