End of Summer and Other Things

The Cosmos has been blown over by the wind and rain. I took this picture when I came back from the new house tonight.

I have been taking boxes and more boxes loaded with my belongings over there for the last several days. The more I remove from the house, the more there seems to be left to move. My goal is to get everything but the furniture in place before the movers come on Thursday. Theoretically that insures a smooth transition without a lot of unpacking to do. The cupboards are already filled with my dishes. My small appliances are on shelves in the shed pantry. My biggest bookcase is in its place with most of the books on it. Almost everything in my studio is already moved. The boxes of memorabelia that continue to be something I can't do without are in yet another closet.

For awhile I felt nothing about leaving this house on Wilson St., but as the time draws nearer I am beginning to feel nostalgia creeping over me. This is to be expected. The place is tied to Phyllis, and Lisa and Will, and the kindness they have extended to me. Phyllis' generosity is the reason I had a place to move into when I lost my last house and failed to get a loan to buy this one. Will and Lisa cheerfully accepted the loss of the income they had expected from its sale. It's their part in my being here that makes me feel teary, not the place itself. I am anxious to be back in my old house on Water Street. I feel very much at home there, as if I am going back where I belong. It is where I began my life as a resident of Eastport and fell in love with it. As I walk around now putting things in their places, I feel at home. The ten years since I lived there almost melt away, but the house is better, and so am I.

Posted by Cheri Walton at 6:46 PM No comments: 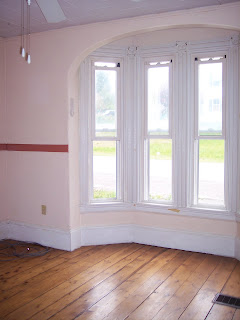 I went over to the new house today to try to place my belongings in my mind. Sue was there and so was Marshall, fixing the ceiling tiles in the hall. It was quite a relief to see 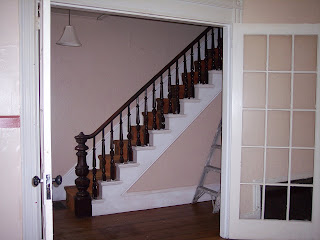 them working to get the place ready for the section8 inspection.

These pictures are a little flattering of the place, in that the details that need attention aren't evident. Nevertheless, the elements are there, showing what a pleasant place it is. I love the bay window, and the French doors in the living room. The finished pine floors are great. The third picture shows the dining room, which looks out over the ocean. In fact, all the windows on the back of the house have ocean views. From the second floor you see the roofs of the houses cascade down the hill to the water.

I wish I could wave a magic wand and be in the house. The moving process is so daunting that so far I have been unable to begin packing. I have begun the transition haltingly, making a few phone calls to change utilities. I left a message for the movers. That's the extent of my preparations.

Competing for my attention is Lytton's most recent episode of alarming physical symptoms. The vet says he probably hurt his back, and I have been giving him medication for pain. He seems better, but whenever anything goes wrong with him I become obsessed with the fact of his eventual death.

Meanwhile, I've spent some time with David and Thom, eating Fall food, like meatloaf and a boiled dinner. The tastes of comfort food sustain me. Talk of Thanksgiving raises my spirits. Last night we went to a play at the Art Center, a welcome diversion. Earlier I was at the library book group meeting, discussing "The Thin Place." There is one person there who irritates me with her egocentric manor and shallow approach to literature. Otherwise, I like the group and enjoyed my time there.

I feel that I am moving through some kind of dense fog with only a vague idea of where I am headed. 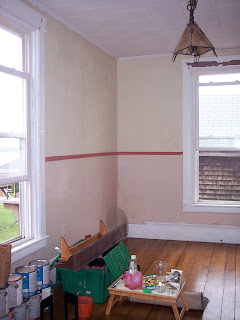 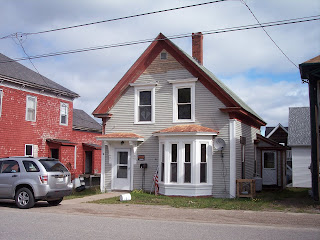 Well, I have decided to leave this house to return to the first place I lived when I moved to Eastport. As I thought about the coming heating season, the appearance of the "For Rent" on my old place triggered the idea. It is much smaller than this house, and should therefore be less expensive to run. I always loved the place, and there is something very comforting about going back where I learned to love Eastport. It is as circular as the seasons I talked about in my last post, even to the month I will move. I came here in November of 1997 and will return in November 2007............a slightly eerie coincidence. The thought of packing and moving is so daunting that I almost abandoned the idea. I'll get through it, though, as I always have, and will hope one more time that this will be my last move.
Posted by Cheri Walton at 8:03 PM No comments: 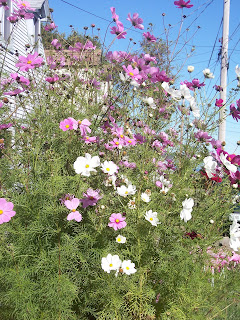 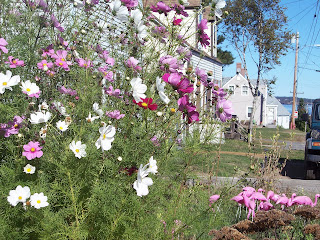 I couldn't decide which picture of my cosmos to post so I used both. The second one shows the pink flamingos as well, which I like. The first captures the size of them better. I originally thought these were blooming late, but I was ignorant of the life of cosmos. It is everywhere now, still making new buds among the dried up stems and leaves of other plants that have had their blooms and died. The leaves on the trees are pretty much in the throws of death, too. Probably they will hang on another few weeks, reaching a peak of blazing color and then fading to brown, dropping from the branches, and blowing away.

I like Fall for its promise of cool weather and dark days. Already the sun is gone by five-thirty. Night comes earlier and earlier until the winter solstice in December. Then it reverses the process. It's our planet spinning around in its predictable way, coming back to the beginning, altered slightly as it creeps toward its own death.

Anyway, short days and long evenings are my preference in dividing up waking hours. It's true that there are many more dark hours than light in the winter, but when you consider the hours we humans spend awake, the dark is only asking for equal time.

I have been spending a lot of time knitting over the last couple of weeks. That activity is inspired by the coldness of the house. I haven't turned the furnace on yet, but it will be hard to postpone it much longer. It's in the low fifties when I get up in the morning, and again in the evenings. The days are still warm, though, sometimes into the seventies. It's the time to think of the coming winter, prepare for it with warm sweaters, and not quite remember how uncomfortable it is to sit in the living room wrapped in two blankets, a hat, and mittened hands trying to warm your nose.

Alice is still on my mind constantly, a sore that won't heal, a hole that can't be filled.
Posted by Cheri Walton at 7:38 PM No comments: 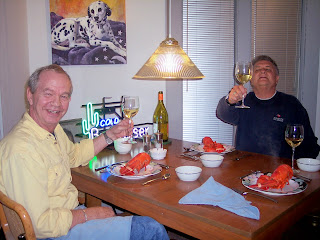 David and Thom have arrived and settled in somewhat. They asked me over to have lobster and of course I hastened to accept. It's a bizzarre thing......eating a lobster. It's about as primitive as a human being can get in the quest for food, submerging a live animal in boiling water until it dies, tearing it apart with your hands, ripping it's flesh out of its shell, and stuffing the meat into your mouth. It takes us to our roots.....that's for sure. Nevertheless, I have to admit that I like the experience and the taste once in awhile, but only if I do not witness the kill. I believe David did the honors while Thom and I ignored what was happening, focusing on our martinis.

I am becoming less and less fond of meat, though I have not given it up completely. I understand and accept the idea of the food chain. Our whole ecosystem is based on it. Philosophically there's no way to condemn it. Since I've had the chickens, though, the idea of eating other animals is less appealing to me. When I look at a package of meat or poultry in the store I feel slightly repulsed. If it is fairly well disguised from it's former incarnation, I am more comfortable with it. Hot dogs, for example, especially if they are dyed that bright red that is reminiscent of no known animal...........I'm not happy if it's too easy to envision the piece of meat living and breathing.

Anyway, it is fun to have David and Thom here. I think whatever change comes to my life because of their permanent residence here will be positive.

Posted by Cheri Walton at 6:29 PM No comments: