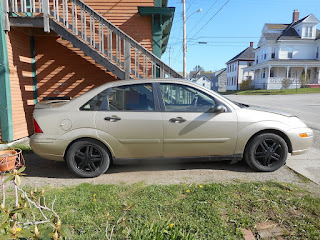 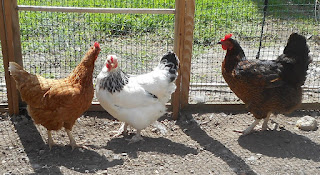 There has been a lot of turmoil over the last couple of weeks.  I started to describe the various events but found it too tedious.  After a lot of permutations of cars and chickens, I have ended up with one new car and two new chickens. Losing my van was hard, but it couldn't be repaired after some fatal engine event.  Luckily another car fell into my hands.  Then a complicated story involving chicken coop doors mistakenly left open over night, a raccoon, and an insecure fence.  I found one dead chicken in the morning and three missing.  To make a long story shorter, I acquired three new chickens, one of which was fatally wounded the next day by presumably the same raccoon.  I rushed the chicken to the emergency vet, but she had to be euthanized.  She is the farthest to the right in the picture.  Three of my old chickens returned mysteriously on their own, so I have the same number as before, but two new faces.  The next several  days have been spent trying to put up a new fence.  In the end, my neighbor who just returned for the summer (he lives in Arizona), saw me struggling and came over to help.  He ended up doing most of the work for me, and I am very thankful.  I probably would have got it up myself, but it would have been a shoddy job.

So that is an unemotional account of all that happened, but needless to say I was devastated.  I am recovering now, as we all do, but my animals mean so much to me that every time I lose one I am absolutely devastated.  These violent deaths are especially traumatic, and the fact that it was all my fault makes them all the more awful.

On a more positive note, the new parakeets are doing well, and Leah has pretty much won the battle about jumping up on the cage.  That cat is an acrobat, and you have to love her for her persistence and ingenuity. In the end I put a piece of plexiglass on top of the cage so she can't reach into it, so the only trauma for the birds is when she lands.  I have to hope they will get used to her.
Posted by Cheri Walton at 8:17 PM No comments: