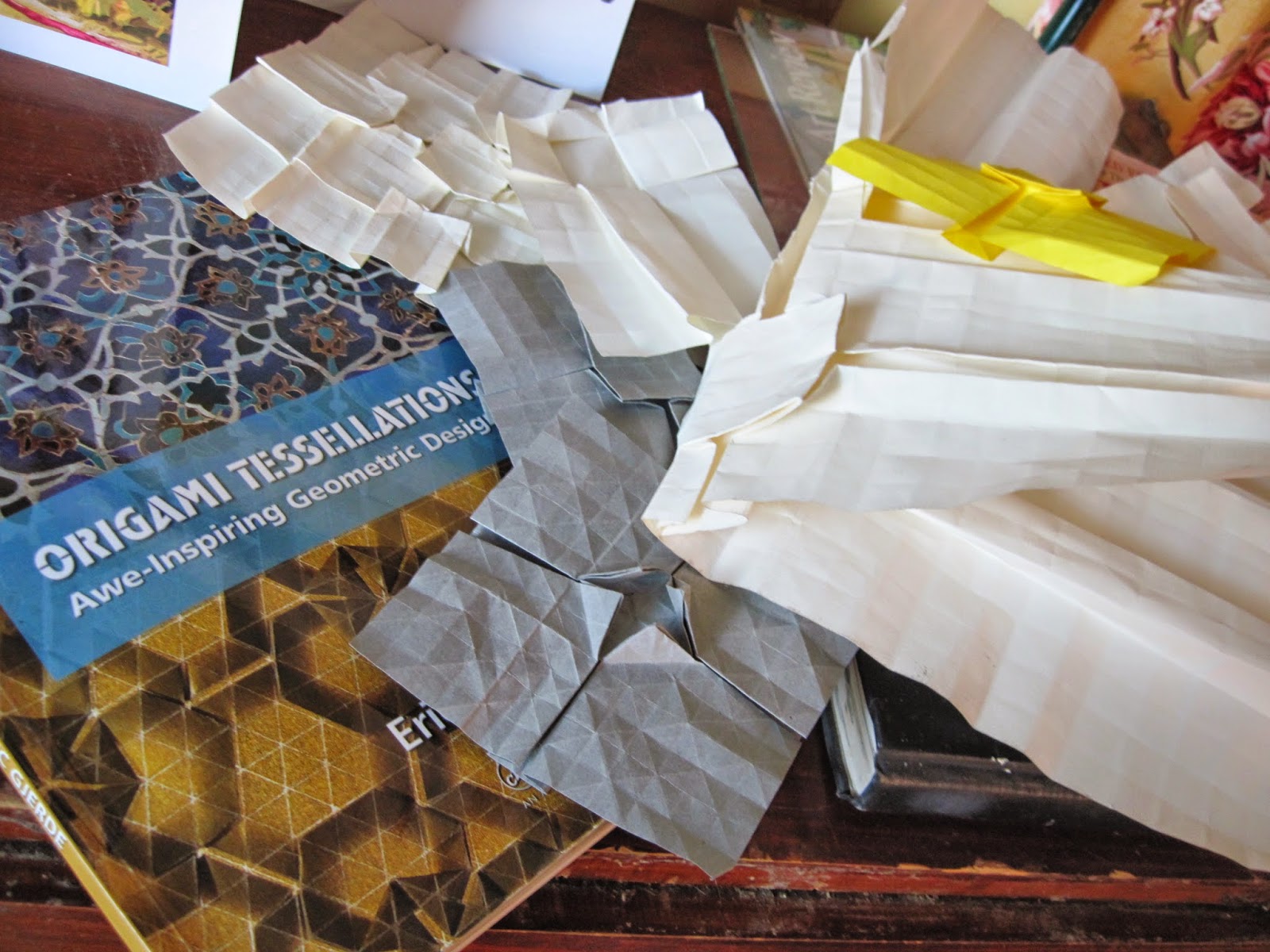 It's unbelievable how much time I've been spending on learning this one fold from my book on origami tessellations.  It's the very first lesson in my book, and even though I have managed to flounder through the folds, the way they actually work remains a mystery.  Every time I succeed I'm not quite sure how it happened.  The most obnoxious part of the process is folding the grid.  At least it's not difficult, but time consuming.  I feel like a chimpanzee at a typewriter (or a keyboard).  Of course I am aiming for the "awe-inspiring" results described in the book, but I'm beginning to wonder if I will live long enough to get to chapter 2.

I have to force myself to make my coffee in the morning and walk the dogs.  Usually I don't succeed and head straight for the book and paper I have put out of sight the night before.  I hope in vain that I will resist giving it just one more try while the coffee maker works, but even if I manage to pour a cup of coffee it sits on the table unnoticed until it is long cold. Next thing I know hours have passed while I struggle to understand the maneuvers required to reach my goal    I need to focus on other things, notably beginning to plan the solo art show I have committed myself to do in May.  Unless I plan on exhibiting hundreds of pieces of waste paper I had better get moving.

Right now I have more folding to do, though.........I promise myself just until I master the square.
Posted by Cheri Walton at 3:15 PM No comments:

In search of my Blogpal, an asside

Pamela, I am not sure my comments to you are getting through, since the "Books" site says no-reply.  I've lost the other blog addresses you gave me.  Let me know if we are communicating both ways:)
Posted by Cheri Walton at 12:32 PM 1 comment: 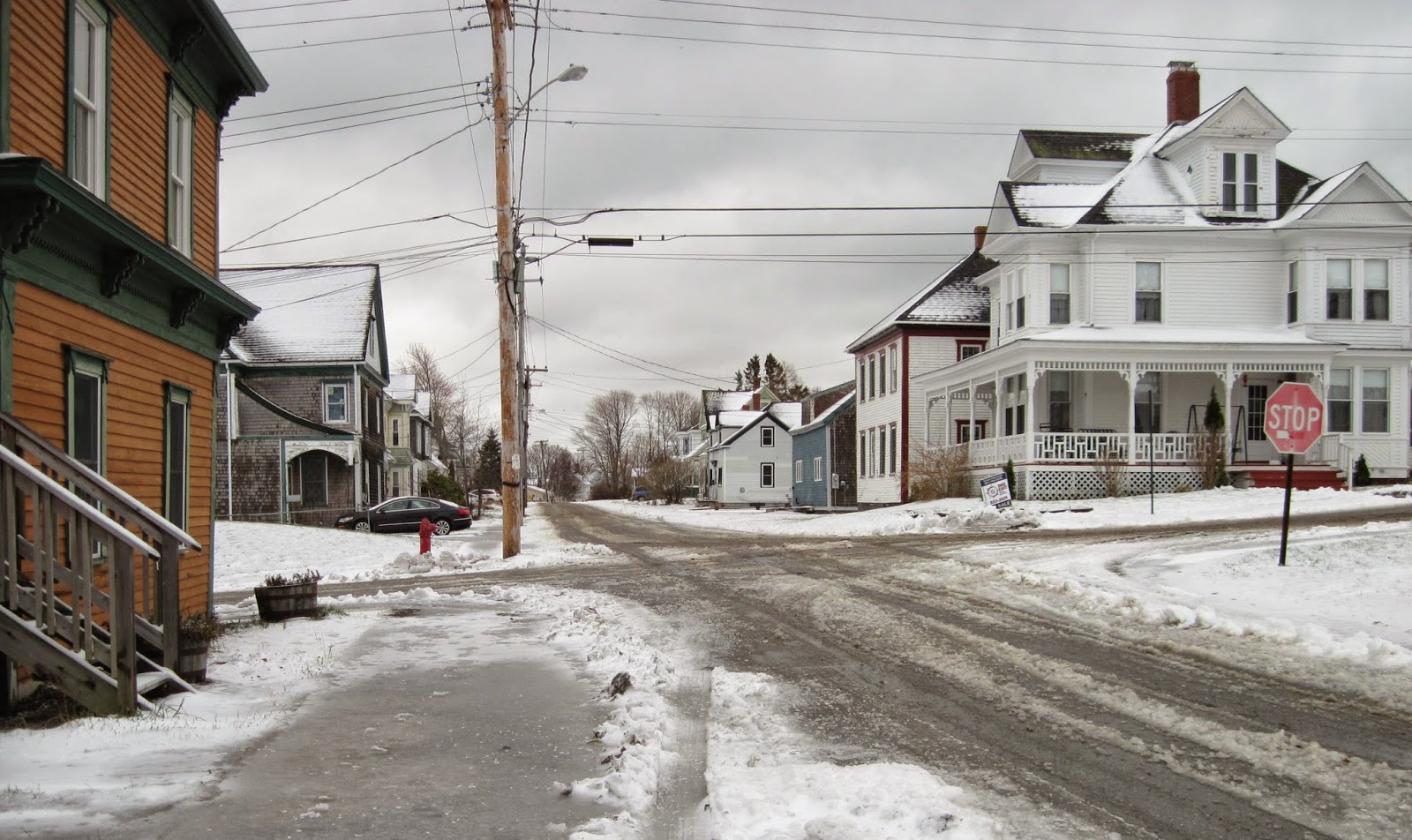 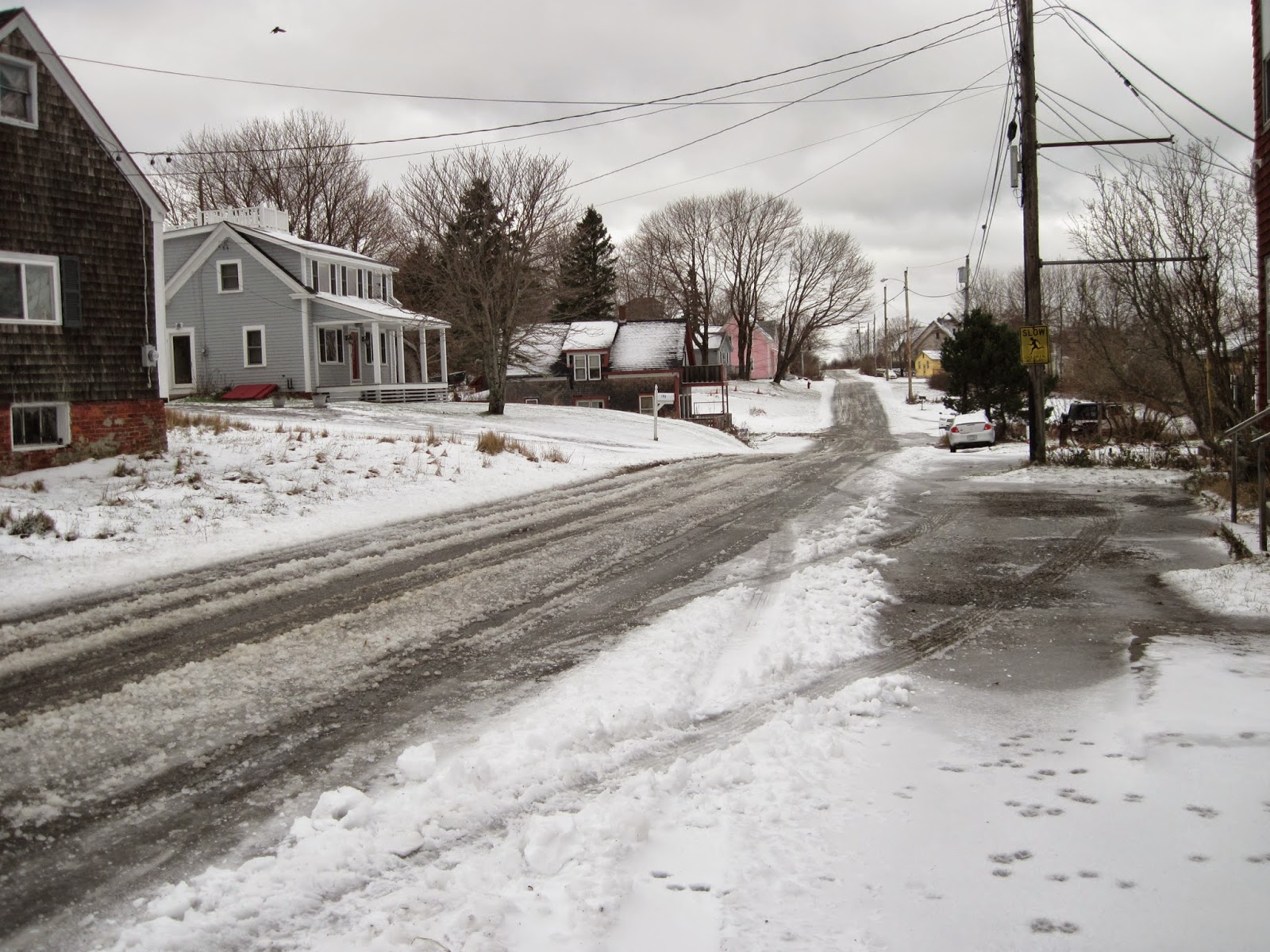 There have been storms all over the country, messing up plans for the holiday all over the country.  Not so for Eastport, though.  All we got was this slush, which has frozen now in a lot of places.  Willy, that naughty boy, got away from me this morning as I was so dutifully picking up his poop.  He disappeared and I spent about thirty minutes slogging through the mess looking for him.  When I finally spotted him with his leash wrapped around a bush behind a neighbor's house, he simply waited for me to untangle him, then raced away before I had a good grip on him.  I am almost never angry with my boys, but I must say Willy inspired a deluge of unprintable words from my usually genteel mouth.  It was another fifteen minutes or so before I spotted him again, this time racing toward town.  He stopped and looked back at me, waited until I was just a few feet from him, then took flight again.  Finally I was able to grab his leash as he stopped to investigate some irresistible aroma. I put him on a short tether and dragged him home, lecturing him the whole way.  He, of course was oblivious to my irritation until we got to the house.  Snapping his leash off and calling him uncomplimentary names finally  got through to him that I was angry, and when I refused to give him his usual post-walk treat he knew something was wrong.  He slunk upstairs and I haven't seen him since.

He has no idea why things took such an unfortunate turn, but he is laying low, no doubt waiting for the puzzling storm to pass.  I ought to call him down, and I will in a little while, but thoughts of the winter ahead keep me in a less than charitable mood.  I see the near future,  me trudging after him through snow banks as high as my waist, slipping on ice-covered driveways, struggling through neighbors' unshoveled yards, peering under porches....well, you get the picture.  Willy, Willy, Willy. 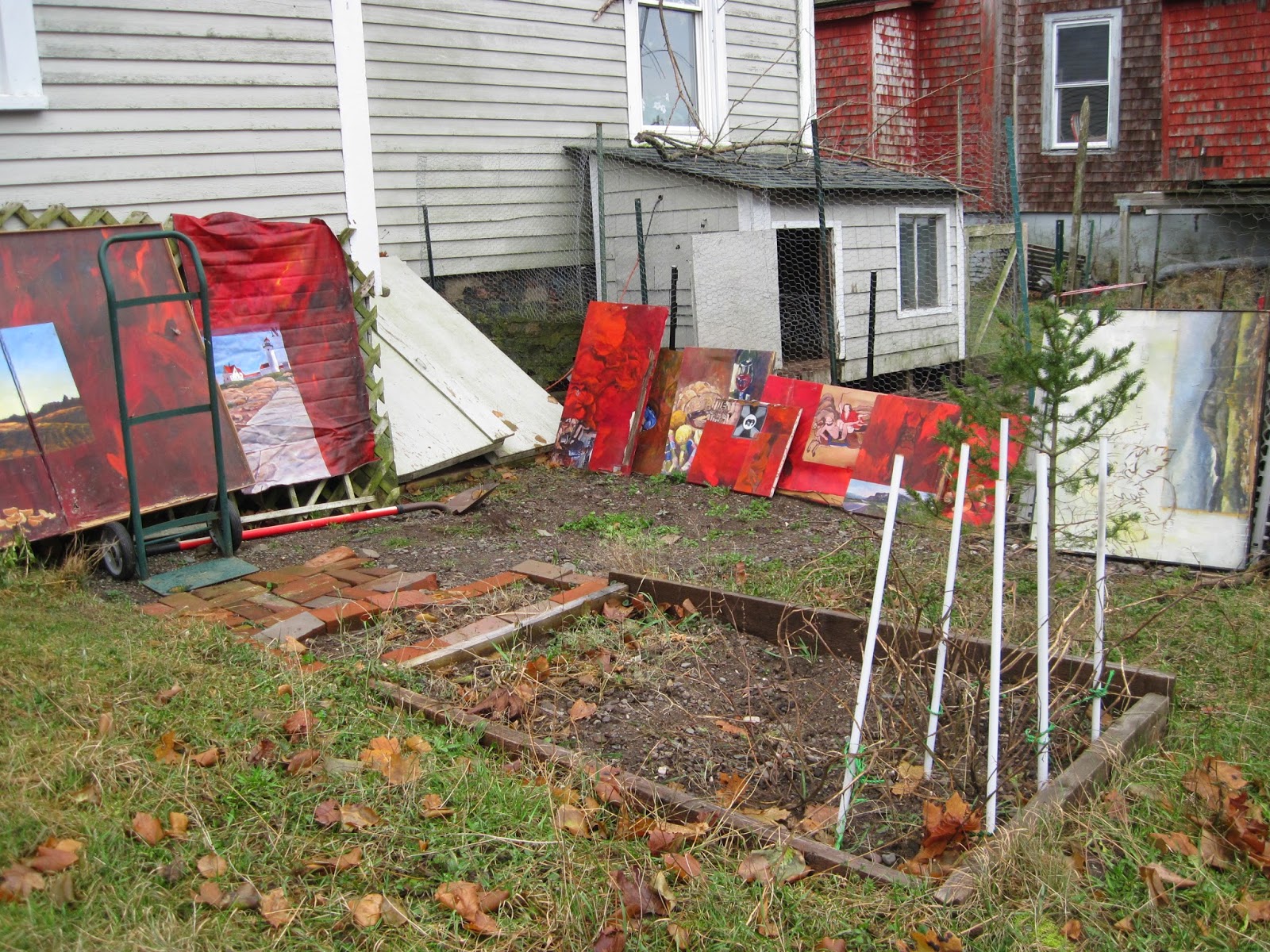 When I moved here twelve  or so years ago I brought with me all the paintings I had done as an art student in the 80's and 90's.  They are very large and storage was a problem, so I put them in the cellar.  To save space, I had already cut many of them off the stretchers and rolled them up.  I forgot that I had a wet cellar  that was far from appropriate for storing such things as artist canvas.  Fast forward to the present.  This morning I went to collect the paintings in anticipation of a big show at the Arts Center this spring.  What I found was mold, slime, and rot.  The paintings had come loose from the stretchers and rotted along the

edges.  Some of the canvas tore when I touched it.  At first I couldn't find the paintings I had rolled up, but as I gingerly pulled the soaked mess away, I saw an old black nylon bag I recognized as one of my old outdoor painting bags.  Closer inspection revealed what looked at first like a pile of wet newspapers.  It was actually a pile of soaked and moldy canvases. 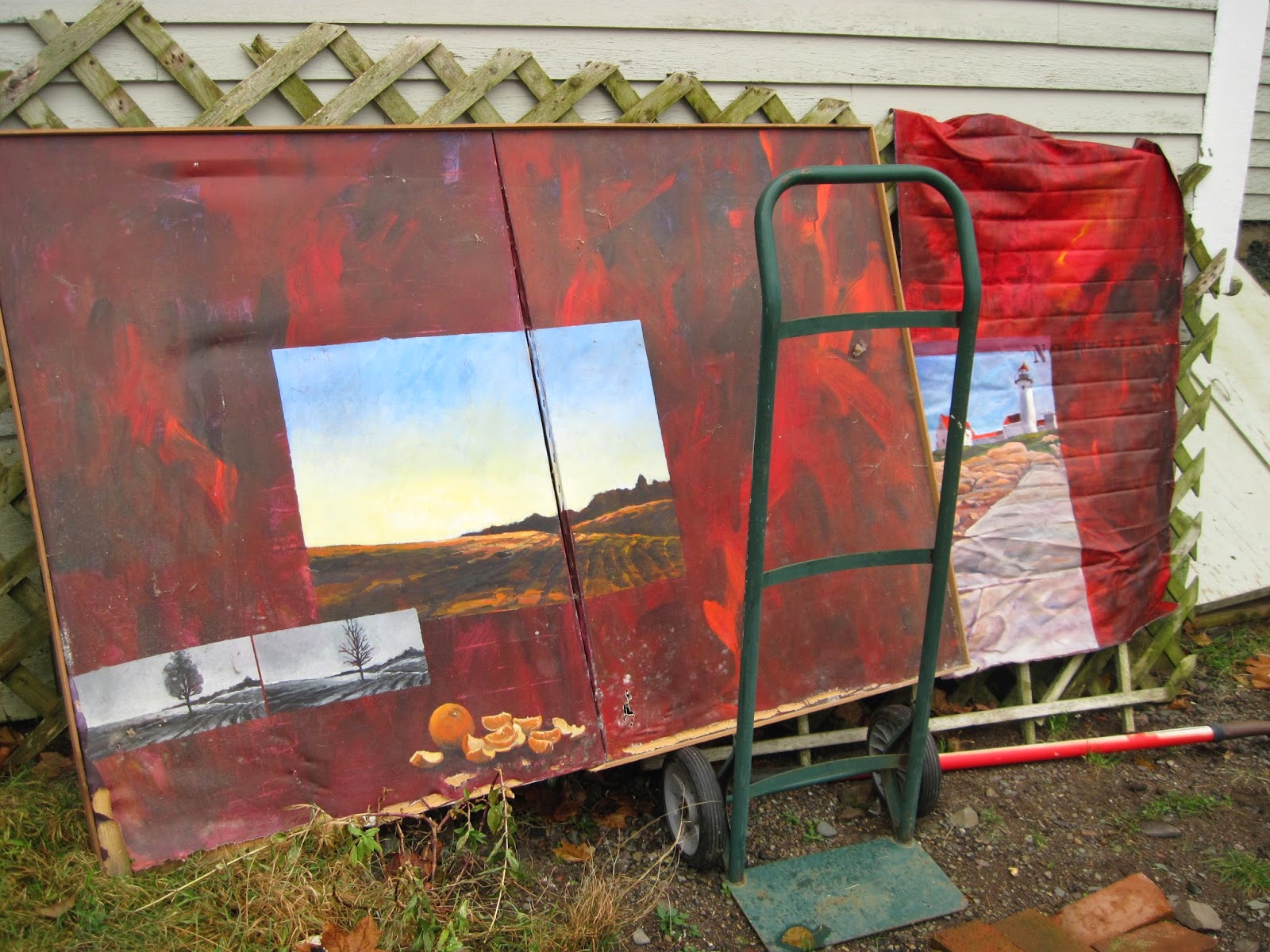 Well, I was philosophical about the situation,  aware of the fact that  nothing lasts forever.  My concern was my plans for my show.  So I sorted through the mess and salvaged some of the least damaged paintings.  I hauled them into daylight and set them out to dry.  The sky is threatening rain, but these works are obviously no stranger to water and maybe they will survive a good bath.  Whatever happens, I will have to cut them down and glue them onto something solid....perhaps masonite. 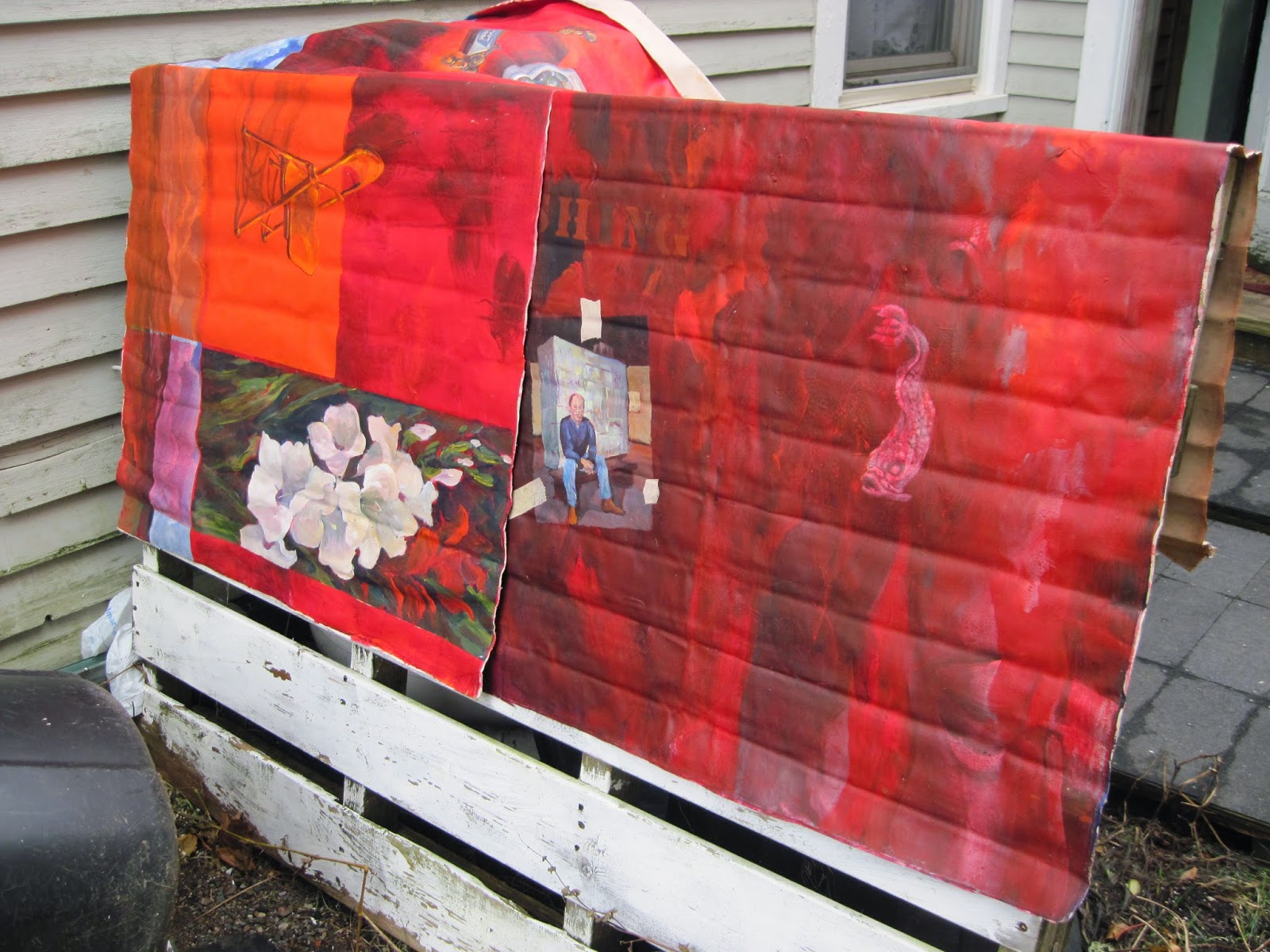 If I were a different person I might have been sad and upset at looking at the rubble that had once been the outpouring of my confused and desperate mind .....the evidence of my anguish, the visual manifestation of my otherwise unbearable turmoil.  Probably this rubble saved me from suicide a hundred times.  But now it conjures up only some bland memories seen from a great distance, and indescribable gratitude.
Posted by Cheri Walton at 11:30 AM 1 comment:

What have I been doing? 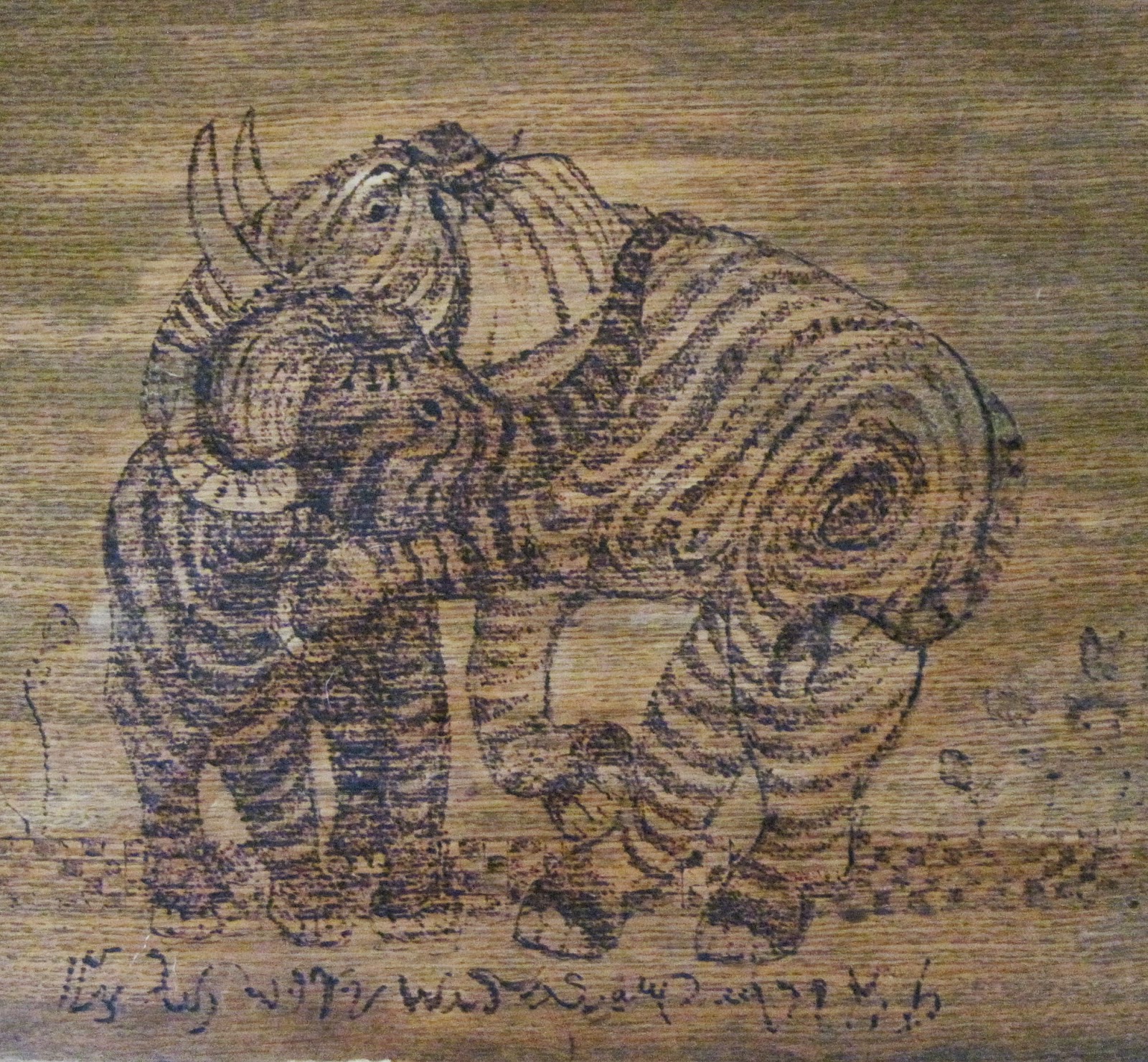 After a relatively long hiatus that I really can't explain, here I am. I have been busy trying to get some control of my finances, which takes much more time than I want to give it.  I have also been producing various kinds of artwork.  The most recent is woodburning on this table I found on somebody's lawn.  The picture is as it sits now, completed mere moments ago.  I plan to finish it with polyurethane once I am sure I'm done.  It's an image from a book of Asian needlepoint designs.  I did in on 14 count needlepoint canvas many years ago and the pillow I made still sits in a chair in the living room. I tried to find another design for the table, but nothing pleased me as much as this. 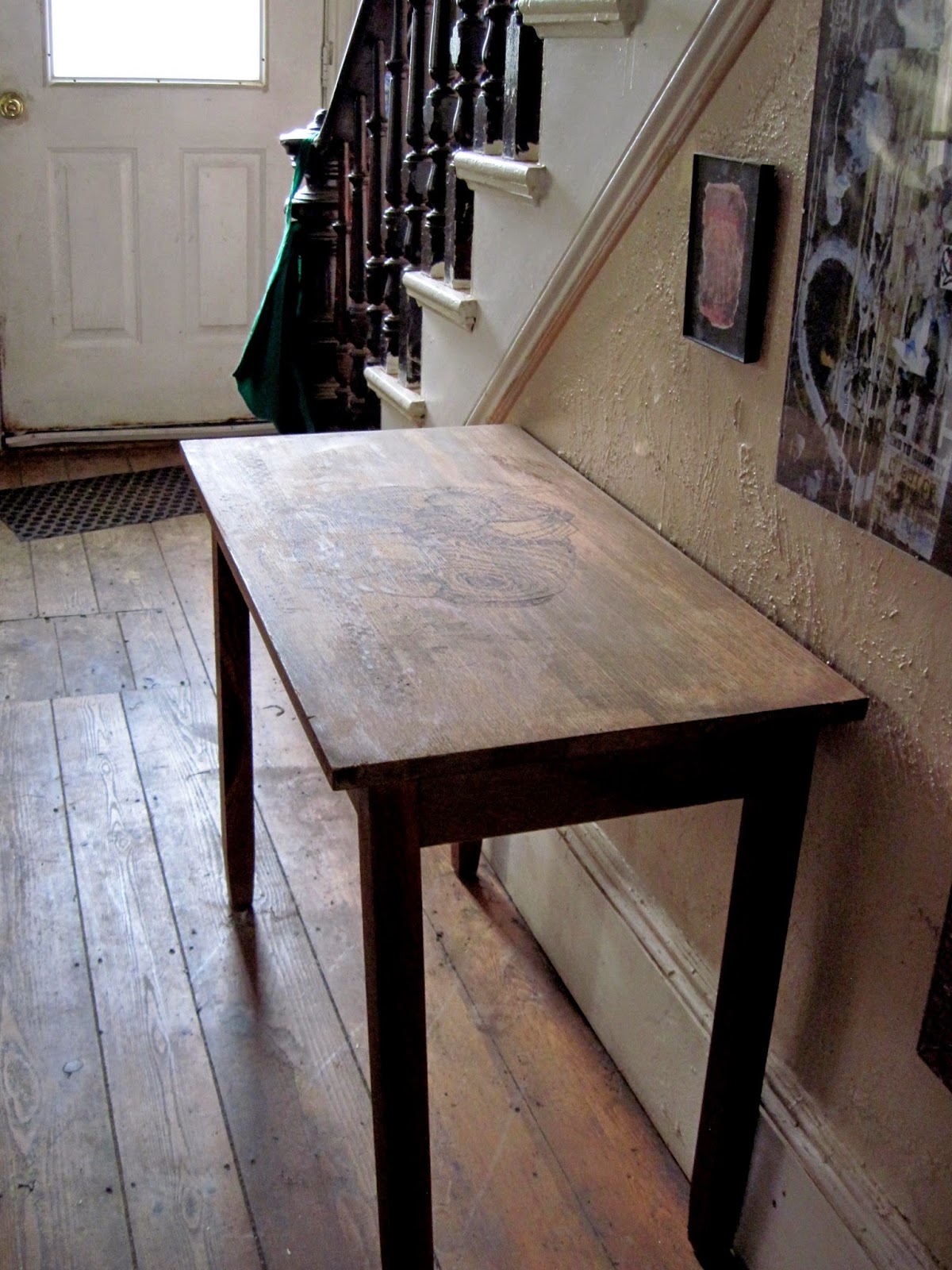 Here is the table "in situ," ........really nice little table with a drawer.  I spotted it at the top of the hill coming back from the dog park.  There were several pieces of furniture in front of an empty house with a for sale sign in front of it.  I'm assuming that they were abandoned after a bigger yard sale.  I originally was attracted by a bigger table, and went back to get it after taking the dogs home.  I wrestled it over to the side of the road, but no matter what I tried, I wasn't able to get it into the trunk of my car.  As I stood there despairing, my friend Lindy appeared on her bicycle.  She offered to help, but after several failed attempts she went home to get a truck.  While I waited for her two good samaritans in trucks stopped, proving that chivalry is not dead.  The other pieces of furniture sat tantalizingly in front of me, and before Lindy returned I had put this smaller table into my trunk. Together we loaded the bigger one in the truck and I drove home.  After a short wait Lindy appeared with my table and a big cabinet she had pulled out of the dumpster at the same house.  I used that table as an island in my kitchen, replacing the table top on two file cabinets I have been using.  I'm happy with both acquisitions. 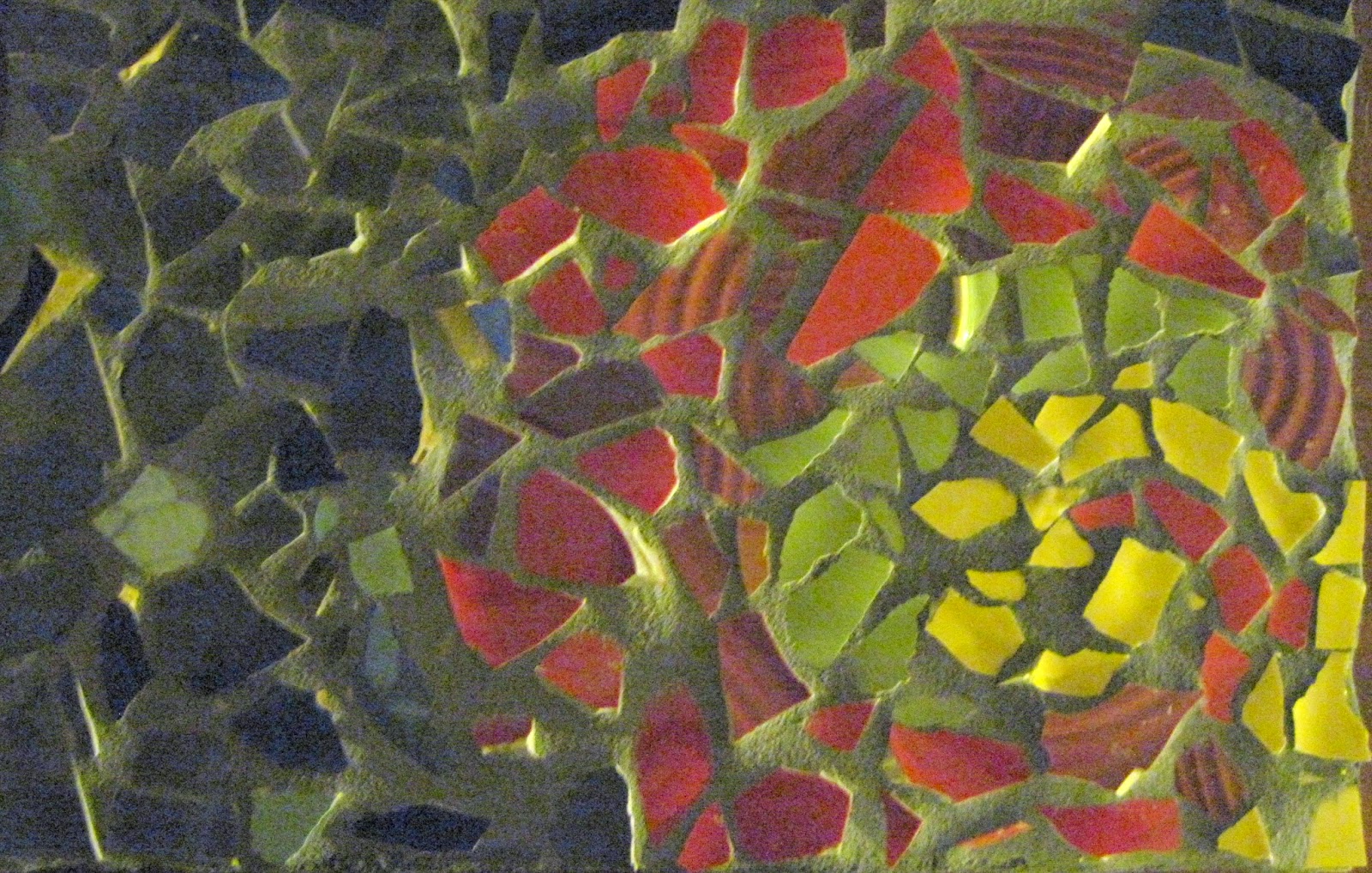 Next is the pathetic result of my attempt at making mosaics.  I enjoyed doing it at Lisa's studio, where she showed me how to do it.  The first design I made I dismantled before gluing it, then proceeded to do this one.  The idea was good, but the execution leaves a lot to be desired.  My plan was to produce the ever-amazing (to me) Fibonacci  curve.  I was unable to accomplish it beyond this barely recognizable image.  It was fun, though, and I look forward to trying it again. 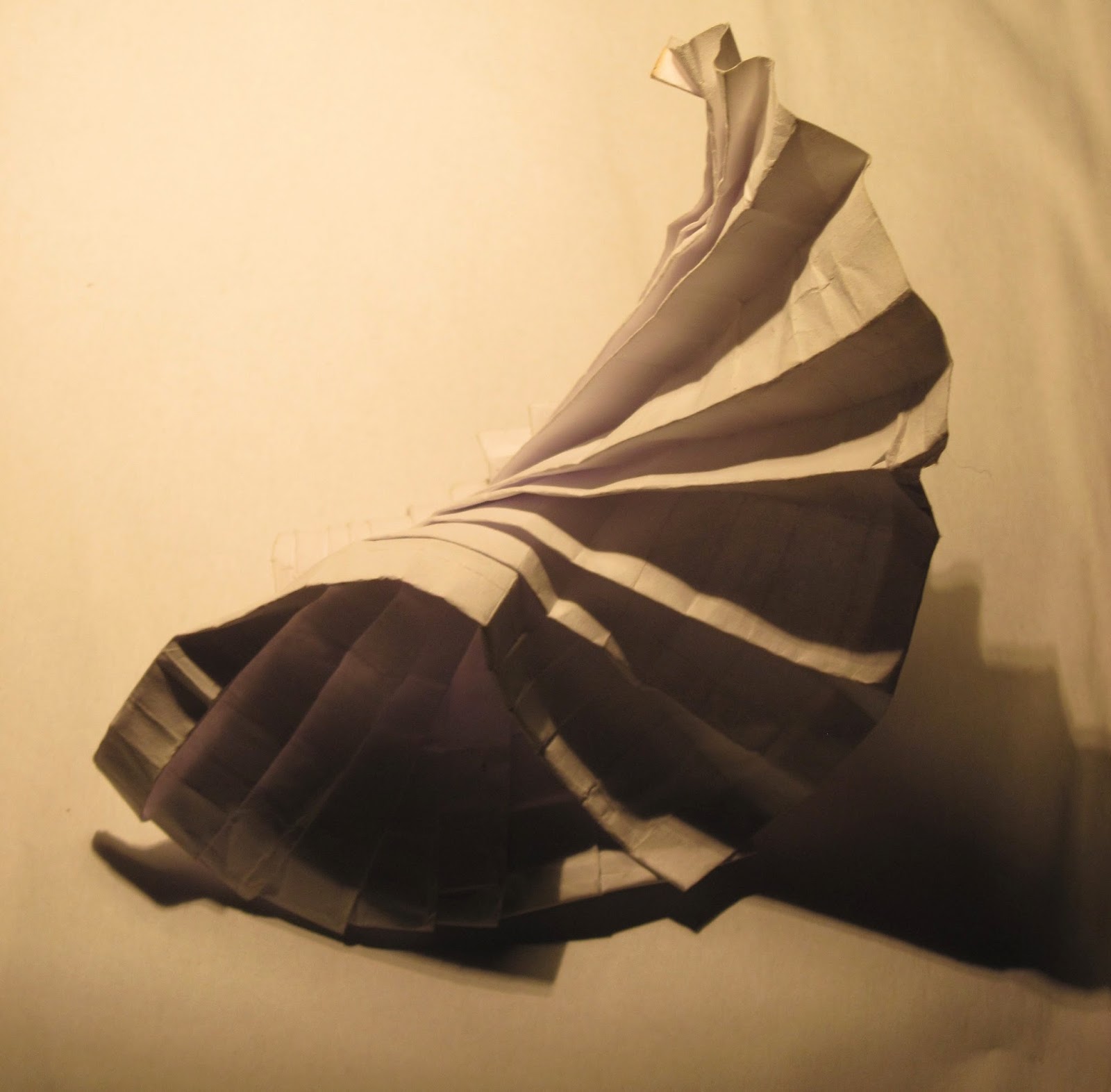 Finally here are two pictures of the same paper sculpture.  Paper folding is so intriguing to me and I return to it every so often.  It is a form of origami, with a different focus.  I was introduced to it in art school in first year sculpture class......I was a non-tradional student in my 40's.  Right from the beginning I was crazy about it.  I have several books on the subject and am still amazed by the mind-blowing things people do with it. 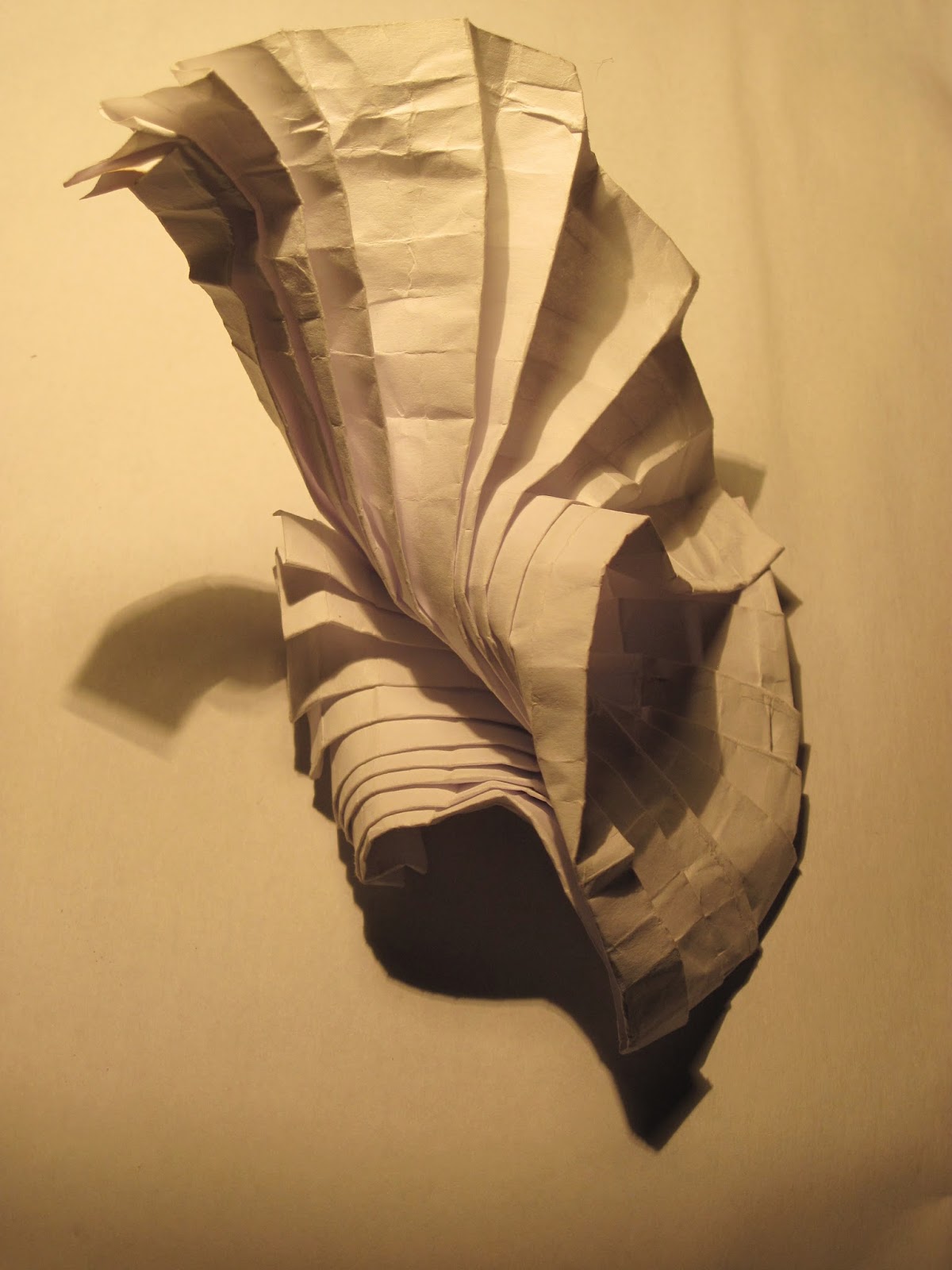 So that's what I've been doing, with the notable exception of participating in a show at Lisa's gallery last week. The reception was the usual gala affair with food, drinks, and live music.  The regular art crowd was there and we all had a good time.
Posted by Cheri Walton at 2:59 PM 1 comment: