I have several of these plants that all originally came from cuttings that I got from Roberta Belgarde.  She was my elderly neighbor when we lived in Newburgh in the early 70's.  Jesse was a baby, and Carrie was two years old.  She often invited me for lunch and babysat when I had to go to the doctor.  In front of her kitchen window was a dry sink bursting with Christmas cactus.  She gave me a cutting so I could start my own plant.  Over the many years since then (Jesse was born in 1974) I have continued to root cuttings from that plant and although the original doesn't bloom much anymore, its children thrive.

I think fondly of Mrs. Belgarde (I always called her that) every time these plants blossom.  This year they are particularly prolific.  The mother hangs in the kitchen, and its offspring are scattered around in the dining room and living room.  This year they seem to think Christmas is coming early.  I can barely take my eyes off them.

Carrie has one of the offspring in her office in New Hampshire.  She has never been interested in plants, but I guess to humor me she consented a few years ago to take one  small cutting.  She named the plant Rhonda and has become quite fond of it. It happily blooms for her around Christmas every year.

You never know how you are going to be remembered after you die, and I'm quite sure Mrs. Belgarde never thought that she would live on in our minds and hearts because of these plants.  Another plant I have is a memorial to my aunt Faith, my father's sister who died many years ago.  Her daughter, my cousin, inherited the Begonia she had on her dining room table for years and years.  It was huge, and Beth divided it up among the cousins,  I have since divided mine so that I have Begonias  all over the house.  Faith lives in my memory because I never look at one of them without her crossing my mind.

Time with Annie Dillard, May Sarton, and Elliot 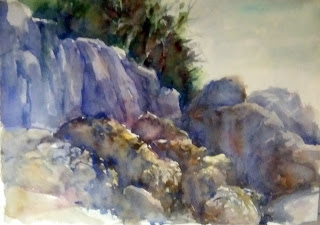 This is the latest attempt to regain my expertise in watercolor.  I'm getting there, I think.  This is from a photo I took down on the beach below my house....I don't remember when, but I was obviously walking under my own steam, so it was at least two years ago.  My hip surgery has been postponed yet again, so I guess I will be grounded for the foreseeable future.  I am not upset by this development, since having surgery during this pandemic is a risk I don't really want to take.  I am so used to using my walker that it hardly seems like a handicap anymore.

I watch the developments surrounding our presidential election with some trepidation, but I have some vague faith that all will work out in the end.  The only lasting consequence for me personally is my disbelief that the country could get into such a mess. I guess I could have anticipated that Trump would behave badly if he didn 't win the election, but not how badly.  The other depressing thought I have is that so many people supported him and, unbelievably, still do.

Meanwhile I go along with my reclusive life, pretty much unaffected by anything that goes on outside of this house.  I have my wonderful little dog to keep me company, my books and my paints to entertain me.  I ordered a new Kindle which came a few days ago.  I don't know what I'd do without it.  While I waited for it to come after my old one died, I amused myself by re-reading "An American Childhood" by Annie Dillard.  It is one of my favorite books of all time.  My Kindle died in the middle of May Sarton's journal at 80.  I look forward to returning to it where I left off, but I must say I find the woman a little unlikeable at times.  So what, though?