I finally have a picture of the painting I have been working on for so long.  It's 8 feet long and 2 feet high, done on 6 inch squares and then assembled to make one image.  It was hard to get it all in one picture, and the panorama setting on my camera baffled me.  Nevertheless, this is a pretty good representation of it except for the missing head on the guy standing up on the right.  I'm quite happy with the results and am growing weary of working on it.  I doubt I will do more.

My posts here have been neglected because of my recent enthrall with facebook.  I am growing addicted to the immediate response I get to my posts.  I expect the fascination will lessen......I hope it will.  Here I am free to wander around in my head, and even though it is still electronic media it seems private enough to ramble.  It is less a news flash and more a stream of consciousness.
Posted by Cheri Walton at 10:40 AM 1 comment:

Out Of the Past

Wow, talk about ancient history!  My ex-husband sent me this picture, having found it in some box of memorabilia.  1963......my  high school senior prom (do they still have senior proms?).  My boyfriend Don, dressed in his rented tuxedo, me in my formal, are standing in front of the fireplace in the house where I grew up.  Behind us is the sunburst clock that was the fashion of the time.  I remember that hairstyles were big.........but I had forgotten just how big.  I had been to the beauty shop the day before and slept with my head wrapped in toilet paper to preserve my "do."  Probably that was the happiest night of my life, its intensity increased by the fact that I knew Don would be leaving soon to return to his home in New Mexico.  Relationships with "base rats" were dictated by the whims of the military then.  Any friend, or lover, who was in our high school because his father was stationed at Dow Air Force Base could be snatched away at a moment's notice.  In Don's case, his father was retiring that summer.  The family was moving home to Albuquerque.  He was to become a freshman at the University there, and I was to go to the University of Maine.

I can't begin to describe the agony of that parting.  So far in my life nothing can compare with it.  I won't belabor the point, but for four years we wrote every day.  The letters came in envelopes specifically designed for "AIR MAIL," with the stamps on them upside down, indicating love.  The long distance relationship prevented me from even considering dating anyone else, even had I had the opportunity......which I did not. I don't know what either one of us was thinking, clinging to each other in some undefined hope that we would be reunited.  Gradually the letters became fewer and fewer, and then ceased entirely.  What a slow, painful death our relationship suffered.  Why we never broached the subject of reuniting I don't know.  It was too vague a concept, I guess.........an impossibility that we tried to ignore.

We did not forget each other, though.  After my marriage ended I wrote him a letter, to which he replied with a special delivery note.  He, too, had a failed marriage.  We took up our long-distance relationship again.  The romance was gone after so many years. Neither one of us even thought of reviving it.  But we became fast friends.  We are in contact to this day.  Every year I receive several expensive Christmas presents from him.  I have visited him in Albuquerque three or four times and he has come to Maine, I think three times, to see me.  We talk on the phone occasionally.  It is an uncommon connection, I think, and one we both treasure.
Posted by Cheri Walton at 12:29 PM 1 comment: With daylight saving time came the first thaw.  How much of the snow will melt before we have more snow is, of course, unknown.  I took these pictures while walking with Willy (Patrick opted out).  This first one is part way down Clark St as we walked toward the water. 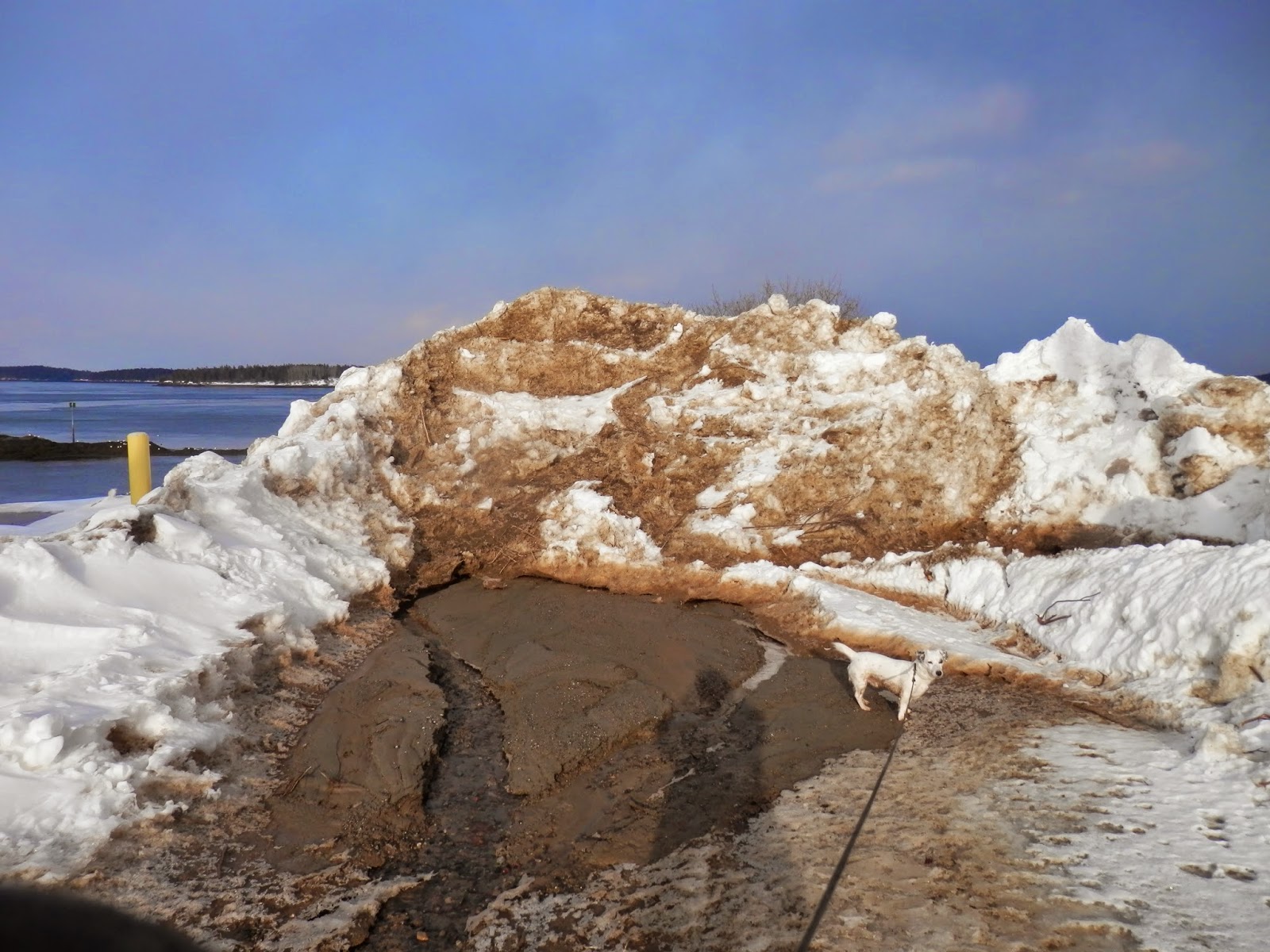 This is the end of the street where so many lovely pictures have been taken in the past.  The plow is responsible for the snowbank. 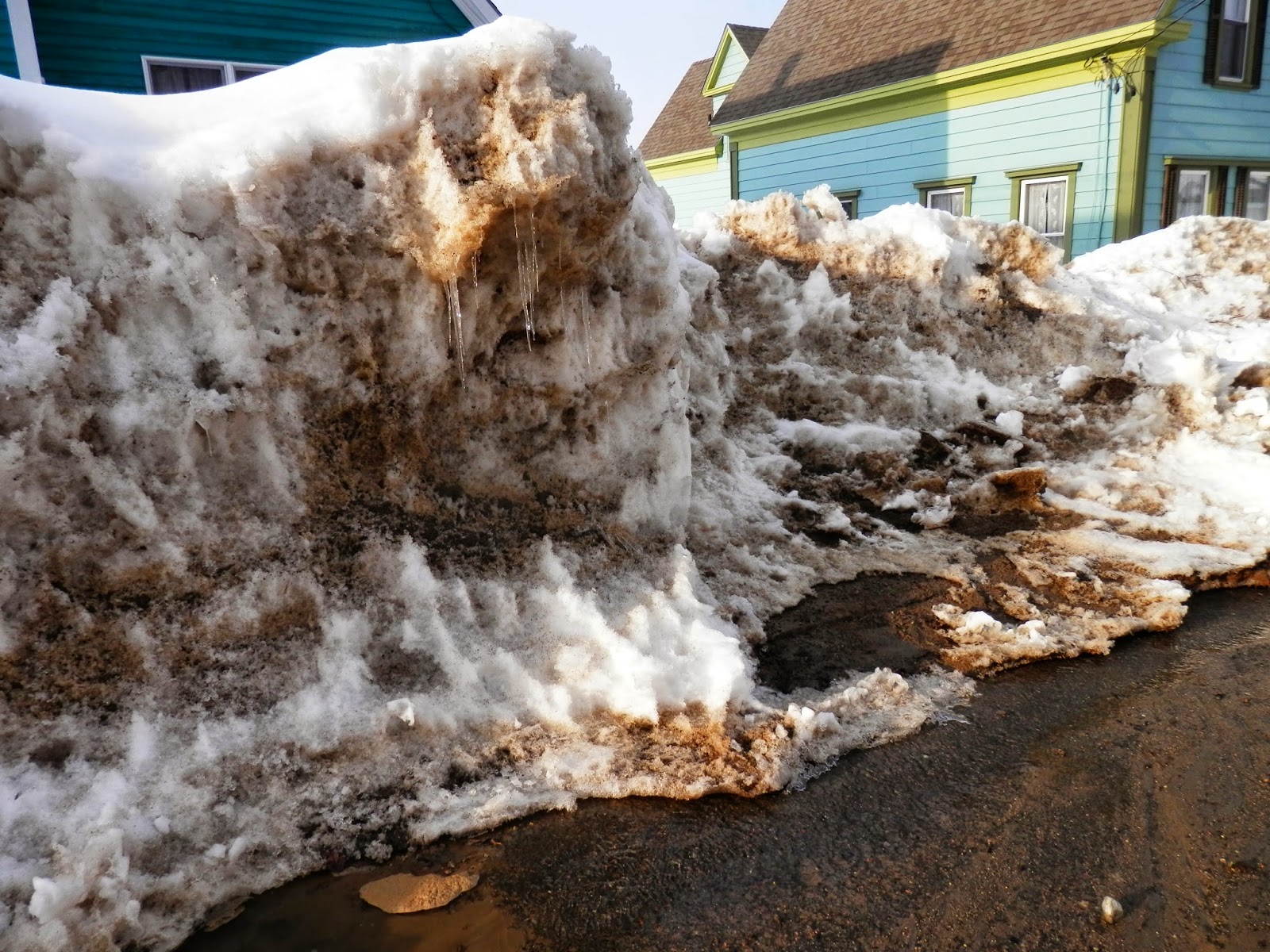 Here is another Clark St drift, slowly melting and freezing again. producing caves and stalactites as nature is fond of doing on scales big and small. 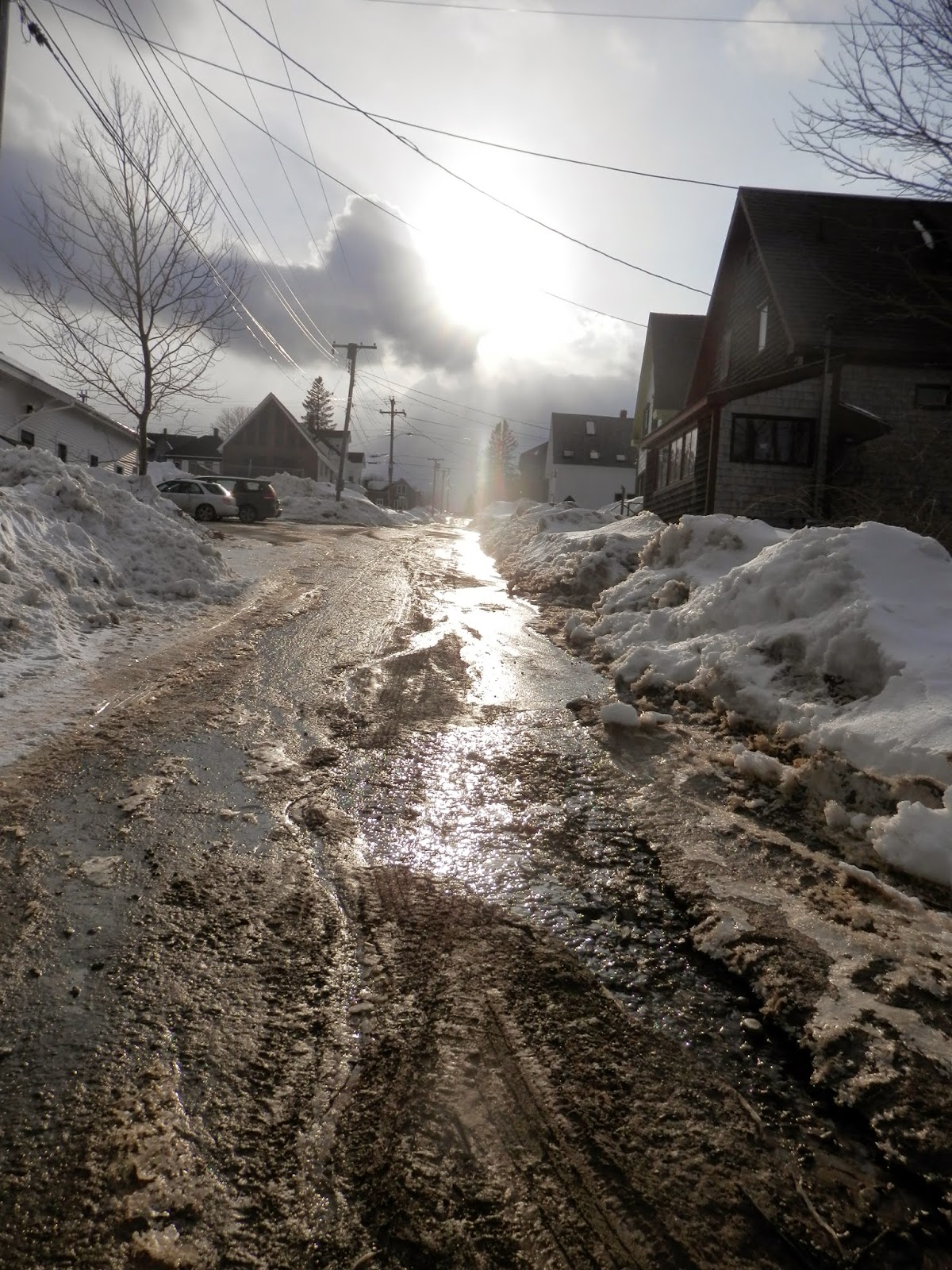 This is my favorite picture, which amazed me when I downloaded it because I took it looking straight into the sun.  I couldn't see a thing through the camera lens, but I loved the sun on the melted snow running down the street.  It is a regular occurrence...........water ripping up the pavement on its way to the ocean.  No attempt is made by the city to pave the end of the street, but every year they try to keep up with the huge holes left by the running water.  They never succeed.
Posted by Cheri Walton at 5:24 PM 1 comment: 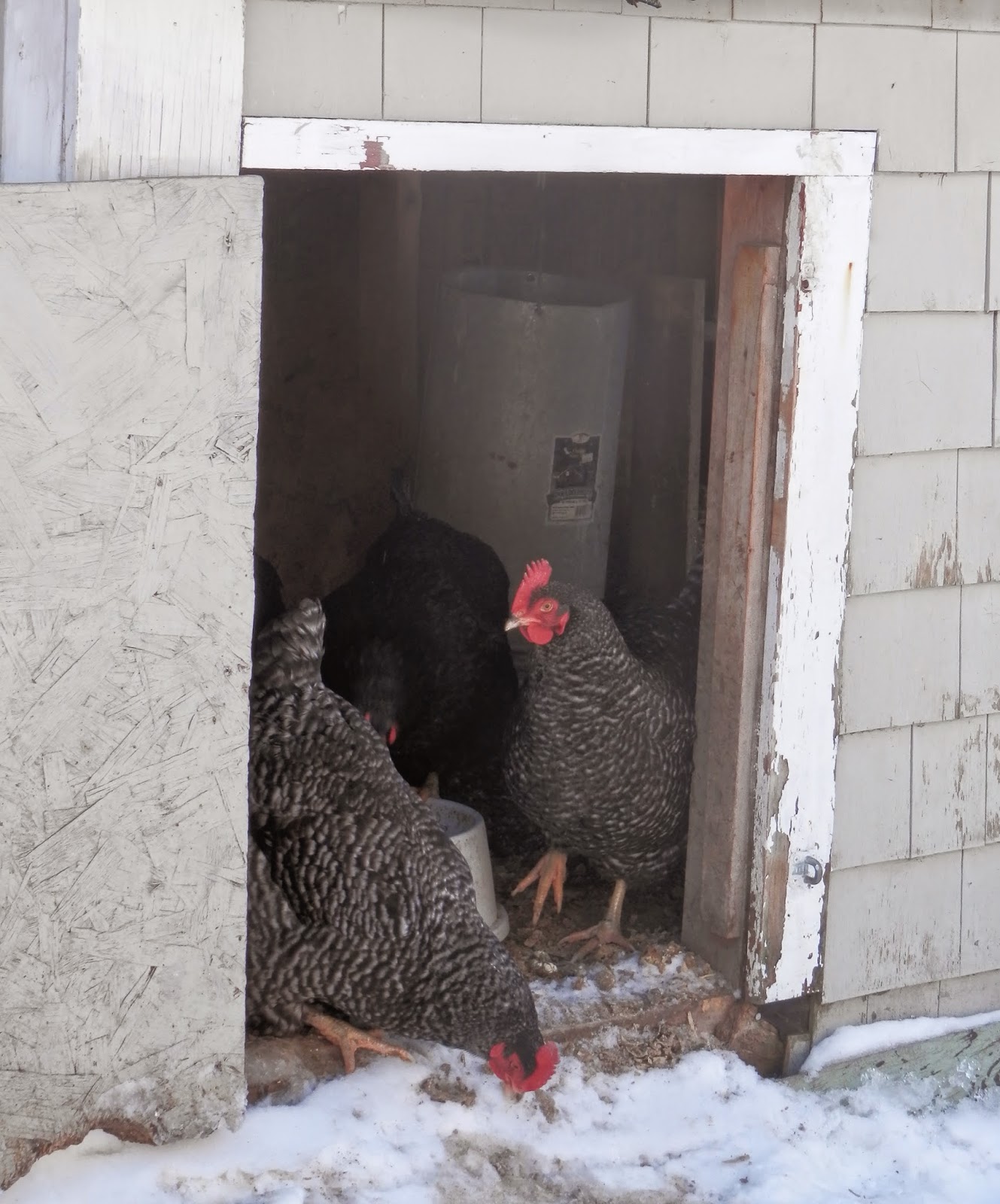 Today was a sunny day at last, with the temperature a balmy 17 degrees.  I decided to give the chickens some fresh air,since they have not been able to get out for weeks.  They were certainly happy to see the world, but they weren't interested enough to go out in it.  Dottie put one foot down, but changed her mind.  They all took turns sampling the snow from the doorway, though.  I left the door open all day, hoping they would enjoy a change from looking at four walls.

This morning I read some entries in a blog about taking care of chickens.  I felt very guilty about the way I care for mine.  The author talked about what a chicken environment should be, complete with pictures of her coops which are nicer than my house.........certainly cleaner.  She emphasizes ventilation, light, and fresh air.  All of these are pretty much absent in my girls' world.  Their one window fogs up so they can't see through it, and the only fresh air they have comes through two silver dollar size holes I drilled in the end walls.  Of course the door does not close tightly, so maybe that counts.  She recommends artificial light to keep the chickens laying eggs all year round.  I opted out of that from the beginning, thinking that the natural day-night rhythm would be better for them.........and give them a vacation from egg-laying.  If I were in their place, I would certainly need a vacation from producing one of those monstrosities every day.  I don't know how they stand it. 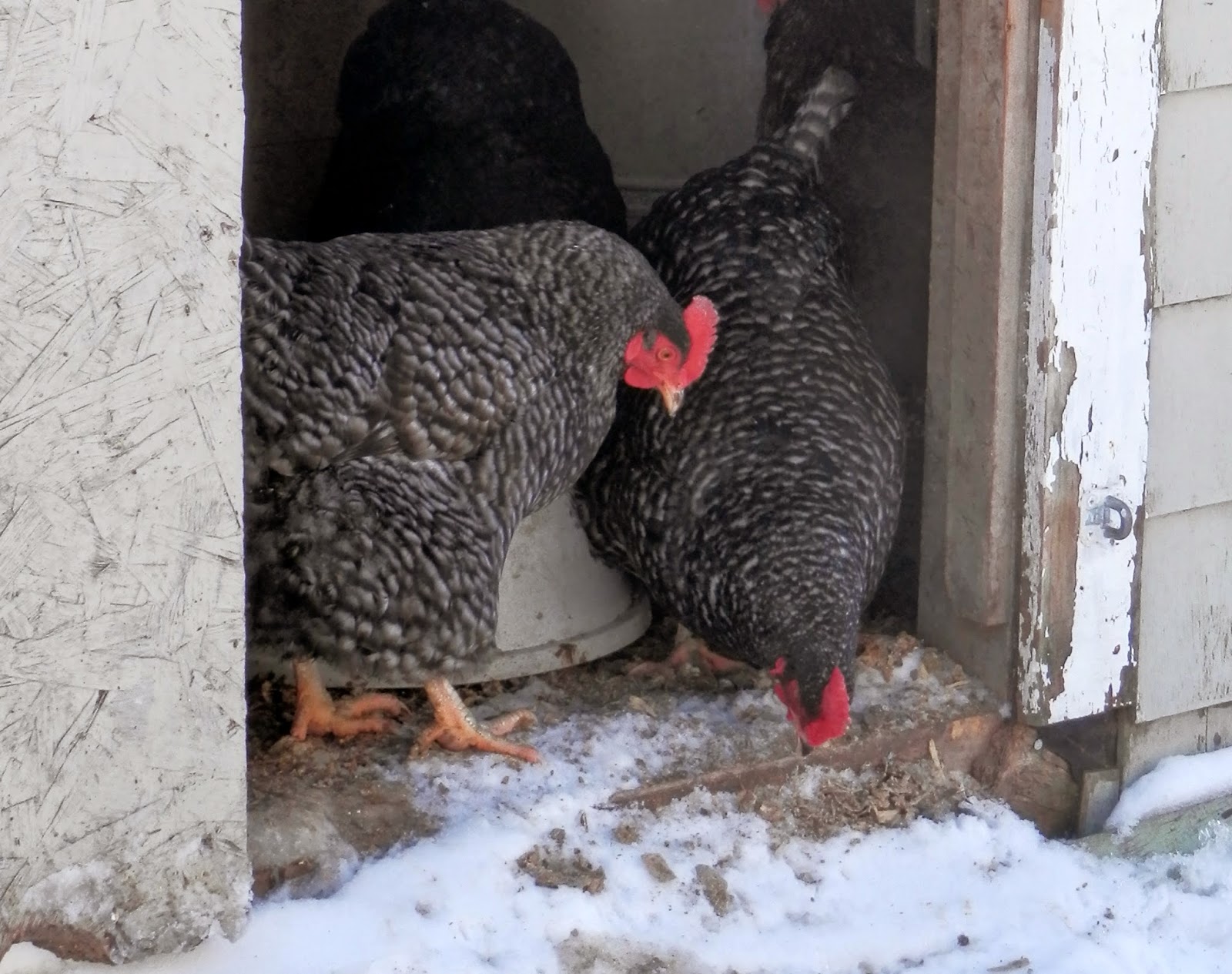 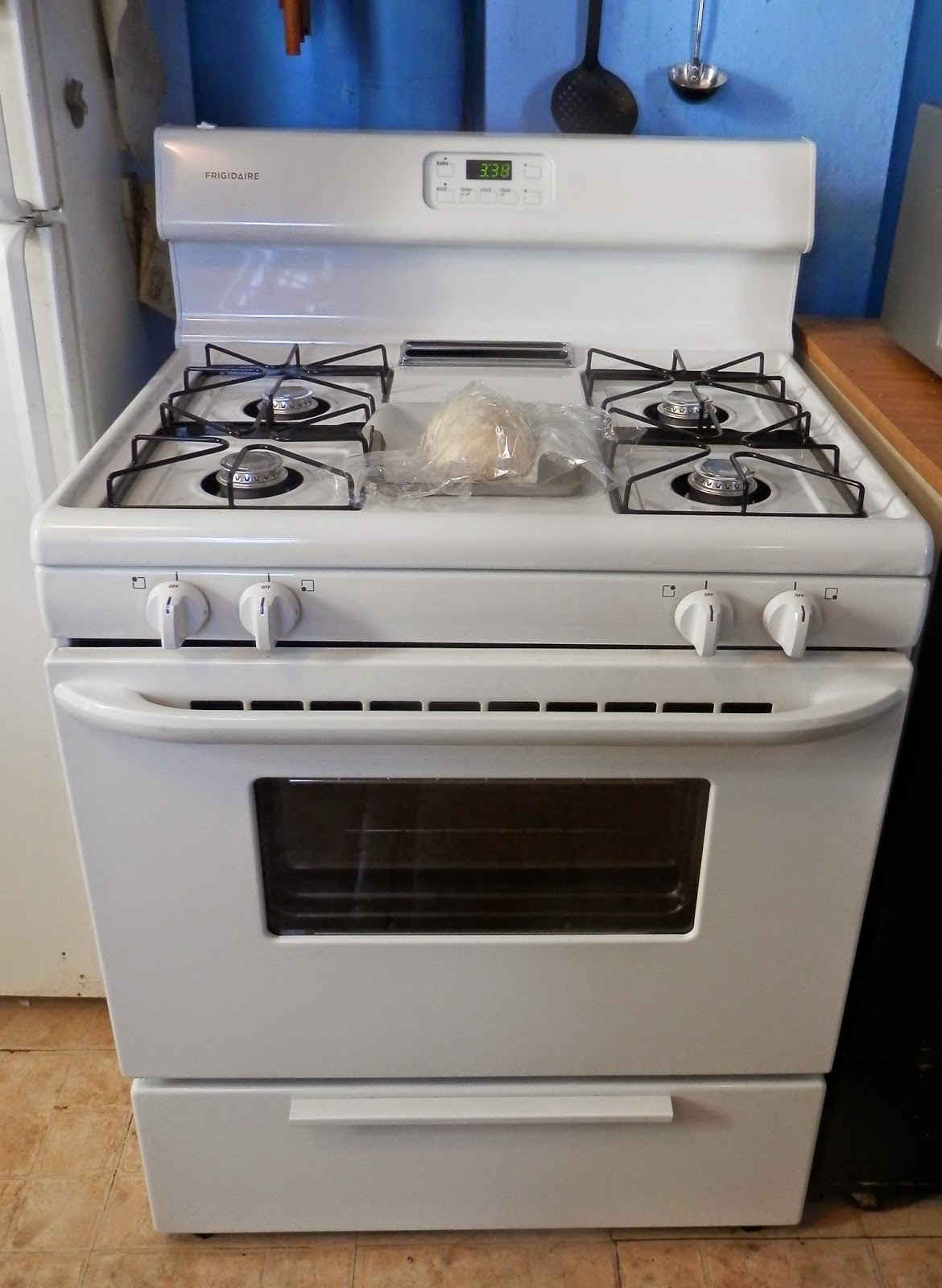 My happy news is that I finally got a new stove.  I have been without one that works since October.  My landlady, wonderful as she is in so many ways, is never happy to spend money on her rental properties.  She seems to realize that she will have to do her landlady duty eventually, but she drags her heels and makes sure her tenants know that they are totally at her mercy.  She insists that she is making no money and is crazy to have rental property.    On the other hand, there is almost nothing she doesn't allow us to do with the property.........this house is mine to do with as I please.  For that, I will happily (pretty happily) wait six months for a stove.  This picture shows it waiting for its first job.........baking a loaf of home-made bread.  It wasn't a complete success because I'm not familiar with stoves under fifty years old.  I didn't know that the oven would shut off at the end of the cooking time I set with the timer.  I set the timer much earlier than the full cooking time so I could check on it.  It wasn't until I checked again ten minutes later that I realized what had happened.  The oven had cooled with the bread half done.  I turned it back on and left the bread while it heated up and resumed baking.  In the end the bread was satisfactory, but certainly not up to my usual standards.  Today I made cinnamon rolls with the rest of the dough and they are perfect.
Posted by Cheri Walton at 7:35 PM 1 comment: