And One More Time 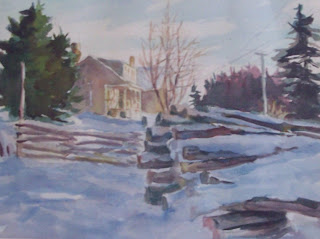 Having experimented with this image in oil and pastel, I couldn't resist trying it in watercolor, too. There's no doubt that watercolor is a lot of fun. The way the colors mix on the paper makes such beautiful washes. I don't think the light in this one is as good, though. Just now, looking at it, I'm thinking I might put some strong white places on the snow with gouache. I got so carried away with my blue paint I forgot to leave very much white paper. I'm going to go try it right now........ 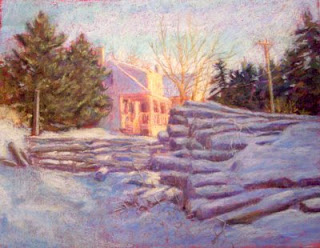 I was so entralled by the light in my photo of Ann's that I decided to try it again in pastel. I wondered if the glow of the house would seem brighter.........plus, I felt like getting my hands into some chalk again. It's amazing how much the oil painting and the pastel look alike until you take a closer look. I think that the oil painting actually got the light a little better, but I love the way it looks here. I was much more adventuresome with the color. It's hard not to be when there are hundreds of pieces of chalk, each one a different color, staring you in the face. It's so much fun to layer them and watch them change.

I started this one the same as my Epping Road paintings, on a piece of watercolor paper painted with red acrylic. I used the cold red this time though, alizarin crimson. And it's bigger than the Epping Road pictures.......probably 16X20. Since I can't cut a straight line, I'm not sure.

We are in the middle of yet another blizzard, so I spent most of the day upstairs in the studio. I took lots of pictures first, though, from the few places I could get to. I posted some earlier, but there are some others that I want to try painting. It appears that I will plenty of time. I am going nowhere for the foreseeable future. 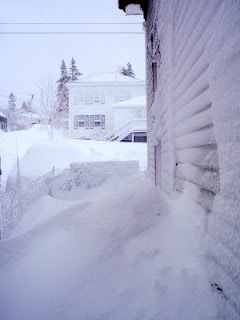 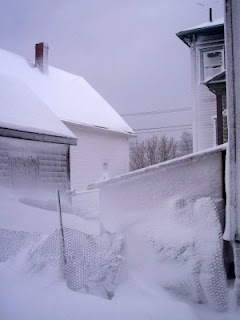 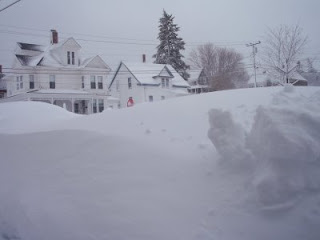 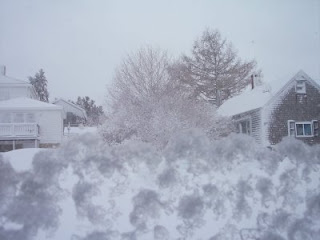 Posted by Cheri Walton at 1:00 PM No comments: 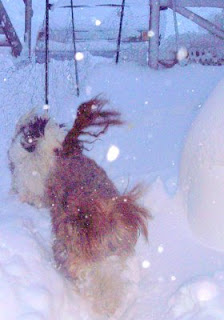 For a number of days it has been warmer and sunny. The huge piles of snow had begun to shrink. Then, we got hit hard again. I had to shovel just to let the dogs out this morning. It continued to snow all day, and each time I opened the door the snow was deeper, obliterating the paw prints from the time before. 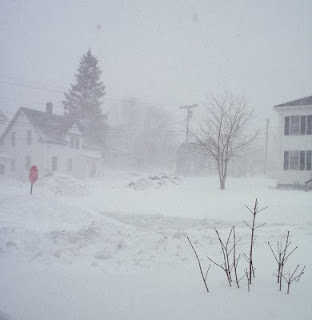 I couldn't get out to the chickens, but I had prepared yesterday for the possibility, filling up water and food dishes to last two days(I hope). No matter what happens tomorrow, I'll have to make my way out there and check on them. I feel bad for my poor girls, but there is really nothing I can do about the weather. I guess nature has prepared them for the cold, but they can't be very comfortable. We could survive, too, in the chicken house with them. But I don't think we would like it much. I bet they don't either. 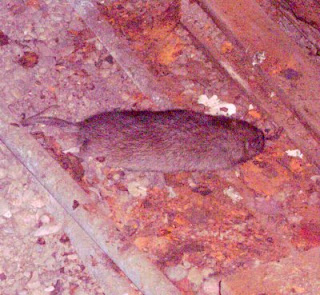 When I went into the cellar today to check the fuel, I moved a board and was greeted by this startling sight. This poor rat somehow met his maker, probably not too long ago. I hate to see anything dead, and looking at his little ears brought tears to my eyes.

During the summer, there was a dead rat outside the chicken pen, so I knew they were nearby. When I saw holes dug in the foundation by the back door, I figured they were probably going in and out of the cellar regularly. The insulation was gnawed to powder near the cellar ceiling. I tried to cover the holes by various methods, but nothing worked for long. I don't know what they were finding down there that was so appealing, but whatever it was, I hope it was worth it to this guy.

I put him rather unceremoniously in a cardboard box, wrapped in newspapers. His coffin is waiting for trash day. 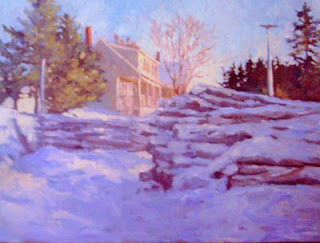 I've tried to edit this picture so it looks more like the the real thing, but for some reason I can't quite get it. This is pretty close, but slightly too red. In any case, this is my favorite painting du jour. It's one of those that I could sit and stare at for hours, one of those that I have to stop and peek at every time I walk past the studio. It's from a photo I took a few weeks ago at Ann's. The sun was just beginning to head for the horizon......not quite sunset but flooding the space between the long shadows with golden light.

I so enjoy trying to paint light. It's a translation that is so far from literal that getting the point across is quite a challenge. All a painting can do is be itself, which is not sun, or snow, or trees. Yet we make associations from it, which adds to the enjoyment of looking at it. It is the frosting on the cake, I suppose....that image that sits on that rectangle, on top of all that paint, all those marks, all those shapes. It can steal the show. Looking at a painting's subject matter is like licking the frosting off the cake. 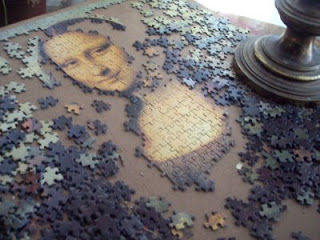 I must say that doing this for the third time is just as hard as the first.........also just as enjoyable. 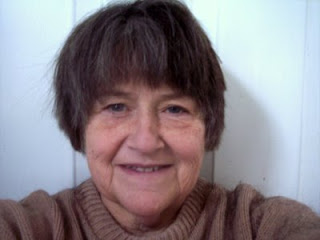 Every time I go into the bathroom I cut my hair more. It's time to move the scissors that beckon me from the shelf beside the sink. Now I have the same haircut I gave both kids year after year until they left home. I grab a clump of hair, pull it up over my head, and cut straight across. What I do in the back is anybody's guess. I may have gone over the edge to where I need to wear a hat all the time, which wouldn't be bad. I have a big wardrobe of hats, and all of them look better than my hair.

Posted by Cheri Walton at 1:31 PM No comments: 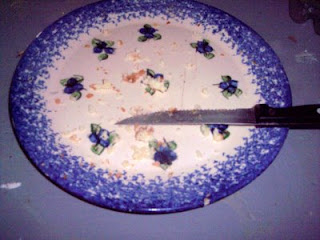 Despite my unenthusiastic description of the cake I made yesterday, the dogs and I (mostly I) managed to polish it off in record time........without strawberries or whipped cream. 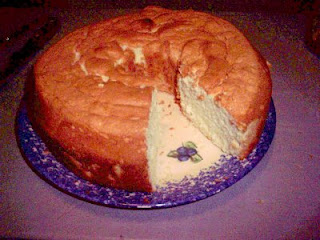 In my struggle to use up eggs, I made this cake, which takes twelve of them. I have never had an Angel Food Cake that wasn't made from a mix (it was our standard birthday cake when I was growing up), and I never really liked it. I thought perhaps the home-made version would be be an improvement. It was a lot of work, separating all those eggs, sifting all that sugar and flour, beating and folding the batter gently so as to not deflate the eggs. It is a pretty thing and I feel accomplished as a cook having done it. It is probably perceptibly better tasting than the mixes of my youth. Nevertheless, it is still Angel Food Cake. I think if I get some heavy cream and strawberries to go with it, it will be fine.

We had yet another snowstorm yesterday and last night. I had to drive to Perry in it to get chicken food, but I got back before the roads were too slippery. At the feed store I checked out the various feeders they had for chickens and ended up buying a big metal thing that hangs from the ceiling. I have tried everything I could think of to keep the chickens from kicking sawdust and pooping in their food. Nothing has worked, plus nothing was big enough to last them 24 hours. This afternoon after I shoveled a rudimentary path I installed the new feeder and cleaned out the house. It has been bothering me that the place was so dirty, but I kept putting off doing anything about it because of the weather and the accessability problem.......I can squeeze through the fence, but I can't get a bale of wood shavings in there. Using my trusty hoe, I dug out the congealed sawdust and poop. The girls were curious about what I was doing, and slightly un-nerved, but not enough to go outside. They watched from their roosts, talking about it from time to time. After I had thrown enough old sawdust, etc. out onto the ground, one of the Rhode Island Reds (I regret to say that I couldn't tell which one it was) ventured outside. She flew up onto the bulkhead and then had a harrowing and slippery ride down the slanting door. It didn't seem to bother her much, but she did decide to go back inside. I filled a trash bag full of new sawdust from the bale I had in the car and put down new bedding.

The chicken house is really much too small for six chickens. I thought I was going to have three chickens, and the house would be fine for that, but six is too many for the space. In the spring I think I will try to figure out how to expand it. They have begun to peck at one another, and a couple of them have small raw places on their backs. I am more than distressed by this, but don't know what to do about it. I can't blame them for getting short-tempered. They are confined in such a small area that they probably can barely stand to look at each other.

My plan is to open their door during the day so they can go out if they want to. I stopped doing that earlier because it was so cold and I thought they would be uncomfortable. Now I think that even if they don't go out the open door will give them an illusion of more room...........with the added bonus of fresh air. I read that chickens can stand cold temperatures without problems.

Posted by Cheri Walton at 9:17 PM No comments: