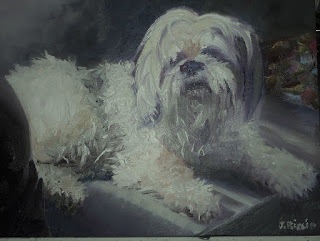 Jim painted this portrait of Patrick just a few days ago.  Now it turns out to be his memorial. For the last several days he seemed to be winding down.  He was increasingly lethargic, stopped eating.  Though I knew he was dying, I couldn't totally accept it.  For days I watched him deteriorate.  He didn't seem to be suffering, and it was my vague intent to let him die on his own.  At the same time I didn't rule out a miracle until yesterday.  I finally decided it was unfair to us both to let him go on.  I took him to the vet and had him euthanized.

I wonder how many more times I can endure the loss of a beloved animal....how many times I can tell myself that the joy of having them is worth the pain.  I'm probably not done yet.  For one thing, I still have Willy.  He's still reasonably young.  Though I love him, he won't fill the void left by Patrick.  I will have to decide if I will go through the rest of my life without the intense love I felt for Lytton and Patrick in order to avoid the pain of losing them.  Probably I won't.