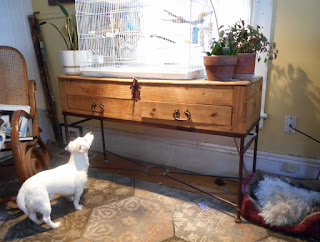 Willy's unhealthy relationship with the birds forced me to make some changes in their habitat.  He is obsessed with them, and at times jumps up to get a better view.  He jumped off the bed every two or three minutes last night to run downstairs and check them out.  Patrick and I couldn't sleep, so I had to close Willy in the bedroom with us.  He accepted his fate, but as soon as we got up this morning he was off down the stairs as fast as his legs would carry him.

The table I originally put the cage on looked a little unstable and I worried that he would knock it over with his exuberance.  This "thing" (I don't know what to call it) that I had in the hall is a little higher and much heavier.  I knew that Willy wouldn't be able to budge it no matter what he did.  So I swapped the  two.  It's a great setup, with my old incubator light from the baby chicken days hanging from a hook in the ceiling over the table for heat.  I was worried that Joshua and Jenny would be cold, not to mention the projected bill for electricity if I continued with the heater.  It creates a nice environment, too, with the plants.

It's obvious that Patrick is unimpressed, sleeping in his bed to the right of the table.
Posted by Cheri Walton at 3:20 PM 3 comments:

New Additions to the Family 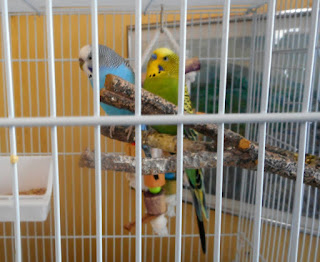 Not long after I posted that I thought about getting birds, my friend Lindy contacted me. It's a perfect example of "ask and it shall be given."  She had two parakeets she wanted to re-home. Before I knew it, I had taken them in.  Right now I am enjoying their little sounds and watching them eat.  Willy took such a keen interest in them that I put a gate in front of the table where the cage is.  I'm expecting him to get used to them and consider them part of the family,
at which time I will remove it.

I've placed the cage in a corner of the dining/piano/computer room where they will get plenty of company for part of the day.  They are surrounded by heaters, so I'm hoping the temperature of the rest of the house won't  effect them adversely.  So far they seem content enough.

I like their little sounds in the air, signs of life.
Posted by Cheri Walton at 1:37 PM No comments:

Although it has snowed a little, there has not really been enough to make it seem like winter until now.  This morning the boys and I went for our first snowy walk of the season.  It wasn't really particularly cold, and we all had a good time  walking (me) and romping (Patrick and Willy) in the new snow.  It seems appropriate that we should have some snow at this point, so despite the cold and the inconvenience it seems that all is now right with the world.

Posted by Cheri Walton at 10:41 PM No comments:

Birds at the Breakfast Table 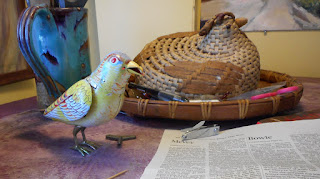 This is the company I keep while having my breakfast coffee.  The bird on the left is a Christmas present.  If you wind it up it chirps and flaps its wings.  I am quite enamored of the thing and set it in motion with its little key quite often.  The chicken basket I bought years ago and it holds things I might want while sitting at the table....pens, eye drops, nail clippers, glue, etc.

I am contemplating getting some real birds, but so far have done little to make that a reality.  I feel the need to care for more animals, but don't want any creatures who will have any affection for me.  I love the idea of providing the comforts of life to those who are basically unaware of my role.  It gives me such pleasure to know that those in my care take it completely for granted, that the concept of need or want does not exist for them.  Acknowledgment or even awareness of my role in their lives implies dependence and gratitude, which in turn makes my contribution selfishly prideful.  I want them to expect and receive whatever they need without having to be grateful.

That idea doesn't apply to dogs.   The responsibility of being loved is almost too much to bear.
Posted by Cheri Walton at 12:02 PM 2 comments: 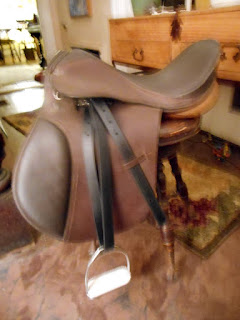 As an adult I felt more refined.....my cowgirl days were over.  I took years of lessons from two different experts in dressage.  My horse BJ  never really learned the fancy steps and moves, but we played at it.

I can't wait to put this 71 year old body to the test.
Posted by Cheri Walton at 5:52 PM No comments:

Kendall and Charlie and Me 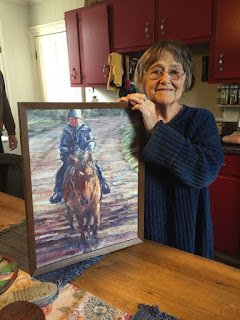 I almost forgot to post this picture of me with the painting Pierre commissioned me to paint of Kendall and Charlie.
Posted by Cheri Walton at 7:36 PM No comments: 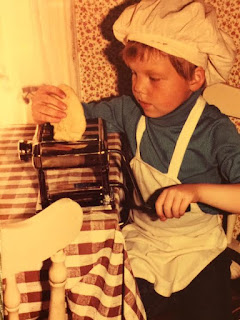 When he was four, my son Jesse was diagnosed with Legg-Perthes Disease.  The treatment was to immobilize his hip joint until the top of his femur died and then regenerated.  This took about two years, during which time he was in a cast that held both legs at an angle to the joint to allow proper regrowth.  Even though he had crutches, the only way he could get around was to put one crutch in front of him and the other behind.  Then he could swing the bottom half of his body between them.  Most of the time he simply dragged himself across the floor.

During that time, as one might imagine, he and I were constant companions.  I  carried him everywhere (including up and down the 19 stairs to the second floor of our house).  One of the things we did together was cook.  This picture shows him rolling out home made pasta.  My mother made the chef's hat and apron for him as a Christmas present. We played board games, read stories, drew pictures, watched "Sesame Street" and went shopping.  We were frequent visitors to the mall, roaming around to pass the time.  He rode in a second hand wheelchair with the arms removed to accommodate his outstretched legs.

Jesse's handicap didn't stop us from living life pretty normally.  We even took a plane to Florida and went to Disney World.  He enjoyed the extra attention he got everywhere we went.  To this day he claims to remember nothing about the experience except that it was "the only way to see Disney World."  A child in a wheelchair is ushered to the front of every line, hugged by every Disney character, given special souvenirs.

In many ways that was a wonderful time of life for me.  Our world was small and focused, insulated in a way.  Our priorities were clear.


Posted by Cheri Walton at 7:25 PM No comments: