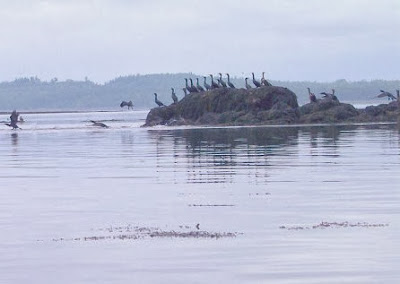 There are a few things my ruined shoulders have taken away that are very painful.  One is kayaking.  I came across this photo while looking through some older pictures stored in on Picasa.  Of all the times Tony and I went out on the water, this one at Deep Cove is my favorite.  The day was very overcast, but the water was smooth as glass.  It was so still that we paddled much farther out than on other, sunny days.  The cove is sparsely peppered with small islands of rock and seaweed.  On this day, they were covered with birds.  I always brought my camera when we kayaked, so I was able to take pictures......my web album has 100 shots of the trip.  There are an equal number of the rocky cliffs surrounding the cove.  We were able to paddle right up to the enormous walls of rock, so close that we bounced off the sides as we floated with the waves.

I often thought that kayaking was the greatest experience of my life.

I suppose there are several experiences that at the time seemed overwhelmingly wonderful.  I am lucky to have had them, and lucky now to remember them.  Some are just moments that flash into my mind at odd moments.  I knew at the time to press them there like flowers in a book.  One was riding the horse I leased in Calais, Cheyenne.  I was riding alone in the fall woods, surrounded by yellow leaves.  I looked down at Cheyenne's neck, and then around me.  "This is it," I told myself.  "A perfect moment.  Notice it and remember it."  And I did.   There are many, many more glimpses into the past that live vividly in my brain, ready to be called back in remarkable detail.  I relive them from behind my own eyes in seconds or minutes that block the present so completely it does not exist.  They are always intensely happy moments.

My painful memories involve animals for the most part, general and specific thoughts that are almost unbearable.  They are much more unpredictable.  I never know when they will appear or how long they will last.  They are very close to the surface and attack without warning.

Well, I suppose that is the human condition.  Our minds have an imperfect filtering system.

What I saw on the way to Dinner 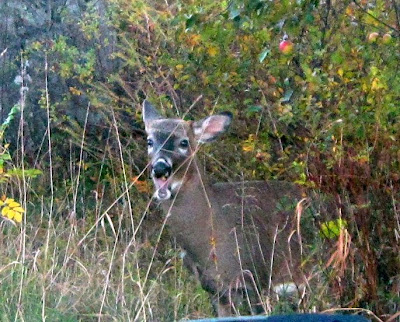 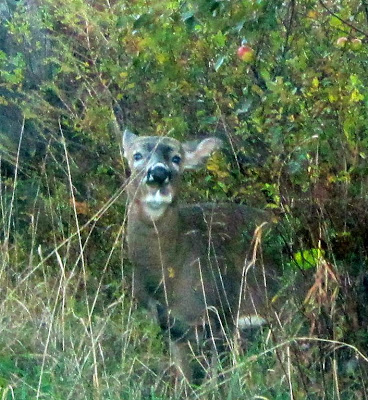 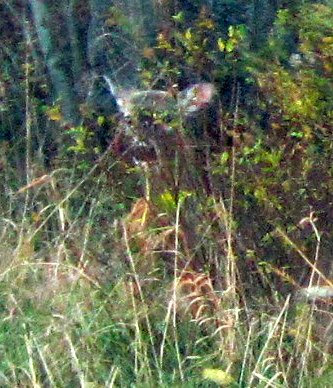 Last night on the way to have dinner with Pierre and Kendall I saw several deer eating by the side of Cemetery Road.  Some of them ran off as I approached, but many did not.  This one seemed pretty unconcerned as I grabbed my camera and crept closer.  She kept munching on whatever she was eating, keeping a watchful eye out.

I love seeing the deer, but my enjoyment is tempered by the knowledge of their difficult little lives, the suffering they have to endure.  Their lives are in danger so much of the time.  Even here, where hunting them with guns is prohibited, bow and arrow hunting is allowed.  Many are hit by cars, which to my mind does not need to happen.  And if they survive those threats, their lives must be hell in the cold winter, with many starving or freezing to death.

This is the way of life on planet earth.  I can't bear to think of it.

This is the beginning of a new 4th of July painting.  I hadn't planned on doing it today, but I went into the studio looking for something else (I've already forgotten what) and came across this oblong piece of plywood that seemed to be begging for a parade painting.  I thought I would just sketch it on, then put on just a few colors to seal the wood.  This is the stage that I love the most.  I wish I could leave it right there, but I can't.  I am compelled to keep it going until I have made it look like my usual way of painting.  It's not that I don't like my usual finished product, but I find this much more interesting.  I like seeing the process.  I also like seeing how little it takes to make a likeness of someone.  These people have no faces yet, but they still are individuals.  You can already see the relationships between them.  You know something of their personalities, and you certainly know what they are doing.  I photographed my other parade painting at this stage, too, for the same reason.  It has suffered a decline in my affections ever since. 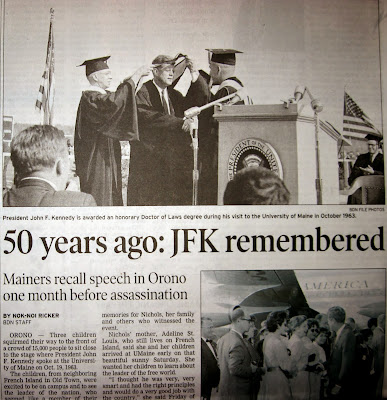 How in the world can it be 50 years ago since I, a freshman in college, attended this event.  I remember it so clearly it could have happened last week.  What I do not remember is that it was so close to the day Kennedy was assassinated.  I was able to shake hands with him that day, and two other times when he was still only a candidate.  It was a thrill each time.  He appeared just as I was evolving from a teenager into a young adult, barely over my terrible crush on Elvis Presley.  He was a transition figure in my life, caught between my love for a teen-age idol and the discovery that the world is big, and unpredictable, and flawed.

As does anyone who lived through that assassination, I remember exactly where I was when I got the news. Jeannette and I were sitting at the kitchen table at lunch.  The phone rang and Mike went to answer it.  He called to us that his friend Jack (now deceased) was telling him the president had been shot. Always ready to poo-poo anything that Mike said, I remarked that if it had really happened it would surely be on TV.  The words were barely out of my mouth when the screen on the black and white TV that sat on top of the refrigerator flickered.  Walter Cronkite appeared as the words "we interrupt this program ......" filled the air like a black cloud.  That black cloud consumed every moment of our lives for the next several days.

I was particularly absorbed by every detail of the assassination.  I hauled the big recliner up to the living room TV and barely moved away from it for days.  The rest of the family came and went, but I was mesmerized.  I watched Lee Harvey killed in front of my eyes, and then repeated so many times I can still see it now......Jack Ruby stepping out in front of the camera, the popping sound of the gun, the chaos.  I saw Jackie Kennedy's black horse follow the hearse, empty boots in the stirrups to symbolize a fallen warrior.  I watched John-John's salute, the crowd in the Capitol rotunda filing past the casket, Jackie kneeling there with the children.  Later, I saw the eternal flame lit at the grave site........not so eternal that the wind didn't blow it out a short time later.

After days and days in front of the TV I finally turned away.  There my memory fades.  How did I go back to the business of my life?  I don't remember.  Tucked away in a cardboard box in the spare bedroom upstairs is the original copy of the Bangor Daily News on the day after the assassination, along with a campaign poster, and the band from a plastic "straw" hat I wore that said Kennedy for President.  There are numerous magazines dedicated to the assassination, and then the endless special editions about the Kennedy family.  I hear people say that his death ended an innocent era, and I believe that it did.  Certainly it did for me.  After the optimism and upbeat mood of the American people that characterized his short presidency the country seemed to dissolve into riots, demonstrations, protests, and more assassinations.  Americans became nervous, angry, filled with feelings of a betrayal they couldn't quite define.

Then, I may be describing only my own transformation, my own disappointment that my idea of an optimistic, honest America was, and had been, a lie I told myself.

Posted by Cheri Walton at 8:02 PM No comments: 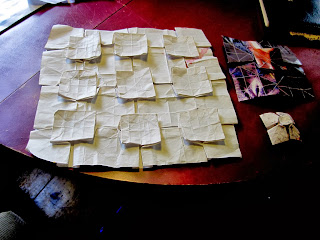 I have been spending an inordinate amount of time trying various types of origami.  I have been fascinated with folded paper ever since my first project in Sculptue I at U of M.  Over the years it has surfaced several times,but I think this is the most obsessed I have ever been.  This kind of paper folding is called tesselations, which results in a flat design.  There's no way to describe how I have labored over this, the very first project in the book I bought.  Hours and hours pass as I puzzle over the instructions.  My understanding of how this design comes to be is still very tenuous.  Every repeat of this square was a struggle.  Even now I am sure that the next one will be only slightly easier than the last.  Each one has been manipulated so many times that the once sturdy typing paper I used is as soft as a tissue.

Early on, when I was still trying to do just one square, I tried different sizes and paper.  One is a photograph and the other two are from a piece of painted watercolor paper.  As I work, I entertain various ideas of how to use other media with this to make a new kind of artwork.  So far my ideas are vague, but I know whatever I do with it (if I do anything) will involve at least some kind of representational subject matter.  I have never been very satisfied with complete abstraction............always feeling the need to explain what I have done with realistic images.  I love abstraction, but I can't seem to find the process satisfying.  It has to be that I don't understand it well enough.  I guess I am too grounded, too possessive of my own work.  I am not comfortable with others iinhaling my work and making it theirs. 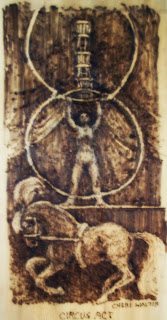 My attention has been very scattered lately and I have several things going at once.  Two of them are my latest wood burning and the sweater I'm knitting.  I saw this sweater in a catalog with a very hard price tag.  I liked it so much that I decided I would copy the picture.  This is the back, which I have finished in record time.  A pattern like this keeps me interested and engrossed, so I tend to stay with it for longer periods of time.  The worst is over now, since the fronts and back are much smaller.  I can only hope that my interest in the finished product doesn't wane.  I so often quit once I realize I have conquered the task and could finish it if I put in the effort.  What made me so process oriented I'll never know, but it certainly hinders my ability to finish things.

The image is one I used years ago as part of an illustration of an e.e. cummings poem that intrigued me at the time.  It still does.  "I am a man, I am an artist, I am a failure."  He compares being an artist with being a circus performer. 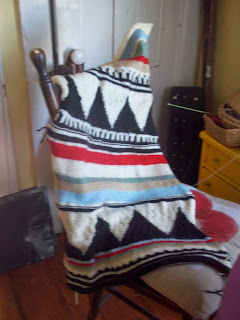 Posted by Cheri Walton at 4:01 PM No comments: