I found Petunia under the coop last night, still alive but obviously dying. I isolated her so she could do it in peace, which she did. I don't know, of course, but maybe she got an infection from her wounds that took all this time to be fatal. I only hope it wasn't anything the others will get.

I haven't had the wherewithall to do anything with her body yet, but I will probably just put her in a bag in the trash as I have the others. It is an awful thought if I think of it being Petunia, but the body of any dead thing, including a human, is nothing I care about. It's like disposing of a clam shell after you remove the clam......It is irreverent, I suppose, but somehow it seems that leaving a body behind when you die is sort of like taking off your coat.
Posted by Cheri Walton at 4:45 PM 3 comments: 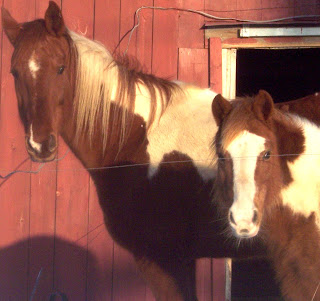 I thought I would never ride a horse again. It made me feel old and sad that something that was once so important to me was gone forever. Today, though, I got another chance. It was as if I had been granted the one wish that I thought was going to elude me. I've been lucky in that almost everything I ever wanted has come to pass, but I had resigned myself to the fact that I would never ride by the ocean.

Well, I rode Touchy by the ocean, and like most of my dreams, it was as wonderful as I had always imagined it. It was a cool but sunny day, with the trees just beginning to turn color. The water was sparkling blue, as it was meant to be. I felt free and unafraid, as I always knew I would. Ann's horse is kind and obedient, but energetic and responsive. She appeared to be enjoying herself, too. We didn't know each other, so experienced the event in our own separate but companionable way. She had no idea what an important part she was playing in my life, and was therefore unencumbered by any responsibility for my pleasure. This freed me as well to immerse myself in my own experience. It was just perfect.

Posted by Cheri Walton at 8:03 PM No comments:

I believe that jealousy is what I feel as I lose my place in the community. I have thought that it wasn't important to me to be known as an artist, yet something bothers me as I see others moving in where I once was. Hmmmm......
Posted by Cheri Walton at 7:22 PM 3 comments: 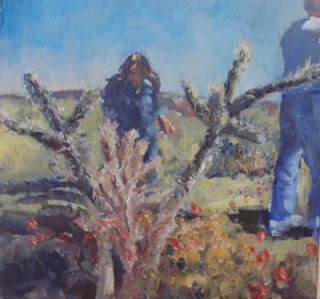 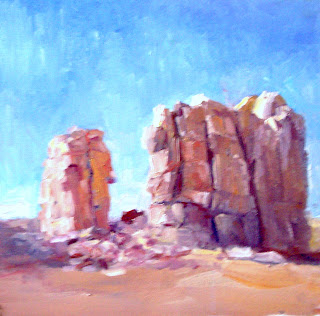 I've started a series of paintings from photos I took when I was in New Mexico. It's to entertain myself for than anything else, and I'm enjoying doing it. These are the first two. I have another almost done.....of the balloons at the fiesta. 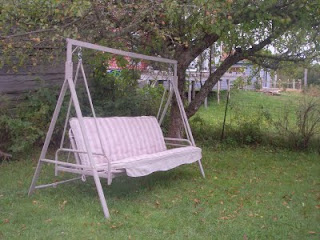 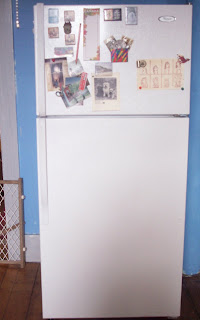 These two things came from Mike's new house to mine. This is all that has happened since my last post.

Posted by Cheri Walton at 4:03 PM No comments: 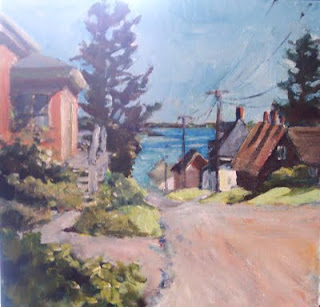 This year I thought to take a picture of the painting I did for Paint Eastport Day. This is just up the street from my house.........a scene I look at every day. Usually I have gone downtown to paint, but the town is full of people here for the Pirate Festival (a stupid event if ever there was one). I can't imagine who set this up to be the same week-end as the Salmon Festival and Paint Eastport Day, but I really think it detracts from the tradition. Whatever, I set myself up out of the crowd and spent the day pretty much alone with my painting. I'm pleased with it in the end, but for awhile I wondered if it would be viable. I used acrylics so it would be dry for the auction tonight, not thinking about the fact that I haven't used them for quite awhile. It has been a hot day, too, making the paint dry even faster than it usually does. Once I considered this an advantage, but I'm out of practise and had a hard time for awhile.

It seems strange to participate in Paint Eastport Day without having done any of the preparation. I am an outsider this year, and I must say I enjoyed the lack of furror that has always been the main characteristic of the day. Here I sit, having turned my painting into the art center, with nothing to do until the auction later this afternoon. Actually I don't really have to go to that either, but I believe I will in order to see how it goes, if my painting sells, how big the crowd is, and to check out the other work. I am preparing to rejoin the gallery after this season, but I have to say I haven't missed it. It has been enlightening to be myself. I thought I might feel afloat and detached from the art community. Instead I have found an unexpected sense of individuality that feels powerful to me. 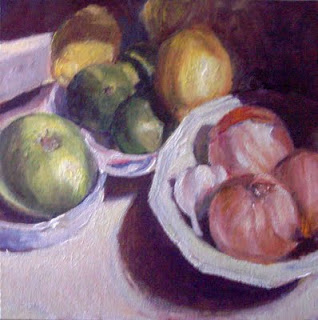 I can't say what I've been doing, though I must have been busy doing something since I haven't written. My farm on Farmville goes unattended, my virtual pet, Rabitha, has been neglected, my facebook games of lexulous sit stagnant.

When Carrie and Gabe were here visiting we had a wonderful time. They were able to stay a little longer than usual so it didn't seem so rushed. Gabe helped me with some jobs I have been wanting to get done for a long time, but am too short to accomplish alone. The light that was hanging from the ceiling in the middle of the dining room has finally taken its rightful place over the table. The hall light works again after Gabe removed the neck of the old bulb that had broken off. Carrie jogged in the mornings, and we went to see Mike's place. We shopped, and we cooked and ate (always a a favorite activity). I always feel so grateful and happy that my kids have grown up to be such nice people.

I did get the energy to paint this small still life from a photo that Thom took. I was interested in the lighting, of course, and the roundness of the fruit. There's nothing prettier than nicely lit fruit.

Posted by Cheri Walton at 5:44 PM No comments: