I Couldn't Stay Away 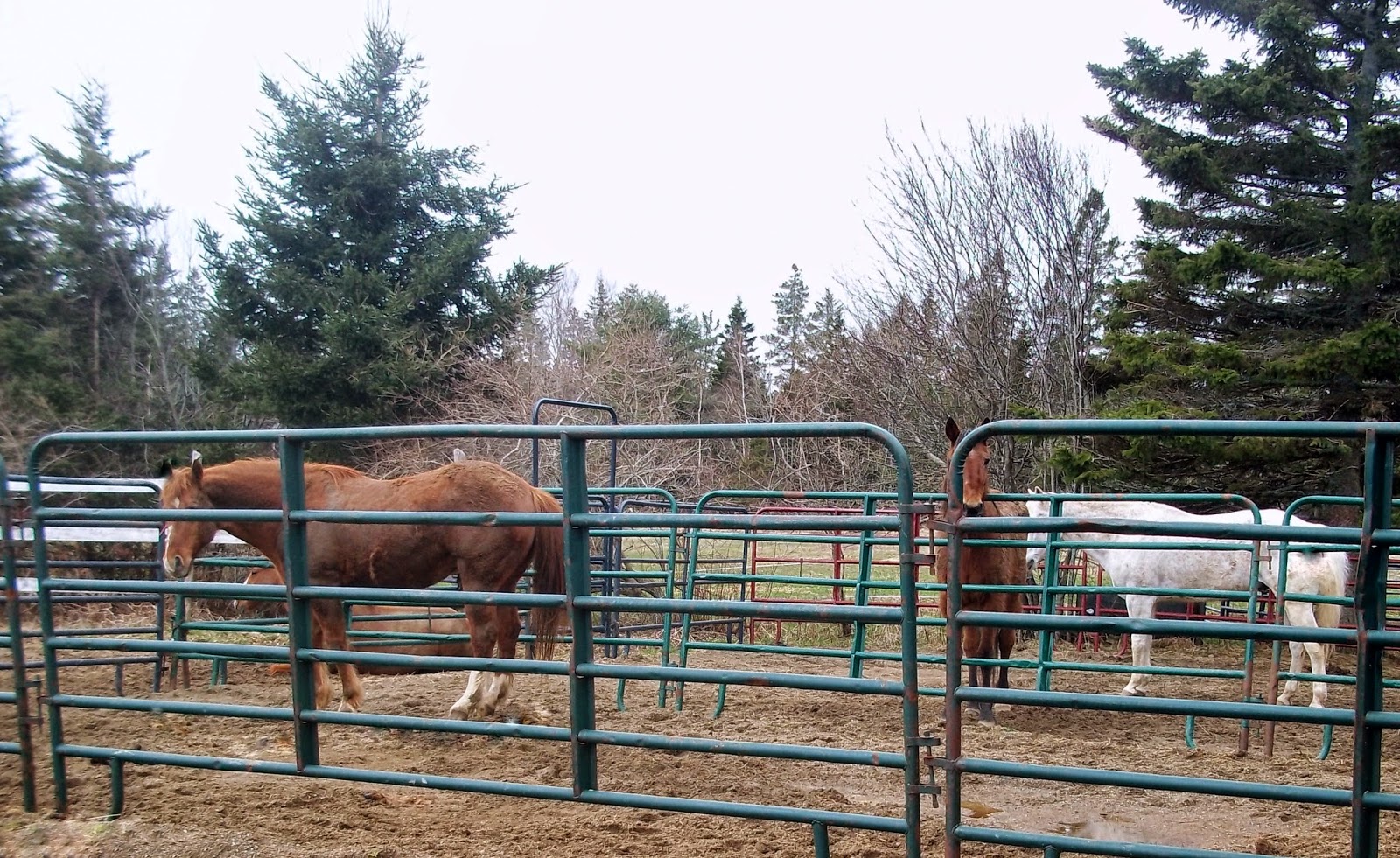 Well, I had to go back to the farm.  I spoke with Andrea about it and she said she would like to have somebody who could feed lunch.  I jumped at the chance for this low impact job and began yesterday.  For awhile I feared I wasn't up to it because it involved hanging hay nets.  After one day I knew my shoulders wouldn't be able to take that kind of activity.  When I told Andrea, she said that hay nets were a pain in the butt anyway, so to just throw the hay on the ground.  Today I loaded up the wheelbarrow and put down two flakes of hay for each horse.

This proved to be entirely manageable and I am one happy woman.  Having this chore to do every day is a great boost to my self image.  I have not been able to adjust to old age yet, despite a half-hearted attempt to do so.  I suppose at some point I will have to admit to myself that my age and physical condition don't allow the same level of physical prowess I have always enjoyed and depended upon.  It was my hope that my mind would keep up with my body on the downhill slope, but that has not been the case so far.  Nevertheless, I am comforted by this small step backwards.
Posted by Cheri Walton at 2:44 PM 3 comments: 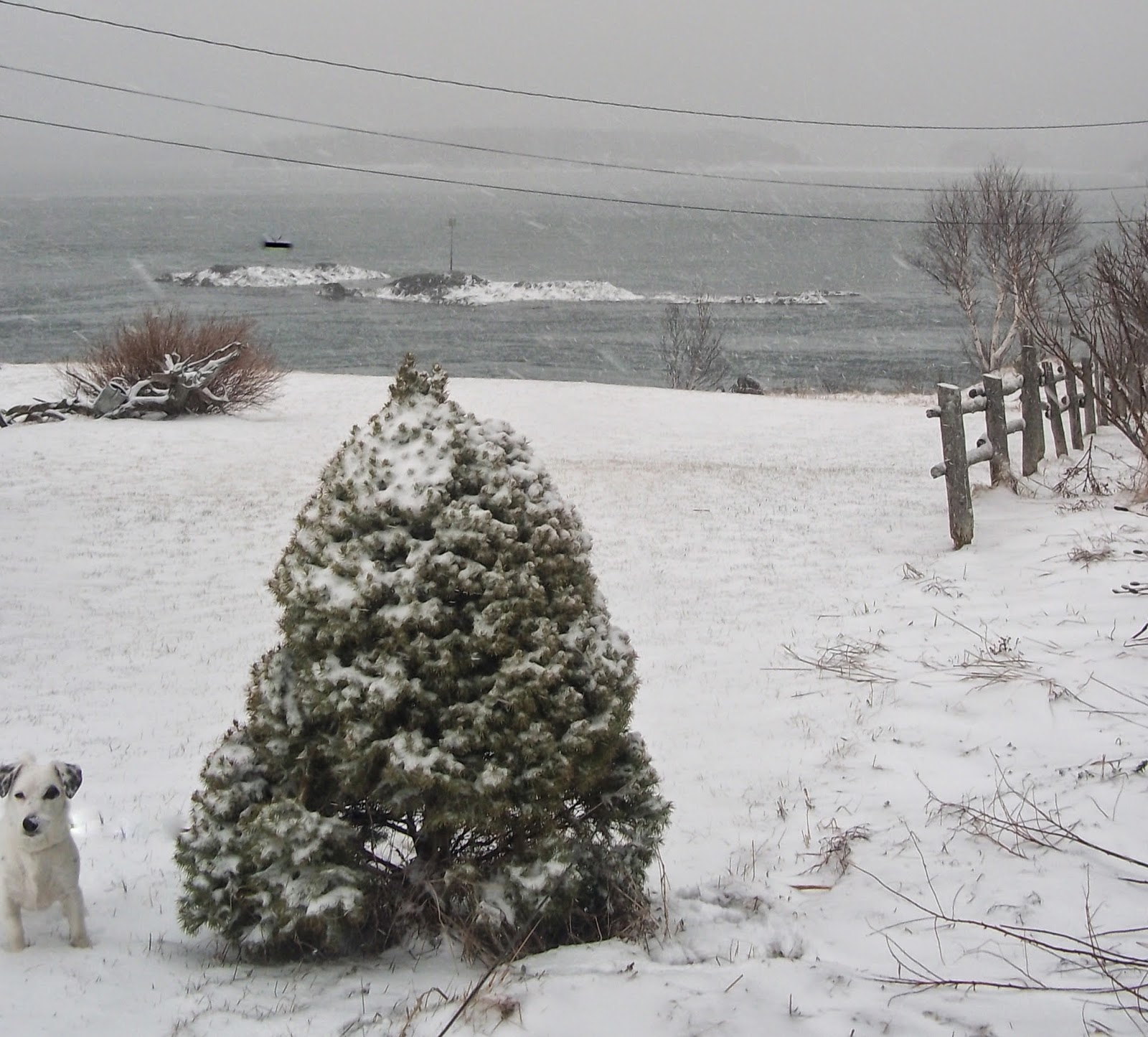 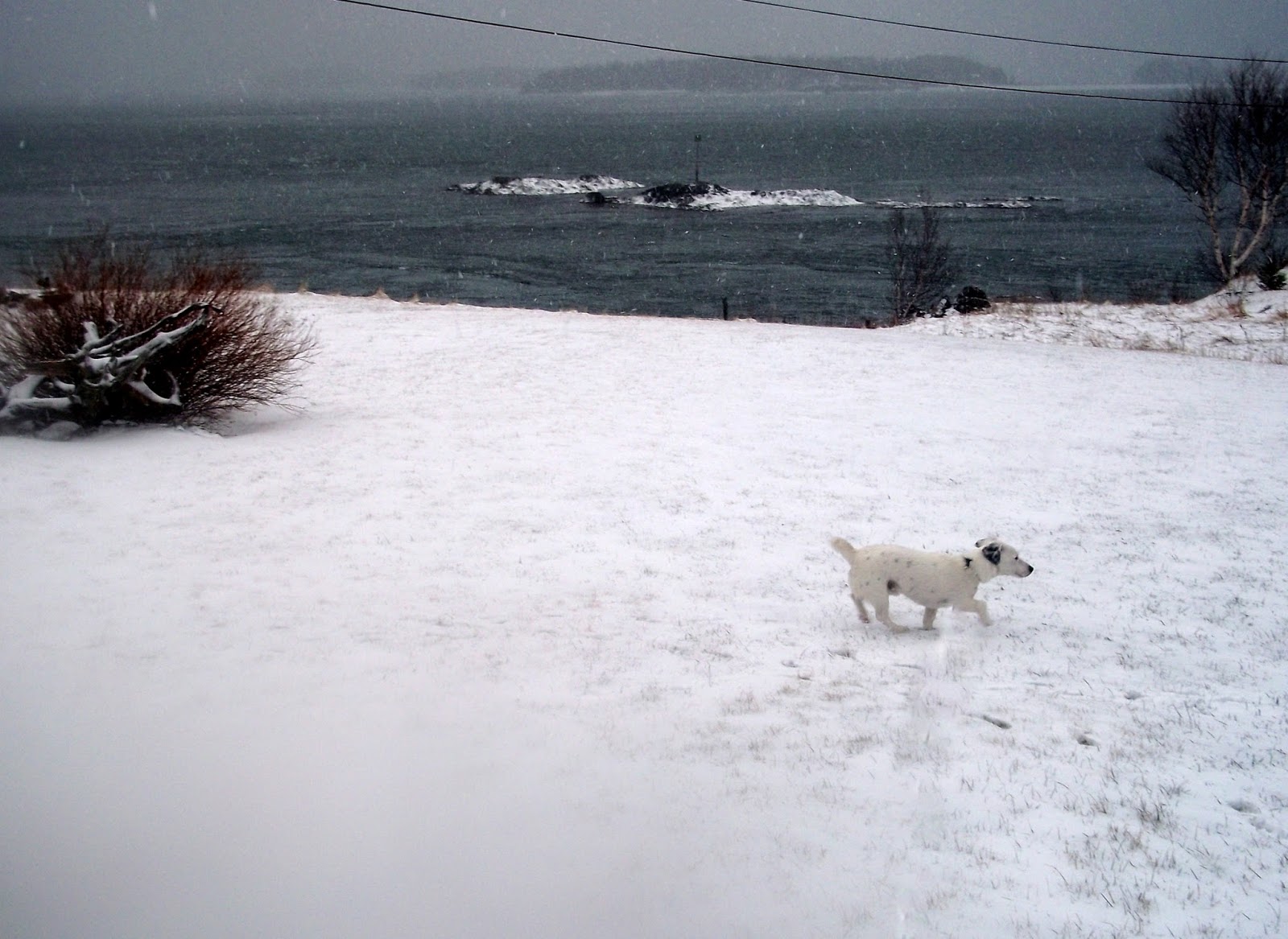 Got up this morning, and what did I see?
Posted by Cheri Walton at 12:26 PM 2 comments: 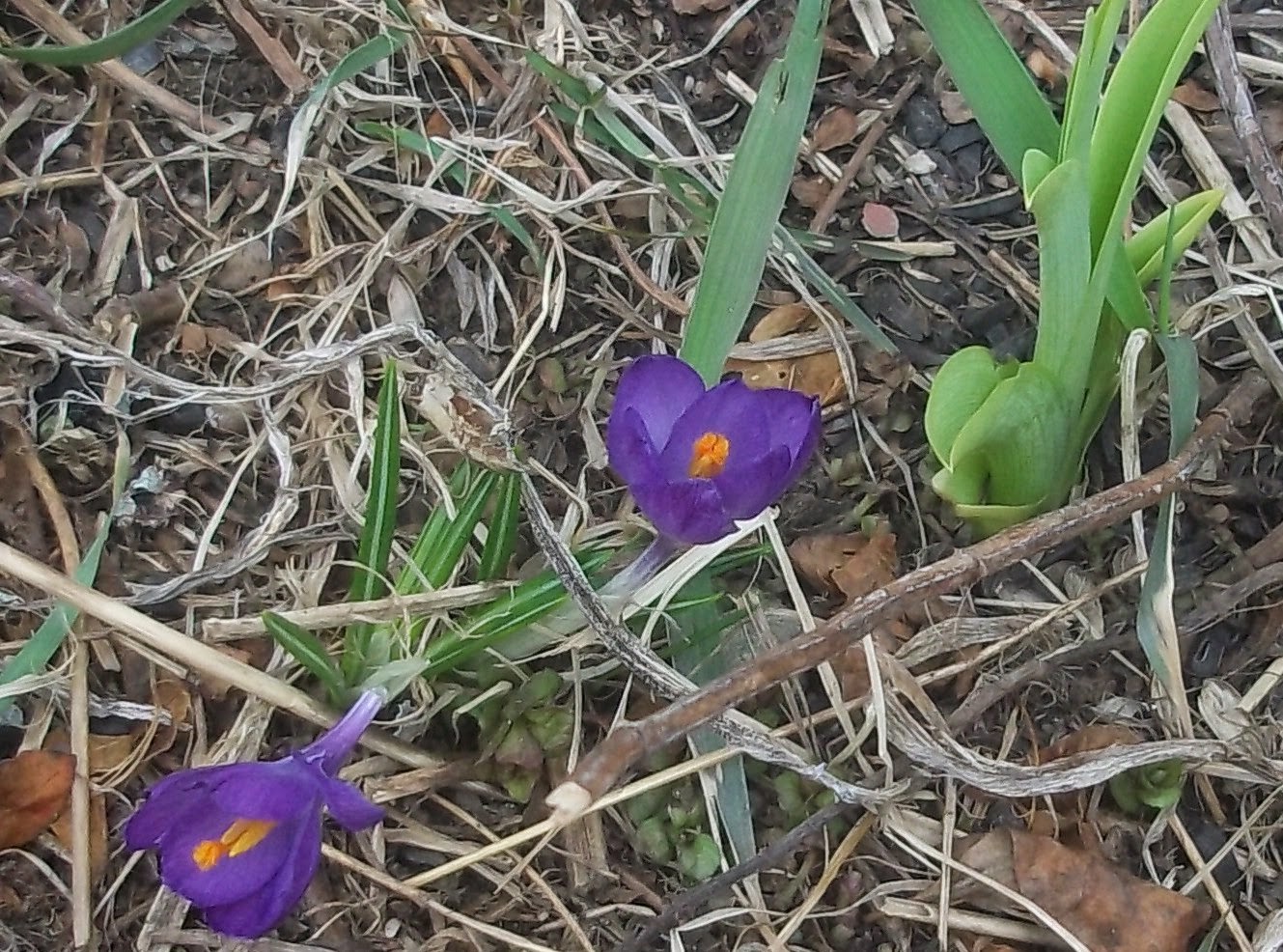 Finally almost all of the snow has melted.  I saw these little blossoms this morning under the bay window, along with the day lilies, which poked their heads out much earlier.  It was warm enough for me to go out and revamp the chicken pen.  Every year I try to make a better place for them.  No matter what I do, though, it still looks like a yard full of junk.....well it IS a pile of junk.  The fence itself, made from scraps of wood I picked up around the yard and rusty chicken wire, is bad enough.  The addition last fall of the junk Marshall left after re-doing the bulkhead, added to the mess.  It seems that no matter how I try,  there is no way to makes scraps of used lumber look good.  I guess this is an example of the old saying, "You can't make a silk purse out of a sow's ear."  Nevertheless, I keep trying.  Just getting rid of the leftover scraps and broken boards would help tremendously, but I have no way of trucking it off to the dump.......paying to have it removed is, of course, out of the question.

Ah!  I just had a thought.  There is probably room enough in the cellar to stash this stuff.  I hate to fill it up with junk, but better there than in the yard.  That will be my next project.
Posted by Cheri Walton at 12:24 PM No comments:

The Chickens Take a Walk 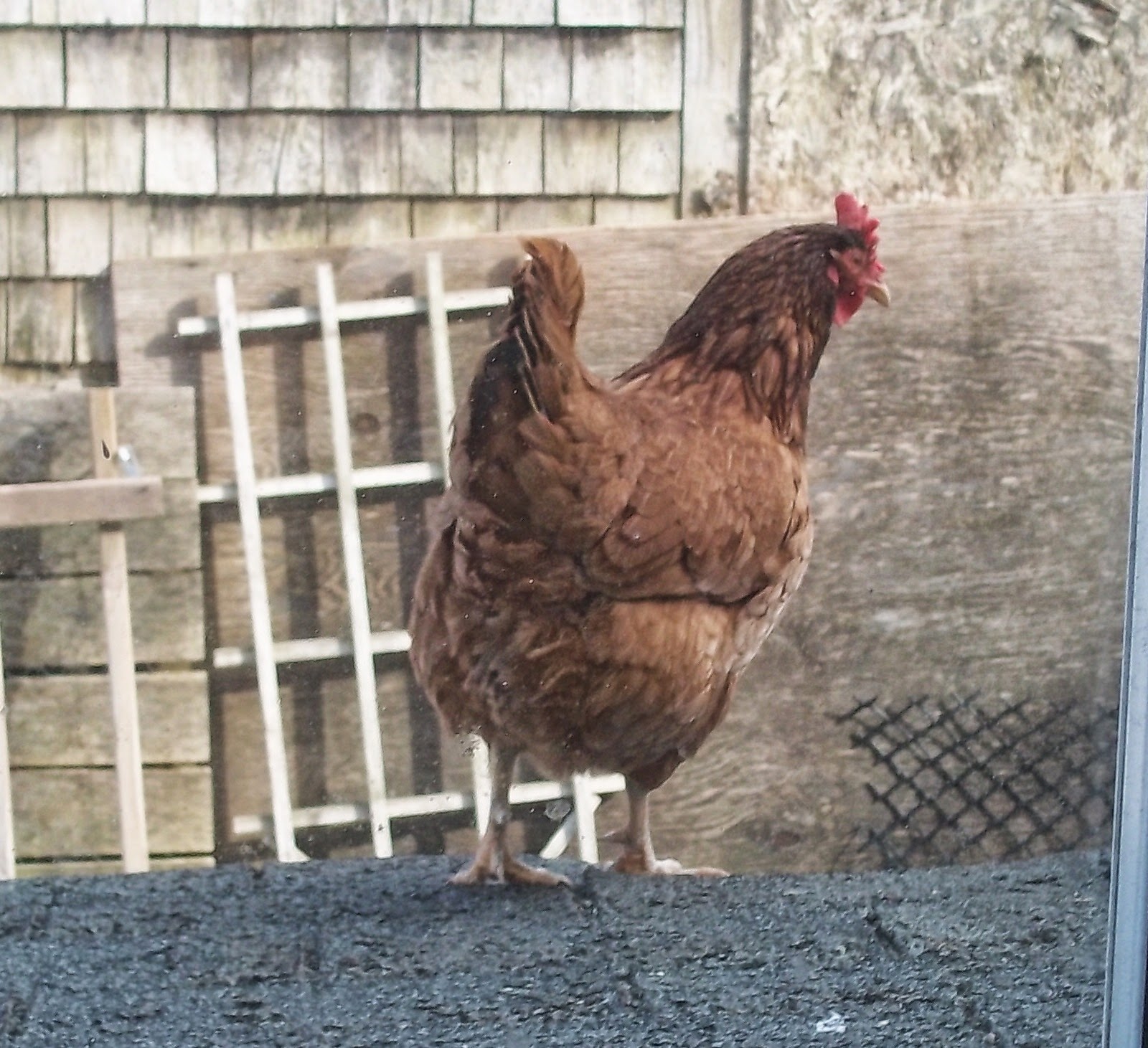 Two nights ago when I went out to close the chickens in their coop there were only three of them there.  I looked all over the yard, under the coop..everywhere I could think of, to no avail.  Panic set in quickly.  It was getting dark, and I thought the girls would be nearby if they had flown out of the pen.  I got my flashlight and began to look under decks and porches.  I walked an ever widening search area and couldn't find them.  I began to really panic, thinking of all my previous experiences with missing chickens......none of which ended well.  After checking and re-checking every place I had already been, it got too dark to see anything.  I came in the house, then went back out to look again.  This time I was looking through tears as I imagined predators of various kinds tearing my little girls to shreds.  Finally I gave up.  It was a very sad evening.  The dogs disappeared whenever I began crying again......they are certainly fair-weather friends and desert me whenever I am upset.

So, I went to bed and dreamed of various terrible ways a chicken could be killed.  In the morning I was afraid to let the remaining chickens out before I had made a thorough check of the fence, so I was sitting at the table contemplating what the future held for me in terms of chickens. There was a knock at the door. I opened it to a woman I did not recognize. She told me she had three "roosters" in her yard, and couldn't think of anyone else they might belong to.  Of course I was thrilled and followed her down the street to her house.  Bonnie, Dottie, and Polka were pecking contentedly on her back lawn.

If you know chickens, you won't be surprised that it took us over an hour to capture them all.  I drove my car to her house and tossed them in the back seat one by one as we caught them.  The fact that they survived the night seems like a miracle, but I guess most predators are still hibernating.....or at least not hungry.  As a thank you, I delivered a dozen eggs to their savior.
Posted by Cheri Walton at 5:28 PM No comments: