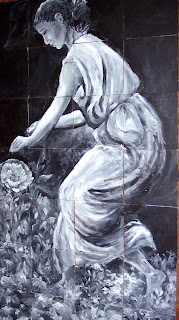 Yesterday David and I took the acrylics 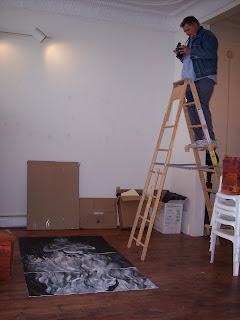 I've done for the Machias show down to the gallery. The floor is big enough to assemble the squares and see the entire paintings at once. The middle picture is David taking a picture of Demeter and the fire. At the top is Persephone getting ready to pick the flower, and the bottom is, of course, the herd of horses. I didn't get a picture of Demeter because I couldn't seem to get it in the frame. This one of Persephone is skewed, but still looks pretty much like the real thing. The horses painting is missing both ends, but not by much.

Today I picked out the Epping Road pastels that I plan to use in that show. I want to arrange twelve of them from summer to fall to winter to spring. This is meant to show the power of Demeter the Goddess of agriculture, of death and rebirth. The concept came after the drawings, which were actually nothing but representations of the blueberry fields in all seasons. With the show on my mind for so long, the pastels slid into the myth without much help from my consciousness and gave me what I needed to flesh out my contribution without extra work.

So, things are coming down to the wire. Details not involving the actual creation of the work are pretty much all that remain. The opening was postponed, but I believe I could have been ready for the orginal date without tearing my hair out. This is probably the first time in my life I have worked on a long-term goal steadily but unhurriedly and got it done on time. Of course I shouldn't speak too soon, and already I am contemplating extra work to fill in the gap. I want to make written explanations of what is gong on in the pictures. It's the same approach I always take when I am about to be on time. I misjudge how long it is going to take to do "one more thing" and end up scrambling to arrive a few minutes late.

Letter to the Editor

This is a copy of the letter I sent to the editor of the newspaper. It was in response to oneof several articles dealing with the question of bear trapping. Maine is the only state to still allow it. Tradition and Maine heritage are their constant hue and cry. It enrages me.

It is more than irritating to have so-called sportsmen keep referring to animal rights activists as "extremists" as if that were a dirty word. It is "extremely" cruel to kill animals, especially for sport. The basic argument seems to be that we have always done it. So what? Hundreds of thousands of traditions have been left behind to reflect the more compassionate sensibilities of modern human beings.
Don’t forget the Roman Games were once a happy way to spend an afternoon; people brought picnic lunches to public hangings; and witches were burned at the stake before a cheering crowd. The rest of the United States has grown beyond the delights of such torture. Our traditions aren’t necessarily anything to be proud of.

Eastport
Posted by Cheri Walton at 12:56 PM No comments:

Day of the Flamingoes 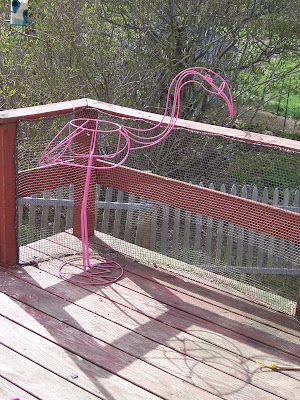 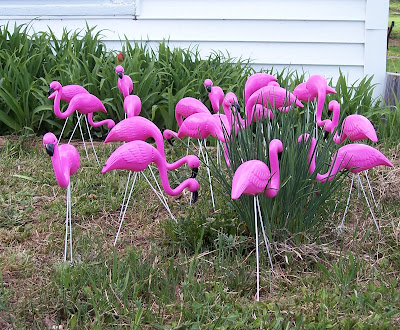 It was a warm day so I thought the flamingoes should go outside. Also I painted the rusty planter that is shaped like a flamingo, so it's ready for the season. I wasn't sure where to place the flock, but decided on the front "garden" where the birds are visible to passers-by. They are close to the house to discourage vandalism, though that is very rare in Eastport. Somehow I worry about them getting stolen, even though I leave my house and my car open 24 hours a day.

The plastic birds look like they just landed to rest and eat on their way to some other destination. I smile when I look at them.

Posted by Cheri Walton at 4:44 PM No comments:

As I walked the dogs by my old Water St. apartment yesterday I noticed that the rhubarb I planted there was flourishing. When I got home, I called the landlady and asked her if I could dig it up and bring it here. She was agreeable, so I today I went to get it. It turns out that rhubarb should be transplanted in the Fall, so I picked some and left the patch alone. I'll bring it here in a few months. 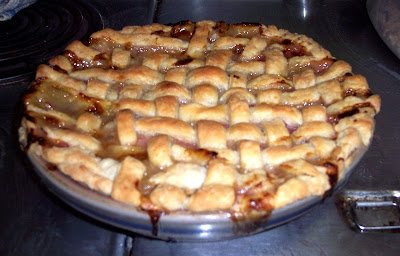 This is the first real lattice crust I've ever made, and I feel very accomplished. Thank goodness for the blog so I can share it. I alone will eat the pie, I have to confess. I would take it to David's, except that he has a rhubarb phobia, which is the reason I got it in the first place. When he was first cleaning his lawn of various weeds and underbrush, he found a lot of rhubarb. He dug it up with the intention of putting it in the trash post haste. Diana and I leaped at the opportunity to rescue it and I planted my share next to the house where I lived then. Since that was during my vagabond days, I left that apartment before the rhubarb had a chance to take hold and grow. Now, several years later, I am reaping the rewards of that initial effort. The bed is lush and close to the ground. It is the beautiful pink variety of rhubarb, and has produced enough to make pies for all of Eastport. I'll go back and get more so that I can freeze it for later. Or that is my intent. It will be hard not to eat it until it's gone. Already, since I began to write, I cut myself a substantial piece and ate it.

Posted by Cheri Walton at 7:41 PM No comments:

I reworked the top painting that I did in acrylic---it needed paint texture and color. I used oil paint, as I did in the other nude, which I plan to use in our "Blue" show at the gallery. That one isn't done yet. Both images are shamelessly plagiarized from a book of photographs 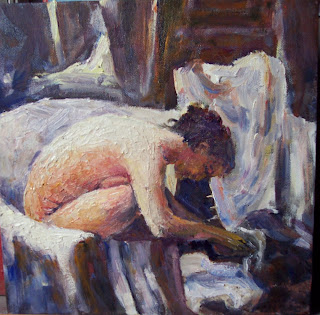 I bought years ago. It has a lot of very interesting pictures of the human body, including those with deformities. Not to everyone's taste, but wonderful black and white compositions using the figure. I plan on stealing more.

What am I to say about the last week or so? Life is off to the side, and not quite the sort to record in a blog, or at least not in Emma's blog. I go on without noticing much, keeping my eyes stright ahead. 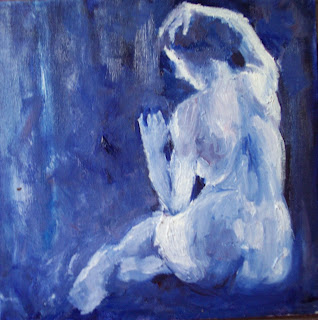 Posted by Cheri Walton at 5:14 PM No comments: 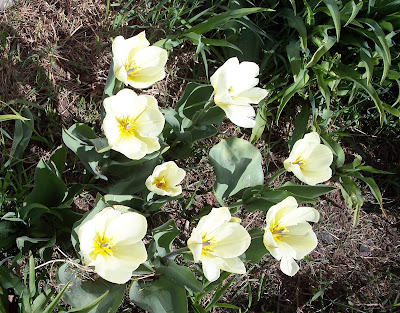 Well, I can't resist photographing them. They are so beautiful.

Posted by Cheri Walton at 4:56 PM No comments: 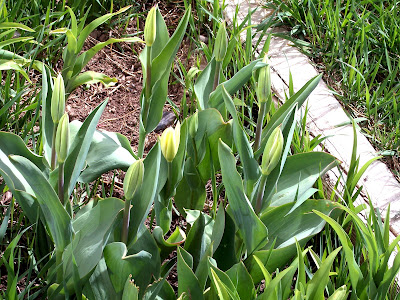 Spring is certainly stumbling on its way to Eastport, but the white tulips just ride the ups and downs in the weather. Nothing deters their steady growth. The other plants along the front of the house are not budded yet, nit even the other tulips. As I remember, most of those failed to bloom at all last year. I imagine the bulbs were put there many years ago and they have simply given up the ghost. The lillies will appear, though, and I bought seeds for poppies and cosmos, which I will put in the ground once the temperature settles down.

My days without Alice are passing.

Posted by Cheri Walton at 2:32 PM No comments: 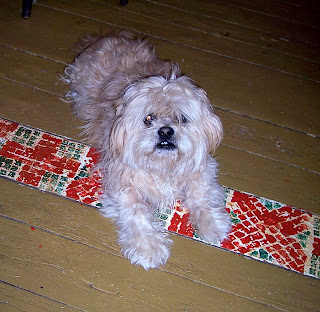 Poor Lytton was hurt in a multiple dog fight a few days ago. Toni had brought her dog over to play, but my boys were not in the mood. Toby is such a playful puppy that he doesn't know when he is being chastised. He thinks it's all in fun. His attempts to get his playmates interested ended up with tempers flaring and a four-way fight ensued. Once the smoke cleared, Lytton was slinking into the living room leaving a trail of blood.

I wasn't able to find the source of the bleeding, but felt that it couldn't be too serious. By nighttime, though, Lytton was obviously in pain, trembling and unable to walk upstairs. In fact, he tripped over such small obstacles as the doorjamb. I carried him up to bed, and after considering a night call to the vet, took a sleeping pill. The next morning he was worse. I envisioned internal injuries and dire consequences. I beat myself up for not calling the vet sooner. My reluctance involved finances. I have been suffering since I lost my job taking care of Greg's dogs and had a very small amount of money to last the next two weeks. Nevertheless, I knew I had to do something. I called and begged for mercy. Kathy agreed to extend credit to me and off we went to Perry.

Well, it turned out that Lytton had a puncture wound on his tail, bruises, and sore muscles. He got a shot of something for pain and within an hour was pretty much his old self. That dog causes me so much worry and anguish. He does not take discomfort well. Far from stoic, he makes mountains out of molehills. And I always think he is at death's door.

My emotions ran the gamut, through concern, dismissal, fear, guilt, panic, and relief. What can I do? I love my best boy.

Posted by Cheri Walton at 4:14 PM No comments: