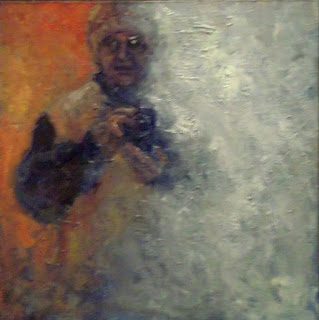 I wondered how I would use the canvas I had painted over so many times, and this is it.  A while ago I took a picture of myself in the mirror.  I forgot to turn of the automatic flash, and the resulting image was very intriguing.  I think I mentioned before that I had plans for it, and here it is.  I'm not sure it depicts the real situation, but I like the image.  It's the first time I've painted myself with glasses.

Posted by Cheri Walton at 6:06 PM No comments: 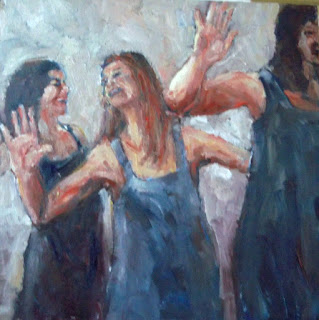 This is the latest effort with my new passion of doing figures.  I've started a new one, but already I have lost interest in it, and will probably paint over it.  I've already painted that canvas three different times, so I better pick a subject that can stand a very heavy background.

I read an article in the paper this morning about a new gallery in Bangor.  All the members are people I know, and I was hit with an unsettling pang of something like jealousy, or regret.  I am very uneasy when I see my fellow Bangor artists expanding their careers.  Many of them have their own studios and participate in hundreds (or so it seems) art shows and events every year.  They are known in a fairly good-sized community, exhibit all over the state, sell paintings..........what one would have to call well-known local artists.  They are a clan to which I once belonged and still could if I hadn't come to Eastport, retreated into my solitary make-shift studio.  It takes me some time to remember why I did it, why I chose anonymity over that limited fame and even more limited fortune.  It gave me an identity that pleased me, especially when I was president of the local art society.  I was asked to speak at community events as well as art events, I judged art competitions, I did demonstrations at meetings of artists.  I was the voice of the art community.  I felt admired, or at least respected, as an artist.

It takes a day or two for me to remember why I did it...... to settle down and accept what I have done with myself.  It's a matter of who I want to please I suppose.  I chose admiration to reward my efforts, placing public approval above my own.  Validation by others is a large part of the creation of artwork for most small time artists, a group to which I belong.  When viewers are willing to turn over money for their paintings, they feel they have achieved a certain modicum of success.  It is this also that gains them favor and envy from their peers.  I gradually noticed that the pleasure from selling my work came from the fact that others were impressed instead of me.

Nevertheless it has taken me a long time to understand what I'm doing.  When I resigned as president of the Eastport Gallery I worried that I would have no identity at all.  Almost immediately, though, I was more comfortable with doing art.  The pressure of selling eliminated, I felt free.  I found out that I really did enjoy myself much more when I didn't have to think of exhibiting.  I also faced the fact that I didn't sell much work anyway, so I might as well do what I wanted rather than trying to guess what would please the public.  After a relatively short time, I was happy to find that my dreams of being free of commercialism were just as pleasing as I had imagined.  Most of the time I am well-satisfied with the choices I made concerning artwork.

But,then, there comes an article in the paper about the new gallery.  I have feelings I don't quite understand.  But they will pass.

New member of the family 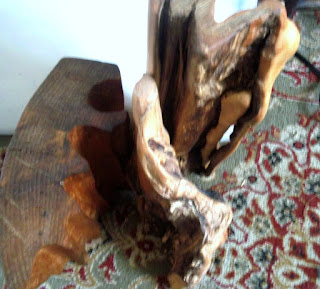 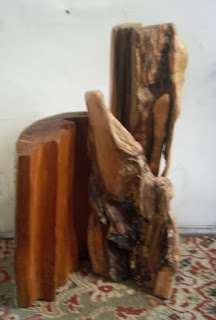 Woogwood number 3 joins his lost brothers in their new home. 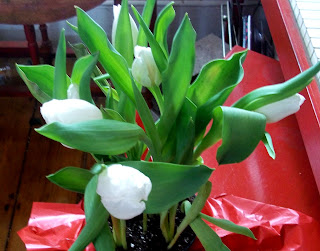 I love white flowers, so I am really delighted with these tulips.  They were a valentine gift from David and Thom, who know that I prefer plants to cut flowers.  When I got them there were no blooms or even buds at all, and I feared for their lives.  My house in the winter is so cold that even the hardiest hardy plants must struggle to survive.  However, within a couple of days one bud appeared, followed by five more.  Now they are all open.  I am surprisingly cheered by the sight of them. Oblivious to the dirt, clutter and cold, they went about their own business.  They are simply what they are, doing what they do.  I know they would have done the same no matter where they were.  They needed no encouragement and no reward.  I find them admirable....they were determined to be beautiful without encouragement or reward.

Whenever I think of the way plants do things, it reminds me of the professor I had in my freshman creative writing course.  I described a geranium being planted at a grave.  Dr. Holmes remarked negatively on my indulging in "the pathetic fallacy."  You can see how much good his criticism did.

Posted by Cheri Walton at 1:19 PM No comments: 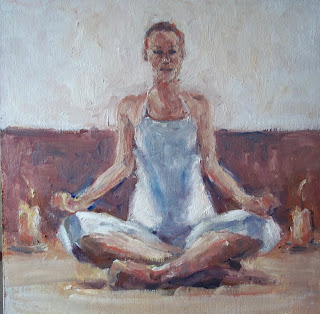 For some reason I have become enthralled with painting figures.  All it took was the sight of an exercise group in New Mexico Magazine.  If I should ever become famous, I would be buried in copyright suits.  Luckily, that is not going to happen and I can go on copying photos with reckless abandon.  I keep altering my style somewhat, trying for something less descriptive.  My saving grace is that what I do is of absolutely no importance to anybody.  I have the freedom to do anything I want. 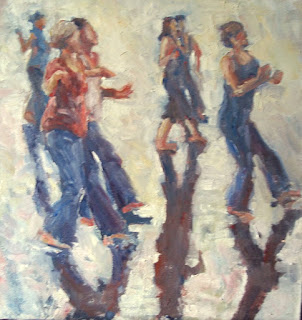 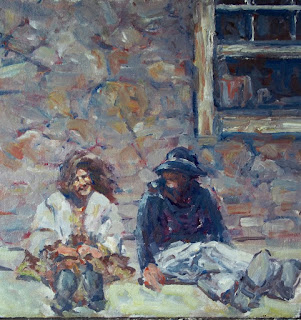 Posted by Cheri Walton at 10:37 PM No comments: 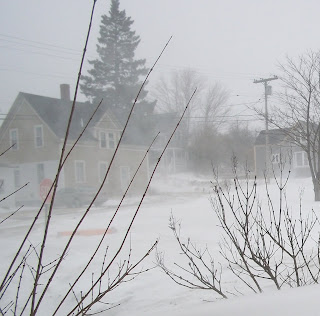 Well, as I keep growing older I sometimes start to think I have seen about everything.  Nevertheless, almost as soon as the idea crystallizes in my mind, something new comes along. Today is an example of that. I have lived through hundreds, perhaps thousands, of snowstorms and one would think they would start to blend together.............and it's true, they do have a significant sameness.  But they all have their own peculiarities, too.  There isn't one that doesn't prove the endless permutations of snow, wind, and cold.

Last night I kept waking up to the sound of the wind that had been predicted.  This solid house actually shook for the first time since I've lived here.  The dogs were nervous and hid under the covers, pasted up against my body as if I could protect them from whatever catastrophe seemed imminent.  I looked out the window in the morning and it looked as if there hadn't been much accumulation of snow.  Nevertheless, the howling of the wind was intimidating.  I put on my robe instead of getting dressed at once (a first) and came downstairs.  The dogs did not follow me, confused at the change of routine, and stared at me without moving from the bed. The sound of dog dishes being filled brought them down, though, and Benny went to the shed door to go out.  When I opened it for him, we were faced with a wall of snow.  The wind had blown the outside door open and the shed was full of snow.  I knocked it down with a broom, and on the other side the dog yard was bare.  There was not a flake of snow on the car, parked a few feet away.  The wind had knocked down the dog fence.

Next I went to the front door, where from the window it looked like nothing had accumulated there.  When I opened it, though, a drift had covered the bottom half of the door and a flat wall of snow remained upright in front of me.  A foot away, to my right, the ground was bare.  I put on my boots and stomped a path through the drift to the open grass for the dogs.  I put on their leashes, stood in the doorway as they bound through the door.  The wind hit them, blew their ears back flat, and made them squint their eyes.  After a very quick pee they raced back inside.

So, here we are.  Miraculously the electricity is still on, so we have light and heat for the time being.  I took the camera outside and tried to capture the atmosphere, but the pictures in no way do it justice.  Most of them were blurry due to the difficulty I had standing still against the wind.  I didn't linger long, either, standing in my boots and bathrobe. 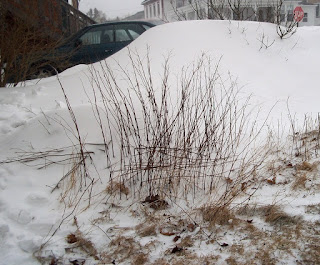 Posted by Cheri Walton at 12:28 PM No comments: 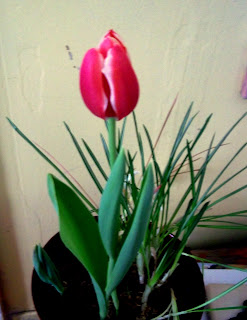 I got this for Christmas in the form of a bowl of dirt.  Bulbs had been planted in it, and somehow persuaded to grow and bloom in 50 degree temperatures. I hardly believe it happened, but here is the evidence of how we bully the rest of nature (not that we need more evidence than what we see every day).  I've been quite fascinated by this process, yet somehow I find it sad.  I guess it is the same feeling I have about caged animals.  I don't like cut flowers, either....something to do with the enormous ego of human kind, manipulting everything to serve its own needs and desires.

I try not to hold its unnatural heritage against this tulip.  As far as I know tulips have always been a commodity, raising Holland from poverty into great economic power (albeit temporary). I doubt that they ever sprang into existence as we know them today without being poked and prodded into doing so.  My erstwhile creative writing professor accused me of "pathetic fallacy," a term I find quite editorial and arrogant.  His criticism obviously did not alter my feelings on the subject, or my use of it in writing.

This tulip deserves my admiration.  I am the only one who can fulfill its mission.  And it is quite pretty......

Posted by Cheri Walton at 1:53 PM No comments: 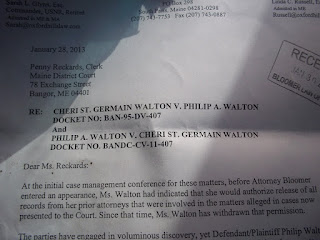 I received copious correspondence from my lawyer yesterday that included copies of letters he received from Phil's lawyer.  There are several references to this blog in it.  Apparently she and/or Phil scrutinize it regularly for evidence of malice and wrong-doing.  Amazingly, they find it in the form of my unfulfilled potential, as well as misinterpretation and ignorance of the facts.  It seems that one of my biggest crimes is not becoming a successful commercial artist.  This is a recurring theme in their complaints.  I am tempted to defend myself, except that what I did with my life after Phil walked out is irrelevant.  Why did Sarah herself not become a supreme court judge?  Why did Phil not become a dealer in vintage cars?  Anyone could have done things differently.

The law is very convoluted, and I have to assume that this woman knows what she is doing.  Somehow she must feel that Phil has been wronged and that I deserve to be blamed and punished to the extreme that my only source of income is taken away. When I was dealing with the firm of Rudman Winchell all those years ago, I was amazed at the attorneys' compassion and sense of justice.  Because of them, I was convinced that the unflattering reputation of lawyers was a huge misunderstanding by the general populace.  I am seeing the other side now, being forced to look at the vicious self-centeredness I never knew existed, particularly not in my own husband, and the willingness of attorneys to take advantage of it.

One belief I have always held is that the lust for money corrupts and destroys human values.  If nothing else, this experience is proving me right.