Day at the Farm 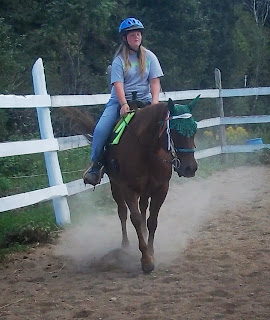 I still work at the horse shelter two days a week, with a reduced workload that doesn't require much from my shoulders.  When I arrived Tuesday, BJ, Anna, and Tina were there, along with baby Damon.  I am getting soft in my old age and found the baby cute......so cute that I took his picture.  His big sister BJ was riding Lena, her horse adopted from the shelter at Christmas.  Anna, whose father just died of cancer, came along to watch while her mother made funeral arrangements.  Tina, mother of BJ and Damon, has worked at the farm for a long time, but obviously is busy elsewhere for awhile.  "What were you thinking?" said I.  "I wasn't thinking, obviously," said Tina with a laugh.  Damon  has a congenital heart defect that has to be repaired surgically, but is expected to recover completely. 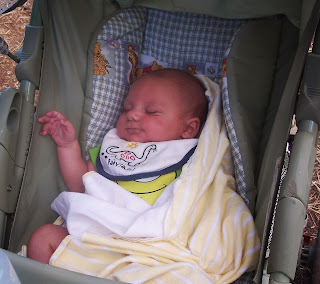 I am so glad that I am still part of the farm crew.  I am grateful that I have a chance to keep my contact with horses, despite my age and physical limitations.  So often it feels necessary for my continued satisfaction with my life. 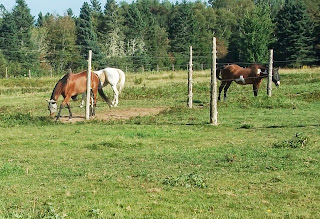 Posted by Cheri Walton at 11:40 AM No comments: 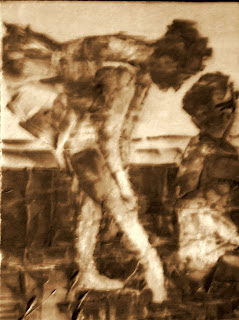 Posted by Cheri Walton at 5:51 PM No comments:

This is part of my recent work.  I plan to cut it to this size because I messed up the rest of of it.  I'm trying to learn how to use the bigger point and keep cutting gouges into the wood.  I need to remember that I am burning the wood, not engraving it.  Still, I like the image, so will get out my trusty jig saw and get rid of the right two thirds of it.

Amazingly, I seem to have a cold.  One wouldn't think that worthy of mention, but the last time I remember having one was in 1997.  And even that one was after many many years of absence.  It's not a bad cold, but I am quite interested in it just the same.  I observe symptoms I had forgotten existed and experience them with amazement.  Each cough is noted and evaluated, measured against nothing since I have nothing with which to compare it.  Each sneeze fascinates me, each sniffle , each nose-blowing.  My throat is sore, another unfamiliar occurrence.  So far it is all so fascinating that I haven't had time to consider if I "feel" bad.  What does that mean, exactly?  I feel different, but can not judge it as good, bad, or simply unusual.

Once I had pneumonia, in 1978 I think.  This cold is a little like that without the machines and shots and pills, the nurses and the respiratory therapists.  I was in the hospital then, which certainly made the experience more notable.  I existed outside of the regular world.  People brought me my food, visitors came.  I watched TV and read.  All that was required of me was to go to the bathroom myself, though I could have had help with that, too, if I had wanted it.  I rode in a wheelchair whenever by presence was required elsewhere in the hospital, usually the X-ray department.  My doctor visited me twice a day , appearing to have nothing on her mind but my well-being.  I was tired then, too, but it was completely acceptable that I sleep during the day.

No resort could have been more enjoyable.
Posted by Cheri Walton at 2:27 PM No comments:

Even though I am painting, I can't seem to stop playing with my wood burning.  The more I do it, the more possibilities I see.  I couldn't resist trying a version of my old "Apple for the Teacher."  It has had its day as a life sized sculpture, a monoprint, a lithograph, an etching, a drawing, a painting.  I like this one.....much less menacing than any I have done before.  The original was a cast of my own body, which I did myself out of modesty.  The only part I couldn't get were my shoulders, so I used Jesse as a stand in.  Then I built a coffin out of foam core and put the body in it.  I packed it with real apples, which rotted in a delightful contribution to the whole concept.  By the time the show ended, the whole gallery smelled like rotten apples.  I was delighted.

I've said it a thousand times.....I loved school and would like to have remained an art student for the rest of my life.  Certainly I did my best work then.  The other one is from a photograph of Lubec that I have always liked.  I experimented with a different point to see if I could get a different look.particularly a wider value range. I accomplished that, but the wood is gouged to pieces from my lack of control.  I see its potential, though.

That point sure makes great shingles.....

Posted by Cheri Walton at 6:47 PM No comments: 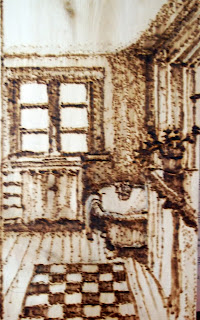 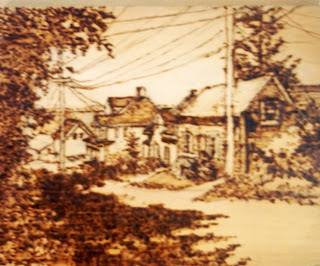 I'm branching out in subject matter.  I really like these.

Posted by Cheri Walton at 6:20 PM No comments: 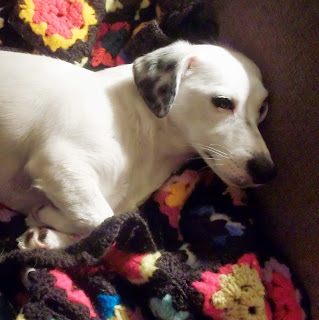 This is Willy taking a nap on the couch.  I cropped the picture because it showed all too clearly how fat he has become.  The extra weight has done nothing to curb his physical activity, but I know it is unhealthy, as well as a detriment to his health.  I'm trying to keep him on a diet, but so far it isn't working.  It's a problem I haven't had with other dogs, so I am somewhat at a loss.

Nevertheless, he continues to be a wonderful little dog and a great addition to the family.  Walking him is a challenge for me because he is so wild and full of energy.    But I have never claimed to be any sort of dog trainer, and every one I have ever had behaved exactly as the spirit moved them.  It gives me a lot of pleasure to see them be themselves without having to submit to human standards  of behavior.  It gives me a great sense of satisfaction and self-approval to know I am providing for them, making their lives comfortable and happy.  I believe that because they are happy, they are pretty much well-behaved in spite of their lack of discipline.

I guess that's why I like small dogs.  A big dog needs to learn some social behavior to accommodate living with humans.  Not my boys.  They can be what they are and I can be what I am and still be in perfect harmony.

Posted by Cheri Walton at 12:14 PM No comments: 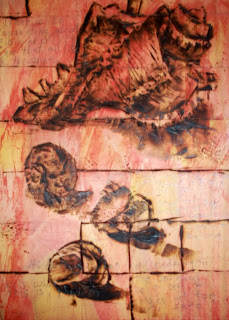 Armed with my new woodburnig kit (donated by the Woogs), I continued to experiment.  One very handy thing I discovered was the power of sandpaper.  I like this image of my ever-engaging shells.  To ad interest I poured some paint on the finished picture and added the partial grid.  I never get tired of Fibionacci (sp?).   I'm gaining control, but I think it would all be more predictable if I got wood that  wasn't pulled from a junk pile.

I hate to discuss money here, but lack of it has me unusually down in the dumps.  When I went to register my car (due in December) I then had to have it inspected.  It failed the inspection, which seems to be a recurring theme in recent months.  My house and car are by state standards pieces of junk unfit for use.  After over a hundred dollars for registration and five hundred for repairs on the car, I find myself overdrawn on all of my financial accounts....checking and three credit cards.  This doesn't count the nine hundred I still owe for Patrick's medical bills.

I received an increase in credit on one card only last week, for good behavior.  The notification was barely posted before I spent the money and overdrew the account.  I have kept that account happily solvent ever since I got it, paying off the balance every month.  Now the bank must be clapping its hands that it has finally figured out how much credit it takes to force the inevitable.  All three of my cards were given to me because I am a known deadbeat.  Under the guise of "helping" me re-establish good credit they have tempted me with cards especially designed for my kind....high interest rates and penalties.  I have responded as expected.

Well, it's depressing that I am so predictable and unable to learn my lesson.  I know what comes next.  Letters, phone calls, threats, referrals to collection agencies.  I suppose email has been added since I last went down this road.  Eventually I will quit paying, though not before I have paid enough to make it financially beneficial to the banks to have had me as a customer.  The whole routine will take at least a year, with follow-ups every six months or so offering settlement amounts (since they understand these are hard financial times).  These will be tossed into the wastebasket unopened.

I won't live long enough to see the end of it.

Posted by Cheri Walton at 10:29 AM No comments:

I got a new woodburning tool as a gift and couldn't wait to give it a try.  It has different points for making different types of lines, though I found that the one I am used to works the best, at least at this point.  The new one gets a lot hotter than the old one, and I really need better wood, but I have had a day of fun experimenting with it.  I practiced on some things I have already done, then set out to make a masterpiece.  I used an image I invented back in my school days to illustrate an e.e. cummings poem.  I identified with it, and still do.  The results are less than stellar, but I like the idea.

It was fun to dig out the charcoal drawing, which took me back to the days when I had some imagination.  I remember I made this image up  sitting on the porch of a time share condo in Key West.  A student of mine invited me in payment for participating in a painting workshop I taught.  I was working on a project for a class in sequential drawing.  The words of the poem still reverberate in my head (in e.e.cummings' voice since I had a recording of him reading it), saying "I am a man, I am an artist, I am a failure."  It seemed, and seems, so perfectly descriptive of an artist's life and work.  He sits on top of three chairs, perched on a wire high at the top of a circus tent.  The crowd watches anxiously.  The wire begins to swing, the chairs fall, but the artist does not fall.  The chairs are caught by somebody or nobody, but the artist doesn't see or care, remains aloof and disconnected.

I was full of "angst" in those days.

Posted by Cheri Walton at 2:49 PM No comments:

I've been using the wood burning tool to make faces on these blank horse heads, and then painting them.  Supposedly they will be wildly popular items to sell at fund raising events for the shelter.  I'm having fun doing them, and it's giving me plenty of experience with the tool for future use. 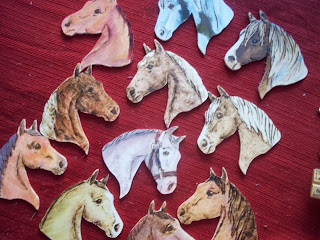 Posted by Cheri Walton at 1:09 PM No comments: 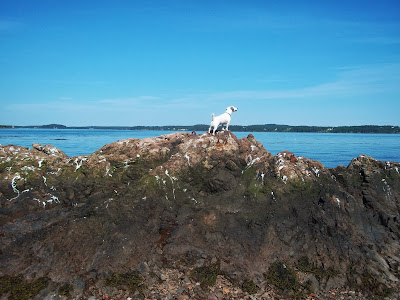 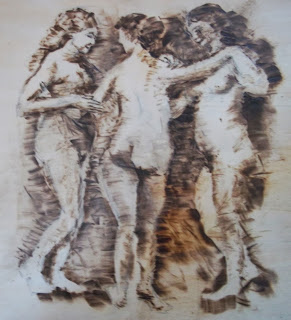 Posted by Cheri Walton at 11:17 AM No comments: