Our Christmas was a festive day befitting

the occasion. In the first picture is my brother Mike on the left, then David, then Sydney and Richard. Thom was probably fixing food. He seems to be always fixing or serving food, which I hope is his choice rather than his obligation. He is a wonderful cook and our dinner of stuffed roast pork with several accompaniments was wonderful. The second picture shows the origami frogs I made for each person to play with. This was not the hit we hoped for, but I enjoyed doing it anyway. The third picture is, of course, Dylan playing with and destroying his present of a stuffed Dalmation. Next is my contribution, the Christmas log that has been part of every Christmas I have ever had. My mother used to make it. She decorated it the way I did this year, with cherries and aluminum foil leaves. The sprinkled nuts is my addition, but otherwise it is faithful to hers. The last picture is, of course, the tree. I don't know why I couldn't get a clear picture of it, but it was beautiful.

In the morning we opened gifts and had breakfast (Thom's wonderful omelets, of course, and bacon

). Because of this adopted family I lack nothing in the way of holiday tradition and celebration, despite the fact that my kids weren't able to come and share it all. Mike was an added one-time pleasure.

I had intended to drive to Bangor and have lunch with Elizabeth, who is visiting her son for the holiday. It was one of the very few chances we get to see one another since she moved to Cape Cod. It snowed yesterday and the day before, unfortunately, and I didn't want to tackle the 2 1/2 hour drive with the roads in poor condition. So the opportunity was missed......the only disappointment of what was otherwise an ideal Christmas.

Portrait of Gaye and Christmas Eve 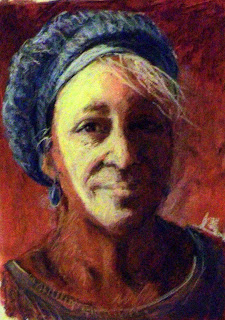 I spent most of the day finishing this portrait that I started a few days ago. It's from a picture I took of an old acquaintance, or possibly I should call her a friend. She shows up in my life off and on because of Diana, who somehow came to know her after I did. She comes to Eastport with Diana sometimes and stays a few days. I came to know her when I was in school studying art is the 90's. She was a big presence in the Art Department, partly because she's black, which is a rarity in Maine, and partly because of the fact that she always had children hanging off her. She had a big family with several daughters who had babies. These daughters were going to school, too, and brought their babies with them. Gaye often had one in tow while one daughter or another was in class. They had great names like Divante and Nahisi, with black curly hair and big smiles. They were the best natured babies I have ever seen, as well as the the most adorable. Everyone loved them and helped take care of them. It was far from unusual to find one in a baby seat on the printing press or tucked under somebody's chair in art history class. During the student critiques of our work, one or two of them would be playing quietly nearby.

Anyway, when she was here last I was struck by the way she looked with the sun shining in the window on her face. I took pictures of her so that I could paint her, and this is the first one. It's a pastel, which I haven't done in awhile. I thought it would be fun to get the contrast of light and dark using pastels, and it was. The portrait looks very little like Gaye, who is probably in her late 60's. This person looks quite young. I didn't want to labor over getting a likeness. This is all about the light. In a different medium that is more easily manipulated I may try to make it look more like she actually looks, which is really quite stunning.

This is Christmas Eve. It's the first time in years that Sydney didn't have her usual dinner party, which left a lot of us twiddling our thumbs. David, Thom, and I had breakfast this morning together with Meg. who hosted the occasion even though it was at their house. Meg doesn't have people to her house because she doesn't want anybody to see what a mess it is. It was very enjoyable, as is any occasion when Meg is there. She is in her eighties and quite frail, but is wonderful company. She has had a very interesting life, and actually still does. She will be off to Los Angeles for a few months in a couple of weeks. Like Gaye, and actually so many people in my life, she is an unusual character. Our breakfast lasted until after noon, a fitting Christmas party. I haven't decorated at all, but I spent time making gifts for David and Thom. Mike will be at Christmas dinner at their house tomorrow......a kind of last hurrah since he is moving back to Florida after only a couple of months here. This place at the end of the earth isn't everyone's cup of tea, and he just doesn't like it. I am sad that it didn't work out because we both have been planning and anticipating his retirement here for years. Despite the expense, which has been considerable, he is wise to realize that he's made a mistake though, and take steps to rectify it. It's a disappointment to us both, but it's the right thing for him to do. This will be our only Christmas together for awhile. 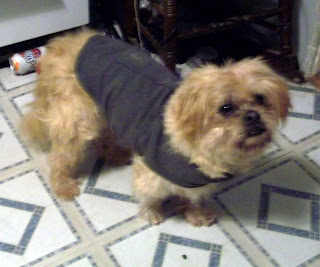 Here is Lytton wearing the expensive coat I bought for him that is guaranteed to reduce stress in dogs. It's called a "Thundershirt." Well, I can't endorse it for stress, but it's cute and I'm sure keeps him warm. 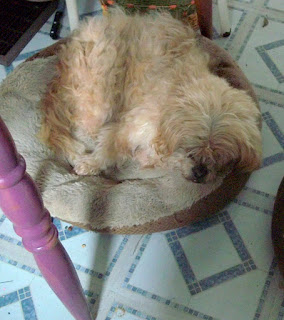 Lytton spends a lot of time sleeping, and when he isn't sleeping, he is usually unhappy. It is too sad for words that he has become so incapacitated by arthritis and senility. The quality of his life is compromised (a good word for "sucks" or "horrible" or "devastating"), This is a topic I have not been able to write about, and still can't. Lately I have been talking about him with my old trusted vet in Bangor about the inevitable decision to put him to sleep (i.e. kill him). I'm not able to make that decision, so he is on pain medication and anti-anxiety drugs to keep him comfortable. I wear ear plugs to bed so I can't hear him barking, though I still hear him. There are times he will bark for hours at a time, at nothing. There is nothing I can say to describe how difficult the situation is for both of us. 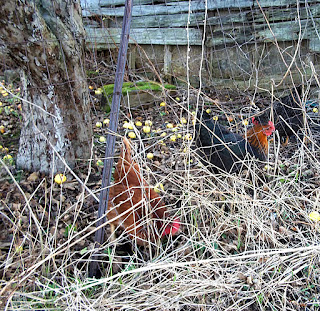 Every day I re-do the gate and fences of the chicken house, along with piling countless pieces of wood and wire on the roof of the house to prevent jumping over the fence. Almost every day at least one chicken escapes. Recently the pace has accelerated. Two days ago it was two chickens, yesterday it was four. In this picture the girls are camouflaged in the dead grass on the far side of the building that sits between my back yard and Diana's. They are feasting on the countless apples on the ground under her tree. These new escapees are unaware, apparently, that they are doing anything wrong and don't run away from me like Penny does. This makes it more difficult to get them back into the pen. Even though they will follow me if I call them, they tend to get sidetracked. To expedite things, I resort to picking them up, one by one, and carrying them back where they belong.

The dogs have escaped lately, too. I have had to chase Patrick and Benny all over the neighborhood
several times, worrying all the while that they will encounter an escaped chicken. Yesterday one of the horses at the shelter escaped when I was putting hay in his paddock, and it took me over a half hour to catch him. Horses react much like chickens, ignoring you until you are about to grab them, and then racing away. Dogs, on the other hand, prefer to taunt you.......racing up to you happily and then darting away, hiding and then reappearing........generally making a game out of the chase. Some days the things that take up my life seem quite comical. 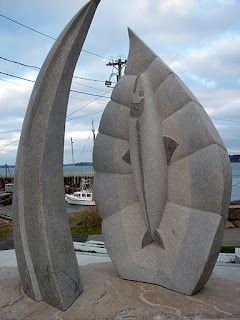 This is the new statue installed downtown last week-end. Somehow I ignored the events that lead to its presence so have no idea what led up to it. It had to do with some funding for art installations, and I know there was controversy over the design. I remember something about a proposal being rejected because of the breasts on a mermaid............in any case, thank goodness for the prudishness of the city fathers. What Eastport does not need is yet another mermaid, with or without breasts. Sometimes I think I will throw up if I see another fish-tailed call-girl wearing a simpy smile. Well, I digress. I love this sculpture, criticized by some as being too modern for Eastport. However it was chosen, I have to applaud it. What makes a place modern or not modern is its aura, its atmosphere, its timeliness. Perhaps Eastport looked more old-fashioned and quaint before the statue was here. But the statue doesn't replace the old, it just ads to it. It shows that Eastport is alive now, too, in the present, building on the past but not stuck in it.

The last attempt at modernity in the art realm has been dismantled and hidden away somewhere. It stood across from the post office wearing a 60's style pop-art face. I didn't mind it, but I didn't like it either.......it looked like the city was trying too hard to look "cool." This new one is a class act.