Today I took Benny to the vet to be euthanized.  He has been declining for so long I can barely remember when he was the feisty, aggressive, dangerous dog that I adopted from Phyliis because her husband wouldn't have him in the house.  Over the many years I had him, he mellowed somewhat, but he was a biter to the very end.  I have known for some time that it was time for him to go.  He was deaf, blind, and barely able to walk.  He was incontinent much of the time.  Nevertheless, how I hated to make that decision.  How do I have the right to decide that anyone should die?  Once life is gone, there is no changing your mind.  And who is to decide when non-existence is better than life, no matter what that life is like?  The decision to end Lytton's life was in that way easier to make.  He was so obviously suffering with no chance of relief.  But Benny wasn't suffering physically as far as I could tell.    He was just empty of everything that made him a dog.  He never knew where he was, couldn't find his way out of a corner, couldn't find his food or water.  Touching him startled and frightened him.  He slept most of the time, and the rest of the time he wandered around bumping into things and falling down.

Still, death is permanent.  Nothing makes that okay for me.  And deciding that Benny would no longer exist was very difficult.  He was a rotten dog, but he was a little piece of life that I have snuffed out.
Posted by Cheri Walton at 6:57 PM 1 comment: 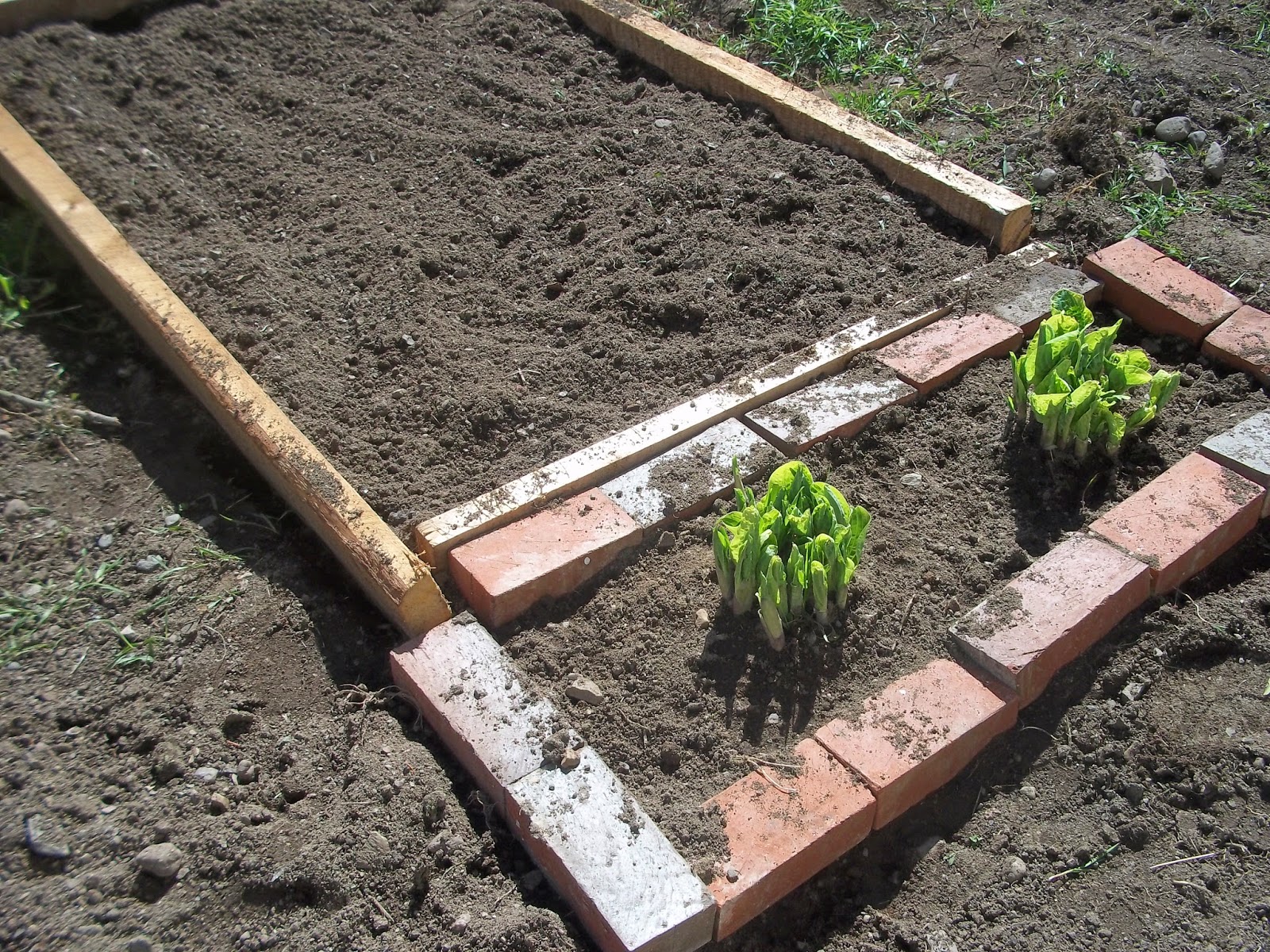 The more I thought about it, the more I felt uncomfortable about the vegetables trying to grow in the shade.  I may as well at least start out right.  So I dug another garden in a spot that gets the sun most of the day.......only about a foot from the first one.  Then I planted two Hostas at the end of it where the sun disappears earlier.  Those poor things have struggled to survive for years in their sunny spot in front of the house.  It is too much sun for them and they turn brown and die about the middle of July.  I'm hoping that everyone will be happy in this new environment.  The Hostas will also show the vegetables what they are supposed to do...grow.
Posted by Cheri Walton at 9:51 AM No comments: 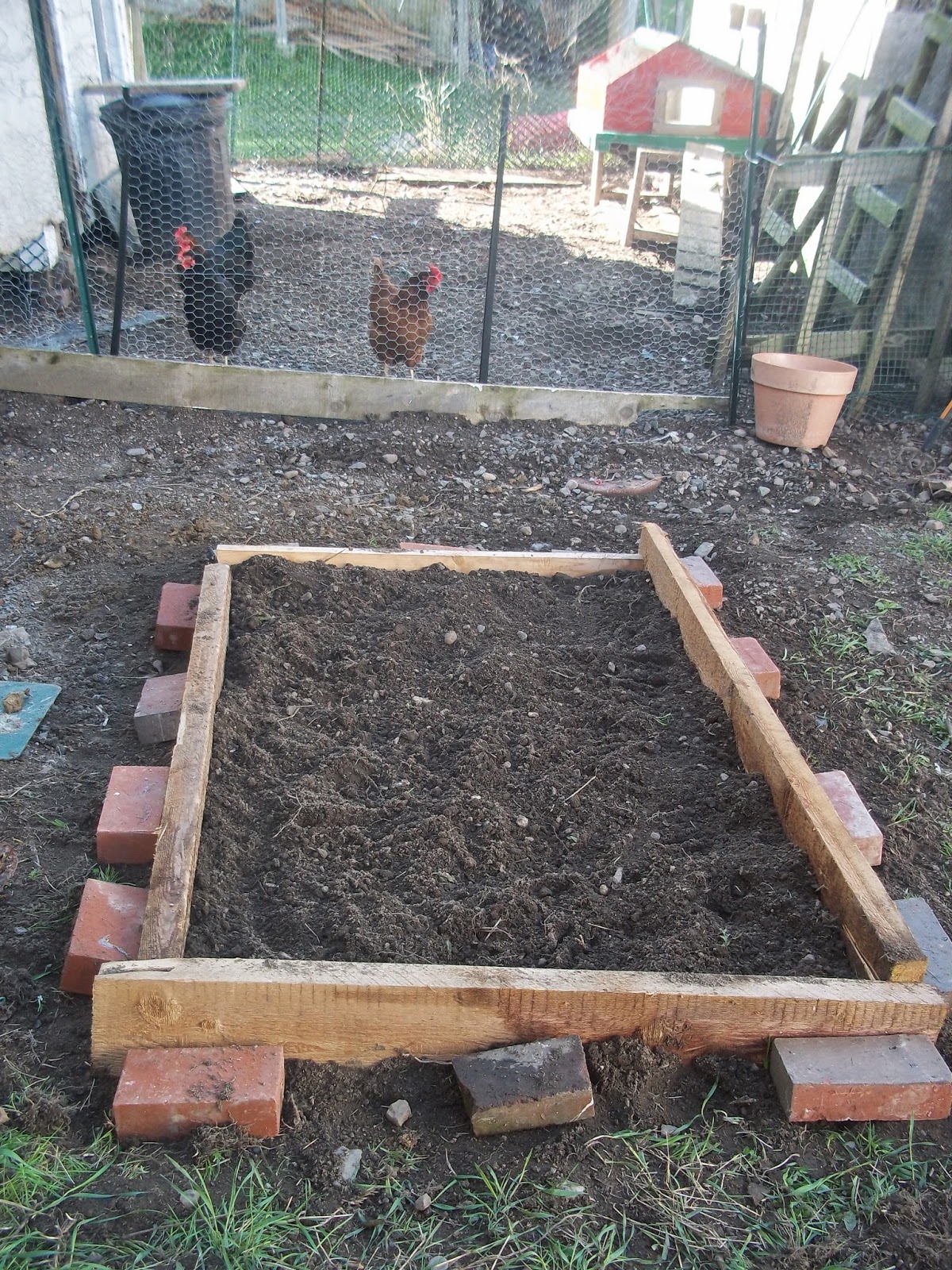 Inspired by the fact that Thom is going to give me some tomato plants that he started from seed, I decided to make a vegetable garden. A major problem is that it is shaded by the house in the afternoon.  Well, the plants will have to do what they can under the circumstances.  Since I dug the garden in a part of the yard that used to be part of the chicken pen, they should be well fertilized.  My plan is to actually take care of this garden.  If I do, it will be the first time I haven't lost interest by the end of June.  Time will tell.
Posted by Cheri Walton at 5:32 PM No comments:

Life at the Farm 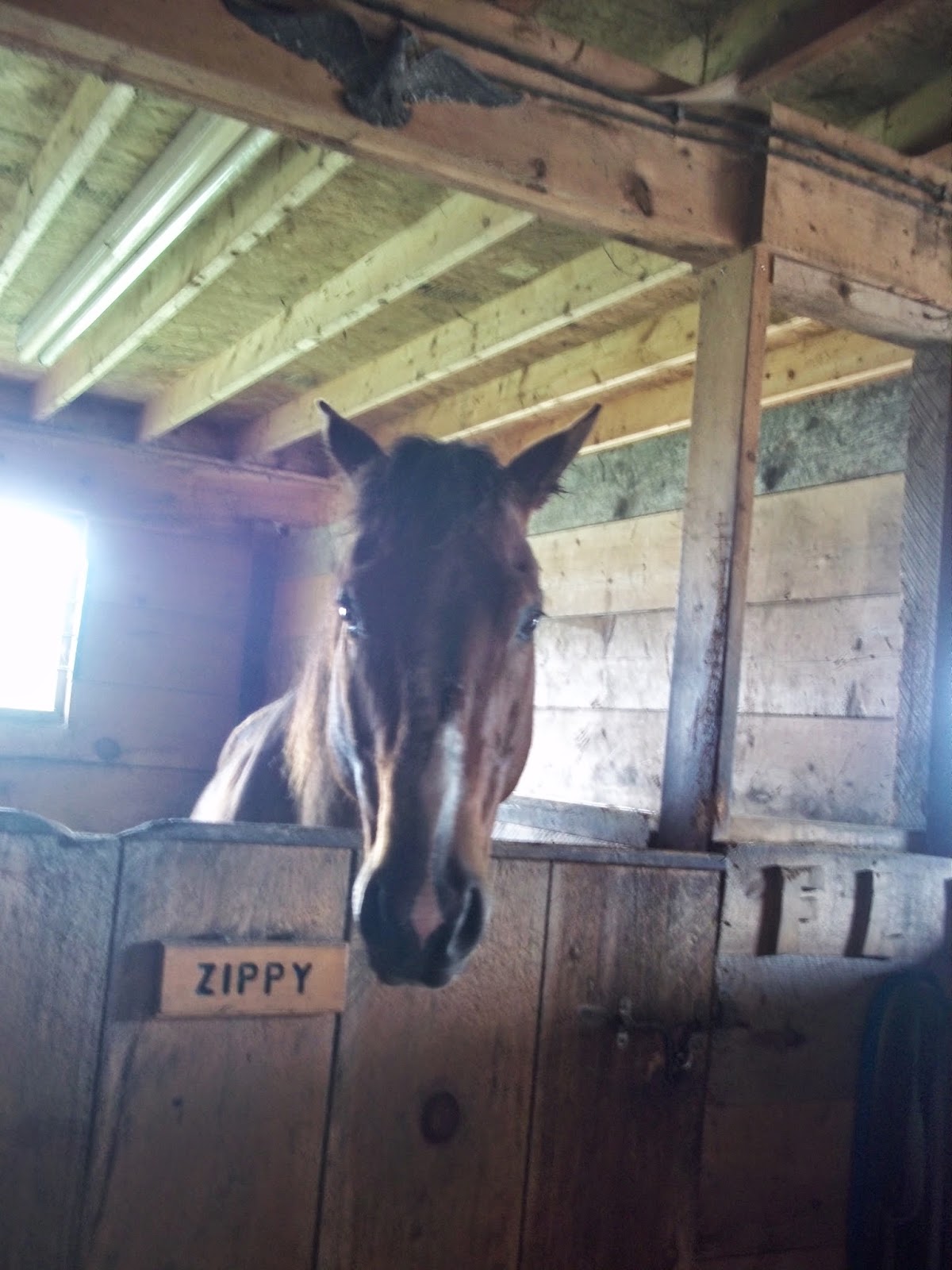 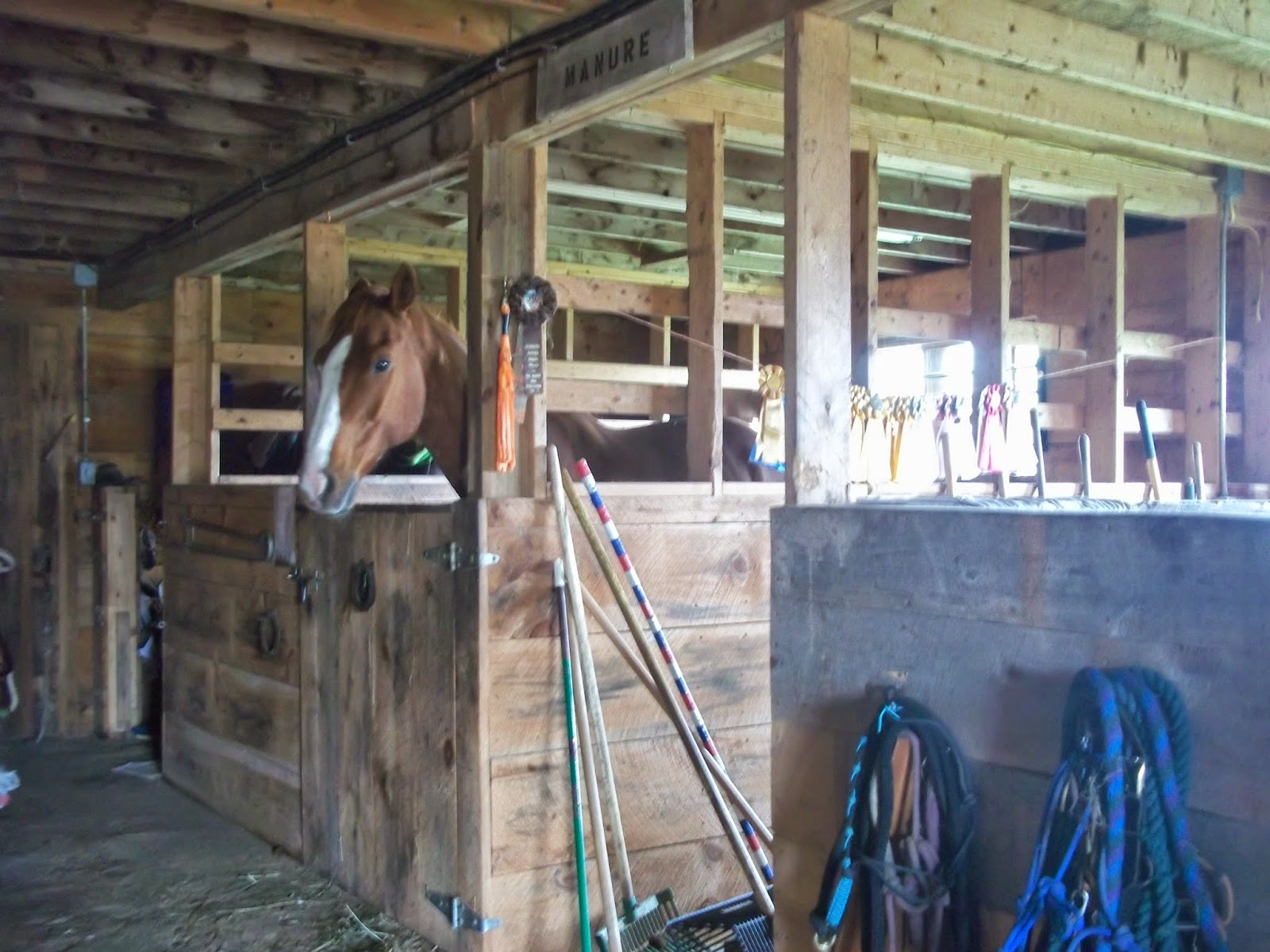 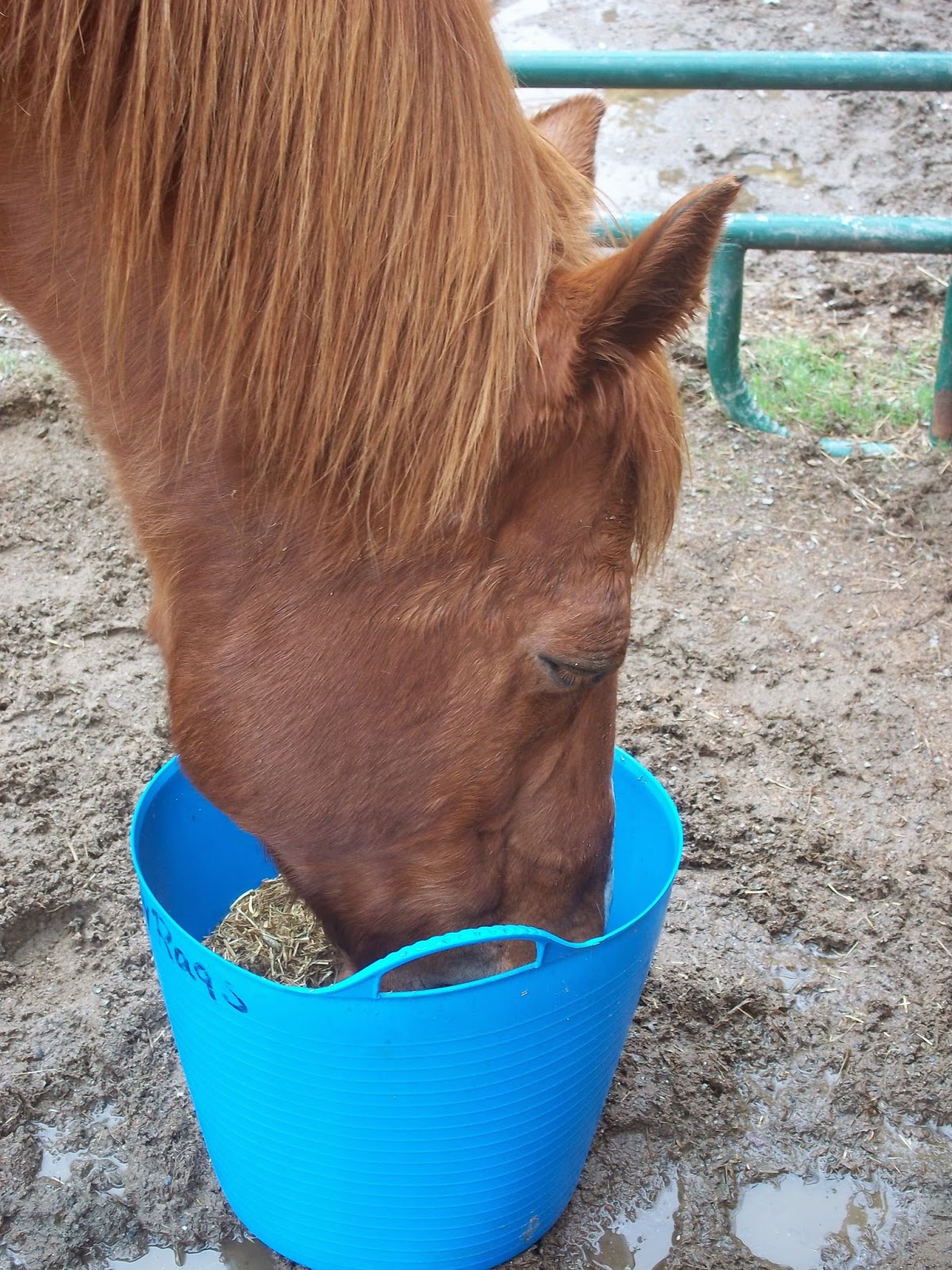 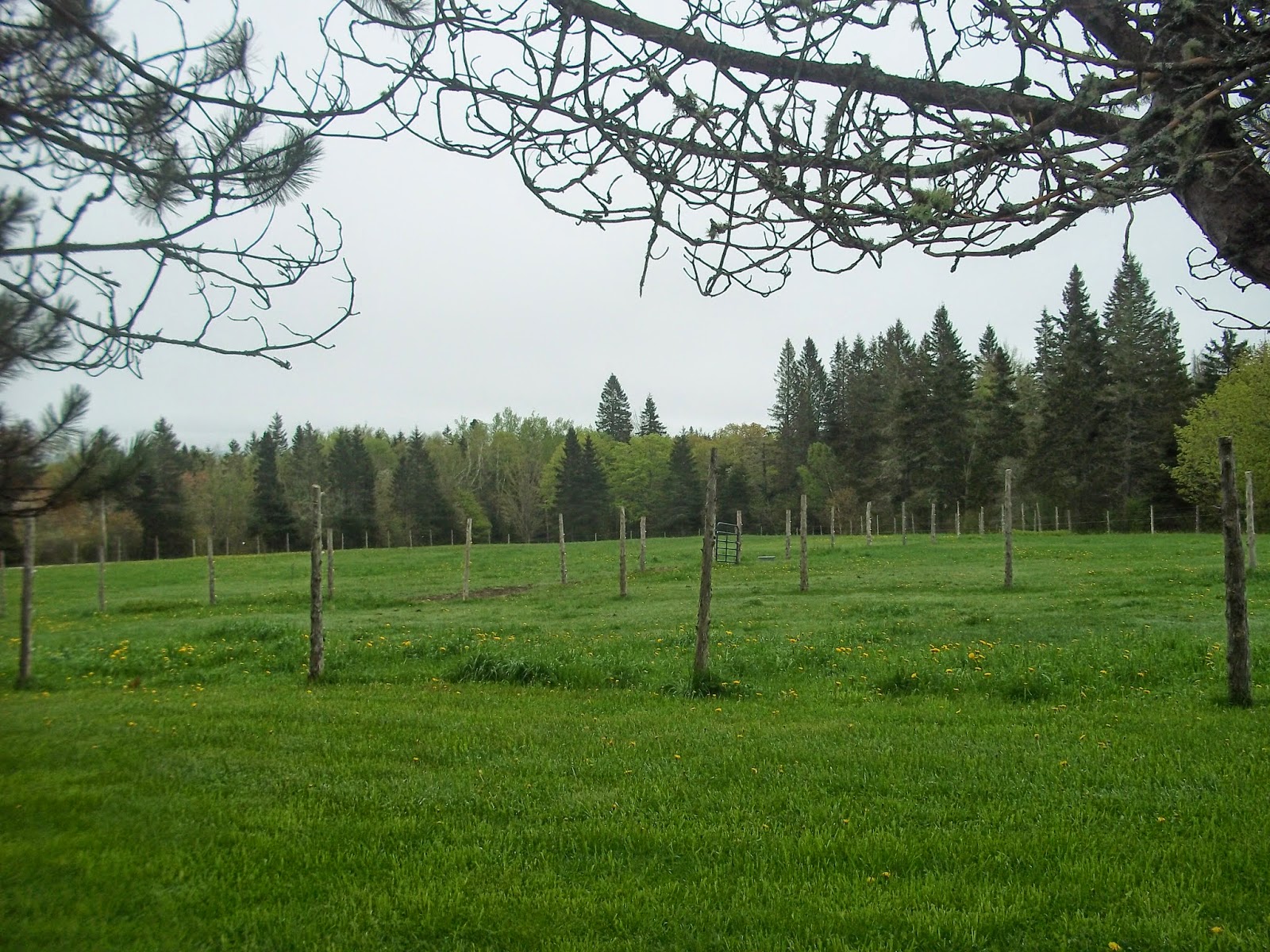 This is Spring at the farm. The horses are boB, Johnwayne, and Major.  After the picture I put the boys in the barn outside.  Because of the threat of rain, the morning crew left them inside, but once I got there it was clearing up.  It's hard to explain what working there does for me, but I'm a new person now that I've returned.
Posted by Cheri Walton at 5:23 PM No comments: 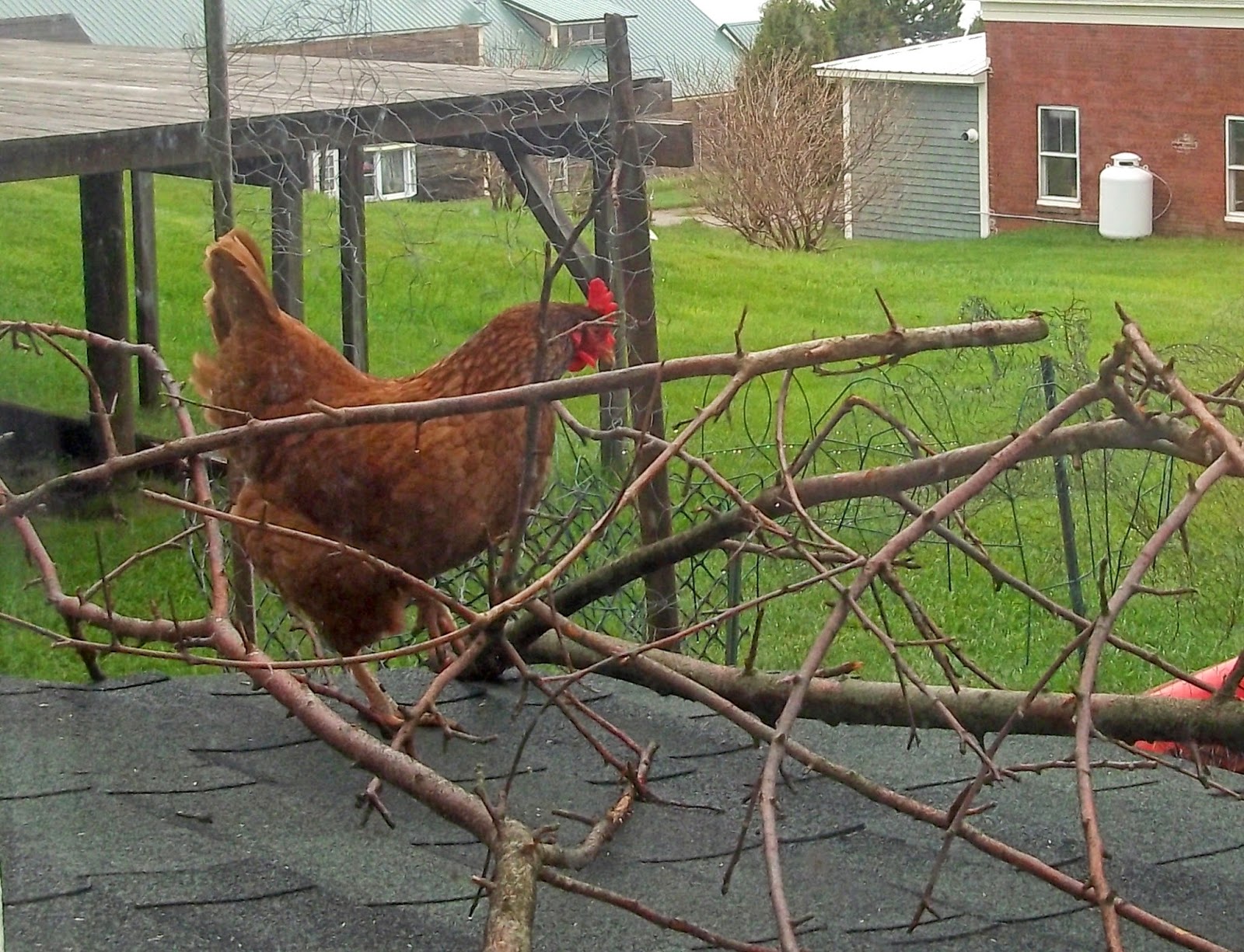 Penny has always been a master at finding her way out of the pen.  One of her tricks is flying up to the roof of the coop, then jumping off over the gate that abuts the house. I thought I had thwarted her attempts by piling branches on the roof to keep her from landing there.  I think this picture I took from the window shoes how effective my strategy was.
Posted by Cheri Walton at 8:02 PM No comments:

Things in the Paper 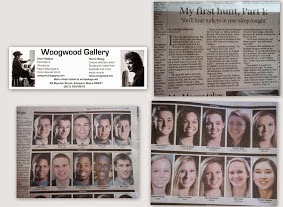 Several times I have copied things from the paper to put on this blog and haven't had time to do it. Now I'm biting the bullet and actually posting them as a collage......which means a lot of frustration and irritation since Windows 7 has devised a mystifying method of doing that.  Every time I do it, it takes me about ten minutes to figure it out.  For some reason my "blog this" choice on Picasa has decided not to work and I don't know what went wrong.

In any case, the first picture is the ad that will be in the forthcoming edition of the Quoddy Tides."  The road to its publication has been a rough one for me.  Adding my work to Pierre's gallery was something I agreed to do a year ago, but we didn't get around to it until now.  The idea of putting me in the ad was something I hadn't anticipated, but I went along with it.  "Going along" with things is something that almost always gets me into trouble. I almost always agree to any suggestion, as the path of least resistance.  Promises that I wouldn't have any part in the enterprise made me feel confident enough.

Time passes.  I find out that my picture is going to be included in the ad.  I am skeptical, but I take the path of least resistance and meet with Pierre and the person who sets up the ads at the newspaper office.  It's not long before I see that things are getting out of control.  The ad gets bigger to accommodate both of us, wording is discussed and argued about, I protest for awhile, and then sit back to watch the ball roll down the hill.  The final ad is an embarrassment to me (as one who detests self-promotion).  Once I am out of the office, my objections rise to the top and crystallize..  After a tremendous struggle I decide to back out.  I screw up my courage and uncharacteristically make a move to assert myself.  I email Pierre and Robin (the one who made the ad), and tell them both I don't want to be included.  Pierre accepts my decision without argument.  Robin, who is coming to take my picture for the ad, doesn't get the email and shows up at my door with camera in hand.  I tell her I have changed my mind.  She pushes me to have the picture taken "just in case."  I acquiesce, of course, with my characteristic reluctance to say no, but tell her my decision stands.  She makes up the ad anyway and sends it to me.  I reply that I love it, which I do.  She takes this as an approval to put the ad in the paper.  THE END.

The second picture is an article I read written by a woman whose column I greatly admire.  She is an outdoor person and writes about places to hike in the area.  It is her relationship with her dog that I so enjoy.  My bubble burst when I saw this article about her hunting turkeys.  Sorry Aislinn.

The third group of pictures shows the athletic teams from local high schools.  Whenever I see pictures like this in the sports section, I am amazed that the school team members look almost indistinguishable from one another.  I've seen this over and over and contemplate the "sameness" of youth.  They strive to be different, but it is not individuality they look for, especially the girls.  They are as like one another as siblings, same long straight hair, same jeans too tight and bare midriffs, same foul language spewing from their mouths......different from the generation of their parents but certainly not from their contemporaries.  When I first noticed this, I found it amusing........until I thought about my own teenage years.  We all looked alike too, with our puffy teased hair and mini-skirts, our talk of how to "get" boys.

Well, these are the random thoughts that run through my head as I peruse the Bangor Daily News........not the only thoughts, but more benign than the ones inspired by politics and crime (same thing?).  So now I will be famous in Eastport, sort of like Thoreau travelling widely in Concord............ except the only readers of my musings are the few who read my blog.
Posted by Cheri Walton at 1:13 PM 1 comment: 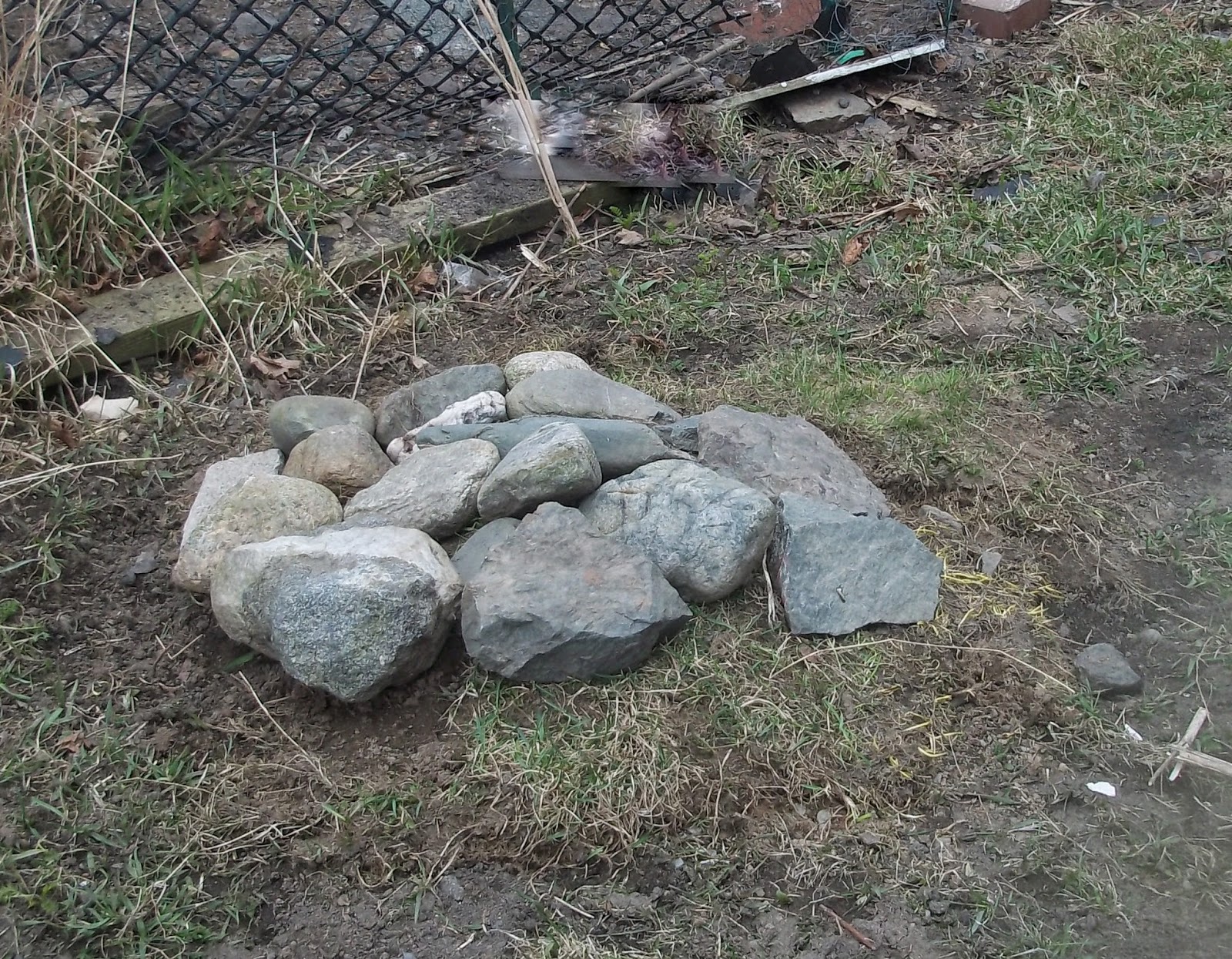 Sooner or later chickens die (as do we all) and I have see my share of them.  This one happened right before my eyes......a natural death, though, which is much easier to take than the violence of the past.  I let the girls out the other morning and all seemed fine.  Then I heard a flapping of wings, turned around, and saw Henny flip over onto her back and die.  It must have been a heart attack, it was so sudden, and if there was any pain it was certainly brief.

In the past I have tried to minimize my involvement with death by treating the resulting body as a piece of trash.  This time was very different.  I decided to bury Henny. I considered putting her in a box, which turned out to be too small, and then a plastic bag.  By the time I had finished tearfully digging the hole outside the chicken pen, though, I had decided to bury her as I myself would like to be buried.  I placed her carefully in the hole, in the fetal position, and covered her with dirt.  Then I carried rocks from my garden to cover the grave, both to mark it and to protect it from animals.  I was uncharacteristically comforted by the act of dealing with her body myself.

This makes me wonder if I might consider bringing Lytton's ashes home at some point in the near future.  So far the idea of seeing him reduced to a pile of ashes has brought me to tears.  Even now, as I think of it, I feel them filling my eyes, tensing my throat painfully.  So I am obviously not ready yet, but I feel I have taken a big step.