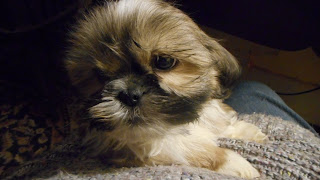 Here is my new baby, Elliot.  After Patrick had been gone a few days I started looking for a new dog.  My first choice was to find a rescue, but the process was too complicated.  I needed immediate action, and rescue places demand too much red tape and money.  I understand and applaud their thoroughness, but I always want, and need, immediate gratification.  After filling out four or five long applications and spending hours on the phone I looked in the newspaper and saw this ad for Shitzu puppies. A few phone calls and six hundred and fifty dollars later I made arrangements to meet the breeder in Ellsworth and pick up my 8 week old puppy.  The same day two of the rescue places I had talked with sent me emails that I was approved.  Of course it was too late, and I was "stuck" with this little bundle of energy.

One of my problems with getting a puppy was the fear of dying before he did.  I am old enough that chances are good Elliot will outlive me.  I had to put that out of my mind, promising to live well into my eighties.   Meanwhile I am dealing with a dog and a cat who are far less appreciative of the new arrival.  Willy would kill him if he could get at him, I think.  I have introduced them, and Willy stares at Elliot with murder on his mind.  His body is rigid, and eventually he starts to shake.  As soon as any movement happens, he lunges at Elliot, whereupon I snatch him away. Elliot is completely unaware of the situation and wants to play.  All I can do is hope that the situation resolves itself.  Willy was okay with Patrick, but part of that, I think, was that Patrick was here first.  Right now Willy's habit of spending his days upstairs is an advantage.  Elliot is confined to the dining room where I spend most of my time when I'm downstairs, so for now things are running fairly well.  Leah was a no-show for a couple of days, but now she understands that Elliot is no threat and simply ignores him.

So this is my life as I wait for the upheaval of moving.  I don't know how soon that will be, but an opening is coming up soon....a one-bedroom place in the senior citizen building.  When a two bedroom becomes available, I'll move into that.  Timing is important in that the house I live in now failed to pass the requirements for rental assistance this year, as I knew would happen.  I have to move somewhere within a few months.  My life is often in a state of uncertainty and these  things do not cause me any anxiety.  Something will happen.  One is either alive or dead, and I am alive.  I will be somewhere.
Posted by Cheri Walton at 1:43 PM 3 comments: