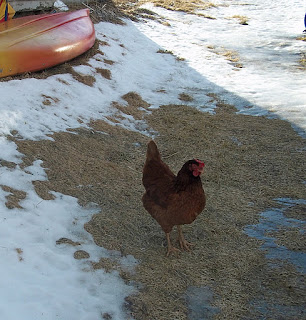 It is absolutely impossible to keep this chicken in the pen. Here she is checking out the neighborhood. When I saw her through the window, I went outside and asked her what she was doing. She ran toward me and then followed me back to the gate, dutifully going into the pen. I fear for her life. The world is not safe for a loose chicken. Two days ago I spent about an hour in the freezing cold trying to devise yet another escape-proof pen. So far it's been working, but I have a feeling it's only a matter of time. 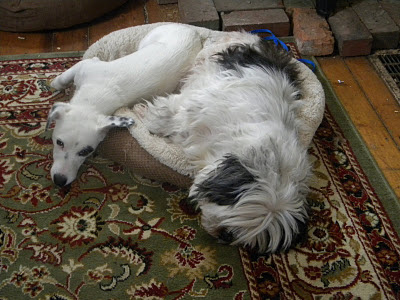 One "Last" Name and Winter Birds 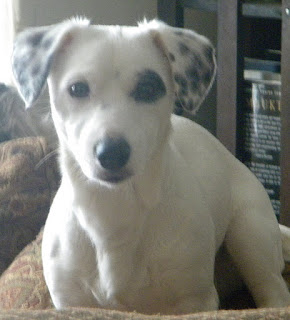 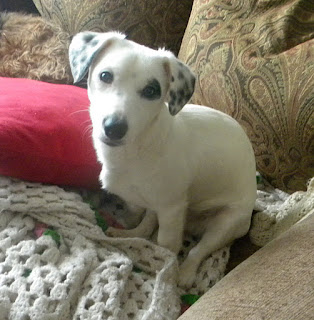 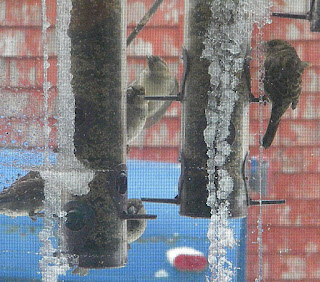 Once again I have renamed my new puppy and I think this is the last time. I settled on William....I thought an English name would be appropriate because of his heritage. I kept trying different ones, looking at him at the same time. That was the problem with the others...they were good names but somehow didn't fit him. Finally I felt connected to him when I called him William or Willie. Another clue was that I didn't constantly forget what I had named him....a good sign. Since then I have used that name and it still fits. I wanted to take a photo of him with his new name....the beginning of our relationship with him as himself.

There is a blizzard today and my bird feeders were empty, so I threw open the window and hauled them inside. The birds were waiting impatiently on the roof next door. A couple of them flew up to the open window so close I worried they would come right through it. I know that I take pictures every year of birds at the feeders that look remarkably the same, but I can't resist. The ice in this picture is on the window, not the feeders, and the snow is invisible, but at least the camera didn't focus on the screen. I got my "good" camera out and was surprised that I remembered how to use it. Apparently the information I studied when I first got the camera sunk in while I wasn't looking. My usual camera couldn't get the birds.

Slowly I am getting used to the idea that Lytton is gone in that I don't think about him every minute. Therefore I don't cry like I did, though tears still well up when I do think of him. Despite Patrick, despite Willie, he will always be my best boy.

Day 2 of the Painting 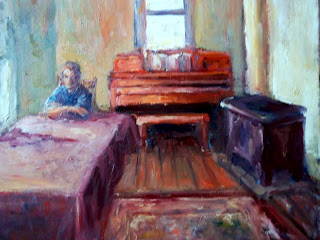 The color in the picture is off, and so are the values, but this picture is a decent representation of the painting I started yesterday. The walls are much darker in reality for one thing. I don't think I ruined it, despite my fears, but since I didn't accomplish what I wanted, there is no reason for having painted this. I don't really know what I wanted, either. Anyway, this is my dining room, but I left out all the plants and pictures on the wall. Why?one might ask......that is just as mysterious as the existence of the painting in the first place. Well, I followed my instincts.......and ended up with nothing. 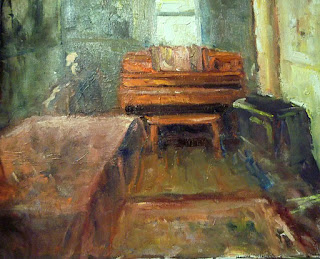 I haven't painted in quite awhile and decided to try this today. If I were a different artist, I could leave it alone. I would see it in an art magazine and love it. But this is just a start. I will take away its spontaneity and turn it into one of my usual competent paintings...........but this is me now, sitting at the table in my dining room, somber and surrounded by the trappings of my life, my red piano an attempt to brighten my shoddy surroundings, with minimal success. It is exactly as it is, without its mask. 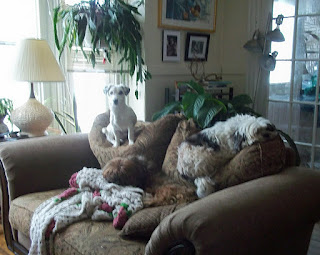 Now after two days there is a kind of tentative truce between the three dogs. Mainly Veni (changed spelling) has learned to leave Patrick alone. He has settled down somewhat, too, and seems to be learning how things work around here. When I went into the living room to take this picture he was sleeping with the others but sprang to attention as soon as he saw me. He stayed put, though, and lay back down when I left.

Toni came over this morning and met him. She fell in love with him immediately, and loved his name. This helped me to settle down on both counts. On our walk this morning I had an attack of regret and gave some thought to returning him to his former owner. He is so different from all my other dogs. He's almost the perfect example of dogs I have always disliked.....tiny, short-haired, pointy nosed, hyperactive. Well, it is time for me to move on, give up my prejudices and accept him for what he is..which is not Lytton.

I think I have settled on a name at last, though that could change at any moment. Last night David suggested Winston Churchill. I thought that was a great name, but again I could never remember it. A lot of the time I called him Vincent instead, stuttering 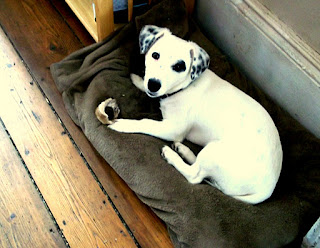 out a combination of the two. I liked Vincent after Vincent Van Gogh, but Then I started calling him Vinny, which somehow brought to mind the one thing I remember from Latin: Veni, Vidi, Vinci......I came, I saw, I conquered. Since that seems to be his attitude, it seemed appropriate. His nickname will still be Vinny, with a slight change of pronunciation but his real name will be Venivedivici.

Last night he slept in the crook of my arm all night, much to the dismay of Patrick and Benny. Patrick let him have it this afternoon, though.......a really vicious attack. I had to haul him off. Poor vinny was absolutely petrified for the rest of the afternoon. His whole body was shaking. By suppertime, though, he was back at it, tormenting Patrick. who merely snarled to remind him who was boss. At that point Vinny scampered good-naturedly away to see what else there was to do. He is almost never still. He has boundless energy. He's different from the other dogs I've had and i'm glad. He's a whole new eperience. 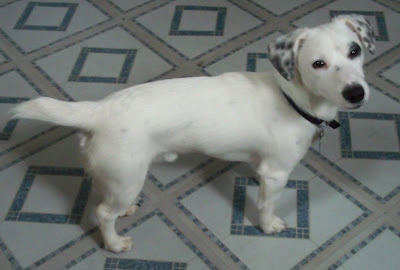 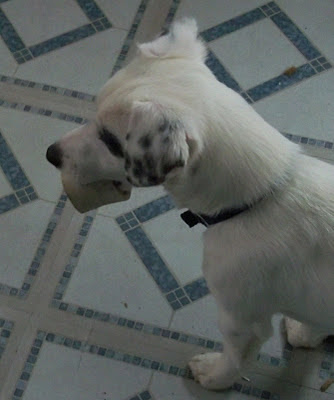 I can't say too much about Dandy yet. He arrived last night.........the antithesis of all the dogs I've had, particularly Lytton. I wanted no chance for comparison. I want him to be himself, and only himself. He's a Jack Russell Terrier, smaller than the other dogs, but certainly a ball of energy. In the bottom picture he has a bone left over from Toni's dogs, but toys are hard to find in this house. I trashed every one I had so as not to think of Lytton. Dandy will have his own.

So far Patrick and Benny are totally miffed at the new development. They are barely civil, but trying to be polite to the unwelcome guest who showed up unexpectedly. 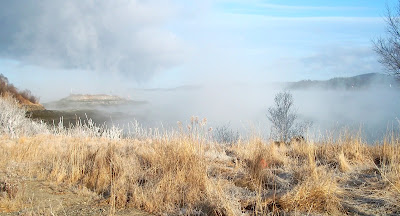 I haven't been able to look at my blog since I posted the last picture of Lytton. It has been an agonizing week that threatens to continue indefinitely. I know it won't. We all get through mourning to some extent, with the shreds of old losses still clinging to the new when they arrive. I am mourning now every kitten I lost as a child, every cat we had as I was growing up. McGaffney, Monique, her kittens, Snafu, Tafu and Fubar. Samantha, Mickey, Sylvia, Ceasar, Ashley, Sam, Stanley, Claudie....................monkies Chico, Cindy, Fred, Amy, and Charles. Then there came a string of cats after I left home, Lenny, Casey, Bwana, Buddy, Patrick, Hamlet, Emma. There were horses, too: BJ, Gideon, Cameo, Darby, and Alise. Then the first dog, Molly, then Mack and Beau, Natasha, Bandit..........my baby Ben Joe, then Pebbles and Happy, then Lytton, Benny, and Patrick. I carry them like a bucket of tears that keeps getting heavier and heavier. 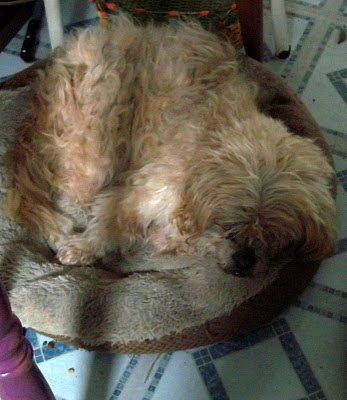 I had to let him go.