At the drugstore today I saw these dog beds on sale for half price. Patrick, Lytton, and Benny have used their old beds for a long time and I decided they deserved a change. Obviously they knew what they were for and adapted immediately.

This is what we had for Christmas dinner. It's a very complicated and time-consuming recipe made by removing the skin of a whole chicken in one piece. The meat is removed from the bone and processed with other ingredients into a delicious concoction 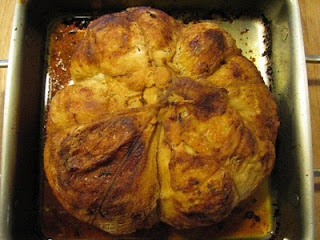 . That is then put back in the skin and molded into a melon shape. It's wrapped in cheesecloth and tied, then baked in the oven.

David has no qualms about diving into the creation of a culinary masterpiece when the occasion merits it, and this was certainly an impressive and wonderfully special treat. The supporting accompaniments were provided by Thom, with a few contributions from me. It was a wonderful meal and a wonderful day.

I am so lucky to be included in such a production of pure celebration. All worries and problems and unpleasantness, big and small, are suspended. Nothing matters except the taste and texture of the feast, the good feeling and camaraderie of the group, the enjoyment of exactly that unfettered moment that we allow nothing to spoil. If we ever lose the ability to give ourselves that gift, we certainly will have lost what makes us singularly human.

At least that's my story and I'm sticking to it.

Christmas in the Coop

The girls check out their Christmas present.....a fresh bale of hay. At first they were afraid to step in it, so I had to drive them off the ladder. They are accustomed to wood shavings and I suppose the hay looked like very untrustworthy footing. Once they got into it, though, they realized that not only was it nice and soft, but it made a good snack as well.

Though it would not be my favorite way to spend Christmas morning, cleaning out the chicken coop was a rewarding job. Though they didn't show much gratitude, I had that solitary pleasure of being able to give without thanks. Animals are so good at accepting gifts as if they were only their due.

Crib for His Bed 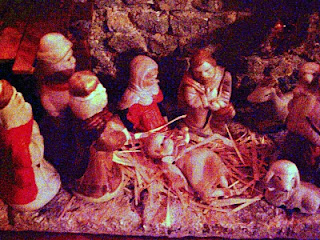 paper and made a bed for my Jesus stand-in.

The picture sucks because I had to go back to my old camera. The computer has decided not to recognize the new one.

Posted by Cheri Walton at 4:42 PM No comments: 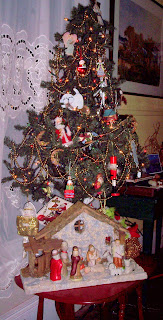 I wasn't going to bother with my Christmas Tree this year, but changed my mind. I spent almost all day doing this, feeling much more nostalgic than I might have thought. Most of my decorations were bought all at once at Main Street Discount a few years ago. I have lost all the traditional stuff we had as the kids were growing up....it was stolen by the woman who took care of my mother before she went into the nursing home.

I do have a few things, though that I feel strongly about. Thelma gave me a few ornaments to remind me of her. She loved Christmas and always had three or four trees, each decorated in a different theme. I thought of her as I put the ornaments on my little tree and felt sad, but glad I had them. My paper mache reindeer is a reminder of Alice, who lent me hers as a model so I could make one like it. Also from her I have a little stuffed moose she gave me one year. Sydney made some cards that I use as decorations, and Sherillee gave me a homemade ornament.Toni gave me the angel for the top of the tree, Jesse gave me the grinch. I still have the stockings that Mike and I had as children growing up, but I left them in the box.......mice had long since eaten the toes out of them. I like to think of them making nests out of the material.

My nativity scene is a strange (for me) nod to the religious origins of Christmas. I used to have the one I got from my maternal grandmother the year I was born, but that was stolen, too. I bought these figurines at a junk shop a few years ago, and the stable at the thrift shop a couple of years ago. Significantly perhaps, the group of figures was missing the baby Jesus and someone had replaced it with a tacky plastic facsimile. Last year I used it, but today I decided to correct the problem. I found one of my mother's old porcelain dolls that sort of went with the rest of the family, if somewhat out of scale (He is the most important one after all). The doll is a girl and was wearing a frilly dress with lace on it, probably made by my mother. I took the dress off and wrapped it around the baby backwards, in a more macho style befitting a boy. So far I have not figured out a bed for it, so I laid the doll unceremoniously on the floor in front of the audience of parents, wise men, a shepherd, some sheep and a donkey.

I like the Christmas story and each year have hope that I can give up enough of my logical way of thinking to believe in it. 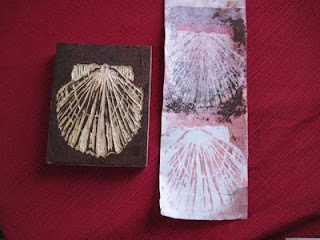 Here's the newest shell block and one of its incarnations.........

Posted by Cheri Walton at 12:41 PM No comments: 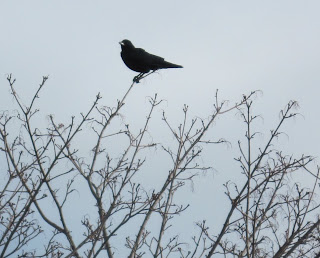 When the dogs and I headed down Clark St this morning I saw a crow sitting in the small tree at the edge of the cliff. He was making a lot of noise, though I never did see what he was talking about. As I got closer, I saw there were more crows nearby, and eventually it seemed like the sky was full of them. What a sight it was. The opportunity to see flight at such close range is rare, and I stood watching them for quite awhile. It looked absolutely effortless, yet their movements were so fluid and choreographed it looked as if they had been long practicing a particular ballet in order to perfect it.

When I went back after getting the camera, the sight was not nearly as spectacular. Most of the birds were gone, replaced by as many seagulls on and around their customary spot on Clark's Ledge. They are beautiful and serene as they bob in the waves around the small piece of rock that is still protruding from the water at high tide. The sentinel crow was still there, though, so I snapped his picture. He flew off as I inched closer and closer to get a better shot.

I can't imagine how wild birds survive the cold......I wonder if they live in any kind of comfort, or if suffering is simply the fate they accept as "life." Finding shelter and food and safety is all that their lives are about. They can't even appreciate how neautiful they are in the eyes of us humans. What do they care? They are busy staying alive, not even able to wonder why.

Posted by Cheri Walton at 5:08 PM No comments:

More from the Mad Printmaker 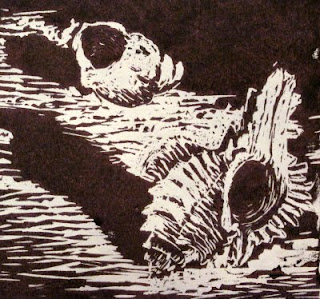 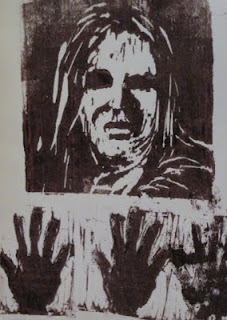 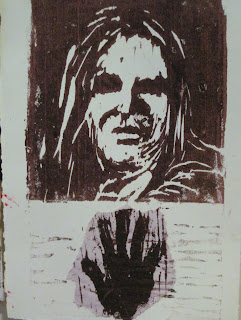 Necessity is the mother of invention, so the two bottom prints are the 2nd and 3rd version of a failed first try. It's such fun to make something out of a mistake........and have the result be better than the original idea. I'm quite enamoured of both of these. The first one, well, it's sea shells..........

Posted by Cheri Walton at 4:02 PM No comments: 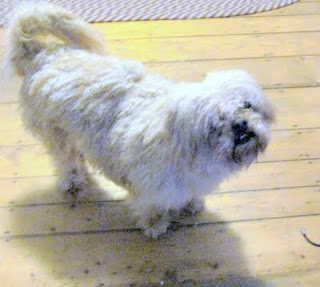 It's hard to see in the picture, but Lytton went out for only about a minute and came back looking like a snow man, or snow dog I suppose. Patrick was also covered with snow, but he shook himself off before I could get the camera. Yesterday I floundered around in the dark to install the heater for the chickens' water, and checked this morning to make sure the coop hadn't burned down (it hadn't). I also left the gates to their yard open, having learned last year that gates freeze closed and then are almost impossible to open. I parked my car in Diana's driveway because a combination of wind off the water and the way the town plow blade angles snow doesn't accumulate there nearly as much as around the corner. 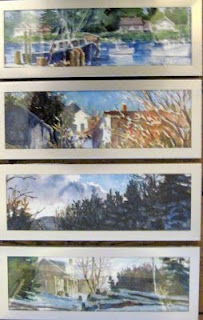 Lisa is having a show of small works at her gallery Friday in order to grab some Christmas shoppers. I didn't really have anything small (cheap) but I went through all the watercolors I had stashed in my portfolio and cut them to fit the frames I found at the dollar store about a month ago. Lots of times a piece of a bigger painting looks entirely new. I'm very pleased with these, and if they don't get sold, I'll have a start on next summer. Or I could put them on my own wall.....I like them. 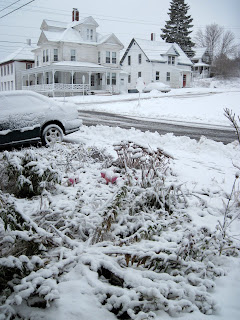 Here's the same place I photographed last night as it looked this morning when I got up. 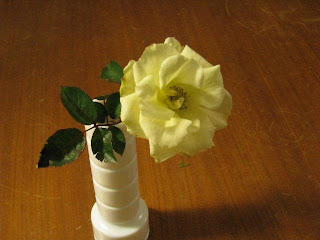 Thom picked this yesterday from the bush in his front yard and we used it as a centerpeice for our dinner. It is like seeing the sun at night or the stars during the day. The seasons have gotten out of sinc somehow when this rose blossoms in the middle of Eastport's first snow. There's no way of knowing when you will see something you have never seen before and probably will never see again. It certainly is a lesson in keeping vigilant, watching what happens in front of you, or you might miss something spectacular

Posted by Cheri Walton at 3:01 PM No comments:

The first snow isn't much at this point, though the weather reporters are all excited and predicting as much as seven inches. The picture shows the house on the corner opposite me with the fine flakes coming down (thank goodness I learned how to get pictures of falling snow). The dogs weren't happy to go out in it, but it seemed like an expected friend tentatively knocking on the door.

The rest are of my recent woodcut endeavors. I haven't tired of them yet. I took a picture of the block itself this time because they are always at their best before actually being put on paper. 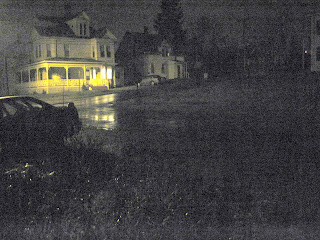 The other one is the printed image using chine colle to represent the "headache" in this re-vamping of an old painting called "Self-Portrait with Bell Curve and Headache." I brought it up to date with a revised image of myself 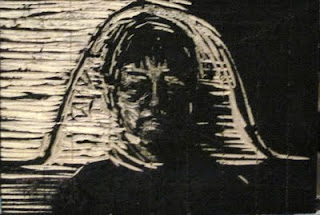 and a new headache representation. I won't bother to explain it, but it does have a meaning to me that was more appropriate then than now.

So what? I am more boring now and not as inspiring to myself as subject matter as I once was. 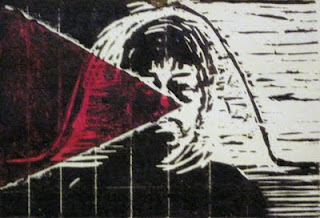 Posted by Cheri Walton at 5:00 PM No comments: 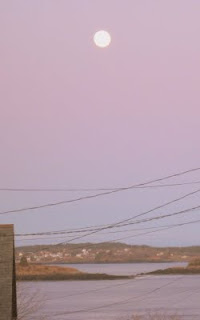 Here's what was in front of me as I drove down Clark St on the way home from Harrington. I parked the car and hurried out with my camera to catch the scene. There's Campobello in the distance, part of Canada, where it is an hour later than where I stand, and the two islands in the foreground are part of Eastport (which is made up of five islands).

When you can see the daily workings of nature, it seems almost insane to think that we as human beings have put a boundary out there in the water and then made all kinds of rules and regulations surrounding it. The landscape is so utterly oblivious..............

Posted by Cheri Walton at 4:11 PM No comments: