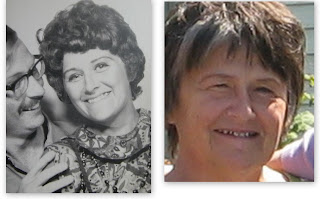 Carrie posted this old picture of me and Phil on facebook. It looks as if it were taken around the time we got married in 1969. The other picture was taken this past Fall. Even though it is a particularly flattering picture of me, the comparison is certainly amazing. Did I ever really have a neck? Was Phil ever so adoring? 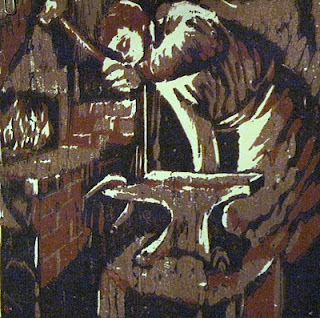 Posted by Cheri Walton at 8:23 PM No comments:

This is my latest woodcut adventure....about an 8x8 reduction print done from a photo in one of my old horse books (which I could not throw away). I'm getting better as I gain experience and I'm pretty happy with this one. I even managed to do two copies of it that both came out well, though slightly different.

Since reduction prints are a one-shot deal I tried to make the block re-usable by cutting off what remained of the image and sanding it smooth again. As with many of these ideas I have, it turned out to be pretty much a failure. First, I wasn't able to find my palm sander. Eventually it surfaced behind the boxed Christmas tree in the closet. Then I couldn't remember how to put the sandpaper on it. I tried everything I could think of, and finally used string to tie the sandpaper in place. As one might imagine, this did not work very well and I had to give up. I tried sanding it by hand, but the cuts are too deep for me to flatten out without the aid of a power tool.

The experience I had is typical of the frustrating efforts I have made to accomplish various things in the last several days. I am ready to go back to my jig-saw puzzle. It is waiting quietly on the table in the living room, about a third done, to help me back off, zone out, and take a little time off from myself.
Posted by Cheri Walton at 7:47 PM No comments: 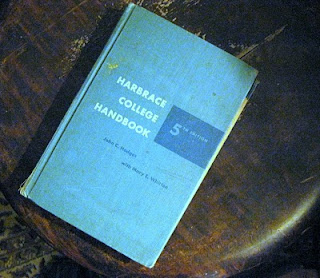 One of the bookcases I had in the hall was collapsing under its load, so I decided to weed out some of the books I have stashed all over the house. It's hard to throw a book away, though I have done it several times when I moved to a new place. Still, so many of them have come with me, even though I knew I would never actually use them again.

This time I promised myself that I would let many of them go. One that I trashed was the Harbrace Handbook. It was the definitive resource for proper grammar, punctuation, and form when I was in college. I feel as if it is a relic from a time when things like unsplit infinitives and gerunds were important, when objects of prepositions were carefully placed inside beautiful sentences. Is the subjunctive voice still taught? Does my old kindergarten workbook "If I Were Going" still have meaning?

Well, as one who loved to diagram sentences, one who believed that words produced thoughts rather than vice-versa, that language creates emotion and belief systems more than actions do, I was very sad to put the Harbrace Hanbook into the garbage bag. I know, though, that I no longer need to know on which side of the paper the inside address of a business letter should be, or if the salutation should say "Dear Sir" or "To Whom it May Concern." I don't need to know the difference between a proper business letter and a personal letter. It doesn't really matter if I say "he didn't" or "he don't." Why not say "between you and I" instead of between you and me"? Was I correct in putting the question mark outside the parentheses, or since the quote comes at the end of the sentence, should the question mark come before?

At one point in my life it would have mattered very much, and I must confess, if I were to be truthful, it still matters very much. But things have changed since I regularly thumbed through the Harbrace Handbook. Language has changed and its significance has changed. Fussing over language has become irrelevant for, in part, its contribution to making class distinctions.

Dare I say that it is not in the best interest of humanity to allow so-called superficialities to sink to the lowest common denominator? I do, but I still tossed the Harbrace Hanbook. We chose our priorities.

Here's Thom's photo and my pastel of it, done on black paper.

Posted by Cheri Walton at 3:45 PM No comments:

What a good time I had with this. It's a pretty good sized charcoal drawing with pastel added. Drawing is certainly one of my greatest pleasures and rocks are one of my favorite subjects. Yesterday I thought all might be lost because of my first attempts to add the color. I had a very hard time finding the right values and was almost ready to give up. But today I went after it again with renewed vigor and I love the finished product. 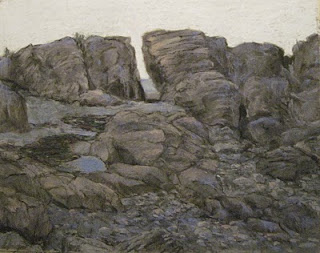 Posted by Cheri Walton at 5:01 PM No comments:

The rambunctious Dylan has reached the age of one. He, David, and Thom have survived his first year, if not entirely unscathed, at least in tact as a family. It is too early to look back on his babyhood fondly, but having weathered the storm the three of them face the future with smiles on their faces and love in their hearts.

I was the guest at the party where Dylan enthusiastically ate shrimp by candlelight and opened his presents. We celebrants also had shrimp (scampi) and drank a champagne toast to the guest of honor. How wonderful to enjoy life as we do, in small ways that become big because we make them big, important because we choose to see them that way, happy because we look for things to make us happy. Happy birthday, little dog.