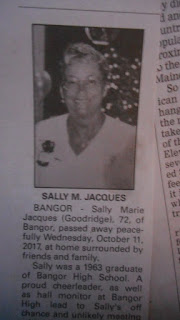 This is Sally, my best friend for most of my childhood.  We met when we were both entering third grade.  My family had just moved to Bangor and somehow Sally was given the task of showing me the way to my new school.  Her house was in sight of mine, and we became inseparable in short order.  In those days children were not supervised the way they are today.  We were turned out in the morning and left to our own devices.  Our days were full of fantasy.  We reinvented ourselves daily as we roamed the neighborhood as cowgirls, or mothers to our dolls, wives to our cowboy idols.  We had a stable full of stick horses, a saloon with a stage in Sally's garage where we put on shows.  We sang and danced, played the ukulele.  Our territory was limited only by the distance we could walk or bike.  The stream where they now have white-water canoe races was part of our playground.  We hopped from rock to rock over the rapids as carelessly as if it were a mud puddle.  We explored vacant buildings, built doll houses out of cardboard boxes.  In the evenings the neighborhood kids often played hide and seek, or red rover, or even badminton...in the middle of the street.  Our only rule was to go home when the streetlights came on....or later when the paper mill whistle blew at nine o'clock.

Because our high school divided the students into "college" and "business" sessions, Sally and I were in different sessions and began a slow and eventually complete separation.  As we grew up, our paths went in different directions and we lost touch.  Nevertheless, we shared our childhood in a very profound and lasting way.  It strikes me as impossible that Sally is dead while I go on.  Even though we lost touch, there was always a sense that we were living parallel lives.  I'm sure she felt the same way.........that I was always there in the background as she was in mine.  Her obituary described her life as happy and conventional in the way we thought our lives would be.  It's comforting to me that that was the case.  I can't say that I will miss her because what I have of her is still just as it was.  She's only gone to me in the same way that she was gone when she became a cheerleader, a wife, a mother.  Rather than feeling sad, I feel that I have witnessed a soft passing.  I'll think of it as her last gift to me.
Posted by Cheri Walton at 8:29 PM 1 comment: