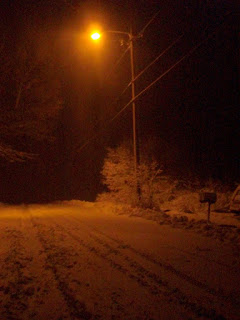 As I always take a picture of my garden in Spring, I try to get the first snow as well.  It has been snowing most of the day, a wet, heavy snow that began as rain in the morning.  After I walked the dogs, I went back out with the camera....there was no way I could take pictures with wild man Willy with me.  He was ecstatic, running so fast he was only a blurr, burying his whole head in the snow, then taking off in another direction.  Patrick was excited, too, and played in a more civilized fashion.  I was afraid I wouldn't be able to stay on my feet with their pulling, but I got back unscathed.

The first picture is just up the street.  First I took it with the flash, hoping for a nice scene with snowflakes in the foreground.  It's snowing too hard for that, though, and the picture is nothing but white dots.  The second picture is of my house as I approach it from the north end.  Both are visible by the grace of fill light editing, so look grainy, but I still like them.  It is very dark out now at five o'clock, but we have turned the corner toward Spring. From now on every day will be longer than the one before. 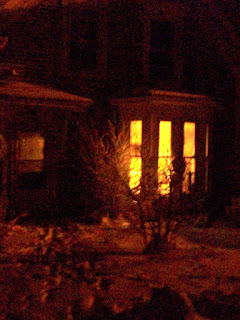 Posted by Cheri Walton at 5:19 PM No comments: 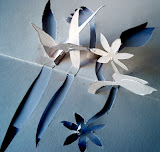 When I arrived for Christmas dinner at David and Thom's there was a very complicated pop-up book on the table that had been sent to them by David's daughter, Martha.  I was enthralled with it and examined it as much as I discreetly could as converstion flowed around me.  This is two views of my attempt to grasp the concept, and I guess I managed the very basic idea.  I'm not sure I will work at this, since I can see that it would involve months of work, if not years, to gain any kind of expertise.

We had a very nice Christmas dinner with Sydney and Richard, who are both in their usual high spirits despite there very serious health problems.  I was very touched as we drank a toast to ourselves before we ate, everyone with there own private thoughts about how lucky we were to be together.  We all have our own families who are flung far and wide, but this has become  our own tradition.  We are a family, too.

Posted by Cheri Walton at 1:04 PM No comments: 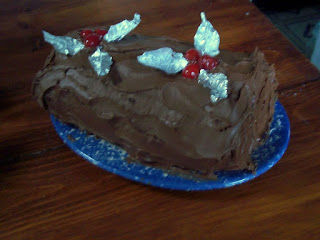 My mother made this chocolate cake filled with whipped cream every Christmas that I can remember.  As children, everyone wanted the end piece because it had the most frosting........now we consider it too rich.  After she lost her faculties either Mike or I would make it for what family was available, and now we each make one in our separate places. Over the phone we compare our successes or failures, depending on how much the cake cracks as we roll it up.  This year mine was almost perfect, and I discovered a secret to keep it together.  I'm not sure I will share it.

Thelma enters the tradition in the form of the oval platter I always put it on.  She made it herself as part of a set of ceramic dishes she designed, molded, painted, and fired herself.  They were sold all over New England in gift shops as symbols of the Maine wild blueberry.

In awhile I will be going to have Christmas dinner with Thom, David, Sydney, and Richard.  It's the traditional group.  I have the feeling it will be the last we all have together, though at this stage of life it's expected, even accepted, that everything ends.  I'm not sad exactly, but it does make one appreciate the present.

Posted by Cheri Walton at 2:13 PM No comments:

My Mother's Only Child 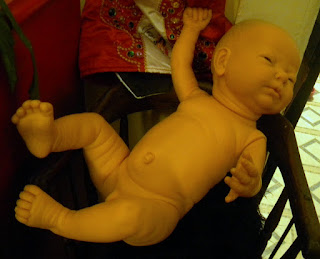 Yesterday I had to clean out the closet in my bedroom so that the wall and ceiling could be repaired.  In the far end of it were three garbage bags I hadn't seen since I moved in.  I knew they were full of my stuffed animals, which had always been displayed somewhere in my various habitats until I moved here.  I could have just moved the unopened bags into the other room, but masochist that I am, I decided to take a look at them.  The expected nostalgia poured over me as I picked up each one, remembering where I got it, when, and from whom.  Memories flew into my consciousness that hadn't surfaced for years.

I was surprised by this doll, though, which I didn't remember having.  It was my mother's, and being hidden with my own toys, escaped the mass slaughter of the rest of her doll collection.  I remember it only vaguely, connected to an incident at the nursing home where she died.  During one of my visits, she told me that her roommate had stolen her baby.  Her guardian and I had been careful to include the doll in the possessions we took with her when she was admitted, so I went to check her room.  The doll was there, as it had been when she still lived at home, dressed in its Christening gown and carefully positioned on her pillow.  No matter how I tried to convince her that it was there, she wouldn't believe me.  Neither would she go to her room to look for herself.  Typical of her, both before and after senility, the truth had no bearing on her reality.  I see that the doll is anatomically correct, a boy. True to form, to her it was a girl and she always dressed it in girl's clothing.

I don't remember if she believed this was a real baby or not.  She did, however, lament that she had never had any other children, which made the abduction of this one particularly cruel.  I don't know what I will do with it now that I have found this doll.  Certainly I can't simply throw away my mother's only child. 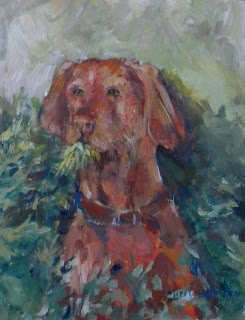 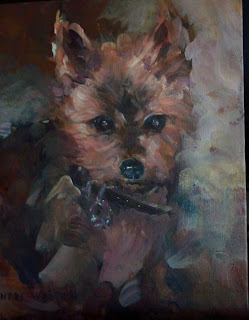 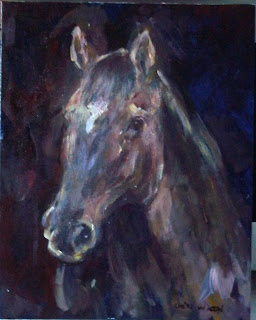 These are some of the last pet portraits I did for the horse shelter.  I didn't get to photograph them all, but most are here.  I feel good for having done them, for making such a concrete contribution.

Yesterday I began a post that somehow disappeared.........there is a lot about Blogger that is different in this new version, and I'm having trouble with it.  The gist of it was, though, that I re-read the first book I had made of this blog.  I got it out because I had decided that I was ready to look at the pictures of Lytton.  It has been all this time that I haven't even been able to, but it suddenly became what I wanted to do.  I can't really describe the experience.........I was almost detached.  Probably I had to be in order to do it, but I think it's the first step in my being able to accept that he's gone.  I certainly hope so.  The year since he died has been almost consumed by my attempts to somehow deal with the loss.

The other thing that came out of my reading the book was a desire to put more into my blog.  I used to write more about many more things than I do now.  I blame that on my camera, in that I wanted a picture to go with every post.  That meant that if I didn't have a picture, I didn't write.  I ended up doing little more than recording my artwork and my comments about it.  I have kept a separate journal, where I have written about many things I thought were not appropriate for Emma to write about.    I had separated from her in my grief........she who was interested in so many things, who found pleasure in the little life she lead.  My new year's resolution is to resurrect her.

Posted by Cheri Walton at 7:51 PM No comments: 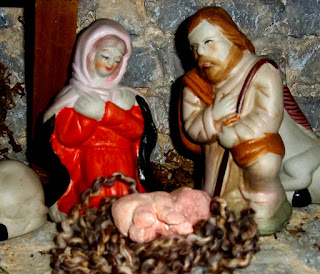 Here is the Jesus I made for the expectant parents under my tree.  He's pretty big, but I didn't check out the mother before I made him.  I may make him some swaddling clothes......

Posted by Cheri Walton at 4:33 PM No comments: 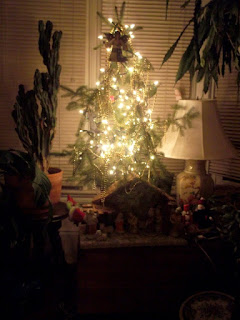 I haven't had a Christmas tree in quite awhile, but this little one was given to me by some new friends, Pierre and Kendall.  They cut it themselves, and it's only about three feet high.  I think it has a bizarre charm, being gangly and sparsely branched.  My decorating is very haphazard, too.  I grabbed what I could easily find in the shed closet.  Most of what I have is too heavy for the tree to support.  The top branch holding my metal angel is bending forward over the creche, probably looking for the baby Jesus, who is conspicuously absent.  I don't know what happened to him, but tomorrow I will make one out of clay. The attendant parents, wise men, and shepherds, and animals need their focal point.

Posted by Cheri Walton at 10:09 PM No comments: