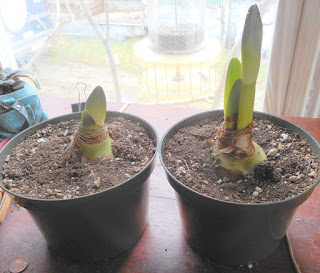 A few weeks ago I posted a picture of these two plants as they started to grow.  They were dormant for so long a less optimistic woman would have given them up for dead.  But now, here they are, six months later.  For awhile I thought they were thinking of blooming NEXT Christmas, but at the rate they are going now, I'm guessing it will be only a month or so.

I am completely unpacked now and settled back into my Eastport home.  I have not so far regretted my decision to stay here.  I have no idea if I have learned my lesson yet......will my desire to return to Bangor come around again?  It won't surprise me if it does.  For now, though, I'm glad I'm here.  I have even contemplated applying for membership in the Eastport Gallery again.  They are taking applications next weekend.  If I can convince myself to remain a member without trying to run things, I think it may be a good idea.  I doubt that I have been blackballed to the point that I will be refused admission.  Most of the people who were there and active while I was a member have left.  The ones who are still there may remember that my style as president was too heavy-handed...."my way or the highway:-)."  I have a reputation there as one who quits when crossed.  This is true.  I do not play well with others.

Perhaps if I take an oath of silence, that I will keep my opinions to myself, I will be accepted.  Either way it is probably a bad idea, come to think of it.  When have I ever been able to keep silent?
Posted by Cheri Walton at 1:03 PM No comments:

Back to Square One

So I was all packed and ready to move to Bangor.  The housing authority called when I was out and told me my application had been accepted and to call back to make an appointment.  Meanwhile, I had decided to stay here in Eastport.  My ambivalence came to a head when we had a nice enough day that I decided to put the chickens back in their coop.  They have been in the basement since the window in the coop broke during a storm and the place filled with snow.  I will refrain from describing the mess I had to clean out. Suffice it to say that I had to shovel wet "mud" for two hours straight.  Then I replaced the window, put down clean bedding, returned the feeder and waterer to their proper places, and waited to see how the girls would react.  I didn't know what to expect, since they have not been in the coop for months.  Well, they were thrilled.  We all celebrated with a bag of Microwave popcorn, and I knew right then that I was not going to Bangor.  I love my life here.  I contacted my landlady, who told me that the house is mine as long as I want it.

Since then I have spent my time unpacking the boxes I had packed.  It has taken me weeks to do it, but things are pretty well organized again.  I took advantage of the situation and rearranged the rooms.  Change is what I crave, so I did it within the context of my newly beloved home. 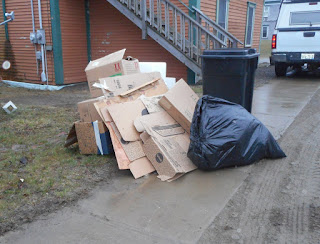 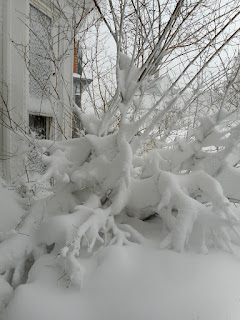 This, too is a post I failed to publish.  It's the one really big snowstorm we had this winter.  That's the lilac tree beside my front door.  We've had snow, but not very much.  It's about gone now, though the weather is still very cold. I'm  hoping  my quarter of a tank of oil will last until it warms up. 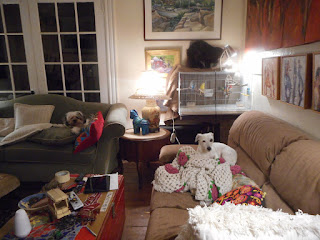 Apparently this is one of the many posts I wasn't able to publish during my absence from Blogging.  I like this picture because all of my animal family rarely are in the same room together.  On the left is Patrick, then on top of the cage is Leah,  The three birds are inside the cage,and Willy is on the couch in from of them.  All that's missing are the chickens.
Posted by Cheri Walton at 3:47 PM No comments: 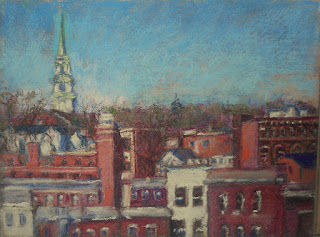 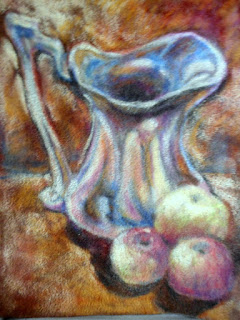 Most of my art supplies are packed, but I still have my pastels close at hand.  Whenever I use them,  I love them and think I will devote myself to them from now on.  Of course I never do.  But this is what I've done over the last three days.  The first one is from a picture of downtown Bangor that was in the newspaper the other day.  I copied it (without permission, of course), and did this small painting from it.  I like it, even though the drawing isn't all that great.  The other painting is done on a piece of craft felt I had bought weeks ago for another purpose.  I had been reading about different grounds for pastel so decided to experiment.  It was fun, but I don't think I'll repeat the exercise.....too soft and unforgiving.

Otherwise life crawls on as I wait for news.  I am in limbo, unable to see where I fit and increasingly ambivalent about the move.  I wait.
Posted by Cheri Walton at 3:34 PM No comments:

I got these bulbs as a Christmas present from my old friend Don in New Mexico.  I thought they were dead for quite awhile, but hope springs eternal.  They finally started to come to life a few weeks ago.  At this rate, they will bloom for next Christmas. 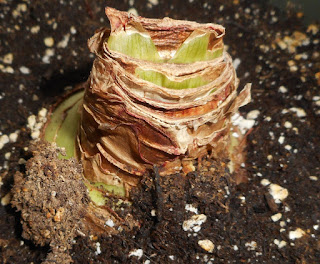 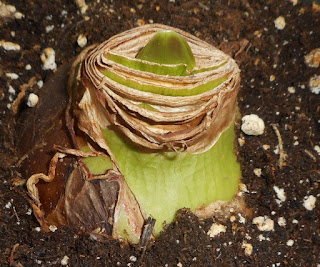