The Sequence, and Weather Report 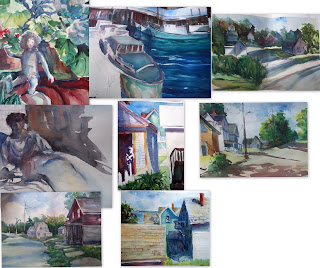 My idea of photographing my progress toward recovering watercolor skill didn't really come off as I hoped. It's too hard to see the differences with such little pictures.  Nevertheless, here it is.  The last one is looking out my bedroom window, and I actually moved from my studio to do it, hoping that some of my troubles had to do with copying photographs or other paintings.  I did manage to do a much better job, and was very encouraged.

Today it is pouring rain outside.  It is cold, damp, and dark in the house.  I wanted to make something wintery for my supper and decided on baked beans.  I don't really like baked beans very much, but I didn't want to go to the store to get different ingredients.  Corned Beef would have been good, or pot roast.  I could have made some bread.  My old favorite Arroz con Cerdo came to mind as well, but all would have required a trip to the market.  This is how I disappoint myself at this stage in my life.  I settle for the easiest path, so the result of most of my efforts is a diminished substitute for what I really wanted.

Well, the beans have soaked and now I must simmer them for an hour before I put them in the oven.  It will be late when they are done.......perhaps around ten o'clock.
Posted by Cheri Walton at 3:26 PM 1 comment:

Patrick looks so adorable with his new haircut that I tried to take his picture.  Not surprisingly, Willy made it impossible, lunging at me, lapping my face, wiggling the camera.  The last picture does at least show Patrick posing in the background.  Behind him is, of course, Benny asleep in his usual downstairs place.  Later he will move upstairs to my bed until suppertime.  I love these dogs, but thoughts of Lytton still invade my consciousness several times a day.  If I catch them in time, I can prevent tears.  Usually I can't.  I cry silently now, at least, so progress is being made, and I can distract myself fairly quickly.  Nothing fills the hole he left, though, and there is no doubt in my mind that I will carry it to the grave.
Posted by Cheri Walton at 12:09 PM No comments:

A Watercolor, At Last 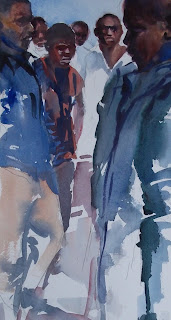 For weeks I have been trying to paint with watercolor, inspired by looking at the ones I did years ago.  I studied my own paintings at great length, but just couldn't do it.  While this is not the subject matter I did before, it does look like a competent watercolor and I am thrilled.  I think I will take pictures of the progression..........it will be interesting to see how they change as I struggle.  Several times along the way I almost gave up, thinking that I had to relegate what I thought of as my expertise to the past.  I kept going back, though, unable to accept that I had lost it.  I have been rewarded and encouraged.
Posted by Cheri Walton at 6:22 PM No comments:

I've been doing many different things, scattering myself around with sculpture, painting, puzzles, crocheting, sewing, housework, reading, working at the shelter........every day passes in a flurry of short bursts of activity.  I guess I feel that the most notable is this series of clay heads I am making out of self-hardening clay.  They are 3-D versions of the Szondi Test heads I painted last winter.  I have done more than just these four, but photographed these just because they were handy. They are a little over two inches, with flat backs in anticipation of being hung up.   After I had done several of them I got bored and modeled a fetus, also using the painting I did for reference.  I'll resume this project, though.

Otherwise the summer has gone by as summers do.  Now the Cosmos that I planted from seed is blooming prettily, always evidence of the onset of Fall.  There have been only a few very hot days, so the whole season had an air of unfulfilled expectation.  There was neither disappointment, nor satisfaction, though, only a mild sense of having missed something that ought to have been there.  Carrie visited a few weeks ago, on her birthday, and our time together was beautifully enjoyable.  How wonderful it is that our relationship has never faltered, never been tumultuous. Since the day she was born she has been nothing but a joy.  Being a parent to both my children has far exceeded any expectations I had when Phil and I decided to have a baby.  The reality that what you are doing is making another human being is slow in coming.....very slow.  I really miss seeing and knowing Jesse as an adult.  He and I had a considerable amount of time together by ourselves, after both Phil and Carrie were both gone.  We were very comfortable, moving in separate but somehow compatible worlds that overlapped in pleasant, meaningful ways.  Well, at least that's how I saw it.
Posted by Cheri Walton at 8:29 PM No comments: