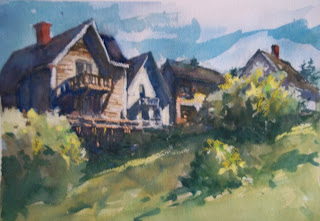 Last week-end I took a couple of pictures from the back yard of the neighbor's house. Yesterday I painted this watercolor at Art Day. I wasn't happy with it, so when I got home I added a little pastel to help brighten it up and give it some dimension. I've lost either my skill or my taste for watercolor unadorned. It looks flat and the values aren't wide enough. Even as I look around at the watercolors I've done and loved, I feel the urge to just touch it here and there with some pastel.

My house is on the far right, behind the bush. Diana's is the white one in the middle.

Posted by Cheri Walton at 9:56 AM No comments: 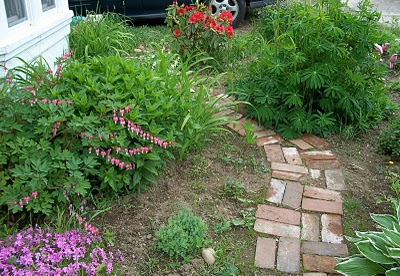 It seems impossible that the garden could look like this so early in the year, but here it is. I'm worried that by the middle of June it will be finished, or at least my ambition will be finished. In years past I have lost my enthusiasm by July, and by August the garden will be a mass of weeds. Nevertheless, I certainly do enjoy it now............

Day at the Farm 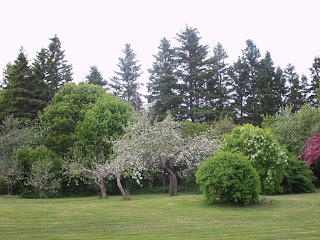 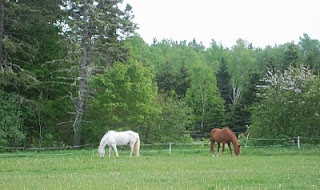 Could anything be more idyllic?

Posted by Cheri Walton at 6:59 PM No comments: 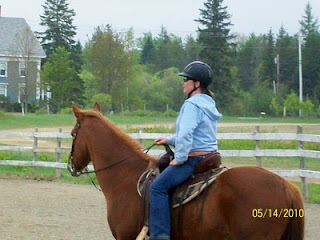 I got this picture off facebook. It shows Andrea, the owner of the horse rescue farm, riding in Major in a benefit event in Lee. Major is one of the horses I take care of.

Posted by Cheri Walton at 11:53 AM No comments: 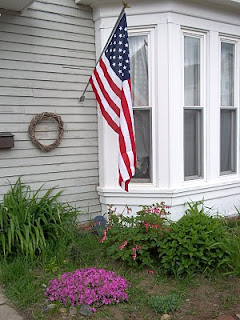 I'm not the most patriotic person in the world, but I like the looks of an American flag hanging on a house..especially in a small town like this. It brings back images like those I remember in "The Music Man" or "Pollyanna." Through an accident of birth I am American, and though I wish my ancestors had stayed in Canada, where I feel I belong, there's nothing I can do about it. Now Canada will not have me, and I can't say that I blame them. The flag is more a decoration to me than a symbol of my allegiance. Although Obama's election briefly made me hopeful that being American could be something to be proud of, I realize he is only one man without enough power. Money, personal wealth, power, drives everything. Selfishness, obnoxiousness, and diregard for others are national characteristics.

Anyway.......... My garden, ahead of the season, begs for a flag to complete the picture of what might be, or used to be, or could be, and lives only in dreams. When I took down the old, tattered one, I left it in a pile on the front walk while I put up the new one. It crossed my mind that someone who values that piece of cloth might be offended. Once I got the new one installed and stood back to admire it, I saw I had hung it upside down. I had to redo the whole job, not an easy feat. I've always found it to be bizarre that a ritual surrounds the disposal of the flag, that dessecration of the flag is an unspeakable act. It would be as if shooting a picture of the president is the same as shooting the man himself. I never could understand the point, or even the existence of, team loyalty no matter what. It can be conjured up for no reason at all by rousing cheers and the waving of banners.

Well, there are a lot of ways to feel and act. The way I feel has no bearing on anything as I sit here and write, having folded the old flag and placed it somewhat ceremoniously in the trash can. Contrary to the way I felt before I had lived as long as I have, I really believe one way is as good as another. Was I a better person when I was moved to tears every time I heard the "Star Spangled Banner?"

Posted by Cheri Walton at 3:30 PM No comments:

I thought I was ready to give up painting for awhile, but as I was cleaning up the studio (sort of) I thought of something I wanted to try. It was inspired by an article I read in "Drawing" magazine about a guy who used tattoo ink on transparent paper. It said he painted on both sides of the paper. Well, having no tattoo ink and no transparent paper, I had to improvise. After some time rummaging around, I hit apon the idea of paainting on glass. I used gouache, since I have no other paint, and actually it turned out to be the perfect medium. It's opaque, but you can also wipe it off. I used the image I had painted for the feminine mystique show at the gallery and never showed. The painting was much more transparent than I anticipated, though, especially when held up in natural daylight. It looked mostly like a bunch of drips. Then I thought to put it up against a piece of paper and then put another piece of glass over it. Voila! I love it. The first picture shows it over white paper, the second over red paper, and the third over gold (my favorite). The red one looks a lot better than the photo......much less colorful.

So now I have a new toy, especially after I remove all those paintings at the show from their frames so I can use the glass........... 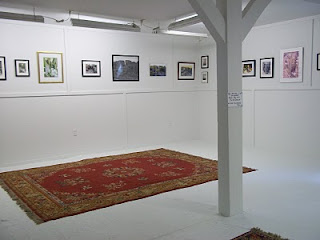 I didn't get any pictures of the reception, but this was taken right after Thom and I hung our show. Later I'll have some that show the party.........We were very happy with the way everything looked, and the opening was well-attended. There are some great comments about it on facebook, which couldn't help but warm our hearts.The show was called "He Saw, She Saw,"which was Thom's idea. David made tags for each work labeled "He Saw" on Thom's and "She Saw" on mine. It was a touch that delighted me quite disproportionately, and I spent more time looking at the cards than the artwork, chuckling anew at each one.

I know there was some buying going on, but I don't know what or how much sold. Thom's photos were pretty popular, I think, and some of my small stuff went, too. I was having a good time socializing, which is quite unlike me in most circumstances. Yet there I was, smiling and chatting and hugging.........It was wonderful to see the whole thing put together. The photos and paintings complimented one another in a way I couldn't have anticipated. Thom and I both felt that the paintings enhanced the photos, and the photos enhanced the paintings. The twenty-four hours before and after the show were spent in self-congratulatory satisfaction. Multiple toasts were drunk to our own success. We loved it. 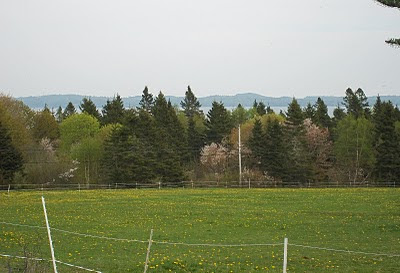 Posted by Cheri Walton at 11:46 AM No comments:

My most recent new endeavor is volunteering at First Light Farm. It's a horse rescue organization quite nearby where I can help take care of and rehabilitate horses that have been saved from slaughter, abandonment, or abuse. Once they have been brought back to health and happiness, they are placed for adoption. The criteria for adoption is fairly rigorous to make sure each one spends the rest of his or her life loved and cared for.

These pictures are of a few of the horses living at the shelter now. The one with the saddle is being adopted by the woman handling her. My project is Fern, the first picture. She was saved from the kill pen after a career as a race horse. I have been grooming her and leading her around, petting her and giving her carrots, to make her comfortable with people. I also feed, water, and clean up. I'm donating my services for a raffle, too, to raise money by selling tickets on a portrait of the winner's horse.

I feel as if a wonderful piece of my life that I thought was gone forever has been restored.

Posted by Cheri Walton at 11:40 AM No comments: 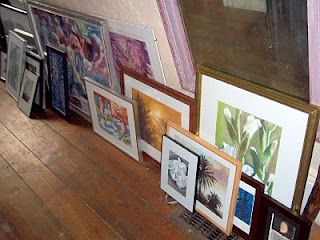 One more day before the long-anticipated opening of Thom's and my show at the Rose Garden. I finished my framing just moments ago and tomorrow we are taking everything to the gallery to hang. This has been a long time in the preparation, but I think we are going to have a really nice and interesting exhibit. The idea is pretty novel, and I think quite a few people plan on coming. I'll certainly take pictures of the gala........... 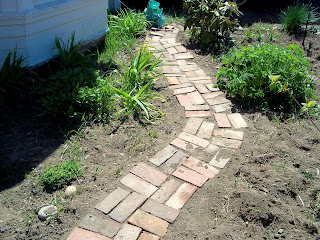 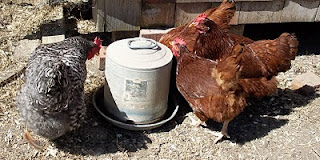 Posted by Cheri Walton at 11:22 AM No comments:

My second (after changing the dog fence) fairly big Spring project was to make a path across the front garden. For one thing, it makes it easier to get to the car from the front door. It also gives me a way to get through the garden without worrying about stepping on some innocent plant. I really like the way it looks, though it needs leveling. I may or may not do that. Below are the girls gulping down water this morning after they had squawked their little lungs out telling me their waterer was dry. I always feel guilty when they run out, and they don't help by chastising me so severely. I've read that chickens dehydrate quite quickly, but they had water when I put them in last night.....come on..........
Posted by Cheri Walton at 11:14 AM 1 comment: