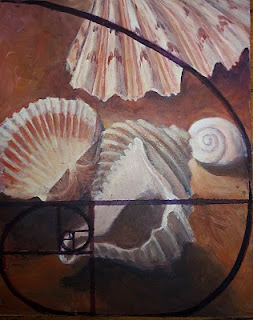 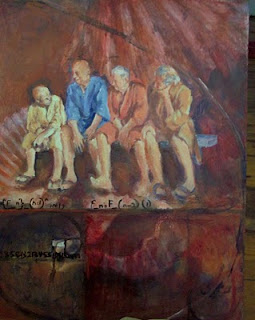 Looking at these now, I sort of wish I had kept the first one, but I didn't. Somehow I didn't like it with only the shells, despite the fact that I spent several days painting them. After I forged ahead with the Fibonacci curve, there was no turning back. When I added the figures I obscured the meaning behind the painting, which is probably just as well, and I still have a satisfactory realistic image. The lower part of the painting doesn't show up in this picture as much as it actually does, but you get the idea. 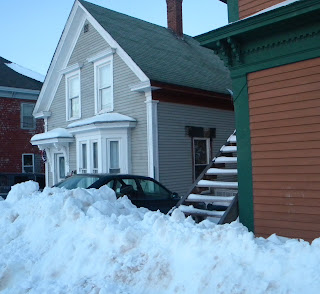 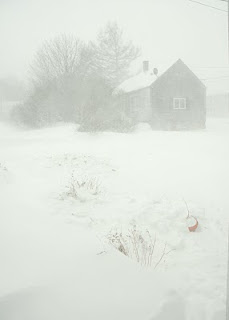 When I went out to check the chickens this morning only three came running to meet me. For a horrible moment I thought I might have closed one of them outside somehow. We have had sub-zero temperatures for several days now and I was afraid she somehow slipped past me, got outside, and froze to death. I climbed inside the coop, which isn't high enough for me to stand up in, and saw her on the floor behind the feed dish, obviously dead for a while since she was frozen to the floor. I picked her up, praying that she wouldn't be so frozen that she would come apart. I had to unstick her head and tail from the floor, but she did remain intact. 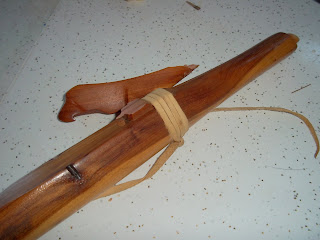 This is my Indian flute, hand made by a craftsman in New Mexico. I've treasured it for many years. I like the fact that it's the only instrument I can play without sheet music in front of me. I was told that you play this just by letting your mind go, let your feelings be reflected naturally in the notes you make. I was totally skeptical, yet I can actually do it. A few days ago I decided to see if the tone of it would be better if I warmed it up, since the house is so cold. I wrapped it in a dish towel and put it on one of the floor registers in the kitchen. I forgot about it until this morning, when I saw the towel in the middle of the floor. The flute was nearby, the carved bird that had been attached to it was broken off, and looking closer I saw that the tail of the bird had been chewed.

As long as I have had dogs, one has to wonder why I didn't think about such an eventuality when I put such a valuable thing made of wood on the floor. If I thought anything, I suppose I thought the towel would protect it, though I really didn't think at all. Luckily the damage doesn't affect the playability of the flute, but its aesthetic quality has certainly been compromised. Whenever something like this happens, as when I have lost contact lenses and hearing aids as well as a multitude of less expensive objects to the exuberance of animals, it reminds me of the value, or lack of value, of the "things" that surround us. Dogs, who don't know or care about the difference between a hand-carved flute and a stick that fell off the nearest tree, show us how to keep our belongings in perspective. 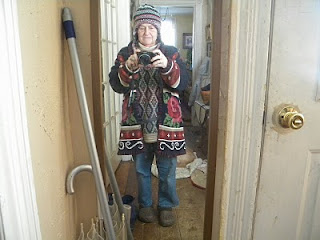 My mother would roll over in her grave if she could see me in this outfit. I saw myself in the mirror as I started upstairs this morning and noticed the array of patterns I was wearing. I thought of all the years I was taught how to properly combine elements of dress and how much it has always influenced what I wore. Little by little I have discarded the rules I adhered to so vigilantly. Now I put on whatever is handy and warm without giving much thought to how I look. Sometimes I believe it is a not-so-unconscious way of rebelling against my mother. I hate to see myself in the kind of outfit she would have approved of, so it is either she or my former self that I try to defy. Whatever........

Playing with My New Toys 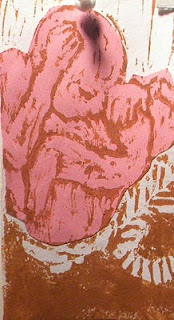 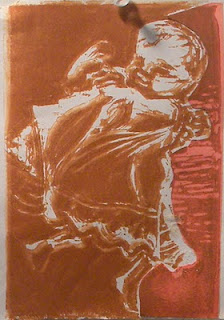 Recently I splurged on a little printing press that works by pressure rather than rolling over the image. It came in the mail the other day. Then today I got some rubbery "easy cut" blocks from another art supply company. With no commitments, I set to work. The press works very well, much to my relief (no pun intended). The top print is made from a woodcut I did a few days ago while I was still fascinated with fetuses. The other one I did on the new block. It is yet another of my mother's dolls. This one was printed twice, hence the messy registration. Like many mistakes, it turned out to be more pleasing to me than the perfect ones. I didn't like the cuts I had made on the right side of the print, so I collaged a piece of paper over the area. That fixed the problem, and added a new dimension to the print. I used chine collee on the other one, too, in order to liven up and otherwise over cut block. I like that one, too.

Posted by Cheri Walton at 5:56 PM No comments: 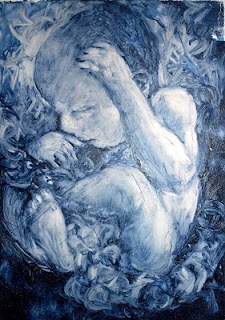 So here is the next piece of work......very quickly done yesterday on a piece of Yupo paper with my subtractive method. It's a direct statement that explains the painting so haltingly squeezed out of my unconscious mind over the last few weeks. What fun............and what comes next? I already know that Fibonacci and I are going for a wild ride...... 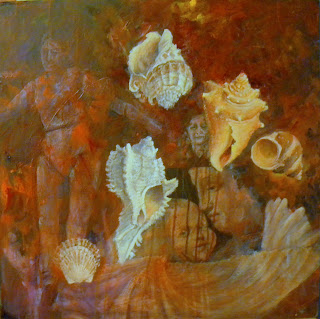 Probably I would have been able to go on and on with this, but at some point it has to be called finished.

I've spent many days working on this. It's certainly derivative of what I used to do in school, but not exactly the same. My approach was the same, though. I put down whatever came into my head without thinking about why, obscuring each layer as I moved on. Usually by the time I am finished, I am able to find some theme, and this is no exception. The process is very absorbing, very interesting, to unlock pieces of information in the unconscious mind and let them float into consciousness without evaluating them. As I worked toward the visual part of the painting, I simply focused on the image I had made. This is another wholly absorbing activity. I spent days just working on the intricacies of the shells, thinking of nothing but their details. You would think I would have memorized them after staring at them for so many hours, but I know I haven't. If I should decide to go back and paint them again, I would see them in even more detail, and what was minuscule would be obvious. There would be more intricacies......