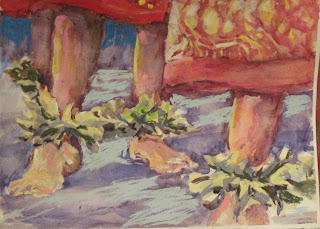 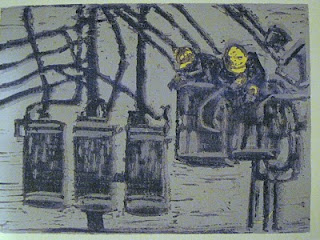 Yesterday I started cutting this block of telephone workers at Sydney's. I cut the image out of the paper when I saw all those wires. It's a reduction print, but with only two colors. I painted the paper first for the gray sky. Then I did the light gray, then the dark. On the last printing I cut out little pieces of yellow for the hats, hoping to make some sense out of the image. I don't know if I did or not, since I know what it is anyway. I like the print nevertheless.

Then I did a mixed media piece for the show with Thom. He took pictures in Hawaii of the hula, including this one of a girl's feet. I loved it immediately and tried to paint it in oil several weeks ago. I didn't like it, so tried watercolor. The paper I used was impossible, so I added pastel over the painting. It's the first mixed media thing I've done that I really like. 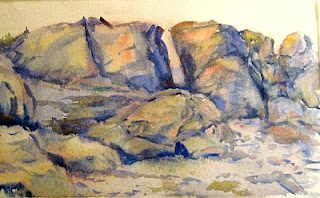 Posted by Cheri Walton at 5:25 PM No comments:

Thom's photo on the left inspired me to try three different versions. It was fun to cut the woodblocks into so many different shapes and I like the results. The first one is a reduction print, the second is the woodblock printed over a gouache painting, and the third is the same block with chine collee. I wanted to see what it looked like to put the more color on without destroying the block as you go along. The last two are very small.

I haven't written much about what is going on in my life lately simply because nothing is going on but this artwork. I spend all day in my studio, flinging work after work on the floor and starting another. I even moved the dogs' old beds up there so they could be comfortable staying with me while I worked. I like being so absorbed. so focused.

Posted by Cheri Walton at 2:14 PM No comments:

Patrick and his Toys 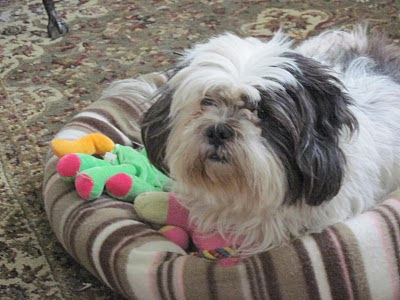 Posted by Cheri Walton at 1:38 PM No comments: 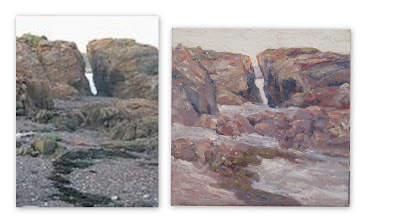 Looking through Thom's photos yesterday I came across some pictures of Split Rock, which is on the Passamaquoddy reservation a couple of miles down the road. I hadn't seen them before and was really wowed by them. I asked him about using them in our show, he responded in the affirmative, and I went to work. Once again I am thrilled with the results. I am really on a roll. Having a project like this is great for me.

I plan to do other work from the pictures.....they are beautiful and powerful.......wonderful representations of a sacred place.

Posted by Cheri Walton at 3:48 PM No comments: 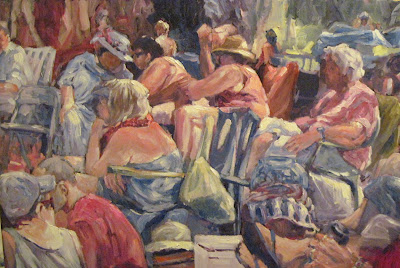 Here is the final product of the painting from Thom's photo. I'm very happy with it right now. I kept myself from over doing it by placing a picture from "American Art Review" beside my palette. The painting I kept comparing this with was very rough....so rough you really couldn't tell what the subject was. I admired the brushwork and thickness of the paint, trying to keep from picking at my own. It's really quite painterly close up, though it's hard to see it in this photo. It's big.......about 30 x 40.....painted over another painting I once did that was ready for recycling.

Now it's time to move on to something else. I already have the next painting in mind.

Posted by Cheri Walton at 5:52 PM No comments: 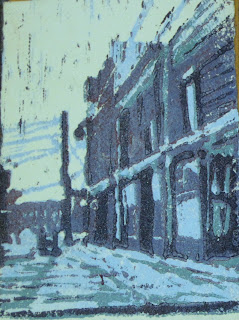 Here's my newest try at reduction printing. Though not perfect, my registration is much better, especially considering I rubbed the thing with five different colors. I made an "edition" of four, but two of them are unacceptable just because of my cavalier attitude. I still don't have printmaking paper, so I used watercolor paper. The texture of it isn't conducive to making hard lines. I'm happy with the improvement I've made, and this could be the end of my career in this kind of printing. Once I know I could do it if I persisted, my enthusiasm starts to wane dramatically. It's a tecnique, and I'm not sure it really serves my purpose

Posted by Cheri Walton at 6:50 PM No comments: 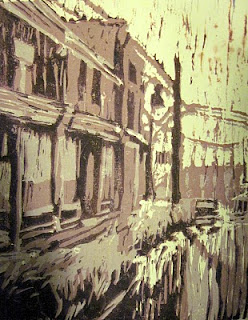 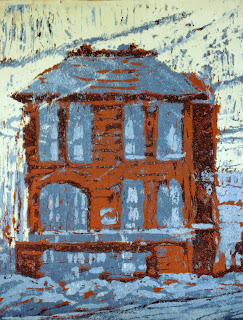 The idea that I wasn't able to wrap my mind around the method of reduction print making has been sitting very uneasily on my mind. I find it very difficult to accept being incapable of doing something I want to do. The other day I was looking through the Utrecht supply catalog and saw what I knew to be a reduction print someone had used as an ad for printmaking supplies. I studied it and studied it, then tackled my own. For two days I have worked my fingers to the bone, almost literally, on these two prints. I even made editions of four of them to gain experience with the process. Admittedly the results are shy of fabulous, but I think I have conquered the tecnique. I used very hard wood and non-absorbent paper, both of wich contributed to the difficulty of cutting and printing a clean image. Obviously, registration is a distinct problem..........

Nevertheless, I have saved myself once more from having to admit defeat.

Posted by Cheri Walton at 5:43 PM No comments: 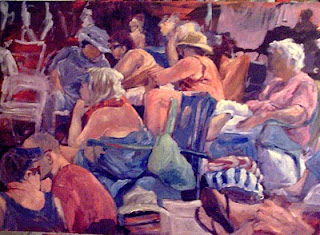 I worked on the painting for a few hours today and am moving along. Haven't ruined it yet, but going in that direction. No matter how hard I try, I'm still me.. 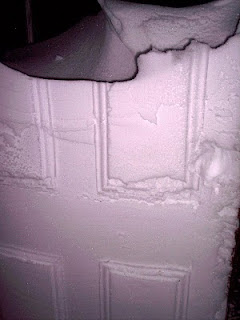 Here's what faced me and the dogs when I opened the door to let them out into their yard. I've shoveled that doorway three times today, too, and each time I open it to another wall of snow. Needless to say, we all had to go out the front door, which was at least passable, but the snow was too deep to go for much of a walk. Besides, the snow and wind is making it pretty uncomfortable out there. I guess winter has arrived. 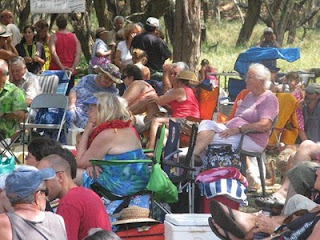 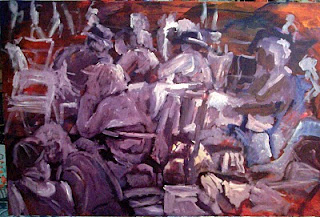 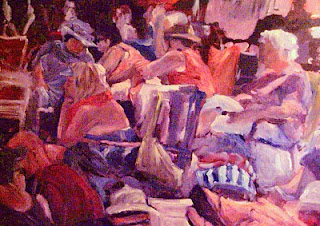 It occurred to me that I ought to photograph a painting from its origins and see if that will allow me to isolate the stage when I should have quit. I almost always go beyond the painting's optimum point, but you can't ever go back. Perhaps if I record the process I will be able to catch future paintings before I push them over the edge.

Thom and I are gong to have an exhibit at the Rose Garden in May where he shows his photographs and I show my paintings of them. This is my first shot..........a photo he took in Hawaii. After I sketched it on the canvas (which is much bigger than the photo) I took the first picture. I don't do a line drawing to start, just a value study, more or less. That's the biggest and most important chore of a painting..........to orgainize the patterns the lights and darks are going to make. I always consider the abstraction of the painting to be the bones of it. Whatever you put on top of the bones will turn the abstract into strokes that remind the viewer of something they recognize. The problem is how much to organize the strokes and values. How much the viewer should be considered is always a challenge. How much do I manipulate what my brushstrokes make the person who looks at them think of? How far do I remove my process from my audience? So often it is pushed into the background so far that all that is left is the subject of the painting, say a sunset, seen through the filter of all the sunsets the viewer has ever experienced or imagined. Most people judge a painting by how little it looks like paint and how close it comes to looking like what it represents.

Well, anyway, once I have all the shapes and values making a design that I like, I start to dress it up. As I used to tell my students, "now all I have to do is paint the painting." Thom has snatched a split second that will never happen again. It's why I like to paint from photgraphs.........especially if somebody else took them. That one second is recorded. Once the second has passed, it no longer exists. Thom owns it. He grabbed it out of a second that surrounded him and no matter how many other cameras recorded that moment, none will be like his. Then, he offers his singular version of that moment to me. I interpret it from a completely different point of view. I look at the scene with edges that confine it to a rectangle of a size determined by Thom. I see feet without people attached to them, faces without heads around them, hands anchored to the edge of a piece of paper, a knee that lives between two other knees, flat and still. I am painting those shapes, removed far from Hawaii and those humans who happened to be in front of Thom's camera lens. What a trip!

No wonder reality is too hard a concept to grasp.