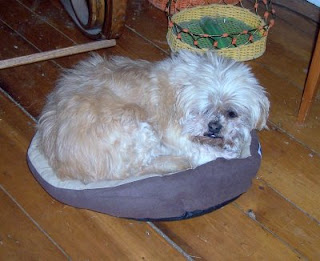 Lytton is getting better now, but I have been preoccupied with him for the past several days. He was in a lot of pain, crying out every time he moved. I called the emergency number for the vet in Perry and braved dark and ice to drive him there after hours. Once we were there, Lytton acted as if nothing were wrong and the doctor dismissed us. At my insistence, he gave me some pain pills and muscle relaxers. We (all the dogs and me) were awake most of that night because of his misery, which returned as soon as he left the clinic.

The next morning I called my sainted vet in Bangor, who diagnosed him over the phone as having a slipped disk. He approved the medication he was taking and asked me to call the next day. All I could do was hold Lytton in my lap, listen to him whine, and wipe the tears from my face. Always disaster-oriented where he is concerned, I envisioned paralysis at best, death at worst. As the day wore on he improved enough to stay quiet unless he moved. That night he slept better and so did the rest of us. Since then he has improved each day and is now almost back to normal.

As he regains his health, my thoughts shift from his impending death to relief that he is better. The relief is shallow and skewed, tainted by the the ever-present cloud that seems to taunt me with the whisper, "Not this time."