Fall and the Beach 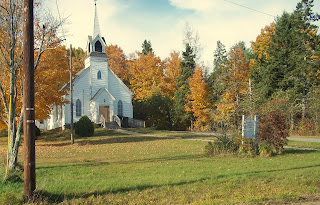 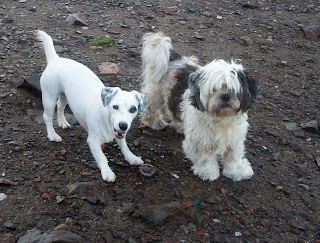 This is October and the road to the horse shelter leaves no doubt that Fall is in its full glory.  I took this picture on Shore Road about a week ago ,before Eastport actually showed much evidence of the change of season.  Since we are an island, influenced more by the ocean than the mainland is, the seasons change later. There is about a two week window where we lag behind as if reluctant to give up whatever season it happens to be.  Our tulips are just blooming when the ones in Calais have already gone by, but our trees stay green after the others have turned red and yellow.  We still have rain that hits the mainland as snow.  On this end of the year it is a blessing, but we envy the greening leaves elsewhere in Spring when ours are still bare.  Right now the trees here are just beginning to turn color, but elsewhere they are beginning to turn brown and fall, dry and crinkly, to blow over the roads and fields.

Mike has suggested that I move to Florida near him, where the sun shines and I would always be warm.  For a couple of days I considered the idea, imagining myself lounging by the pool of my new apartment complex, surrounded by landscaped gardens, fountains, and Palm trees.  Rents are cheap there.  For what I pay here I could live in the lap of luxury, albeit a very small lap.  The manicured lawns in those communities are a special kind of grass that resembles astro turf, thick and tough.  We consider a "lawn" anything that isn't dirt or pavement.  There is no such thing as a weed........anything green counts as grass. I thought about it as I hunched in my two sweaters and sweatpants under a blanket on the couch.  In fact, I agonized over the idea for days.  Eventually, though, I came around to what I knew all along was the case.  I am here and will stay here.  I love every inch of Eastport.  I belong here.

To solidify my conclusions, I took Willy and Patrick down to the beach to play.  Looking out over the rocks and seaweed into the huge expanse of ocean is always intoxicating.......in a way that other beaches are not.  For one thing, I am the only one there.  There are no beach chairs and umbrellas, no tanned bodies in skimpy, unflattering bathing suits sprawled on blankets.  No coolers and iced drinks.  It's a beach indifferent to human presence.  You get a good lesson of where you fit in the scheme of things on my beach.  There is something very humbling and comforting about confronting  your own insignificance.  The beaches in Florida give you a sense that they were made for you to enjoy.  The evidence of humanity overwhelms them.

Meanwhile, as I contemplate my place in the universe, Patrick and Willy run full speed over the rocks, loving their freedom.  Willy confronts the water, steps into it, sniffs and then tastes it.  The small waves slap against his legs and he takes off, only to challenge it again, following the waves as they recede, and then jumping back as they come in again.  Patrick is not so brave, but he buries his nose in the seaweed and brings up a sea urchin, or a little shell.  He runs down the beach and back again.  He picks his way up the huge mound of rocks that are exposed by the low tide.......Clark's ledge...looks out over the sea.

Why would I ever leave?
Posted by Cheri Walton at 11:11 PM

Thanks for sharing such an interesting information.