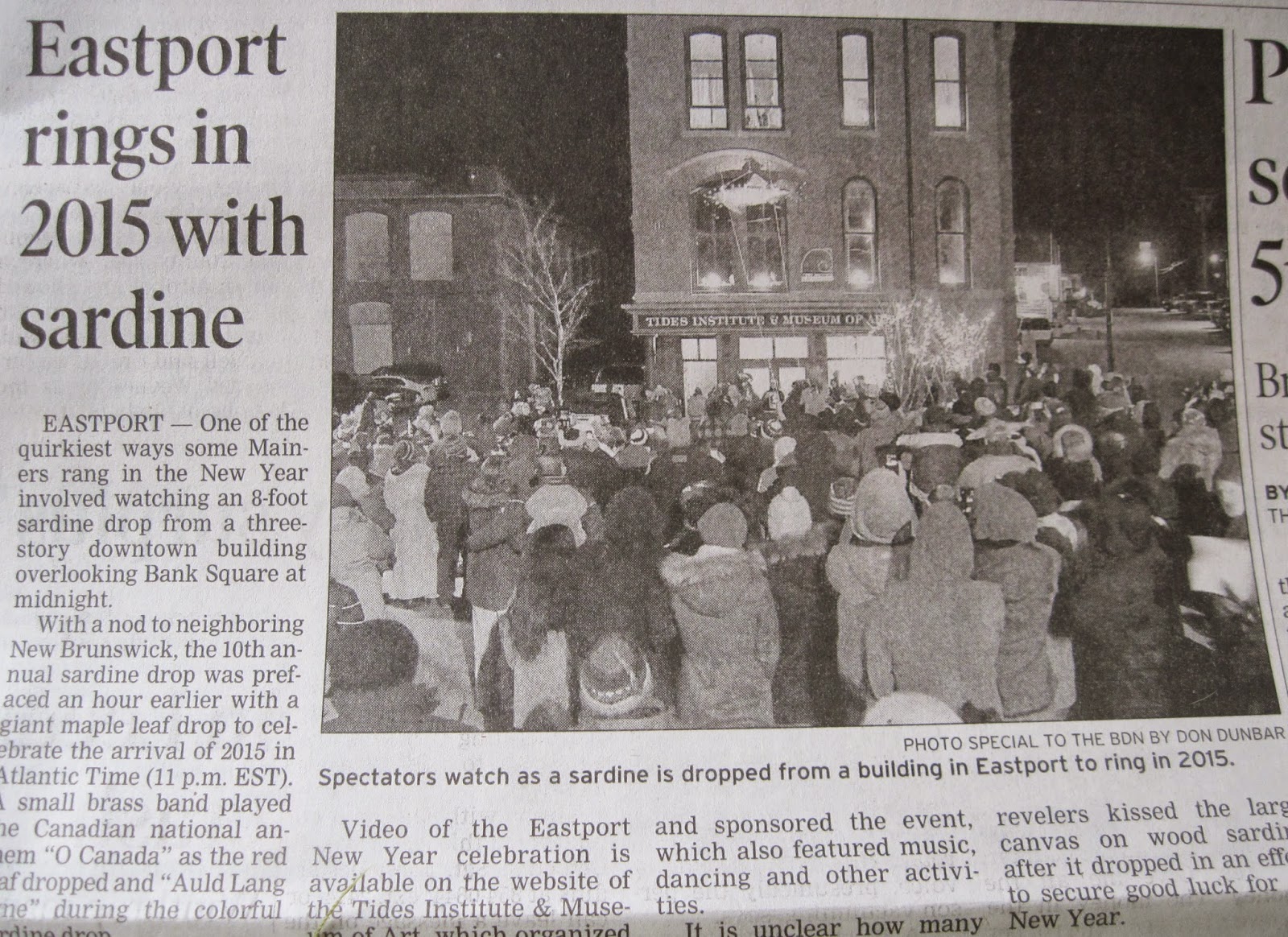 Eastport's New Year celebration has been famous for several years......actually since the first time 10 years ago.  It was so quirky that the Boston Globe actually picked up the story.  It still gets a nod from the Bangor Daily News.  There are tourists who come here to be part of it, and certainly the natives love it. I have not participated in the festivities for quite a few years, but I loved it when I did.  Now it just seems like too much trouble to bundle up and brave the cold.  I was up at midnight, cozy in my bed with my two boys, watching the Times Square celebration on TV because other programing had been interrupted for it. Of the two, I would have much preferred to see Eastport's salmon drop. Luckily the coverage was brief and my late-night talk show resumed.

I don't know when I stopped being affected by the coming of the new year.  As a young person I used to cry when I heard "Auld Lang Zyne"...I don't know how to spell it, but I know that's not it.  I also cried when the Star Spangled Banner was played, along with a host of other things that stirred my overly sensitive emotions.  Many of those reactions continued well into adulthood, but now I am mostly unmoved by contrived stimuli.  My Pavlovian conditioning has faded with the passing of the years...for which I am thankful.  I remember a period when I actually felt murderous toward the movie-makers who intentionally evoked the angst I could not control. (example: Born Free.)  I was so affected by Bambi that I never dared try to read it to my kids.  Just as well........they would have been traumatized, too.  Now the only thing in the media that reliably brings me to tears is the pleas from the Humane Society if the United States.  When I see it coming on TV I have to close my eyes and cover my ears. I have failed to desensitize myself, and even a glimpse of the ad sends me spiraling down.

Well, it is almost my 70th birthday.  I guess it is pretty hard to consider myself anything but old, though it doesn't seem to bother me.  It is like New Years....a day that marks a day.  Every day has the same history, coming every year as it does.  It's somewhat of a surprise to me that I feel no different than I did from the time of my first memory of myself at 18 months old.  That same "me" that has always been is in tact.  It's the same person who saw herself as a kindergartener in the mirror on the way to the restroom at Hannibal Hamlin School, wearing an eye patch.  Same person who went to the senior prom in a red formal dress and long gloves.  I don't even remember ever having a different thought process.  The baby who looked at the lighted waterfall at Cascade Park, grandparents on both sides in the scratchy front seat of their beige  '47 DeSoto, is still, with minor adjustments, the same.  It raises the question of individuality....one mosquito may take a bite of human flesh whiles another one gives it a pass, but they are still both mosquitoes.  Differences are all in the details.
Posted by Cheri Walton at 7:36 PM

Cheri, I love this post -- and whenever your birthday is, I wish you happiness on that day, as well as throughout the coming year -- which is so TIMELY for me in more than one sense, as I spent an hour this morning reading pages of Proust's TIME REGAINED, nearing the end, only to begin again at the beginning, because it feels like one of the best uses of time this winter.

Cheri, I misspelled your name in my post but mentioned you on Books in Northport today. Go see!

Happy New Year Cheri. Sorry I never made it to the salmon drop-what a hoot! You inspired me to do something with the flower print origami paper I've had for years so created a mobile of paper cranes for John's latest offspring. Have to admit needing to practice on 10 or so before getting one right. Kudos to you!