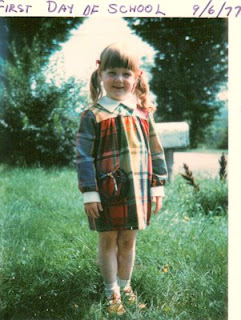 As I was trying to organize my studio and put away my summer clothes, I came across some audio tapes. I put one in the cassette player to see what it was and heard the voices of our long ago family at the dinner table in Newburgh. Carrie had just started kindergarten. She looked then like she does in this photograph taken in 1977.

What a traditional family of the day we were.........father, mother, and two children, a girl and a boy. We had two dogs, too, and a cat. I stayed home with the kids and Phil worked. That ideal was just beginning to go out of favor. Woman were starting to feel uneasy. A few got married and kept their own names. A few worked after the children were born, feeling guilty. It was the time of "women's lib," a term not quite understood by most. I hovered on the edge, having been brought up to think that a woman should be a housewife. Before marriage, though, I had been a professional with an office and a secretary, my own telephone extension........ I was never quite comfortable in my stay-at-home role, but could not imagine leaving the upbringing of my children to someone else. I panicked every time I thought of it.

Listening to the sound of those voices this afternoon took me back to long days of "itsy, bitsy spider" and "Mary had a little Lamb." In her five-year-old voice, Carrie recites nursery rhyme after nursery rhyme. Phil and I cheer her on. We discuss her first day of school. I had almost forgotten what a precocious child she was, how well she expressed herself. I forgot the relationship we all had, laughing and talking together. I don't remember Carrie so gentle with Jesse, age three, coaxing him to talk into the microphone. He consistently refuses despite Carrie's efforts. Finally she says, "Daddy, let's just let him do what he wants." But she keeps trying, patiently trying to think of phrases he might be willing to say. Finally she hits it........"Hey, man, what'cha doin'?" Apparently they slap hands as they say it. There's lots of laughter and praise.

I often remember myself as an inadequate and indifferent mother. I watch families on TV and feel terribly inferior to them, wondering what havoc I wreaked in the psyches of my children. I think of them unhappy, sullen, quiet. I discuss motherhood with my friends and find myself wanting. Hearing those tapes has unburdened me somewhat. Listening to them I hear happy, outgoing children with their own minds and preferences they are not shy to express. It's possible I wasn't such a terrible mother after all.

As the dogs waited irritably for me to get their supper, I sat with my earphones on, listening, remembering, laughing, and falling in love with the kids all over again.

I am too young to give advise. I think you probably were a great mother. I think it is very stressful to be responsible for people other than one's self. We look into other people's lives, and we think they are happy, and we get stressed out. We forget that it is always greener on the other side. I think you are like me, a "perfectionist". We don't get satisfied with anything less than perfect! Sometimes, it is good because it motivates us, and pushes us forward. But other times, we get discouraged, and we start to look down on ourselves as failures. I am at work, so I have to go. I just got moved by your memories and wanted to share my thoughts.