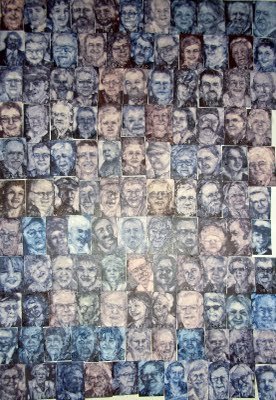 These are all my faces from the obituaries. The flash has made the color lighter in the center, but certainly this is about what it looks like. The piece is about 22x30. The size was determined by the piece of foam core I found and could afford at Walmart. Once I had it, my desire to go on and on disappeared. I had my eye on the end, and worked toward it. I will have to re-arrange the pieces somewhat because I want no white showing between them. Since they are not exactly equal in size, they have to be arranged to compensate. Otherwise, though, I want a feeling of total randomness......though the "randomness" will actually be by design. I want no sequences, no discernible patterns by gender, age, or color. The difference in color of the individual portraits is an unexpected variation I didn't plan for. I expected to have them all simply black and white. But since I do not use black paint, every time I mixed a black out of red, yellow, and blue it came out different. That's the advantage of mixing black rather than using commercially mixed black, which is dull and too consistent. I thought I would get it closer than I did, though. Now I'm glad I didn't.

On a much sadder note, all three of my chickens were killed by a predator last week. I was stunned and devastated. For a few days I thought in my grief that I would not get more.....end that part of my life. But as I began to recover, I was less convinced, and then on my way to Calais found myself stopping at the feed store to see if they were going to get baby chicks. When the answer was yes, I ordered three. They will arrive in about a month. Having chickens is part of my identity, my idea of myself. I'm not ready to make a change, I guess. So while I wait I will try to prepare a better fortress for my new babies. So far I have obviously not been able to keep danger away, no matter how I try. But I will try again...

lindy by the sea said...

I'm so sorry to hear about your chickens, Cheri. We have been very successful keeping predators out of our pen and coop. Feel free to stop by sometime and take a look. Maybe we could brainstorm some ways to keep those pesky predators away from your sweet girls?

lindy by the sea said...

By the way, I love your latest project.

I really love all of your projects! You have a fantastig ideas!! Good job!

I really like your obituary paintings. I like even the idea of it... Amazing artist you are...
So sorry about your girls..God, it is SO sad when something like this happens.. I remember when we had chickens in Glenburn..same thing, an occasional event, but each time it was horrible.. never got used to it...