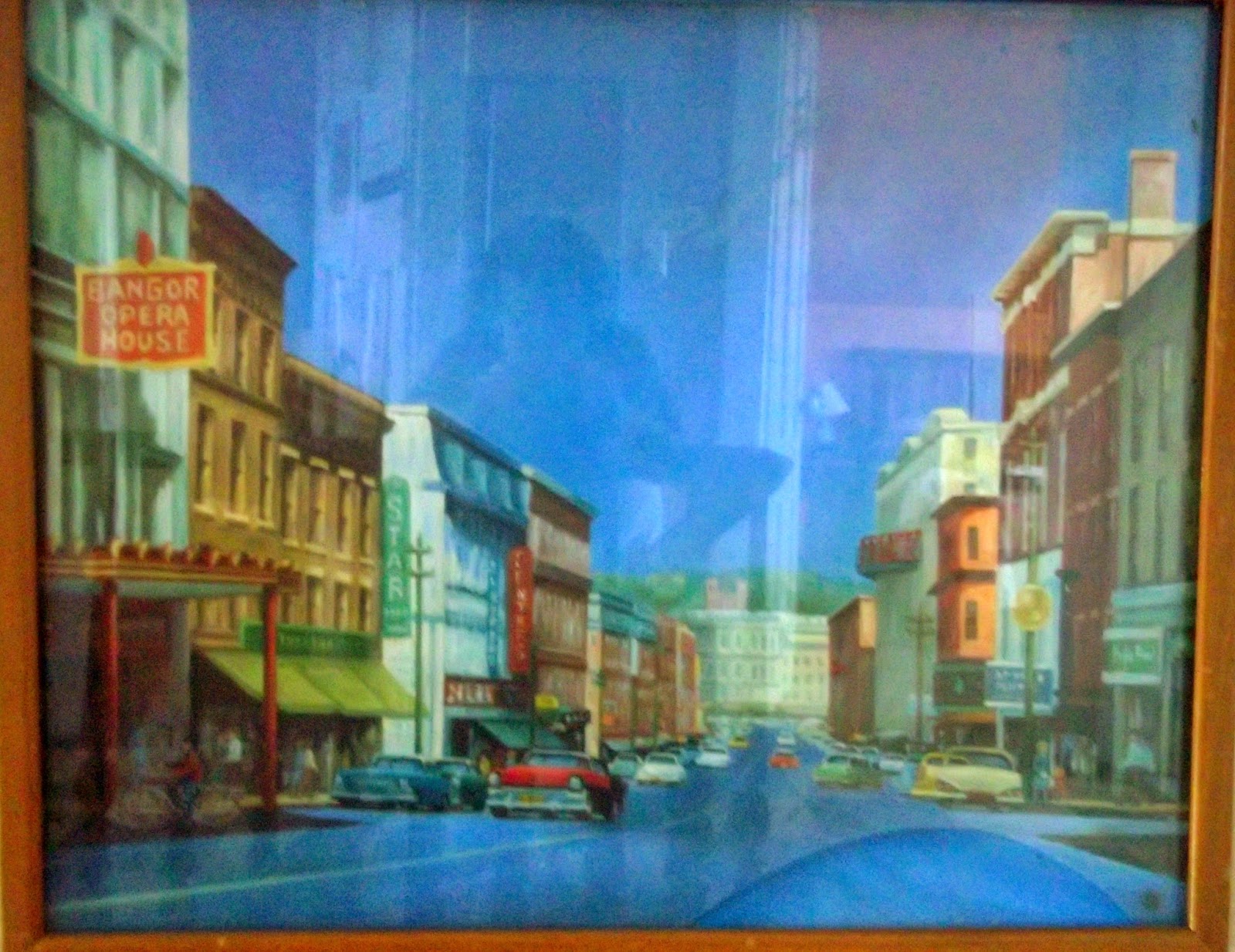 This is a painting of  Main St  in Bangor that my mother painted in 1957.  She used the image from a postcard, but she added our family car, a 1957 Ford convertible, and my brother riding his bicycle.  This is where I was born, where I grew up among relatives who had also been born and raised there.  I was married there, worked there as a social worker at the Bangor State hospital along with my husband, my father, and my uncle.  I raised my own two children there.  It's appropriate that in the picture my ghostly silhouette fills the sky, reflected by the glass as I took the picture.

I moved here to Eastport, alone except for my three dogs, in 1987.  I arrived in the middle of a huge snowstorm, bidding good-bye to the movers who pulled cautiously away after unloading my worldly possessions.  It was a bewildering experience and I felt loose in the world, questioning my decision to be here constantly.  Well, the rest is history, as they say, and here I am.

But Lately I have been thinking about moving back to Bangor.  It seemed to me that it would be going "home."  These past weeks the thought has dominated my thoughts.  I even found a place to live, where I would be warm in the winter, which is an increasing priority for me.  I would have a real shower, modern appliances, access to public transportation, close to galleries and plays, restaurants and little coffee shops.  I would have friends.....the same ones I had before I left, other artists and opportunities to join the art community that has become unavailable to me here.  I would miss the ocean, but the city is on a large river that is within easy walking distance to where I would live.

All of these thoughts escalated to the point where I was at the very threshold of making the decision to go.  Then, as I went out to put my chickens in their house last night, the idea flew out of my head as if I had suddenly awakened from a dream.  As I looked around me I was overwhelmed and mystified that I could ever think of leaving.

I have felt like an outsider here since I was denied admission to the gallery that was so much a part of my life and identity.  The other members were my friends and I had a place in the community.  I believed I was liked by people in the town. Now I am isolated, an outsider, as I was when I first came here.  I see, though, that I'm not ready to turn around and go back home.
Posted by Cheri Walton at 12:15 PM

It’s interesting to hear someone else wrestling with the idea of “home” – what it is, where it is, where one’s friends are. I can’t imagine ever moving back to the town where I spent ages 3 through 18 but sometimes think about the place I lived from ages 22 to 39, where a few family members and some very, very good old friends live. I miss being able to see them easily and frequently. Where I live now, though, is definitely home – the old farmhouse and country neighborhood that I can’t imagine giving up.

That insider/outsider dichotomy is something else again. Sometimes I feel like on the inside (I live here; I’m a “local”), but often I feel like an outsider, as one not native to a small community never becomes native, no matter how long the residence or how deep the involvement, and because I live in an area of the country with a median income much, much higher than my own, I often feel marginal, at best. But sometimes too I feel like an outsider in my own biological family, as well, or in a group of close friends, and I wonder if many of us don’t have that disjointed, semi-alienated feeling that we don’t quite, completely, unambiguously belong to any group. What do you think?

As for belonging to a place, I have no ambivalence or uncertainty about my belonging in and to Michigan. Years ago, spending time with an elderly woman from another part of the country whose mental life was all lived there, in memory, I realized that it would be very important for me to spend my old age in Michigan, where I can share place memories and stories even with people who haven’t known me all my life and where I know the names of the trees and the wildflowers. And I feel strongly that I belong to the land of my country home and the land surrounding it, despite the fact that neither my husband nor I have earlier generations who lived here.

Are you sure you are isolated? Maybe you yourself are in retreat at present. I go through phases of that. (Dogs are great medicine! I’ll bet chickens are, too.) Feeling excluded is not a good feeling. I’m sorry about that gallery thing and hope that changes for you – or that you find a local gallery to welcome you.

Sorry to go on and on so long, but this is something I think about a LOT, as you can probably tell. I see a whole tangled nest of questions and themes. We -- all of us -- probably put way too much weight on outcomes that are not the whole story we load onto them. Well, does that even make sense? I can't rewrite it....