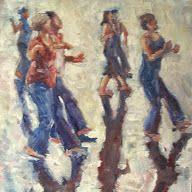 *
Well, Christmas was a big zero this year, thanks to the fact that I wasn't interested in doing anything in particular.  I did talk with Jesse (my son) and his wife via Zoom........what a trip that is!  My daughter didn't do much either, though we did talk.  We talk every week anyway, though.

My reason for posting now is that I have news about my living situation finally.  I had applied to several subsidized housing agencies (as I have in the past and then backed out) and finally reached the top of two very long waiting  lists here in Eastport.  I had thought of going back to Bangor, and I had actually applied there as well.  Still, I guess Eastport has become my home now and it appears it will remain so.  The situation has always been complicated by my insistence on having my pets wherever I go, but this time I managed to convince both places to allow me not only to have my dog and cat (and birds), but to have a two bedroom apartment (which ordinarily one person can not have).  I still don't know which place I will get because of another applicant having not made up her mind which apartment she will take, but both places are perfectly acceptable to me.  They are quite different, but either one will be fine with me.  Both are still in sight of the ocean.

Also, I have again changed doctors, and this one is actually ready to fix my hip.  Basically I decided to dismiss my rather obnoxious attitude that this area didn't have doctors I could trust , and made an appointment with one in Calais, just a half hour from here.  This will make everything so much easier, not to mention quicker.  So I am about to have some big changes.  I hate to leave this house, where I have lived since 1997, but I have to accept that I can not afford to stay here.  I've lived in apartments before, though, and never minded doing so......as long as I can have my babies and an extra bedroom for a studio where I can paint.

Otherwise, life goes on.  I don't know if I've mentioned that an old friend of mine died recently and left me her car.  This, too, is going to be a life changer for me.  The car I had did not run most of the time.  My friend Phyllis (age 98) died recently and left me her car, a Mini Cooper.  It's a great car and I am very happy to have one I can depend on.  I can drive even with my bad hip for short distances and I'm thrilled to have reliable transportation again.  Eastport is so far away from everywhere and has no public transportation, and I am absolutely neurotic about asking anyone for help of any kind, especially transportation.

Your housing news sounds very good indeed. Two bedrooms -- so one can be your studio! -- and having your animal roommates with you. Also having a car -- big plus. I will be glad to think of you somewhere safe and warm and with your cats and dogs and birds.