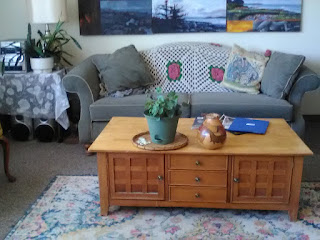 Well, I finally managed to figure out how to get pictures of my new place on my blog.  It turned out, though, that I couldn't really find images I liked enough.  This is hardly informative, but at least it's something.......one end of the living room.  Perhaps another time.....................

There has been no progress on dealing with Mike's death.  We wait for Amber, Mike's estranged daughter, to decide if she wants to be counted as a survivor and therefore sole beneficiary of his estate.  It's hard to absorb the fact that he is all ready to be buried (I identified the remains over the computer) but nothing else can be done until she decides what she wants to do.  His house and all his belongings sit untouched.  It seems to me that there must be a danger of people helping themselves to his considerable belongings.  Probably the police are in charge of that until some decision is made about his beneficiary.

Meanwhile my life goes on.  I have begun a series of paintings of Eastport in the hope that I can have an exhibit at the end of the summer.  When I lived in Bangor I did a series of paintings called "Dog Walk" and every one of them(about 20 paintings) sold at a gallery that exhibited my work.  It was my one minute of fame, I guess, but I wish I still had them.  Money disappears, but paintings last forever. I had three dogs at the time and I called the exhibit "Dog Walk" because I painted scenes that I saw everyday as I walked the dogs in the streets of downtown. They were featured in all the paintings, walking ahead of the viewer at the end of their leashes in front of me, just as I saw them from the rear. If I get it together, I'll call the new paintings "Dog Walk 2".  Elliot will make a good model.

I an wavering a bit on my thought to let Amber have all Mike's inheritance.......just a bit though. I don't think I'm up for the furor.  I'd rather just let it go.